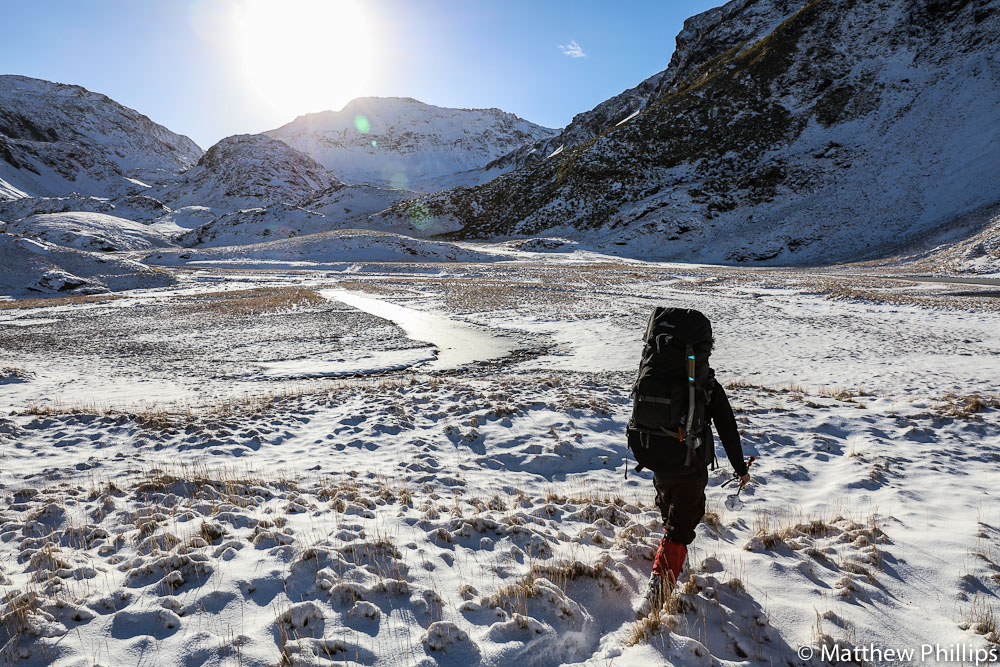 May 8th was my 1,000th day on the island, only a handful of people (lunatics!?) have spent that much time on the island. I was determined to do something enjoyable so Fraser and I planned a trip back to the Barff with three specific peaks in mind. 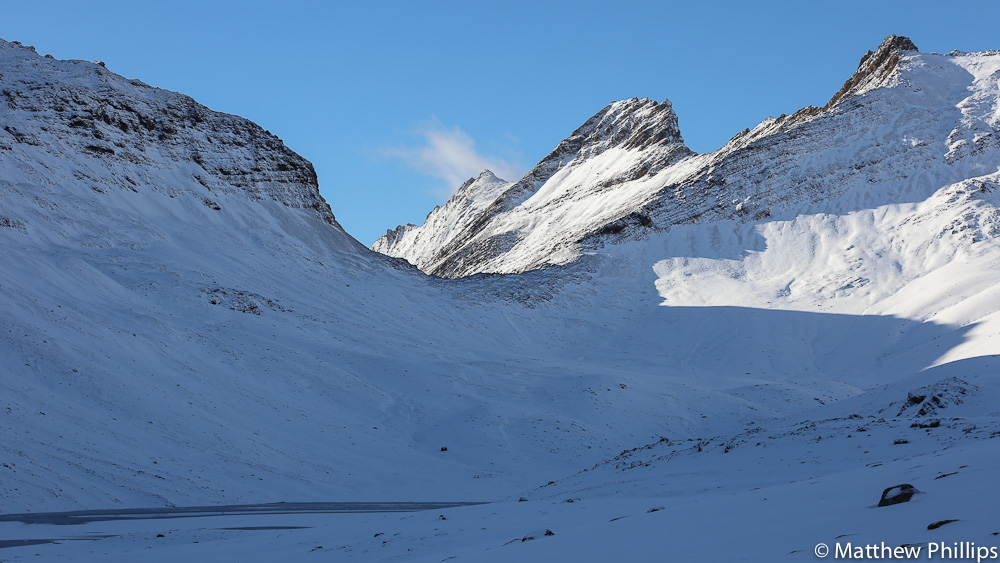 At the top of Pachyptilla valley O’conner peak becomes visible. Approaching from the west there is no obvious route to the summit. From a recent boating trip we had a good look from the east, which seemed like it might be possible. 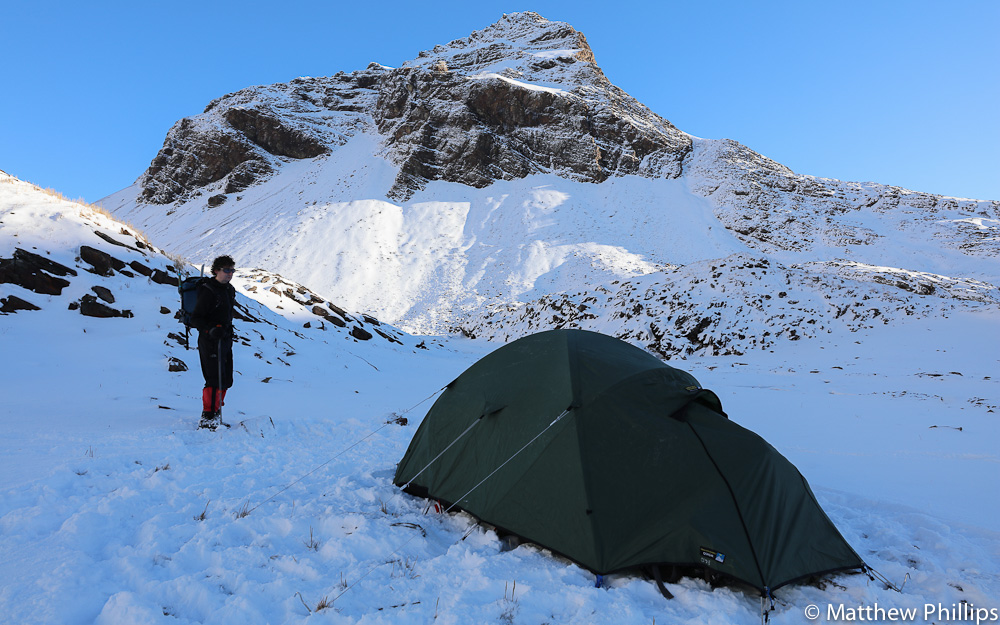 ,O’conner would have been too much to try on day one so we planned to do another peak, then camp overnight and try O’conner the next day. 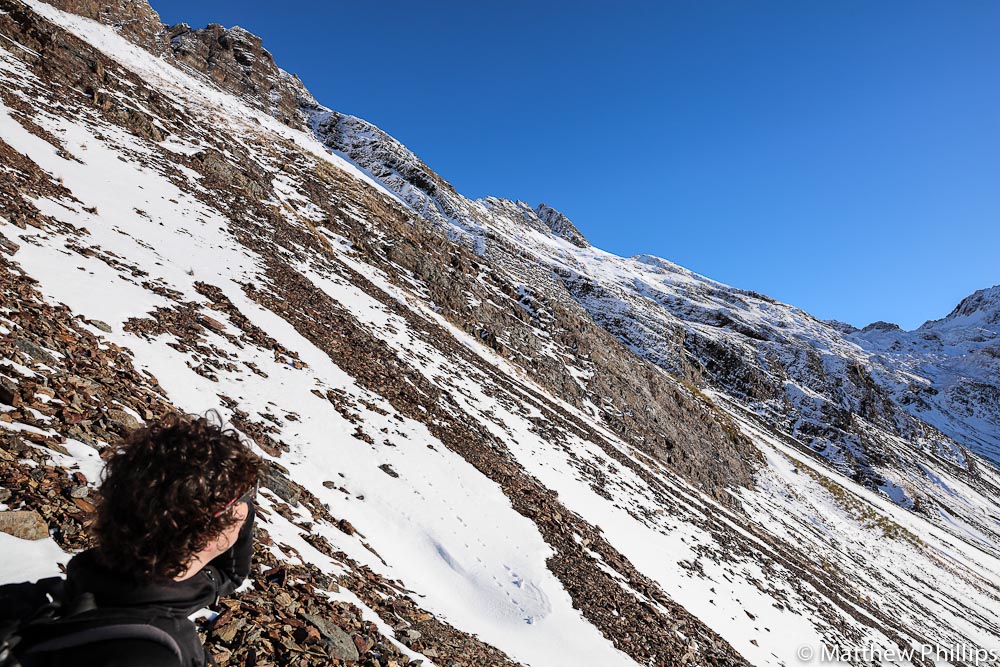 Mills peak was the target for the first day, only a few kilometres from the tent. 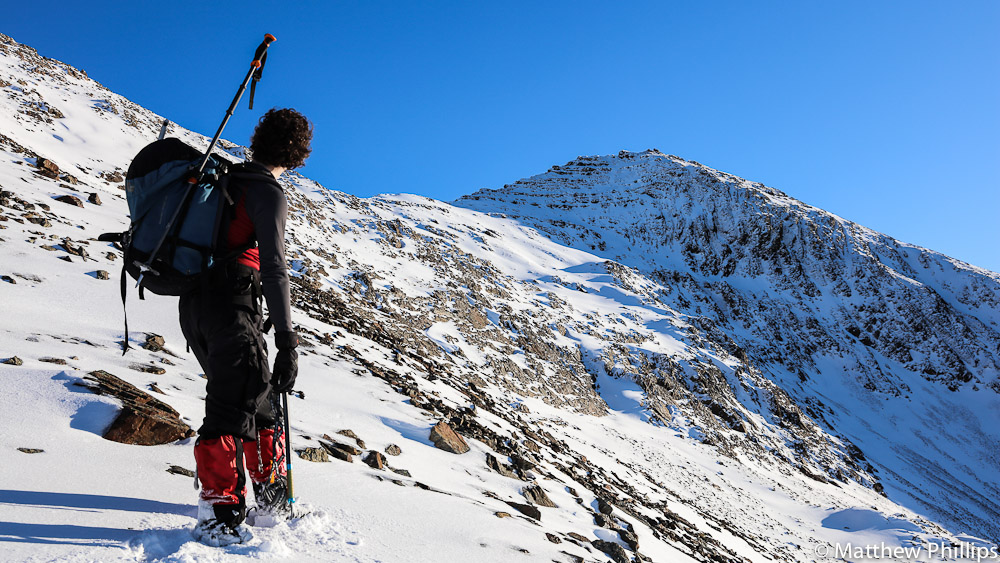 Getting onto the ridge and then heading to the summit seemed to be the way to go, from looking at the map. 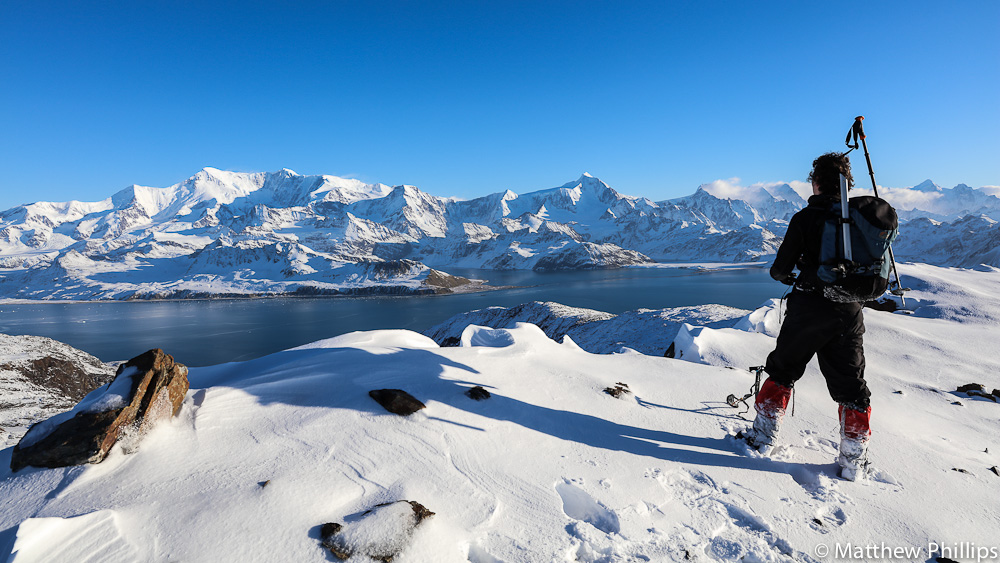 The view from the ridge was breathtaking, possibly the best view I’ve had in my time here. 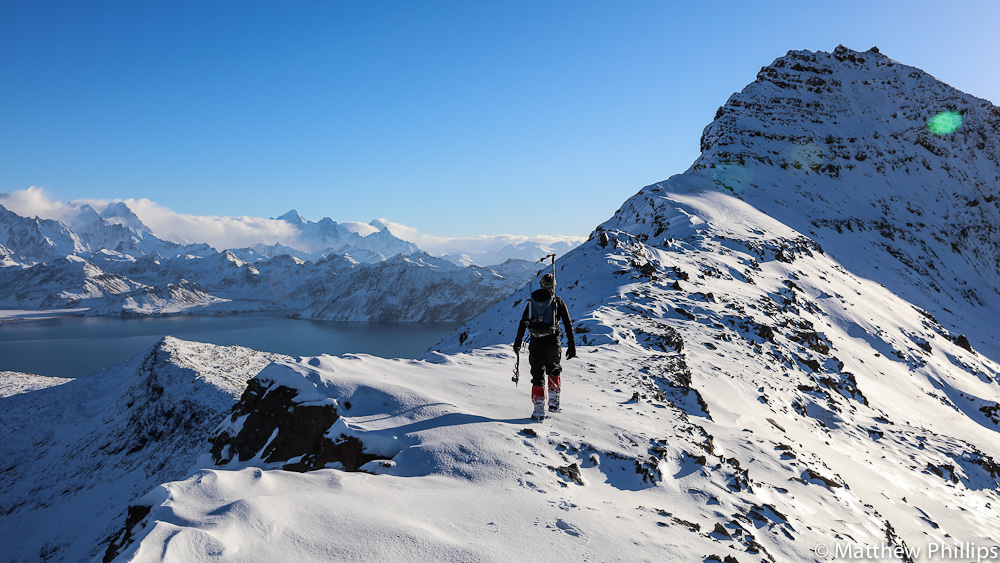 From the ridge the last scramble to the summit suddenly looked a little steeper. 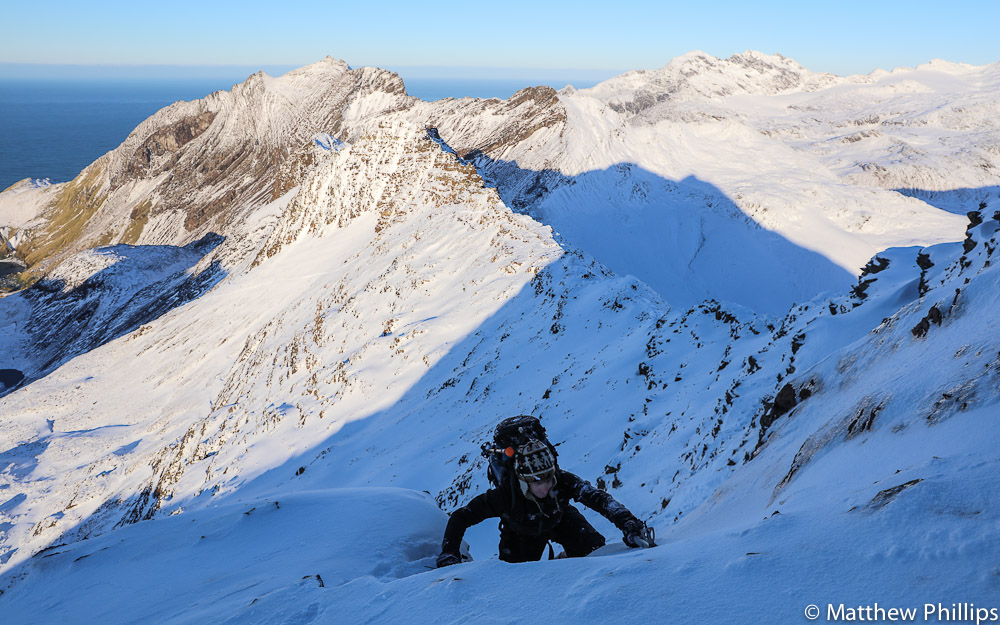 The last few metres to the summit pushed what I was comfortable with, without a rope. 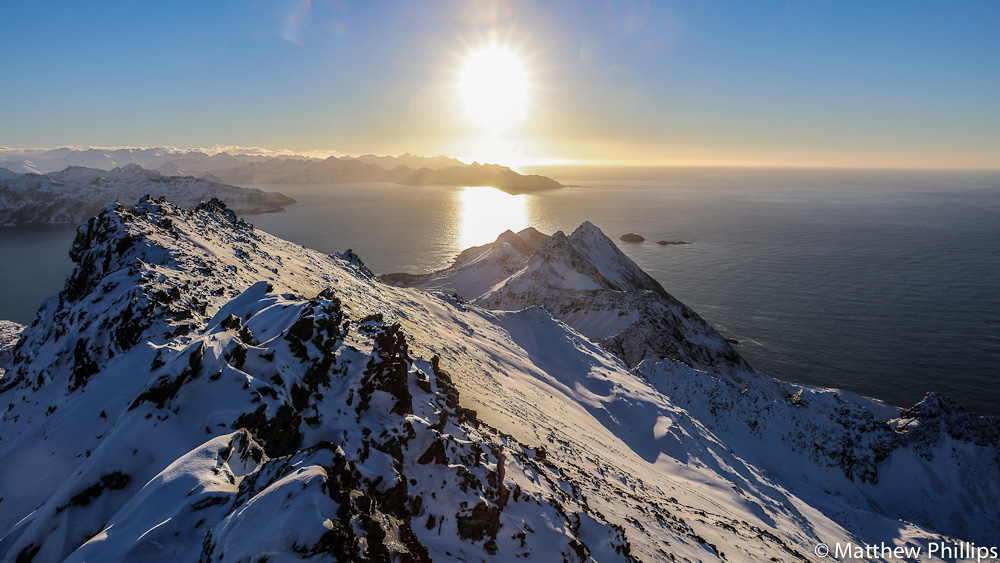 Again, the view was worth it and the other side would make for an easy decent. That’s the Busen Peninsula under the sun, the whaling stations of Lieth, Stromness and Husvik hidden just behind. 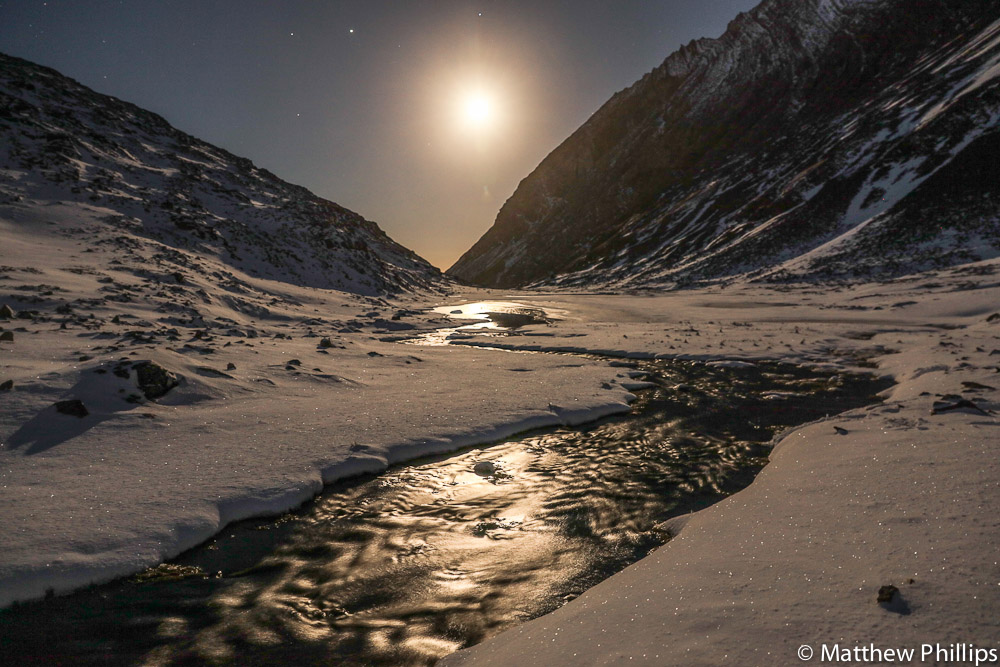 Unfortunately the moon wouldn’t allow a good star shot but it did help to illuminate the terrain. When you are out in the filed you have to call back to base at night to say all is OK and give your plans for the next day. This is done about 6:45pm, just before people on base are about to start their dinner (about the time I’d be opening a bottle of wine if I was staying in a hut). Given the hours of daylight and temperatures I called in from the warmth of my sleeping bag, where I stayed until day light returned. 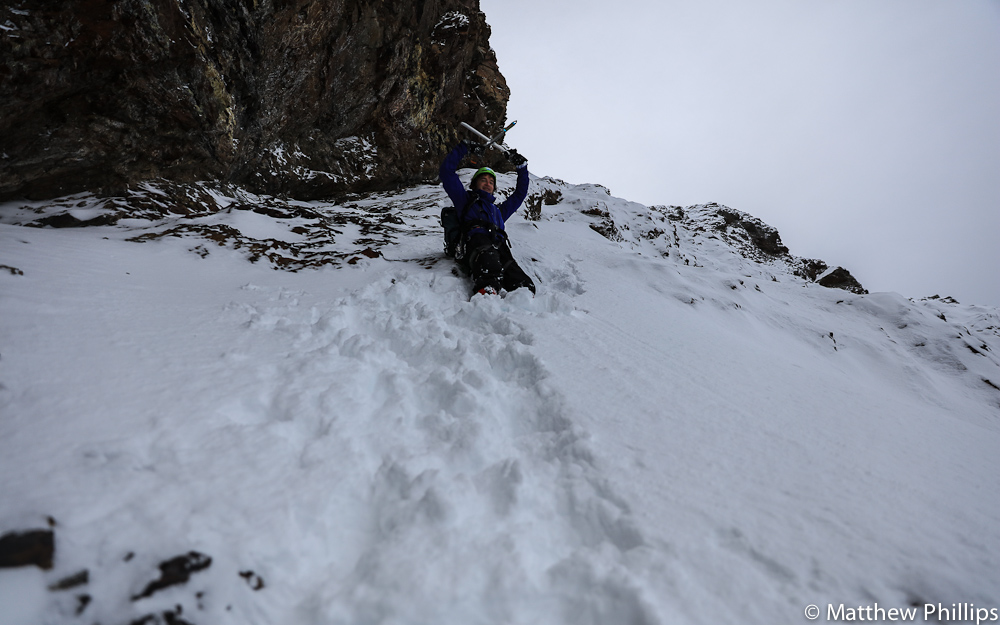 We headed to O’conner early in the morning, the walk in still taking about 1hr and 1/2, from there we had a fairly relentless ascent up a 400m scree slope that was lightly covered in snow, luckily the higher up we got the better the snow conditions got. Unfortunately about 15m from the ridge we had to turn back as time was now against us and the last 15m didn’t look good. 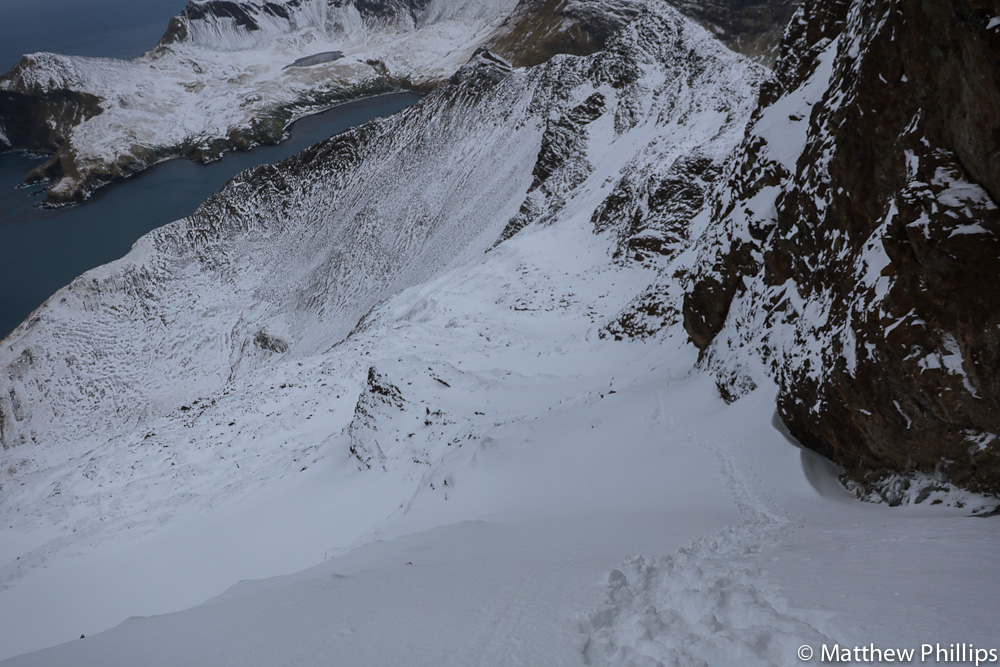 Looking back down the scree/snow slope, the last 150m were probably about 55°. 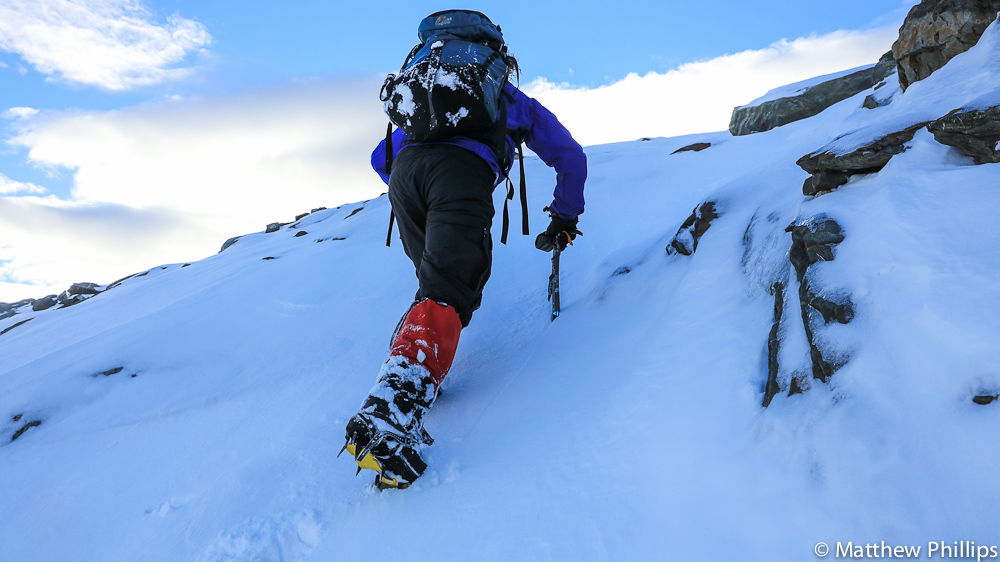 The third day was to be an attempt on Snorre peak (810m) which is above the Szieslasko Icecap and the third highest peak on the Barff Peninsual. There was some route finding to be done, at one point we had to drop 200m to come around and go at it from the middle of the western face. 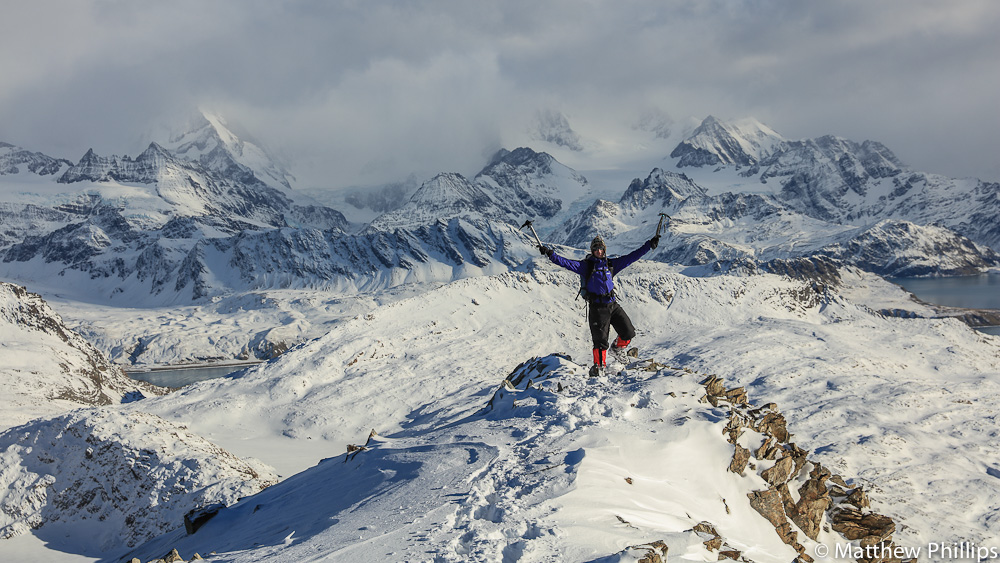 As it turned out it wasn’t too bad, often the terrain on South Georgia looks much steeper than it is (‘South Georgia steep’). Another impressive view looking back towards the interior of the island. 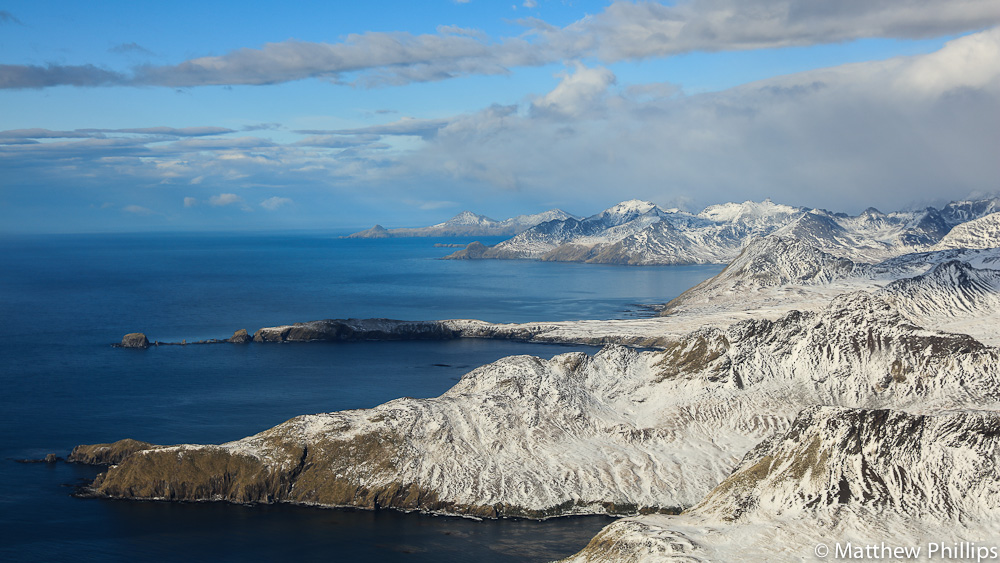 Looking South East towards the bottom of the island. Bottom left is Tijuka Point then Cape Vakop before reaching down to Cape Hardcourt and Cape Charlotte in the distance. 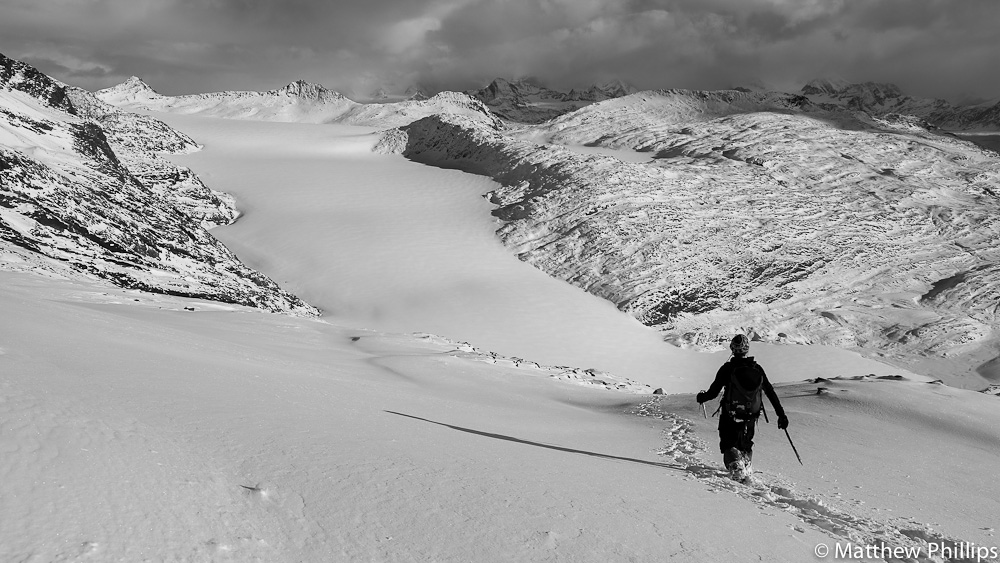 Fraser retracing our steps as we head down to cross the Sizelasko Icecap. Descending was far quicker than we thought, we managed to get back to the hut at Corral 6k (as the crow flies), dropping back to sea level and ready for a pick up, by boat, in less than 2 hours. 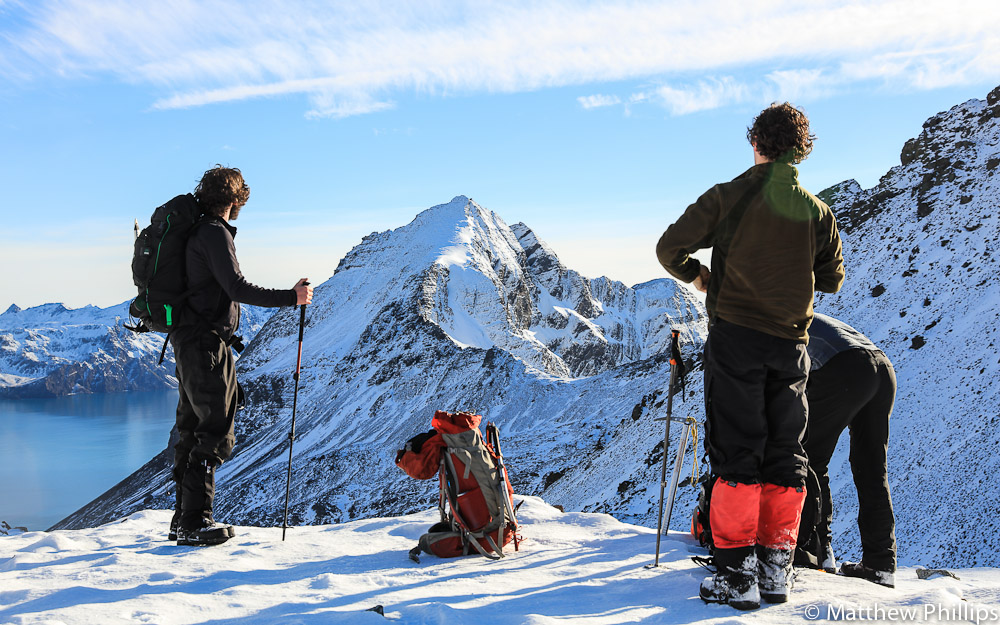 May tends to be a transitional month, so far as weather goes, so to get some snow and it be cold enough for decent winter travel you usually have to wait until late June or even July. One of the last peaks for me on the Thatcher Peninsula to do was Stenhouse, it was in the ‘restricted travel area’, meaning you needed the Station Leader’s permission to go and do it, but that restriction has recently been removed. The theory being the terrain will keep less experienced people away from the trickier stuff. The way up to the summit is by taking the gully directly above my rucksack. From here it’s defiantly an intimidating looking slope. 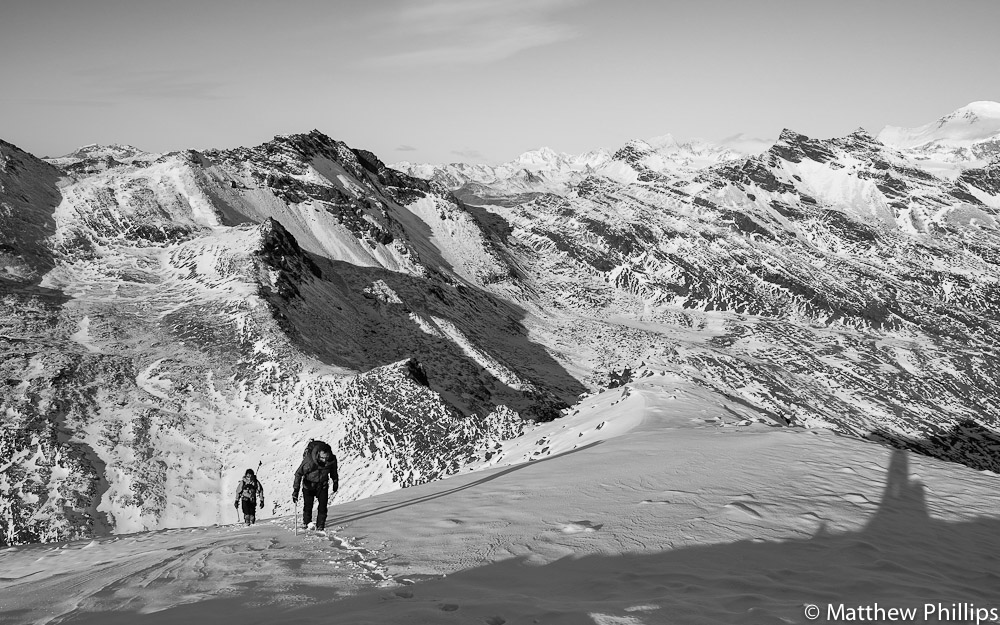 As it turns out it was South Georgia steep. I still had both iceaxes out and had to kick steps up the 150m slope before it levelled out. 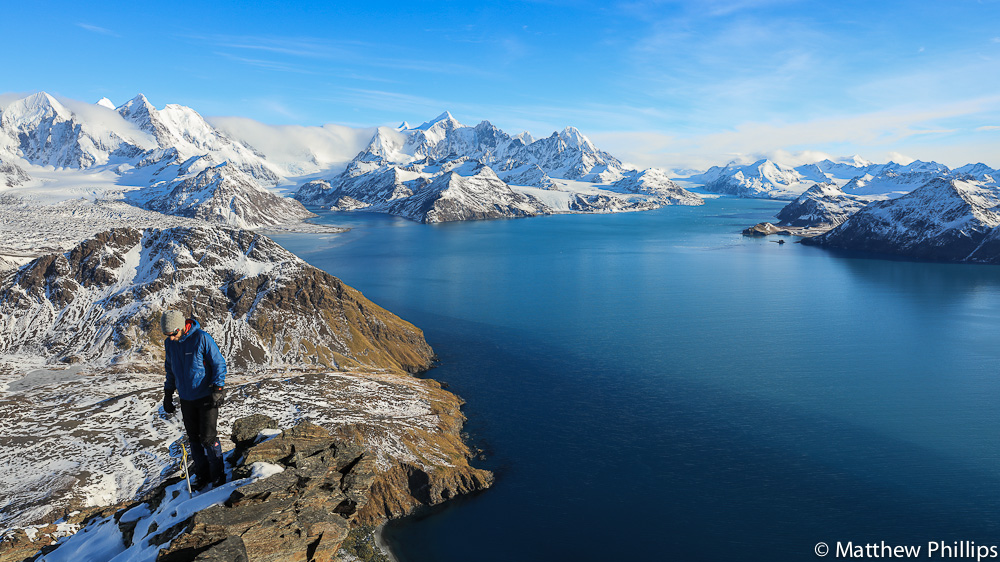 The view from the top was another beauty. Probably the best view on the Thatcher Peninsula. This is looking West into Cumberland West Bay. Mercer Bay leading into the mountains just left of centre shot and the ever growing fjord that the Neumayer Galcier leaves behind as it retreats to the right of the shot. 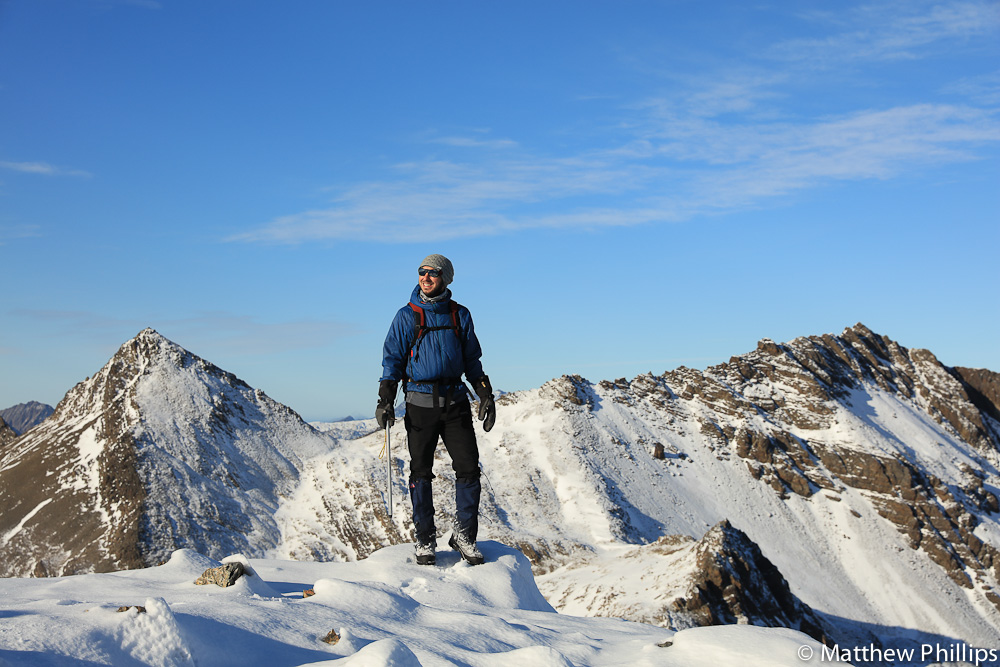 Jerry chilling above the gully. We had time for another peak on the way back so decided to go for Mount Scottberg (on the left here), which was in the rough direction of home anyway. 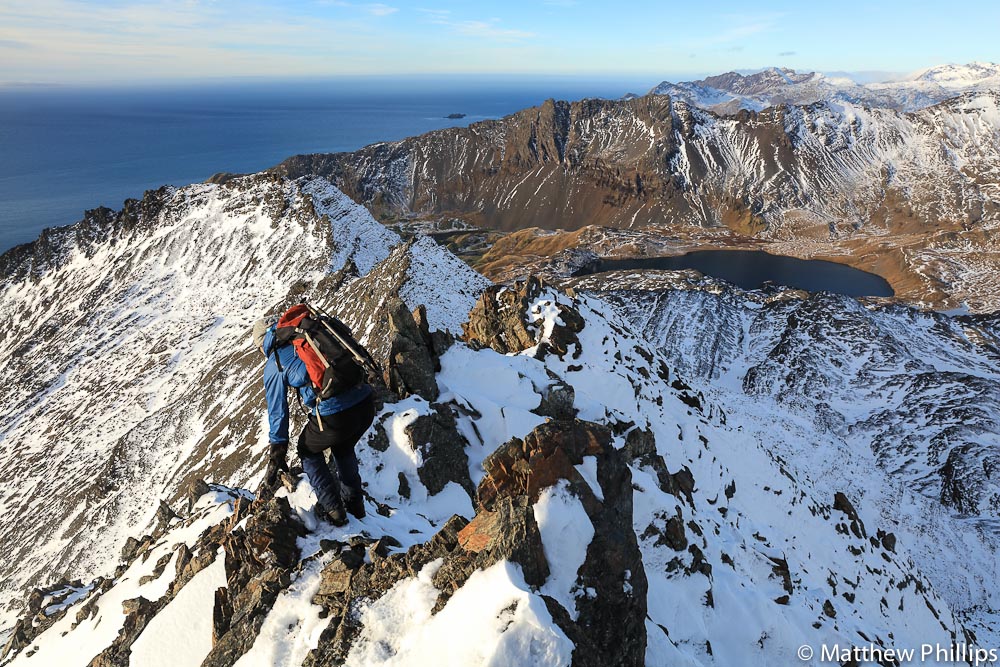 Jerry about to drop into another gully. Maivatan lake in the distance will be frozen over in a month or so. 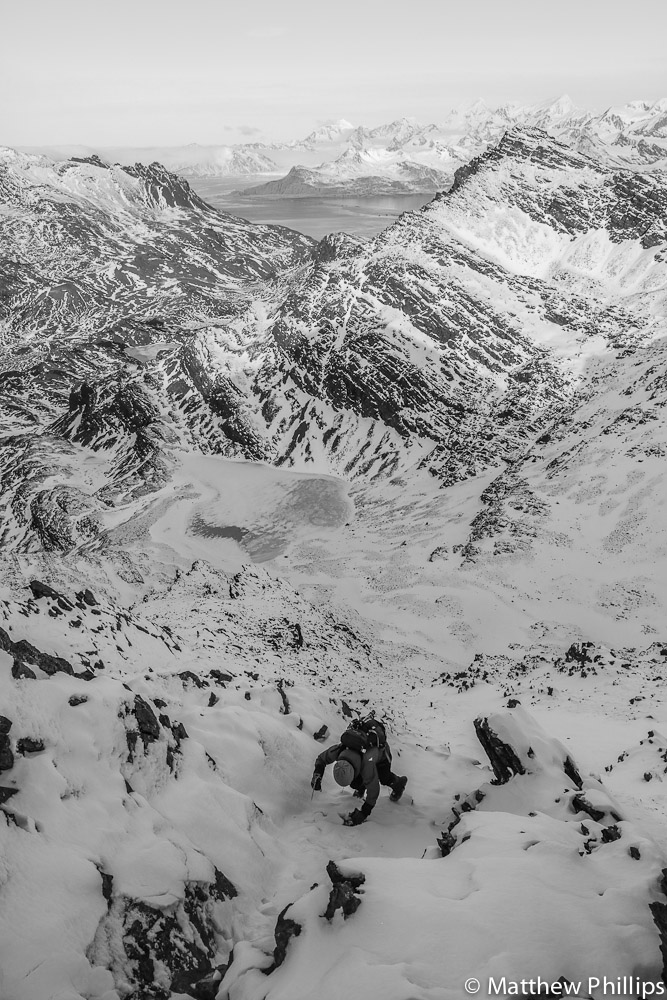 Jerry making his way down the gully from the summit. 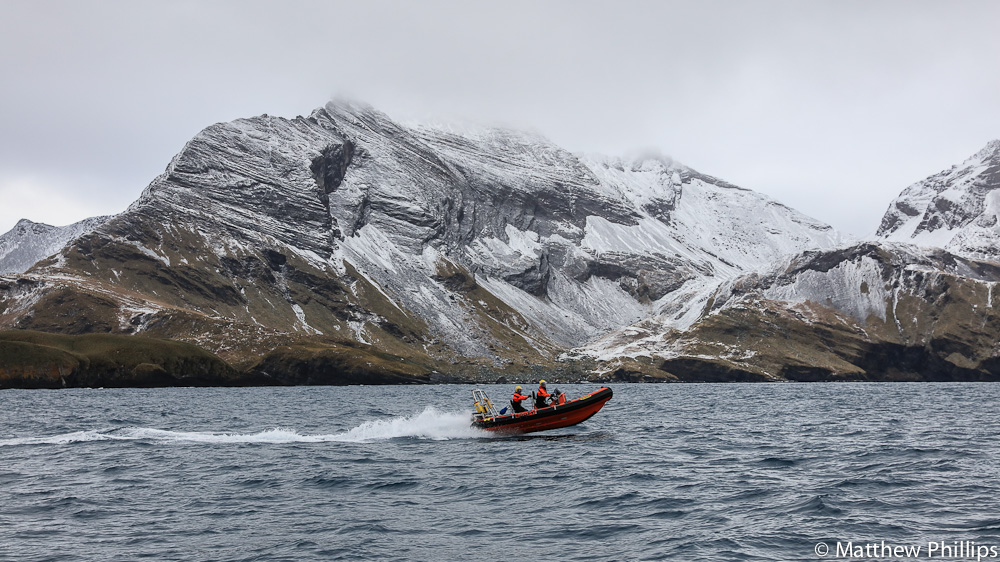 Some extended boating late in the month took us round towards St Andrews. Another opportunity to have a look at O’conner peak from a different angle. I still might have a chance to have another crack at the whip before I go. 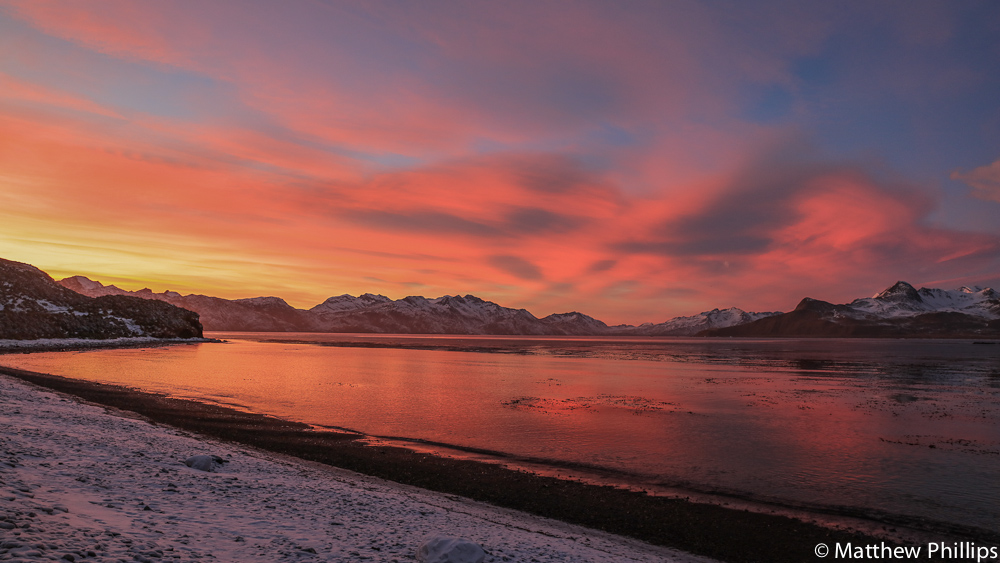 Getting up for earlies is great at the moment, the sunrises occur after 6am, when you get up. In the summer they are about 4am! 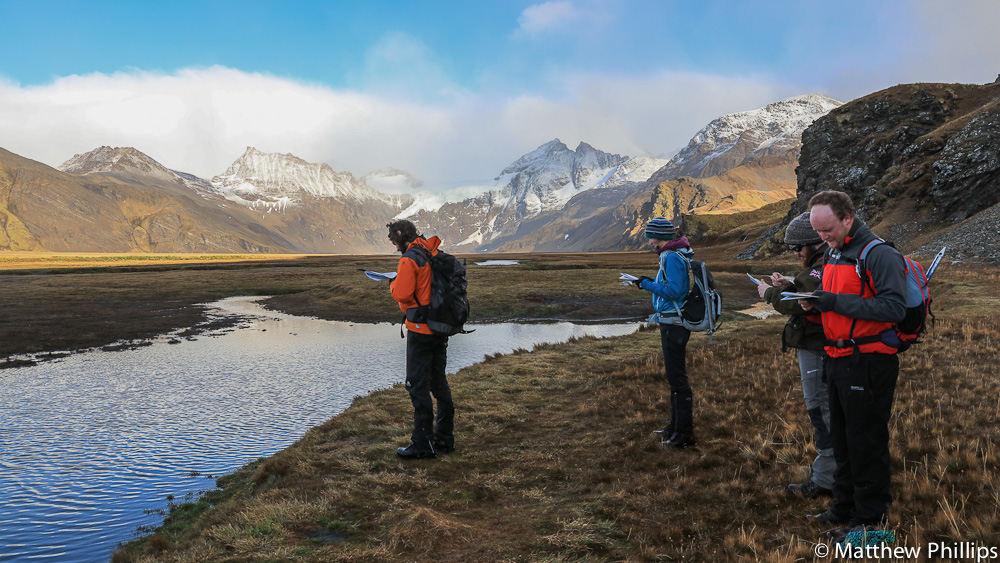 I offered to take anyone out for a day of mountain navigation towards the end of the month, it’s been eight months since this was covered in the Winter Teams Training Week back in the UK. 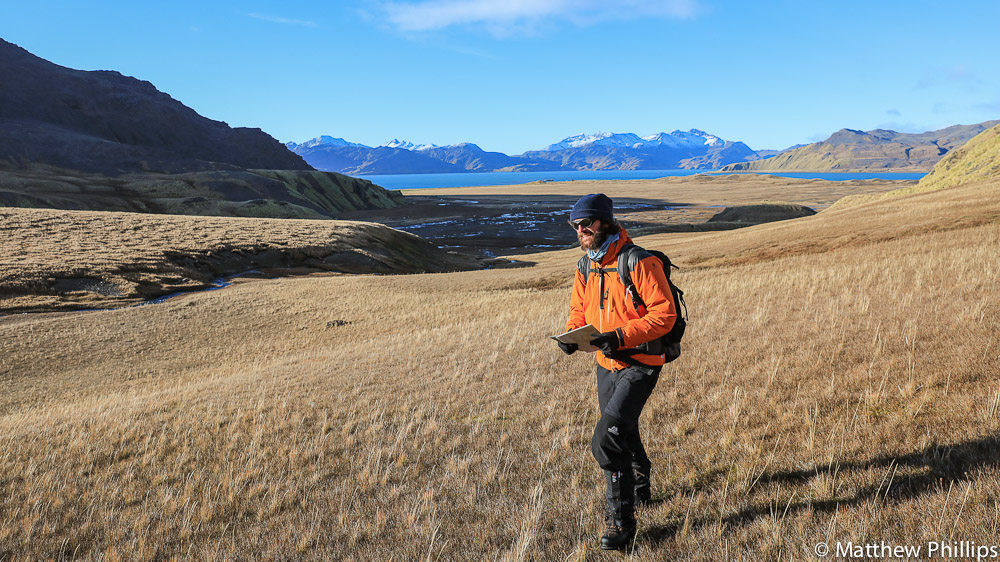 Paddy assessing the terrain. I had great fun doing this! It largely involved me pointing to a oddly shaped contour line and asking one of them to take us there while the others followed blindly and tried to work out where we were. 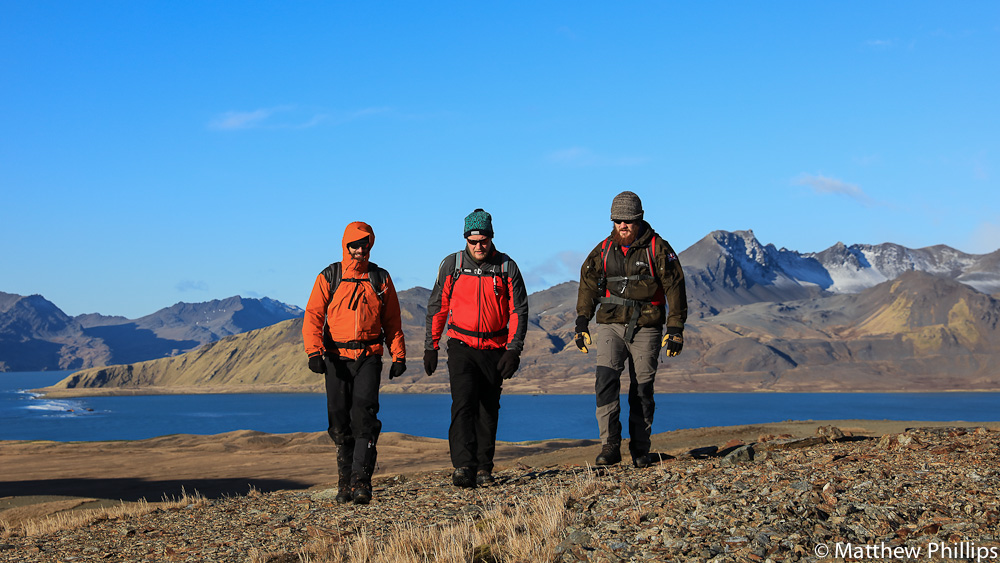 Paddy, Dave and Kieran follow Vicki’s leg leading up Junction Valley. Always good to have a little colour on the hill! 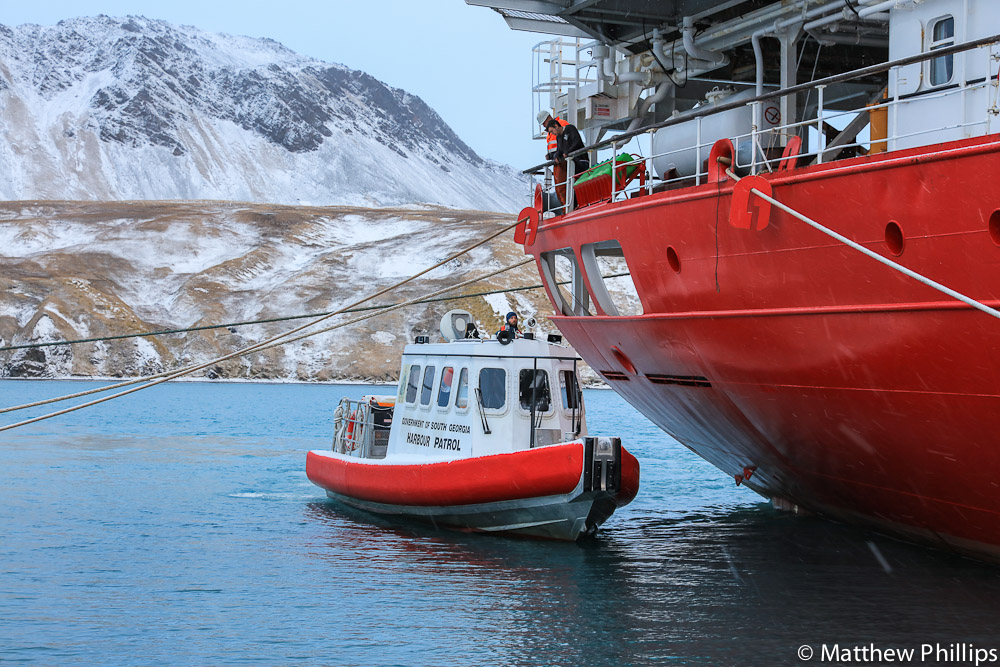 Every three months the jet boats come off the water and into the boatshed for servicing. It clearly says in the handover notes that you can’t launch or recover the jet boat when the Pharos is alongside. I paced it out and thought it could be done so asked the Pharos crew to be on standby to help with lines (if they needed moving) and gave it a go. (Should add it was Paddy who took the photo so technically it’s his photo) 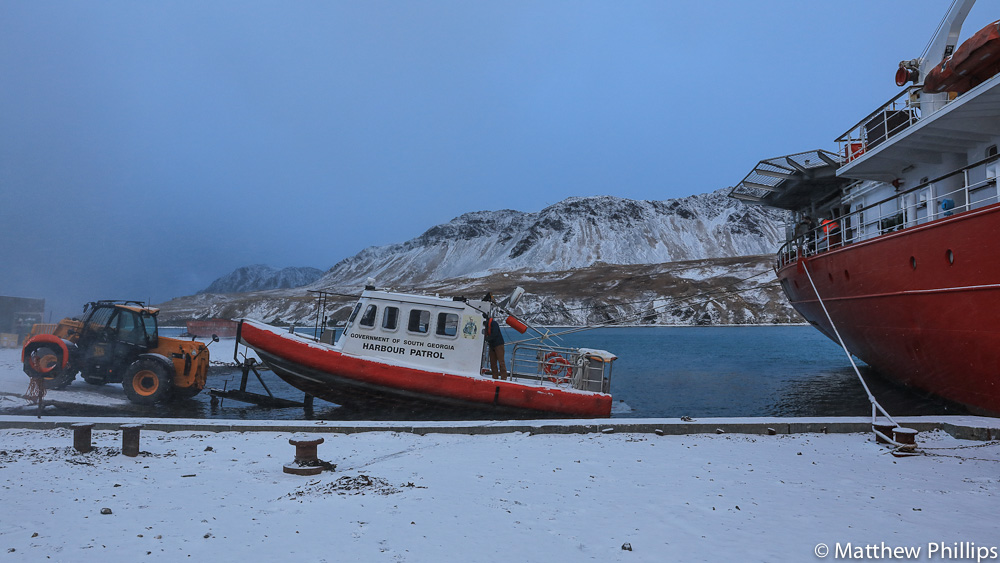 Sure enough it’s tight but perfectly manageable. I’d wanted to prove that one for a while! (Should add it was Paddy who took the photo so technically it’s his photo) 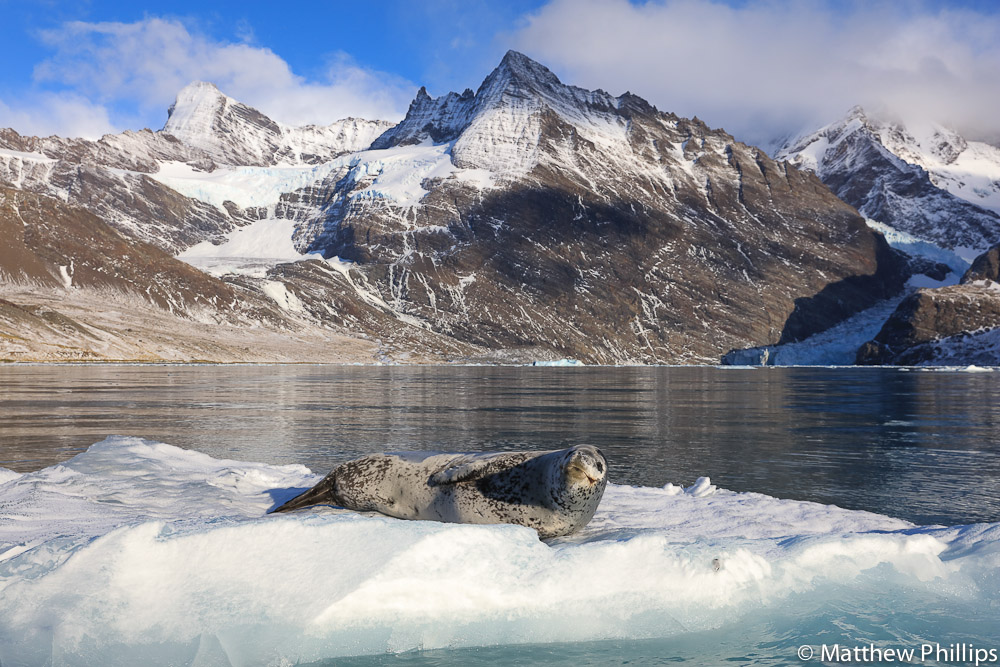 It was my birthday towards the end of the month and selfish people (Dave, Vicki and Kieran) asked me to take them out on the boats, not only was it my birthday but a bank holiday as well! Dave and Vicki were going on holiday to the Barff and Kieran needed to go to the Greene for a Giant Petrel survey. Dropping someone on the Green usually involves going into Moraine Fjord, its one of the better places to see leopard seals. They are my favourite animal down here so it made up for it.