The Pharos has come and taken away the last of the summer staff, in a bit of a 24hr whirlwind stop over. So quick I didn’t manage to get any photos of the occasion. Given the amount of red and white ships that have been in this month it hasn’t really felt like the start of winter to be honest. Only in the last few days has it felt like we are bedding in for winter. I had a couple of great days out on the hill this month for work (well one was work, the other one was close) and remembered how much I enjoy spending time up there. 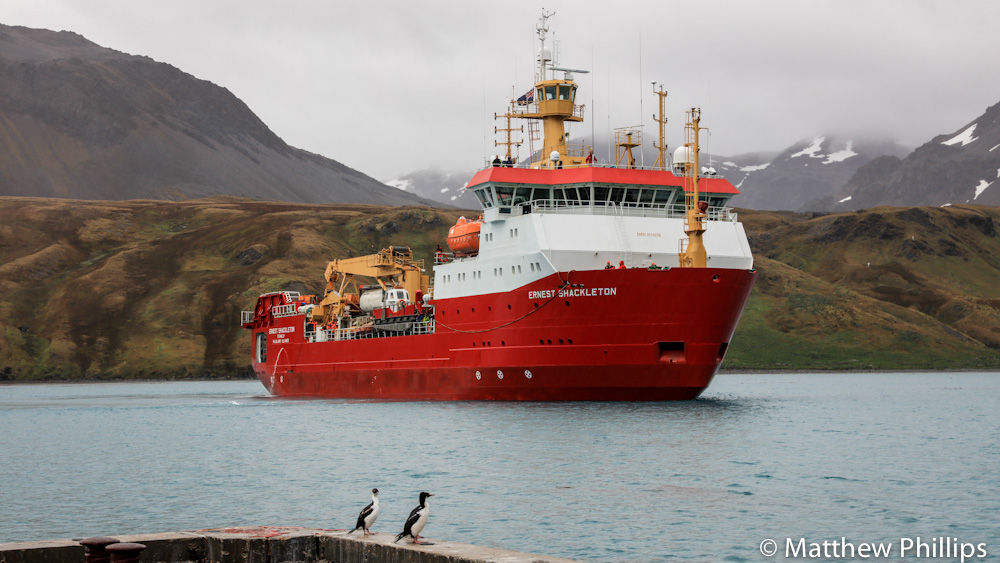 As mentioned in last month’s post the RRS Ernest Shackleton was in for ‘last call’. At the more southerly bases it’s one of the more significant dates as it marks the start of winter. For us ‘banana belters’, who aren’t locked in by the sea ice, it’s not so much of a big deal. However this year the Shack had about 30 summer staff from Rothera and Signy Bases on board, having done their last calls before reaching us. 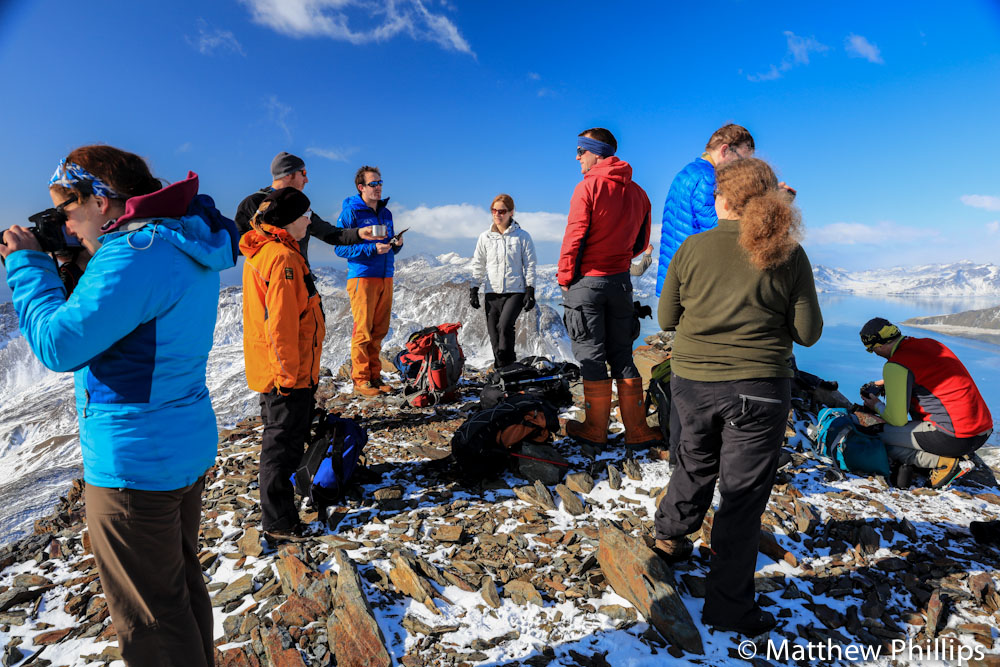 They had a few days alongside so with the cargo business done in one day I decided to go for a day in the hills with the visitors. 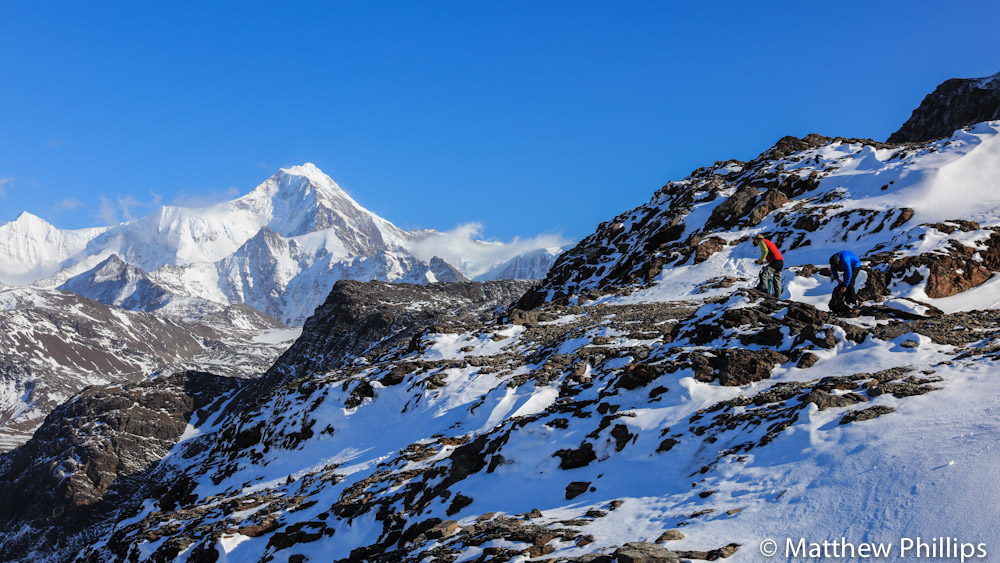 There haven’t been many days like this so far this year. 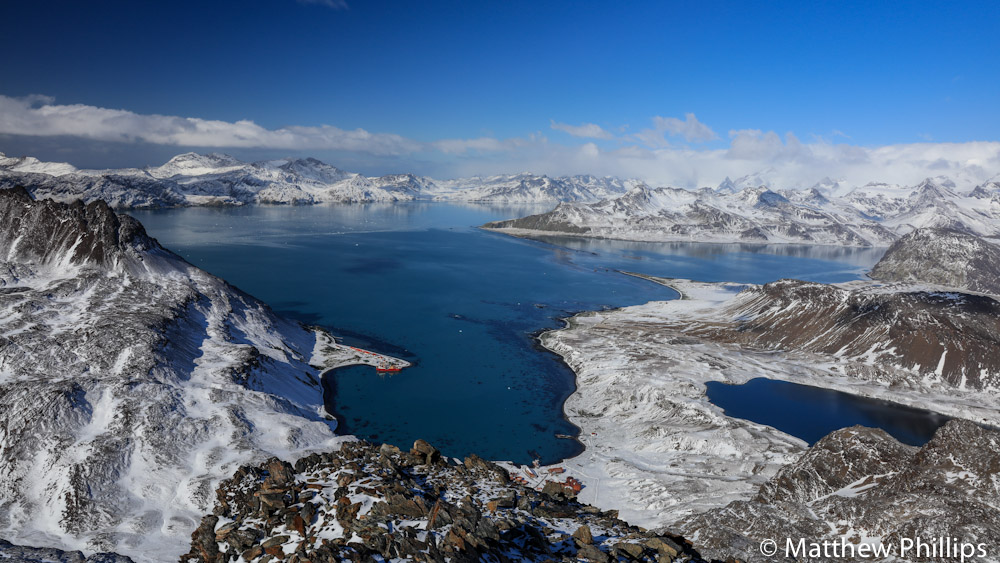 Mt Hodges is the best peak to do from KEP, for reasons that should be obvious. 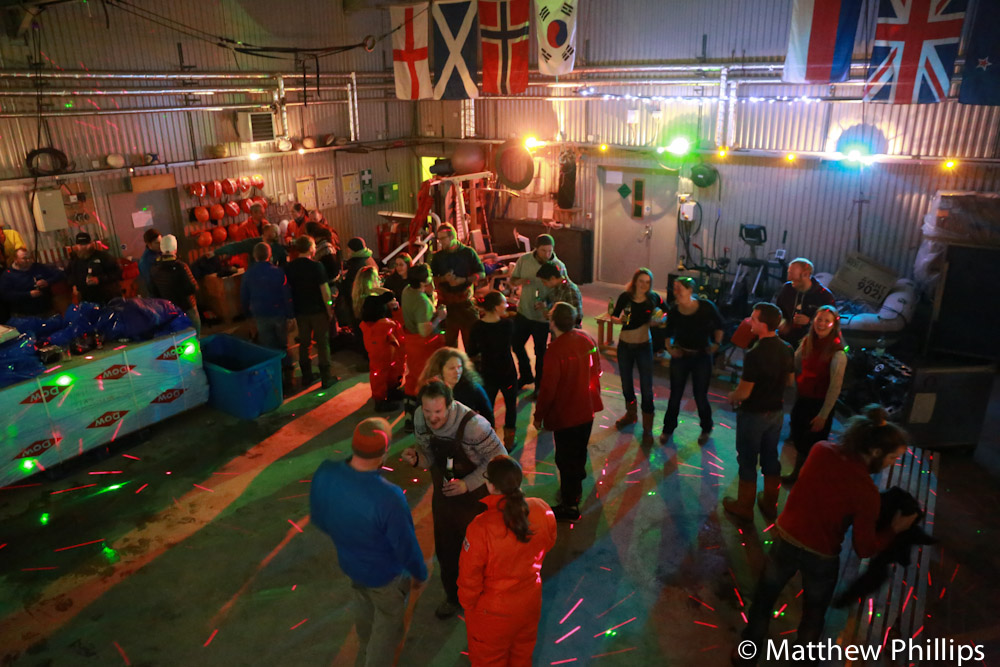 The last night was a BBQ and party in the boatshed. It’s not often we have the numbers to fill the boatshed. Our disco lights are one 20 pound laser light, out of date lifejacket lights and LED lights from the new RIB trailers (we won’t be needing them). The flags are various ones that have appeared on base over the years. I collected them up and hung them from one of the support beams. To the surprise of many on base I even put up the St George cross! 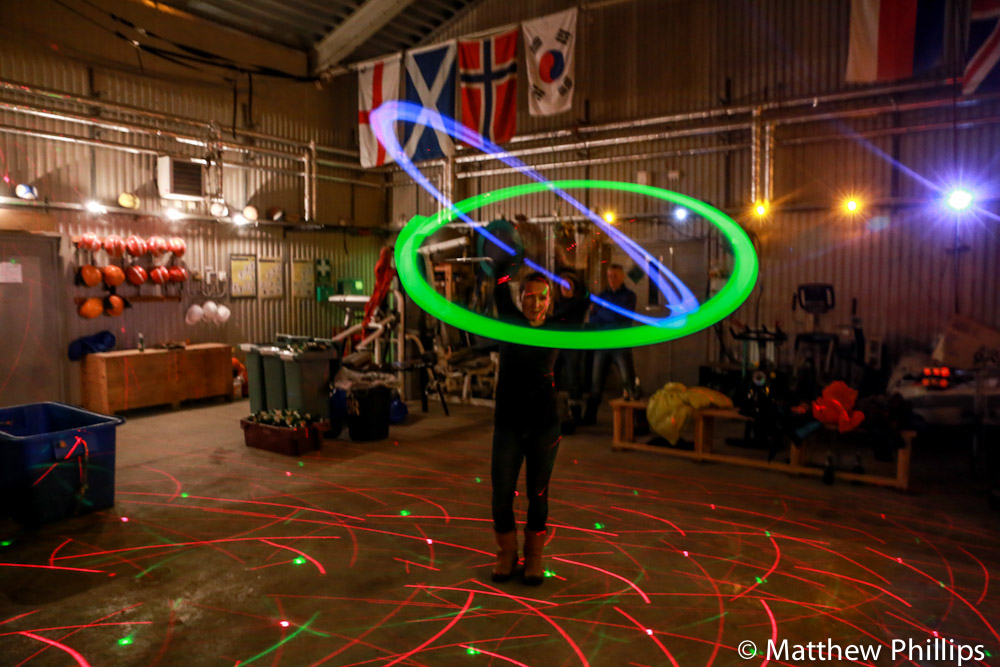 By the end of the night we had glowsticks out and did some hippy poi stuff with them. 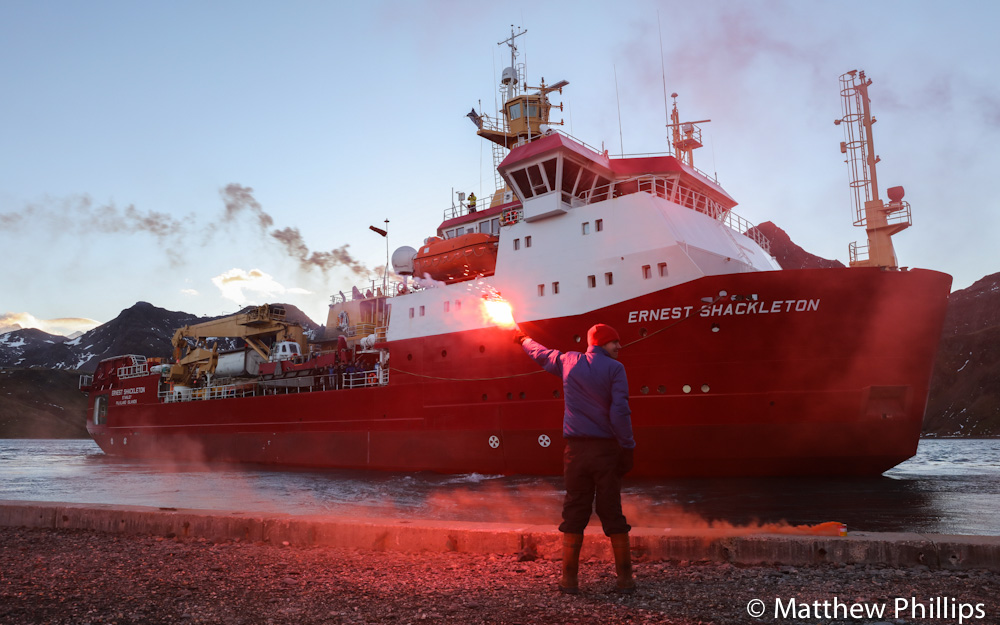 The traditional farewell is also extended to last call. 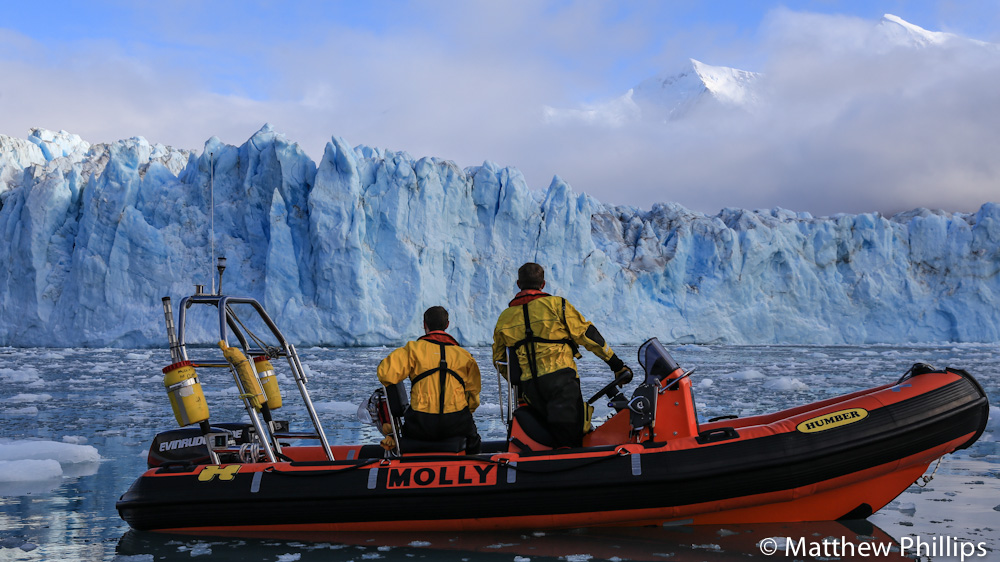 The Nordenskjold Glacier has been active recently, it’s a great place to sit and watch ice calve off. On a calm day it’s great to turn the engines off and listen to the ice as it fizzes away while tiny air pockets are released as it melts.

Siting waiting for people to arrive on the beach we had Jamie back at base update us with the Grand National horse race over the VHF. We’d run a sweep stake and Robbie was the lucky git who cleaned up! Clearly he was very modest about winning when he heard the news. 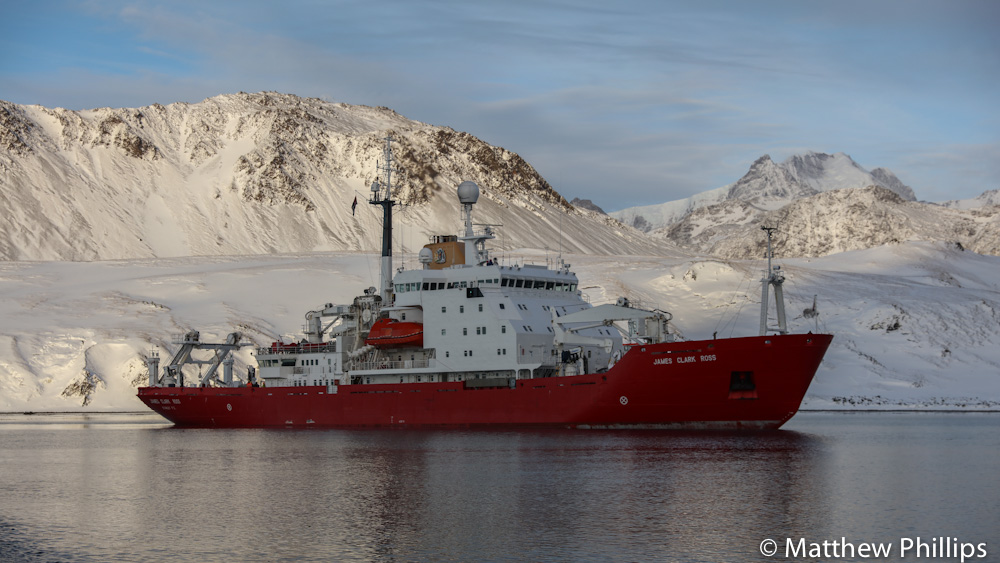 As I was saying, we aren’t locked in by ice and last call doesn’t shut us out for winter. The RRS James Clark Ross (JCR) dropped by for a night and a day so some scientists could collect some ice cores. There is a big (about the size of a house) lump of ice up at Glacier Col, about a 8km hike from base. I was asked if I could go along with them as I knew where it was. It’s fairly well hidden in summer but even harder to find with a blanket of snow around, luckily my mountain navigation hasn’t deserted me. 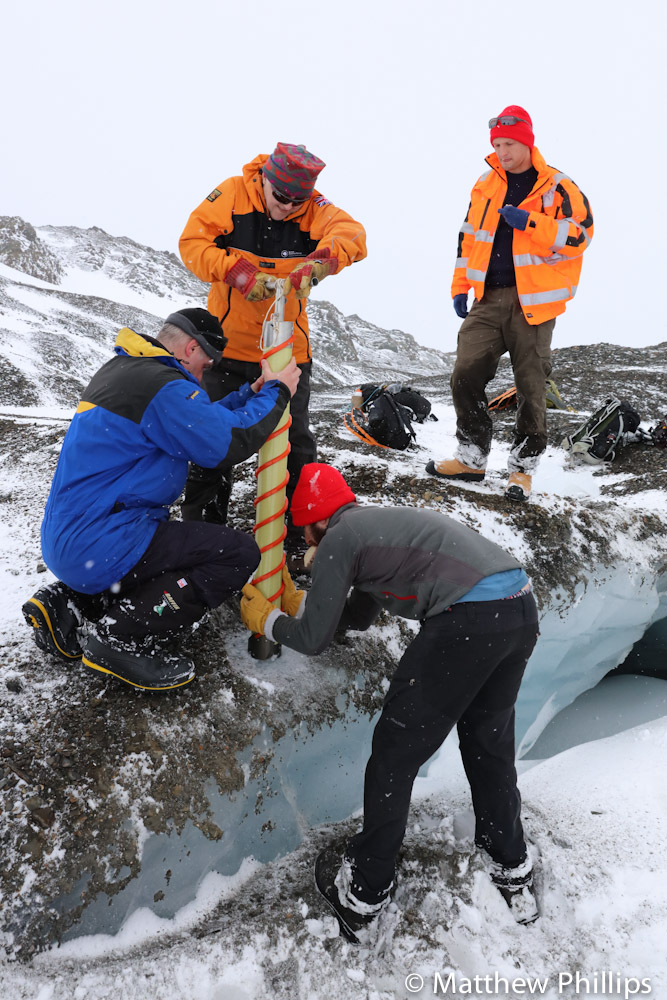 They had been down to the Ross Sea to collect ice cores from the sea ice and some cores from a glacier on Coronation Island, where Signy base is located. The last piece of the jig saw was some from SG. The main housing of the corer is plastic with only a small amount of metal at the bottom that makes up the teeth which helps keep the weight down. 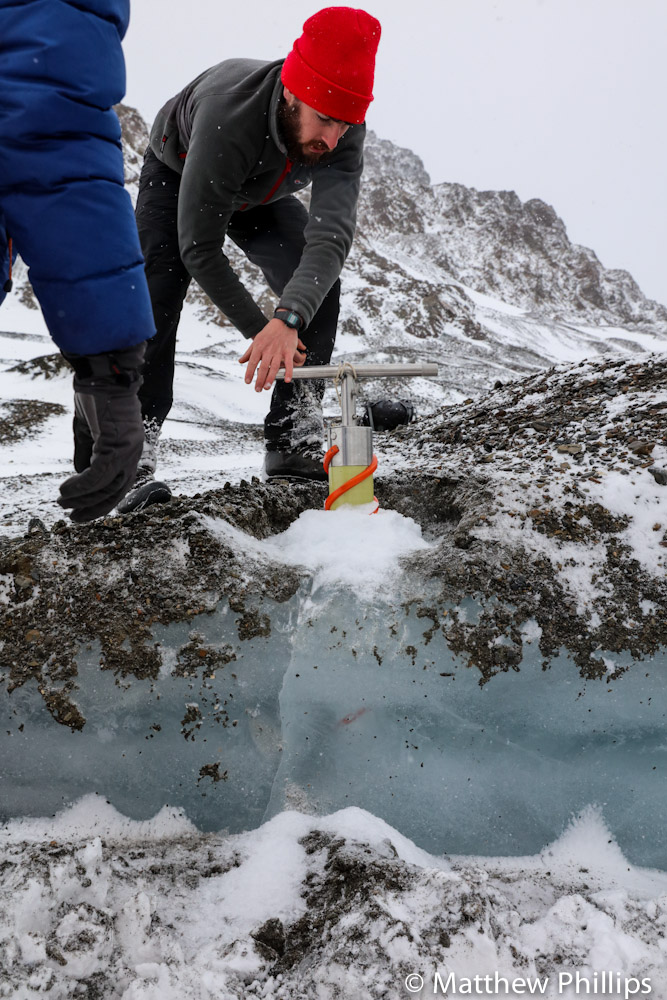 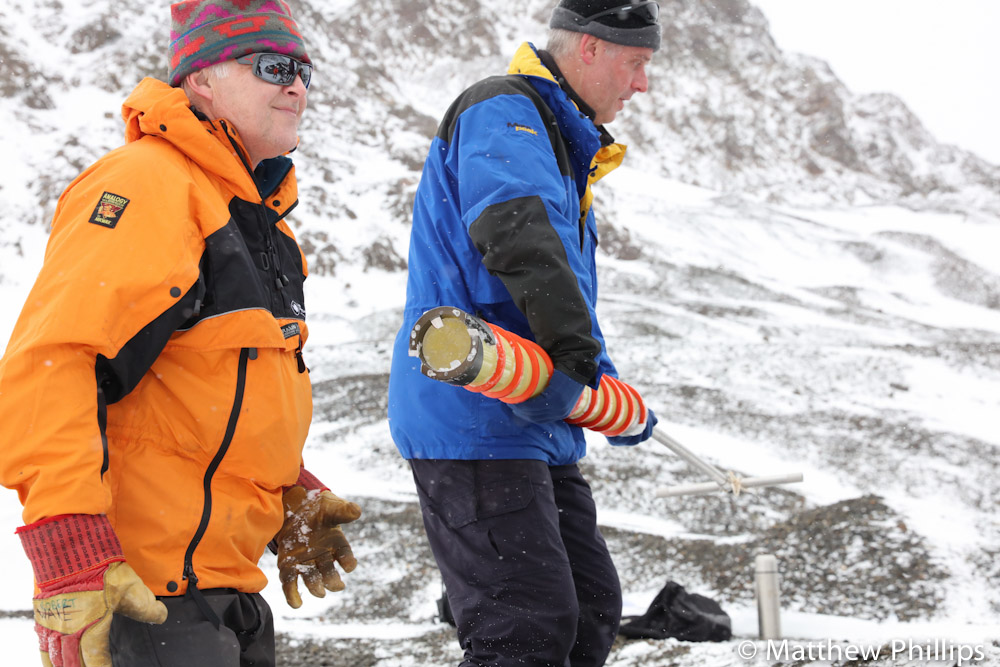 The corer cuts off the core at the base by small blades (just visible) that are forced inwards into the ice as it’s reversed allowing it to be lifted out. I was surprised by how clean a cut the small blades made but Rob (left) explained the ice is layered (think of stacked pancakes) so as long as you are coring directly down you should get a clean cut. 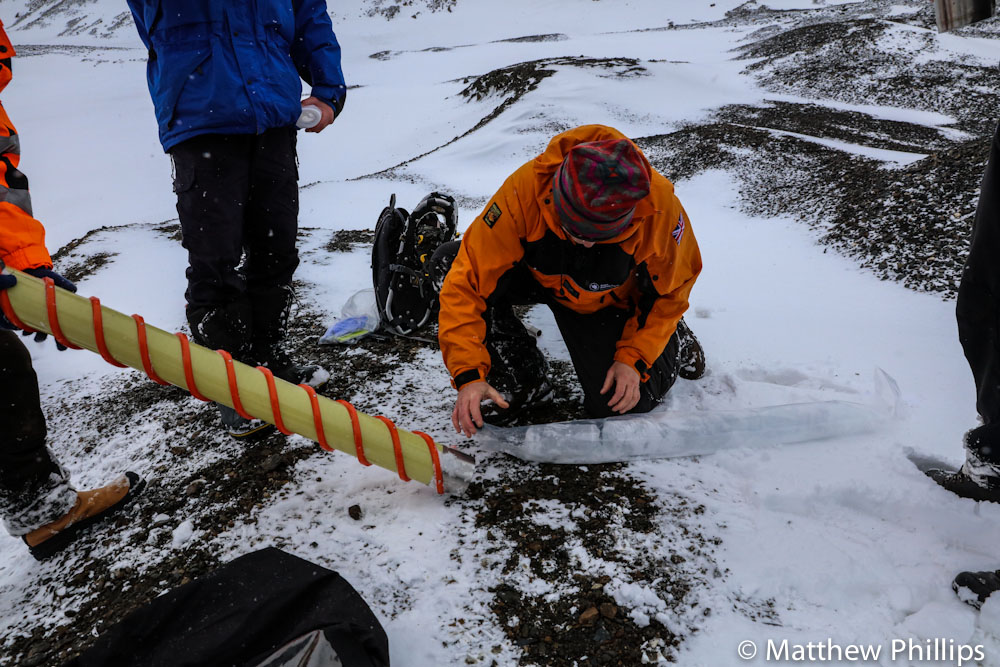 The cores then go into a plastic bag. Rob makes sure the top and bottom are marked, ready to go into the freezer on the ship and ultimately back to BAS Cambridge. 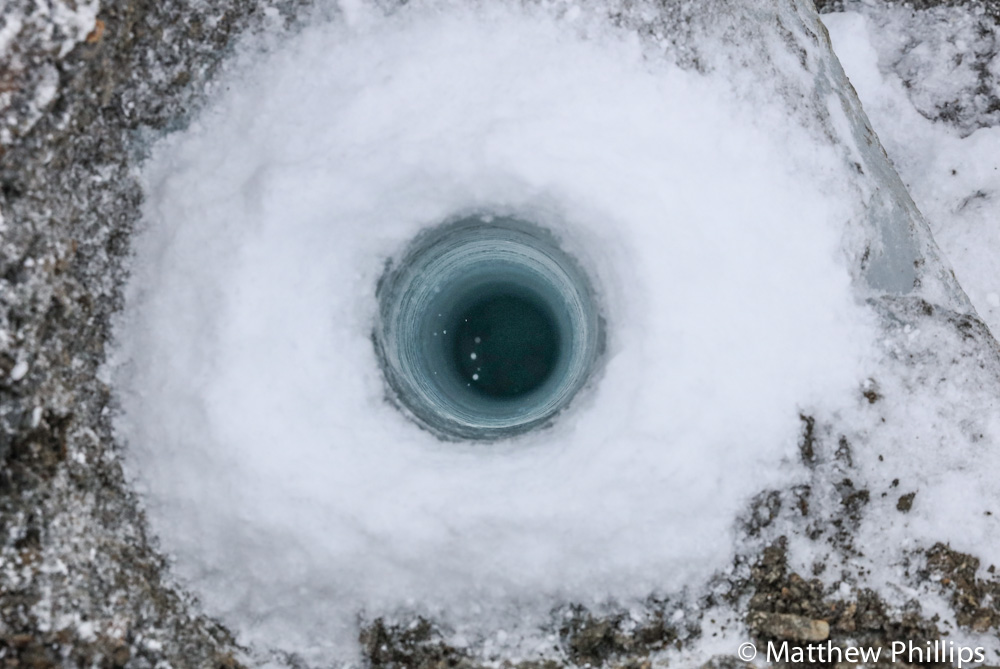 There is now a nice hole in the lump of ice, it should fill in over the winter as the snow falls. I’m tempted to put something in there as a time capsule – any ideas? 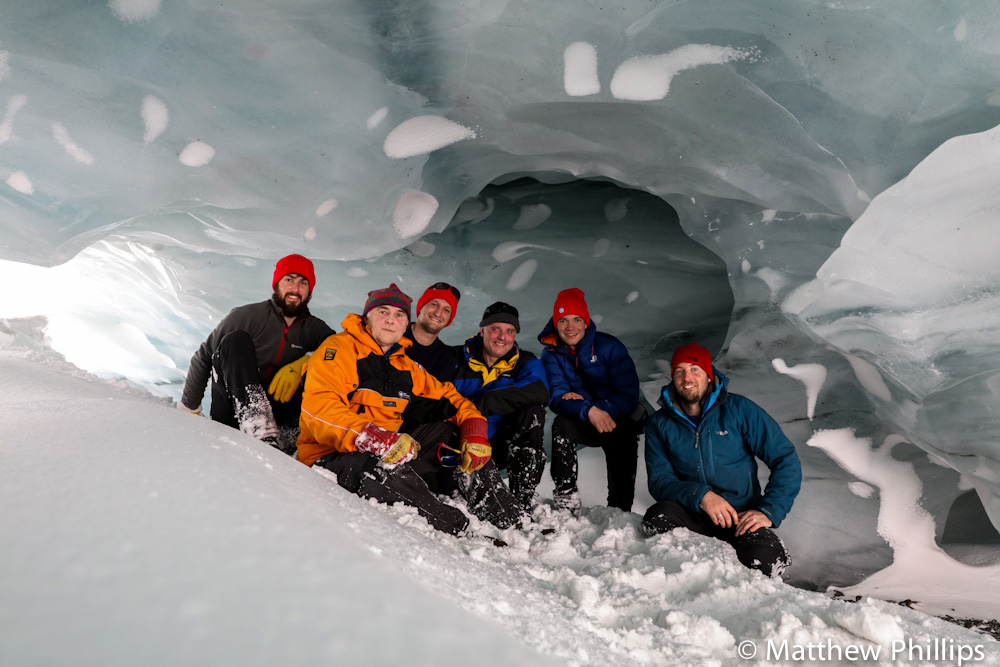 Just before heading back we posed for a team photo in the ice cave. 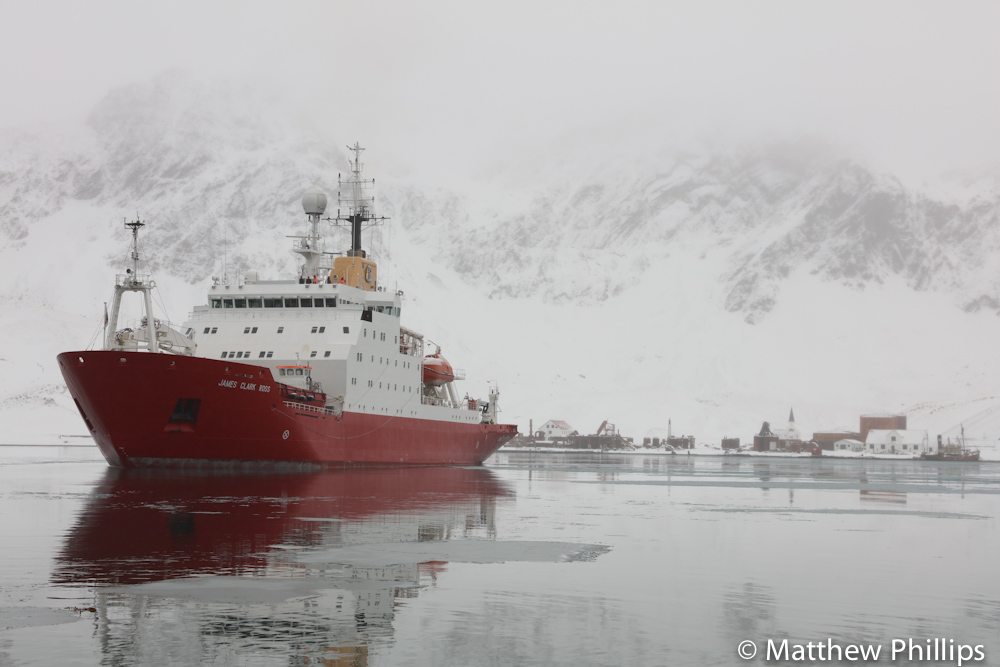 As the JCR pulled away the early winter snows really started… 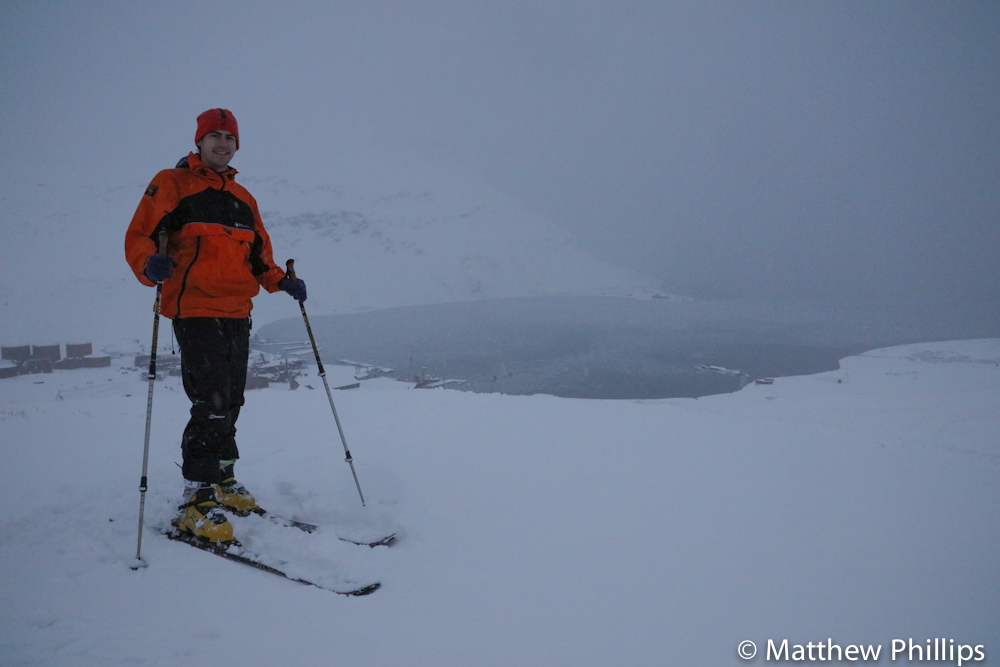 Lewis and I took advantage of the early snow the next day, despite the poor visibility, to have a run down the track that leads up to Gul Lake. 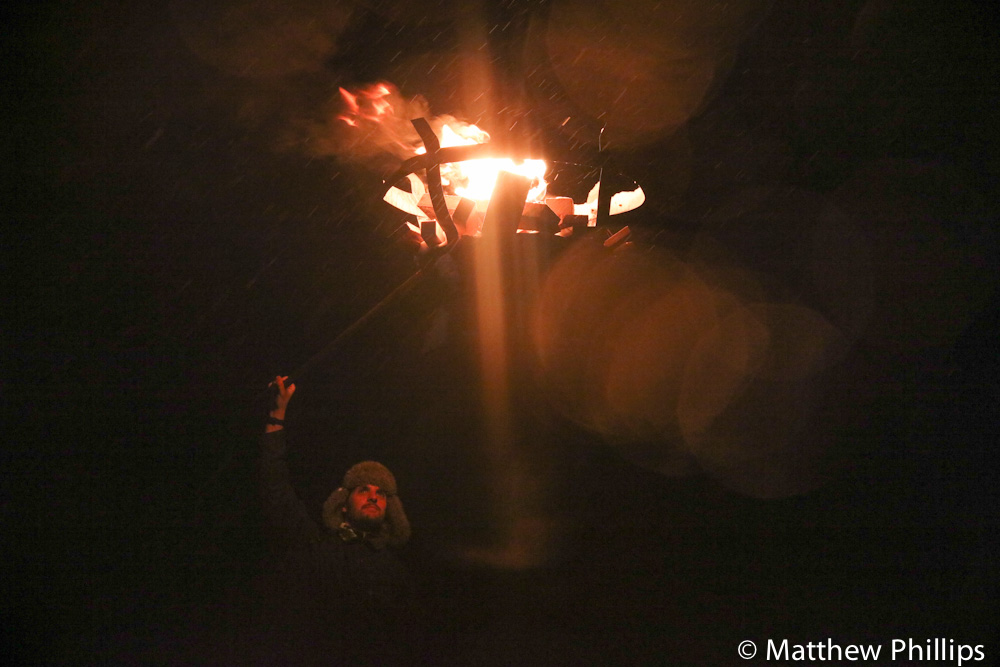 As part of the Queen’s 90th birthday celebrations we lit a beacon on the beach. I believe there were several hundred lit around the world on the day. Robbie, being the youngest on base, was tasked with lighting the beacon. 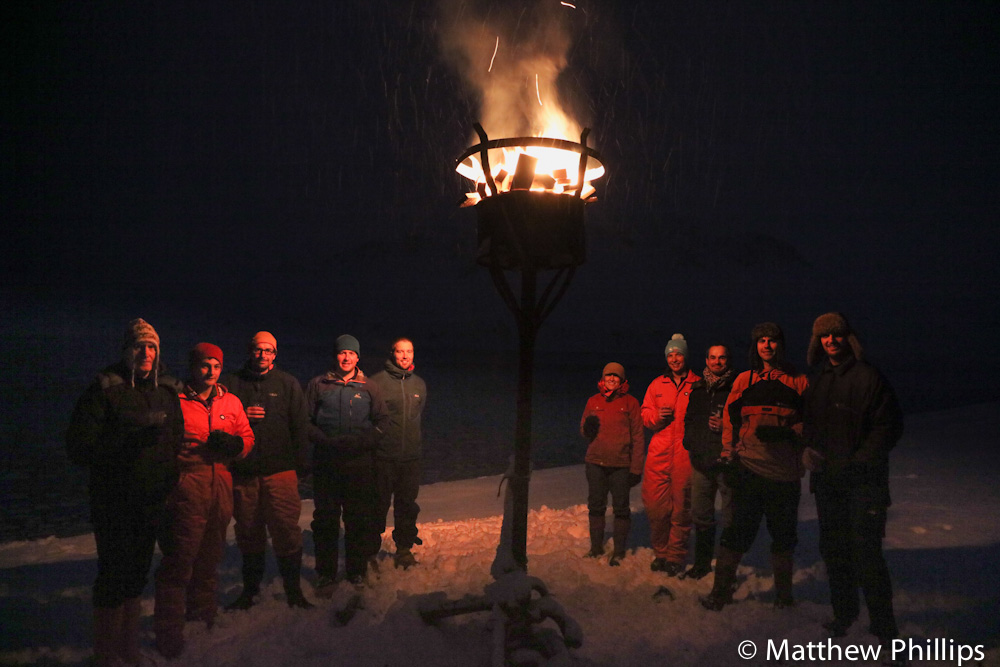 We then posed for a group shot around the beacon. I believe the photo is being presented to the Queen along with various other shots from around the globe. 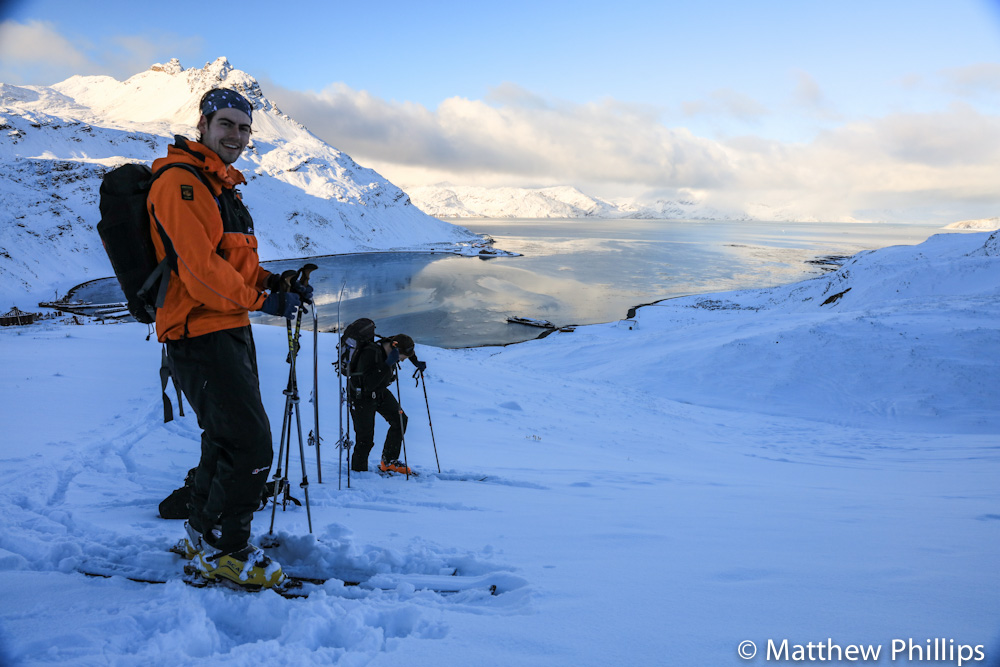 A few days later, when there was enough snow not to scratch the bottom of your skis and the weather was much better, we headed back up to the top of the track for a few more runs. 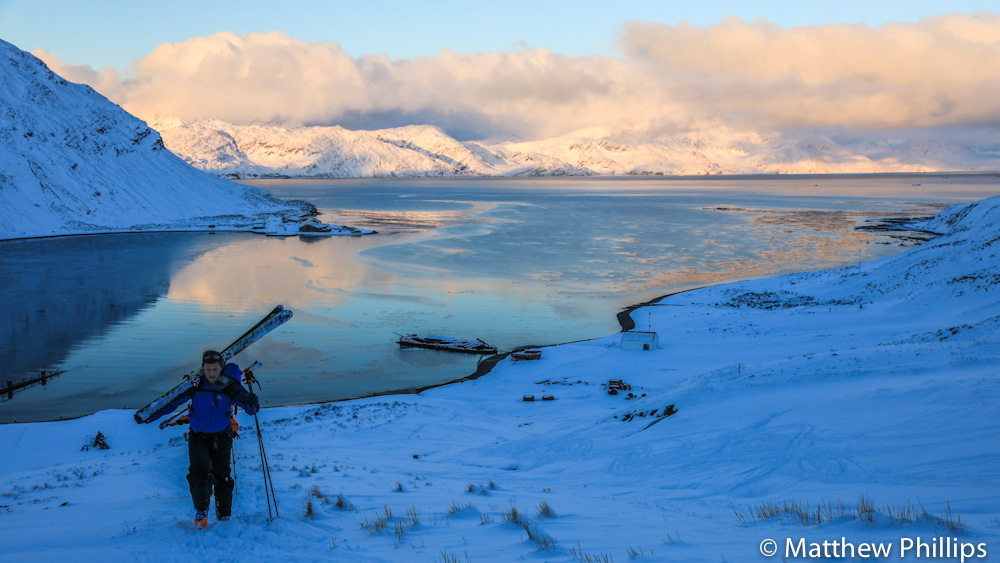 the only problem is there aren’t any tows here, so you either have to put skins on the bottom of the skis (skins let you slide the ski forward but grip if they try to go backwards, allowing you to walk up hill) or take the skis off at the bottom and walk back up the hill. This is called ‘earning your turns’. It’s good for fitness but when you consider it takes about five minutes to walk up and set up the 30-60 second ski down you don’t seem to get much bang for your buck! 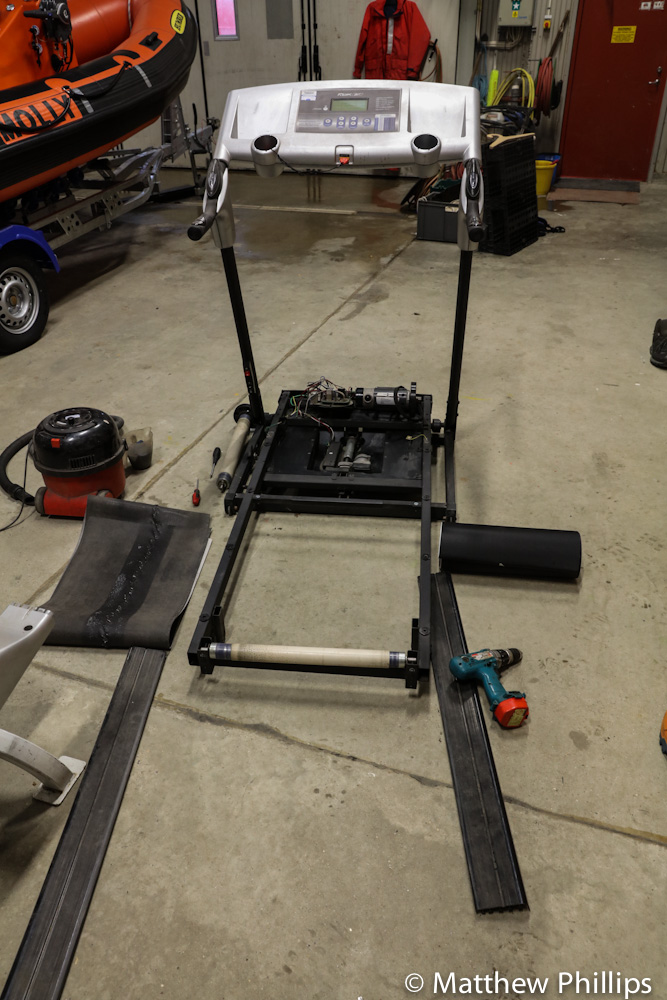 Our treadmill was salvaged from the Shackleton two years ago after Bird Island sent it out. We got it working shortly after. It then broke before being fixed again and again and again. I’ve nicknamed it Lazarus. Earlier in the year the belt started to tear and needed replacing. Sue brought down a new one that I managed to source online. Old and new (rolled up nicely) belts on the left and right of the main unit. 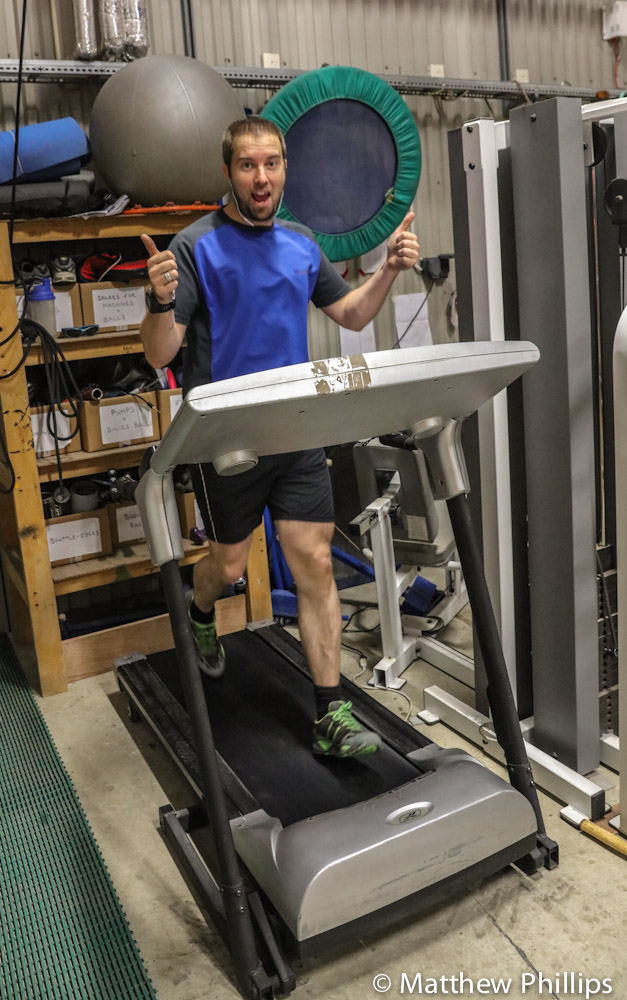 It didn’t take me long to get the new belt on and get Lazarus (and myself) running again. I’m back in full time training for a race in August now… Reports of my retirement have been greatly exaggerated! (Though I did start them). Hopefully I’ll get some sun on those legs before the race.

Remember you can subscribe to the blogs, it’s free! I try to publish a new one every month. You can subscribe by using the ‘contact/subscribe’ tab at the top of the page. If you want to opt-out later you can easily do it on the same page by re-entering your email in the ‘unsubscribe’ box. Please put something in the ‘Location’ or ‘interests’ box as you may look like a spammer if you don’t.