Boating, boating and some more boating

Looking back February was, in some ways, a bitter sweet month. We had some great weather, this year’s team is the most active I’ve known so it’s easy to find people to do a peak with, we had the half marathon and we did the most boating hours, for a month, on record.

There was a risk this year, with this being my fourth season, that the job and life would feel stale. But, with Erny gone and Paddy still away I had the reins of the boating operation to myself, something that is never planned for, given how busy the summers tend to be. As it was, it was a great challenge for me, though by the end of the month I was fairly spent! I didn’t do any training for the half marathon so as much as I enjoy the boating it definitely kept me occupied and what few days I had off were largely spent recovering. 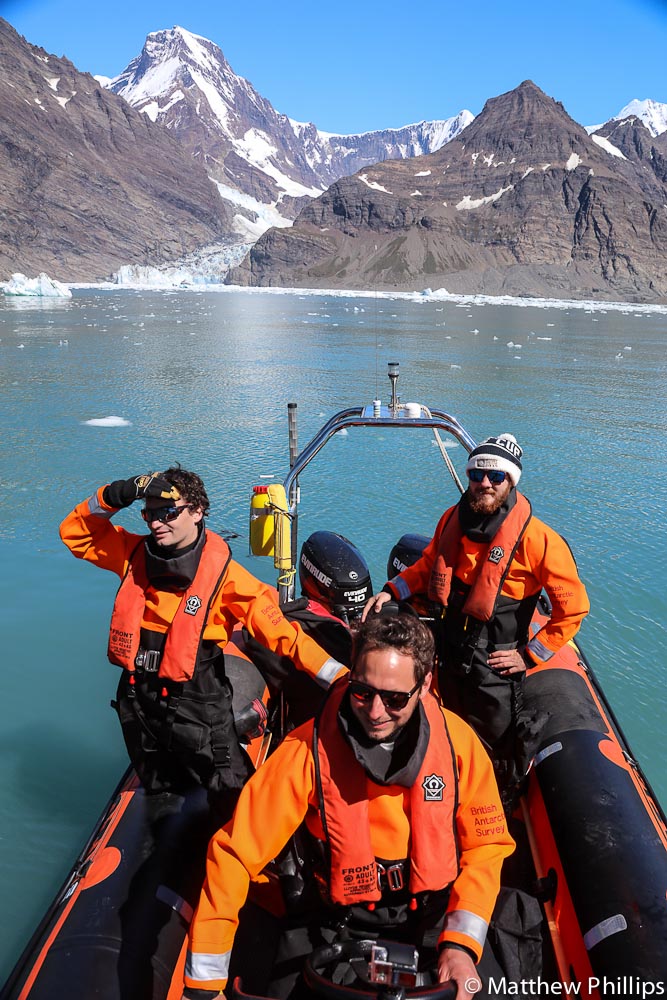 Luckily this year there is rarely a shortage of people willing to help out with the boating. Moraine Fjord is one of the best areas in our boating limits, sure you can see why! The posers in the pic are Fraser (Doc), Jerry (Station Leader) and Kieran (guy who looks at the Fur Seals poo), left to right, respectively. N.B if you know Jerry you might notice the hair cut! 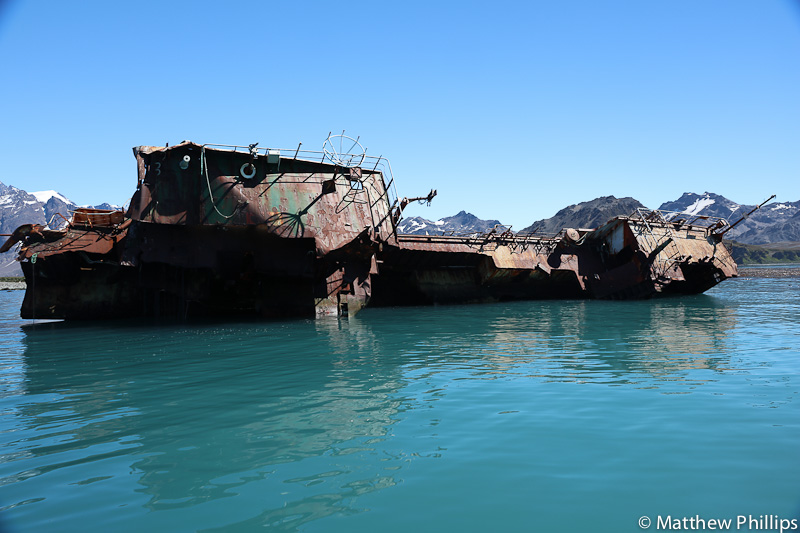 At the northern end of Moraine Fjord is a submerged terminal moraine that causes the ocean floor to rise from 200m deep, on either side, to three or four meters quite sharply. Some parts of the moraine sit above the low water line, exposing rocks. On the other side is a popular anchoring ground for fishing ships. One fishing ship, the Lyn, ran aground on the rocks in 2003 and has been there ever since. 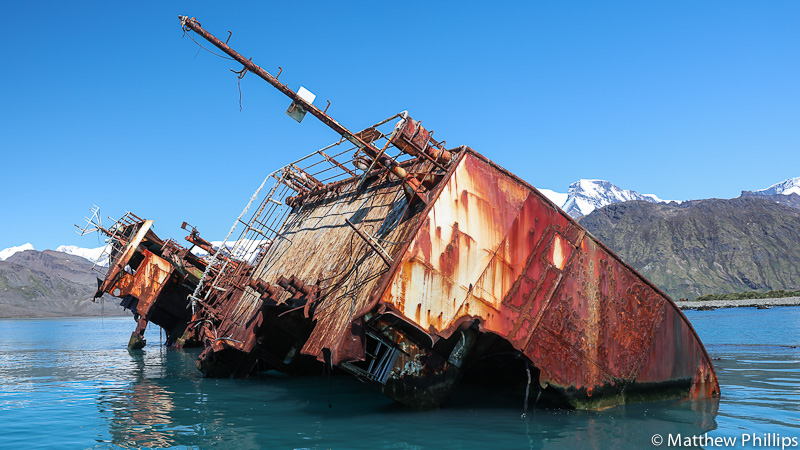 The deck and port side (left in photo and in life!) have been battered by the northerly swells that make it into this part of Cumberland East Bay, and have slowly been eating away at her. No lives were lost when she ran aground and she nearly made it off the rocks at one point. My understanding is the crew were taken off quite calmly a day or so after she first ran aground. 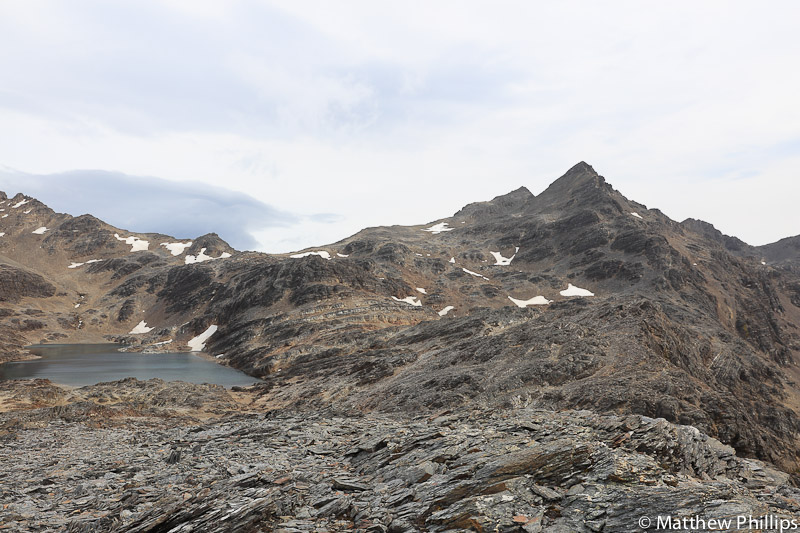 I did manage a couple of days out in the hills this month. I’m not a box ticker when it comes to hills, however, Anderson Peak is one of the peaks I hadn’t done previously so the temptation was to much to resist. 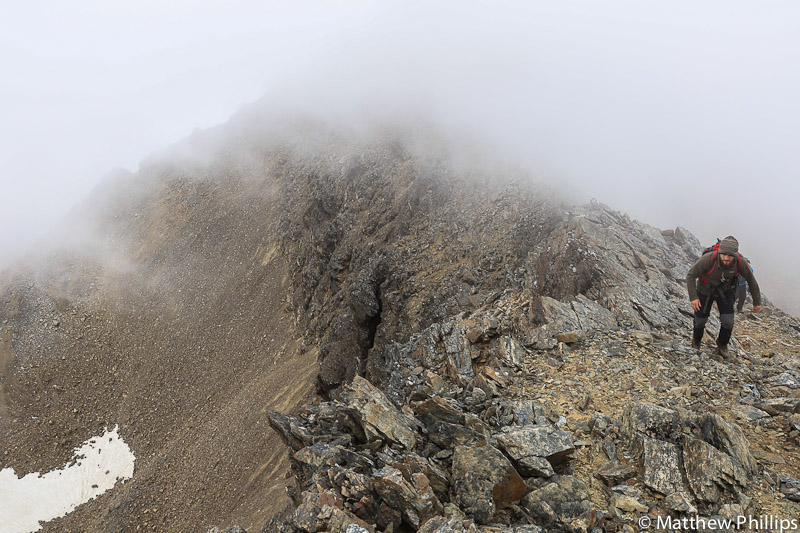 It wasn’t the clearest of days, but the cloud adds to the atmosphere. Kieran makes his way up the ridge as the cloud threatens to close in. 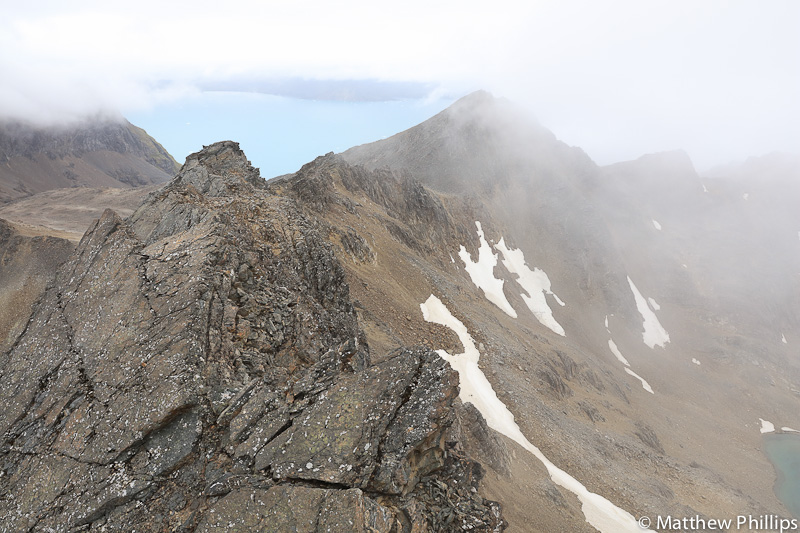 Behind Anderson is a great looking ridge scramble, one for another day! 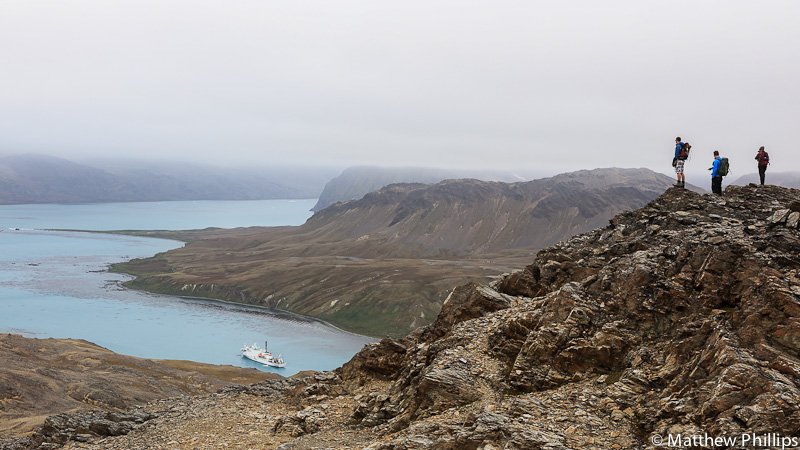 Jerry, Dave (electrician) and Kieran (L-R) looking down into King Edward Cove with the Akademik Ioffe in. You can just see the Lyn off the thin point of land on the far left of the photo, Moraine Fjord on the far side. 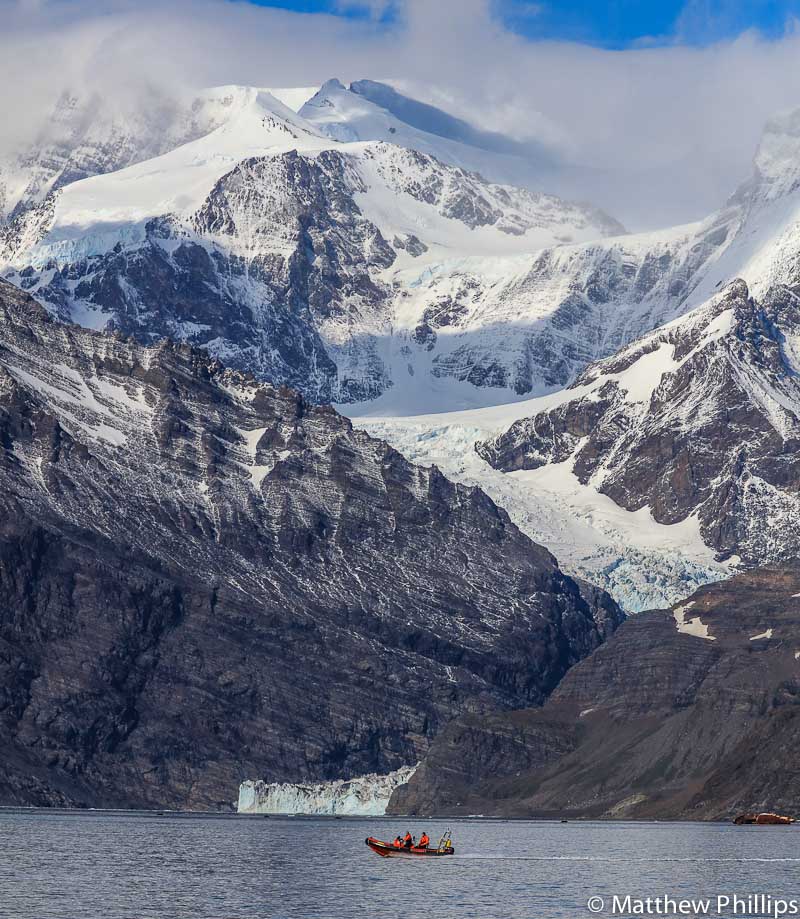 The RIBs did a lot of work this month. Luckily, the weather was generally good, which is a good thing as you are exposed to the elements in the RIBs. You can just see the wreck of the Maresco on the left of the picture, that’s at the head of Moraine Fjord as well. It ran aground the same night as Lyn! She came in after Lyn, saw the navigation lights of Lyn and thought ‘Oh, I guess you can anchor there’ …bang! 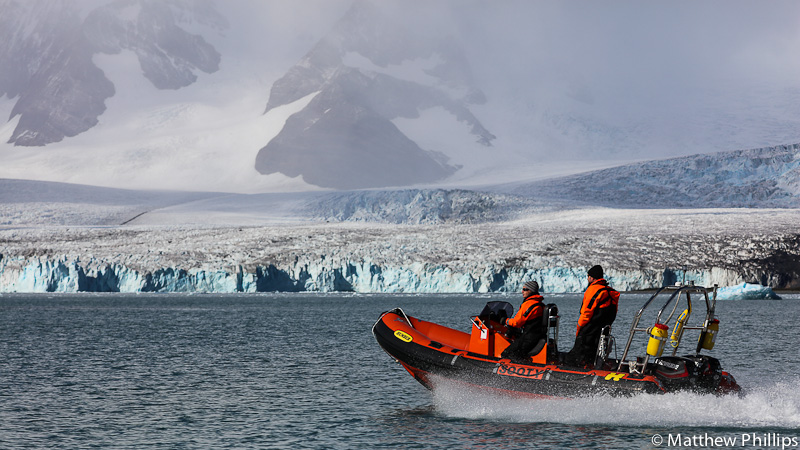 Picking people up usually involves going somewhere close to a glacier, something thats always worth taking advantage of. 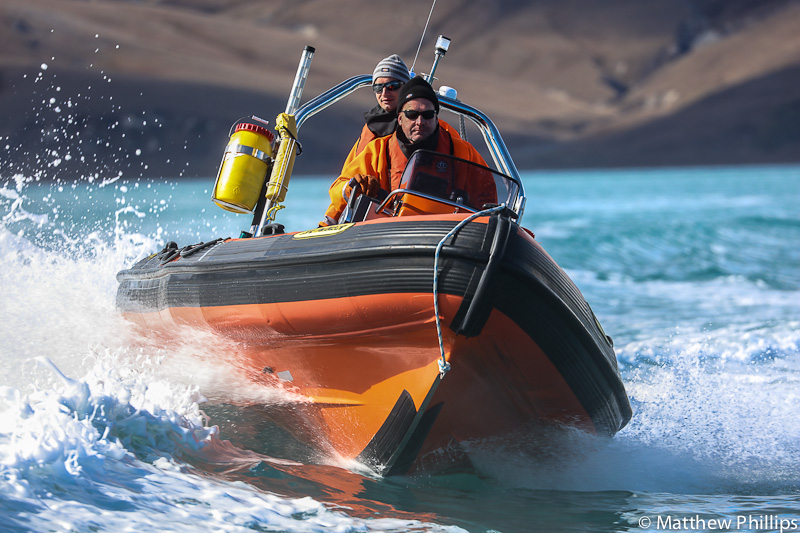 Bob (mechanic) had a bit of fun playing in the jet boat’s wake on the way back from a pick up. He looks a bit Terminator-ish in this photo I think. 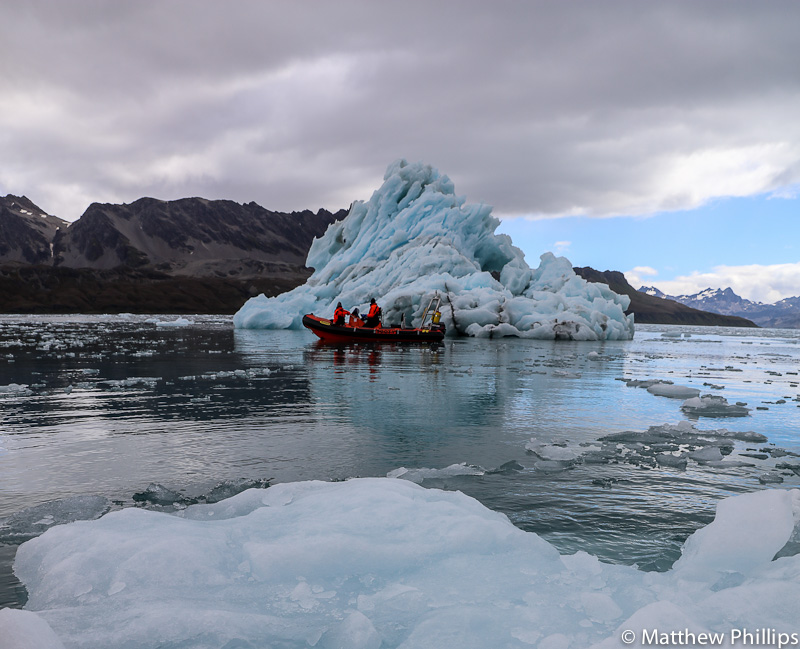 I think all but one glacier, in our travel area, have retreated in my time here. This big lump came of the Nordenskjold Glacier, having a boat in front always helps with perspective. I’ll see if I can get some comparison shots of the glacier I think has advanced and put them in a future blog. 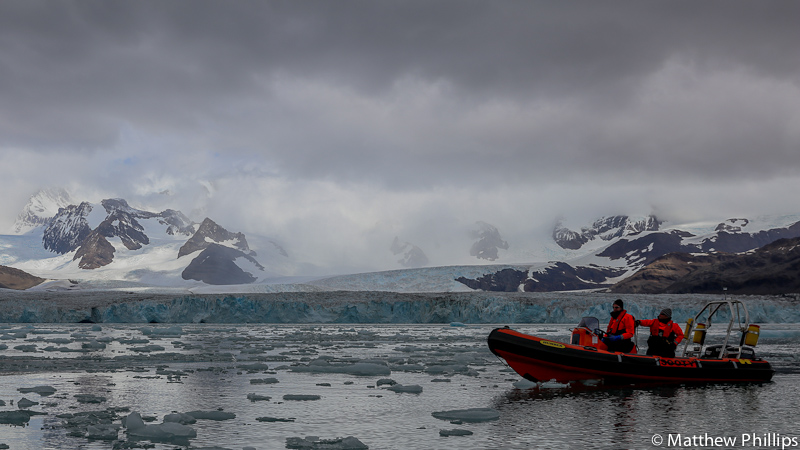 If you are waiting for people to arrive at a landing site it’s often good to shut the engines down and listen to the ice. On a calm day you can hear it pop as the ice melts and the tiny pockets of air escape. It sounds a little like the snap, crackle and pop cereal. 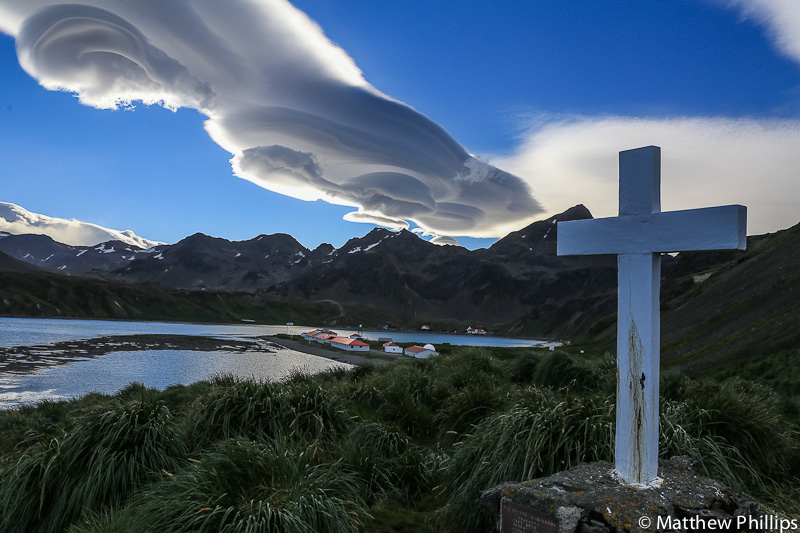 South Georgia is one of the best places in the world to see lenticular clouds, this was part of a time lapse I took. I believe the bird poo has been cleaned off Shack’s cross now. 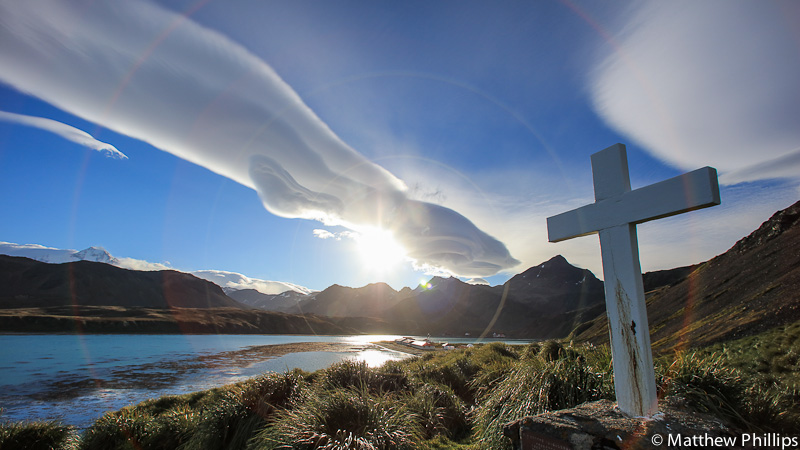 The sun dropped behind the cloud and caused a circular lens flare I’d not seen before. Very cool. 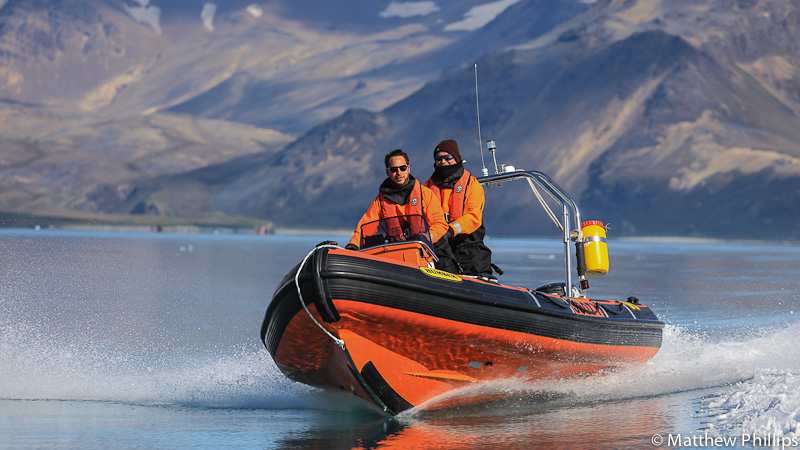 Jerry’s turn to look all James Bond in the RIB. 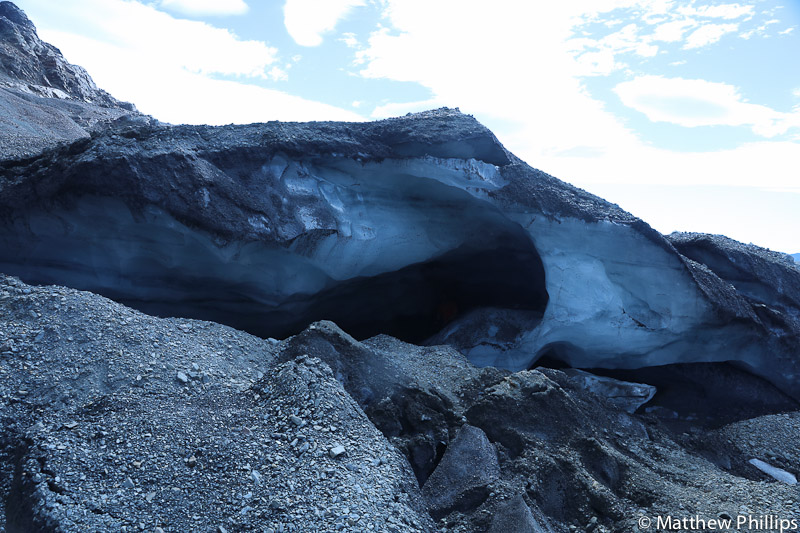 regular readers might remember me helping out some scientists last year and taking them up to Glacier Col to get an ice core. This is the same piece of ice, it’s collapsed significantly and apparently more has come of since I took this picture. 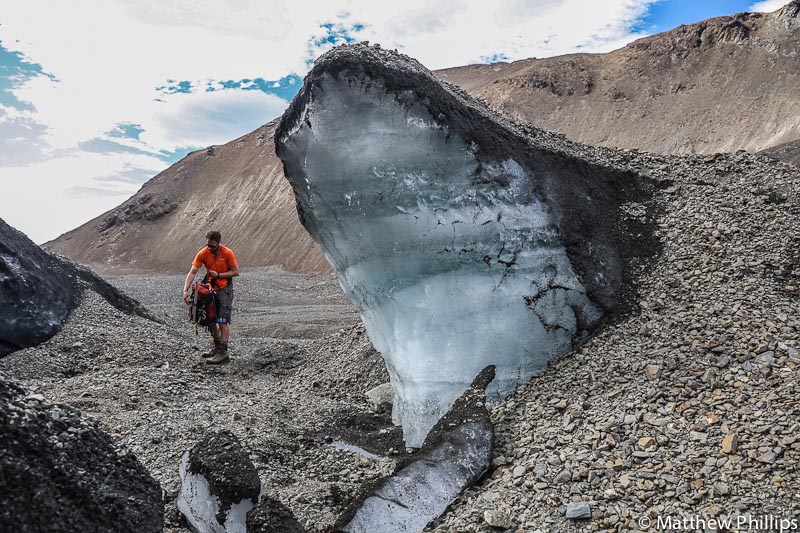 Here’s Jerry standing where a section of the ice cave used to be. 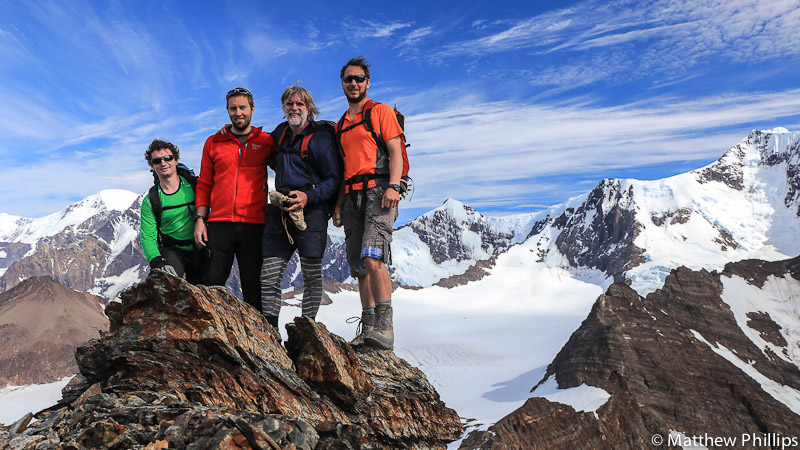 Fraser, Me, Thies and Jerry (L-R) went up Minden Peak, during what must have been the warmest day of the year. Even at 1,000m the rock was warm to the touch – a rare thing at sea level in South Georgia. Thies was here replacing the windows in the church, he sailed down here years ago with his wife Kicki. They left the Falkland Islands in a 40ft yacht with no electronic navigation. Nowadays most people can’t drive on roads to get to their relatives without sat nav! 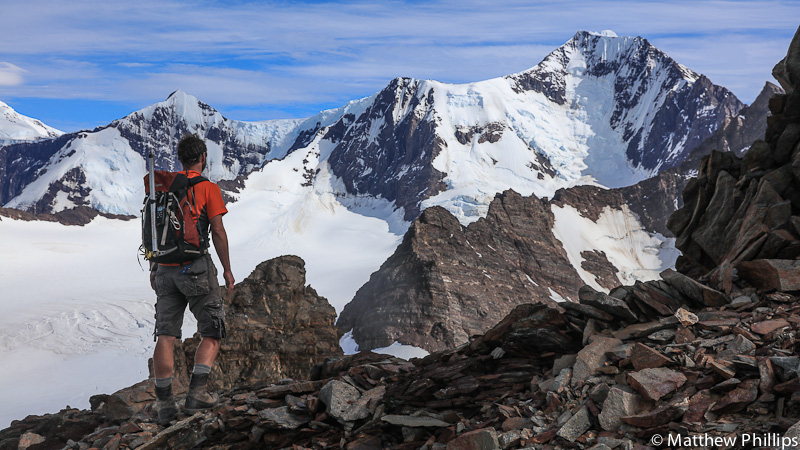 Jerry admiring the view to Mt Sugartop, only a few kilometres from where we were but another 1,300m above us. Still, tantalisingly close. 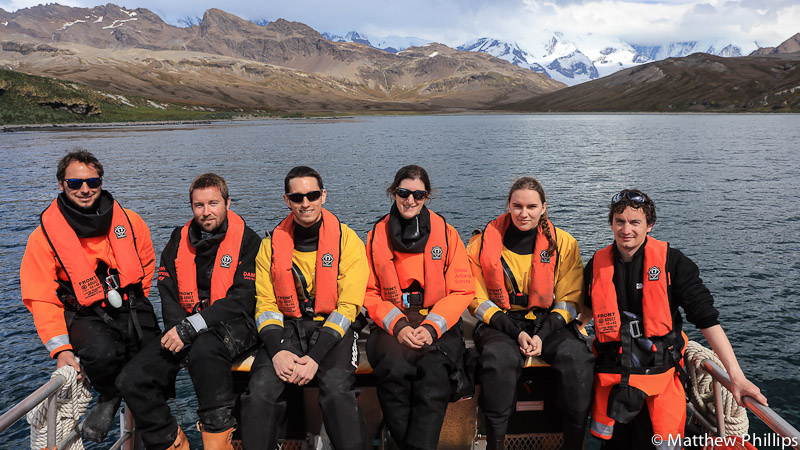 One of the bigger boat trips of the month was to drop Richard and Camille (yellow boat-suits) at Hound Bay. Hound Bay is just before St Andrews Bay which means leaving the relative safety of Cumberland Bay and heading down the north coast of the island. It’s a trip I’m always cautious of making. If things go wrong it’s a long way home and there is no rescue service around here. So we only do it if the weather looks good in the days leading up to it and if the forecast is accurate the day you want to go. I remember this day well as it’s the day the internet came back!

We figured out some time before the internet came back that it would be useless for a while as it had weeks of scientific data to send out, emails to come in etc. It was about two weeks before it was usable to be honest, but by then we were quite used to being without it and another two weeks was easy enough. 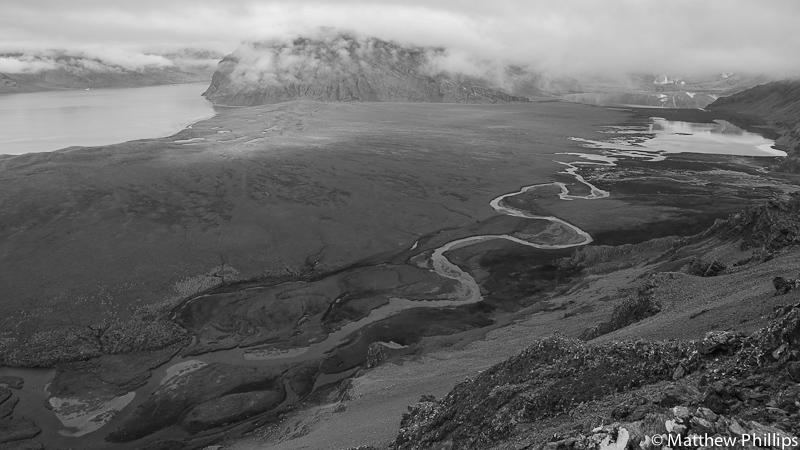 I took this while I was on Brown Mountain waiting for the Half Marathon runners to catch up. Below is Penguin River, it flows down from Hamberg Lakes. The large flat area between the river and Moraine Fjord (top left) is Hestesletten. Once there would have been a glacier flowing down from above the lakes, over Hestesletten and spilling out into Cumberland Bay. The sheer weight of the ice would have depressed the ground several meters below sea level. After the ice retreated the ground rebounded up. That process is called isostatic rebound or post-glacial rebound. Apparently when the military were here (1982-2000) they toyed with the idea of putting a runway in here – I’m glad they didn’t! 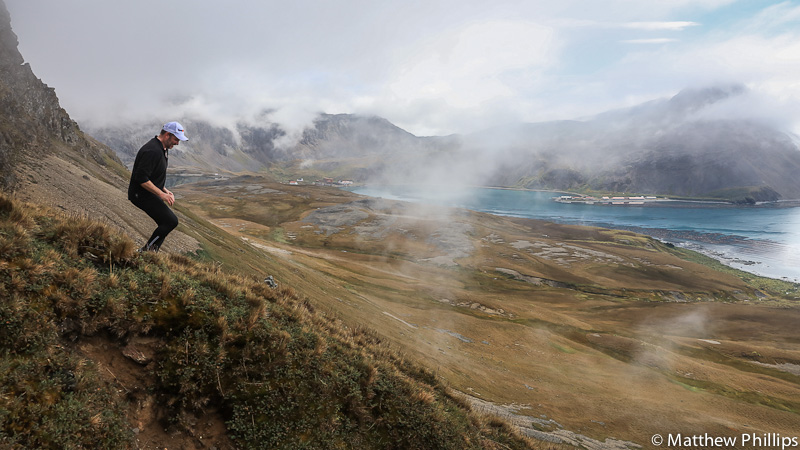 As mentioned, the South Georgia Half Marathon was held towards the end of the month. I didn’t run as my training had come to a halt due to having more on my plate than a spinster at a wedding! I still managed to get out and cover most of the course with the camera though. Mark, who is head of South Georgia science, takes on the steep descent of Brown Mountain here. Base visible on the right of the shot. 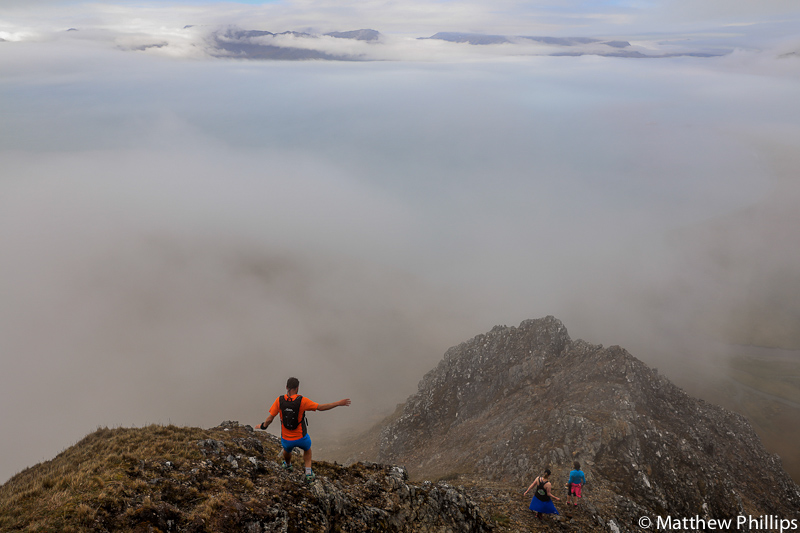 Jerry this time, a little lower down the same descent but by this time the cloud had really rolled into the bay. You can just see the peaks of the Barff Peninsula poking through the cloud. Lorna and Jo from the museum are just ahead of Jerry. The runners and walkers start an hour apart so most people finish about the same time. 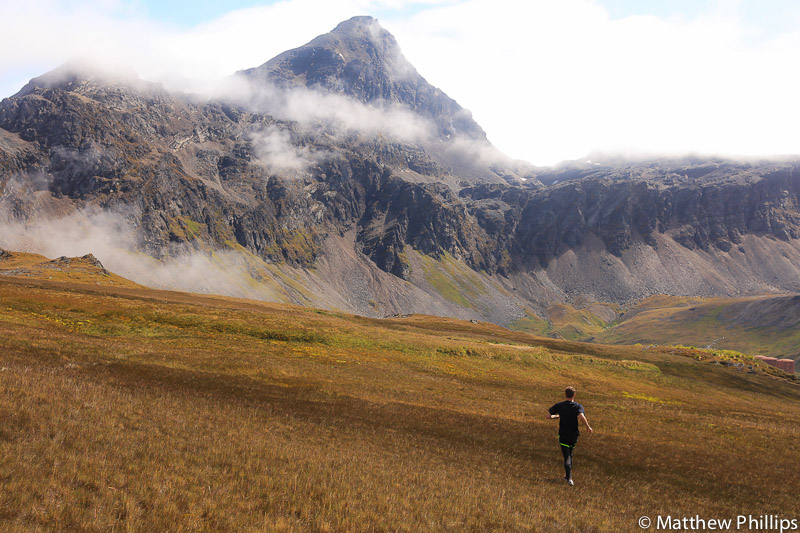 After the descent of Brown mountain it’s over Brown Flats, through Grytviken whaling station before returning to base and then heading out on the second half of the course. After most people had navigated the mountain the weather started to improve, typical! 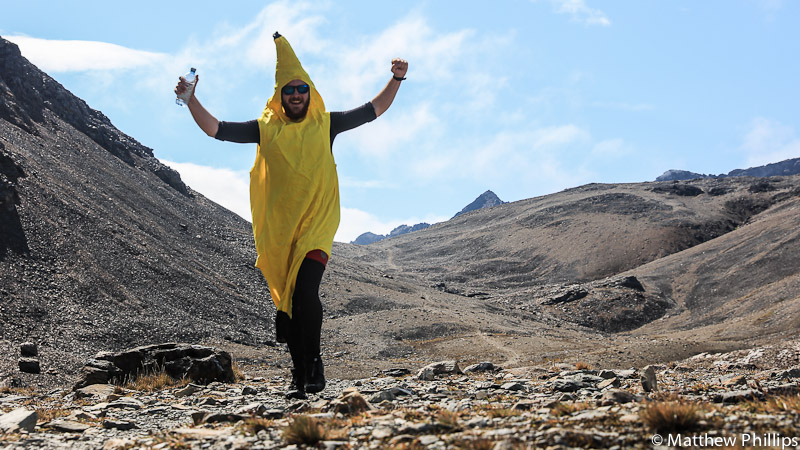 I skipped the return to base part and went up to Bore Valley to get some pictures of people passing though there. Kieran was the first person I saw, he was also the fastest fruit through the course. You can see the track leading to Deadman’s Cairn to the right of Kieran. From the top it’s another kilometre to Maiviken Hut where you turn and head for base and the finish.

Simon (Government Officer) flew down the descent into Bore Valley. He went on to win for the third year in a row. 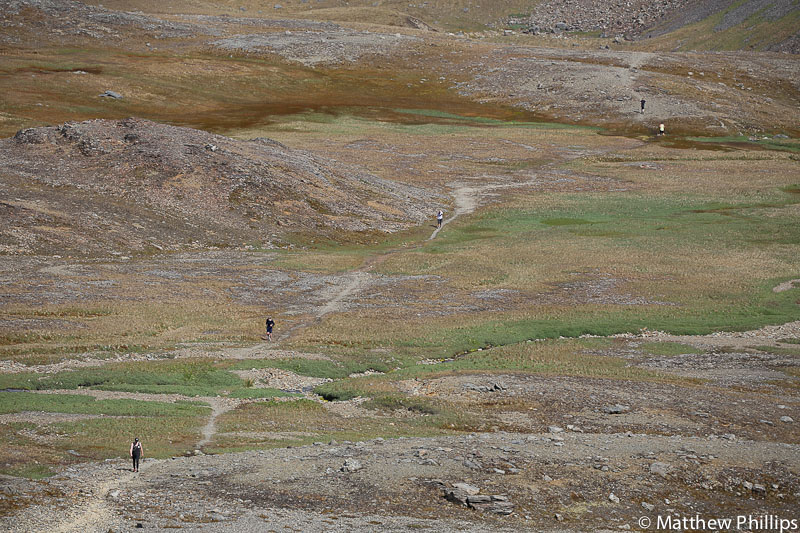 From close to Deadman’s I had a good view down into the floor of Bore Valley. The traffic picked up at one point as various people passed each other, either on their way in or out. 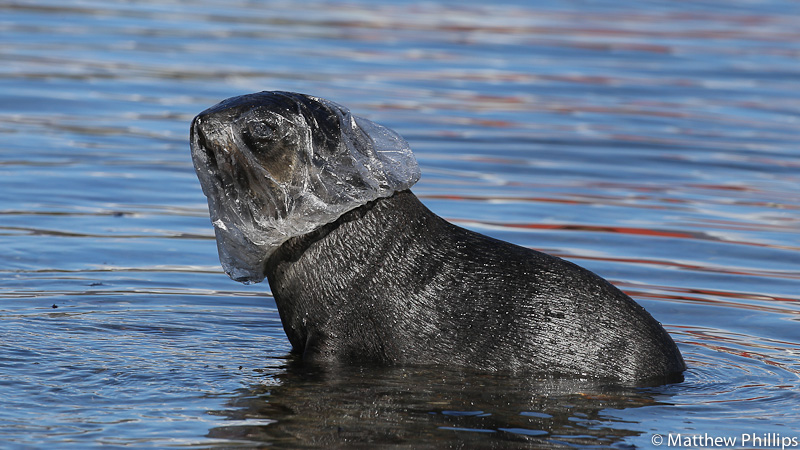 Heading back along the track to base I saw a seal acting strangely in the water. After a closer look with the telephoto lense I saw what was bothering him! We don’t get much rubbish here, almost everything we get is blown in off the sea. While you aren’t meant to interfere with wildlife I thought it was reasonable to this time. I waited till he was well out of the water to chase him down and get the shower cap off. He was still fairly quick and could see where he was going, he ran pretty quickly when I went for him. He must have been thinking his day couldn’t get much worse when he had the cap on his head… then he gets chased by a human! 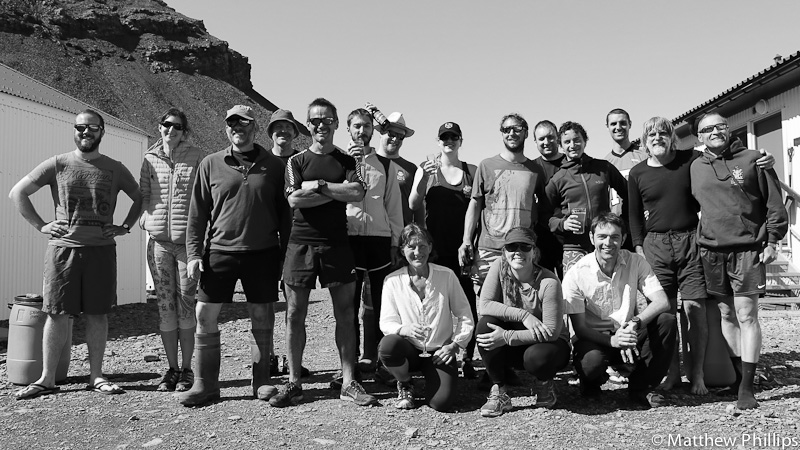 There were a few weary bodies at the finish line but everyone enjoyed it and it ended up being a fairly stunning day.

Paddy (other boating officer) got back at the end of the month, which instantly took some weight off my shoulders. My intentions were to complete his induction training (as it was cut short before) and then get myself away on holiday! More on that next month…