A galavanting outdoor type who loves the polar regions, Hong Kong and my home country - Scotland. As well as loving the outdoor I'm also fond of a pint of lager and occasionally having a good sit!

Right, I think I’ve got the ball rolling again! 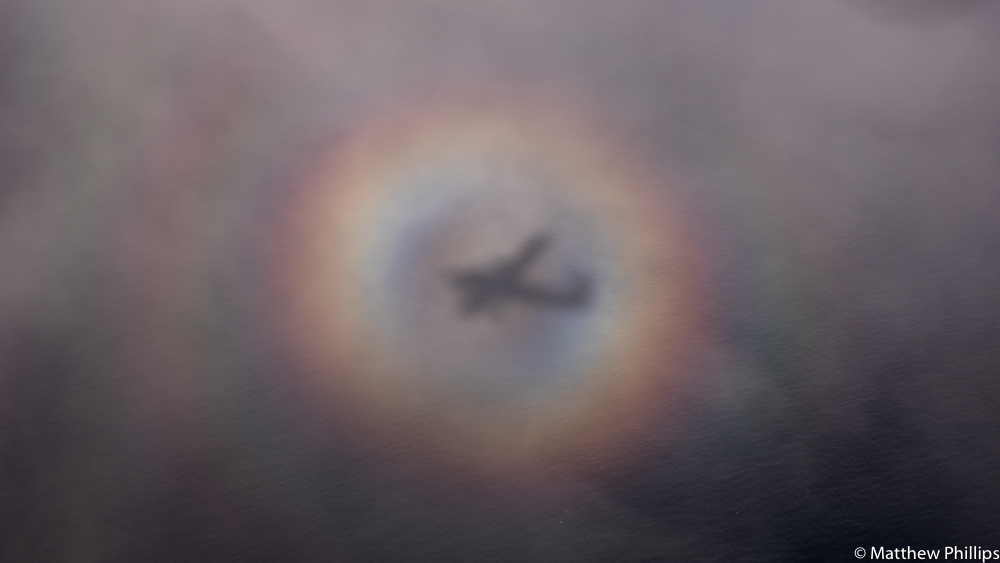 Fossil Bluff is 258 miles south of Rothera and is situated on Alexander island, the largest island in Antarctica. It’s run by two people from Rothera, on a rotational basis of roughly two weeks. It’s only open during the summer months and is essentially a petrol station for the Twin Otters flying to the Antarctic interior. 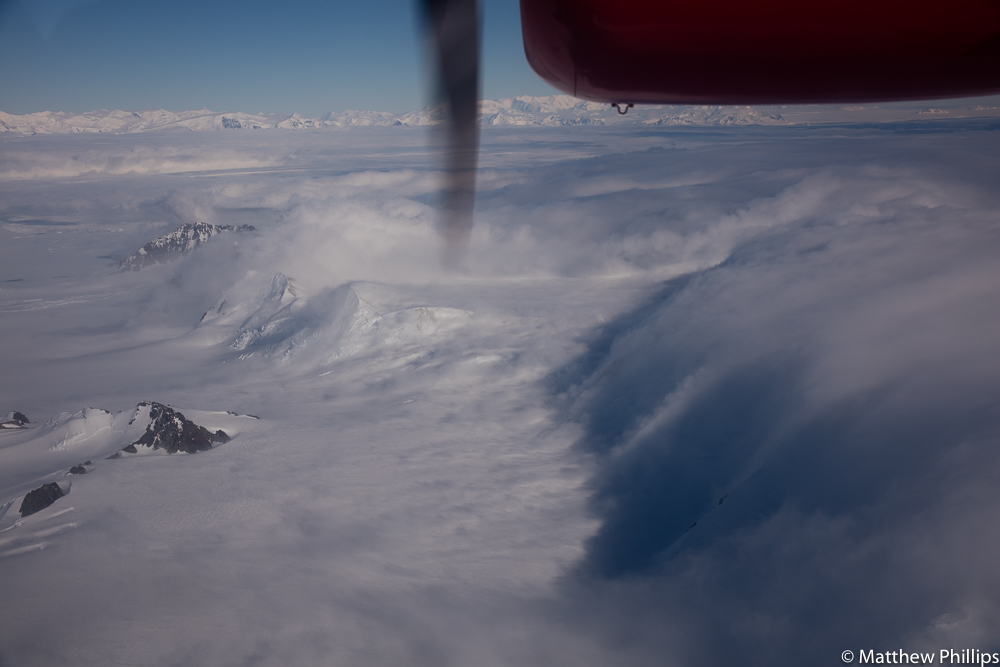 Flying down the edge of the Antarctic peninsula is awe-inspiring, if the cloud allows a decent view. The Twin Otters aren’t pressurised so they fly at relatively low altitudes of around 12,000ft and have a top speed of about 160mph, so while they aren’t fast at least you get to enjoy the view. 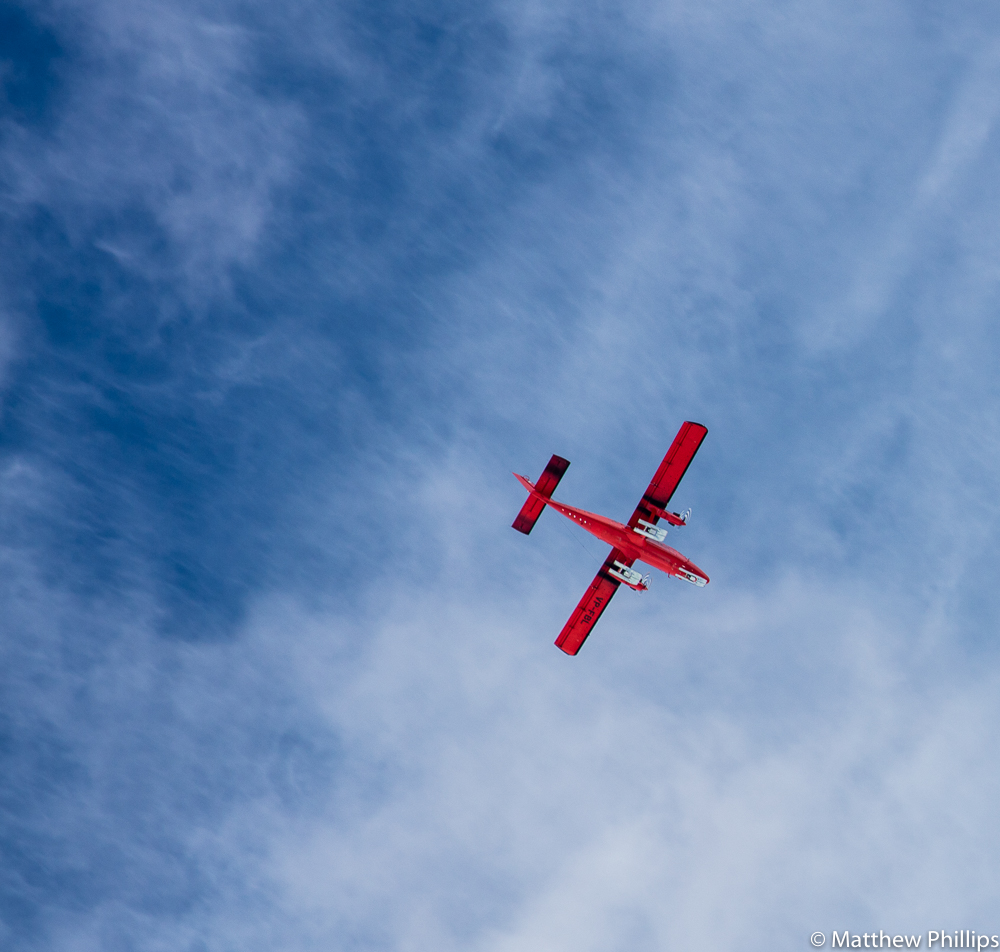 It takes the Otters about 1hr 45min to fly from Rothera to Fossil Bluff. Once on the ground they usually refuel fairly quickly and get on their way again. Leaving you and one other on the island… hundreds of miles from the next person. 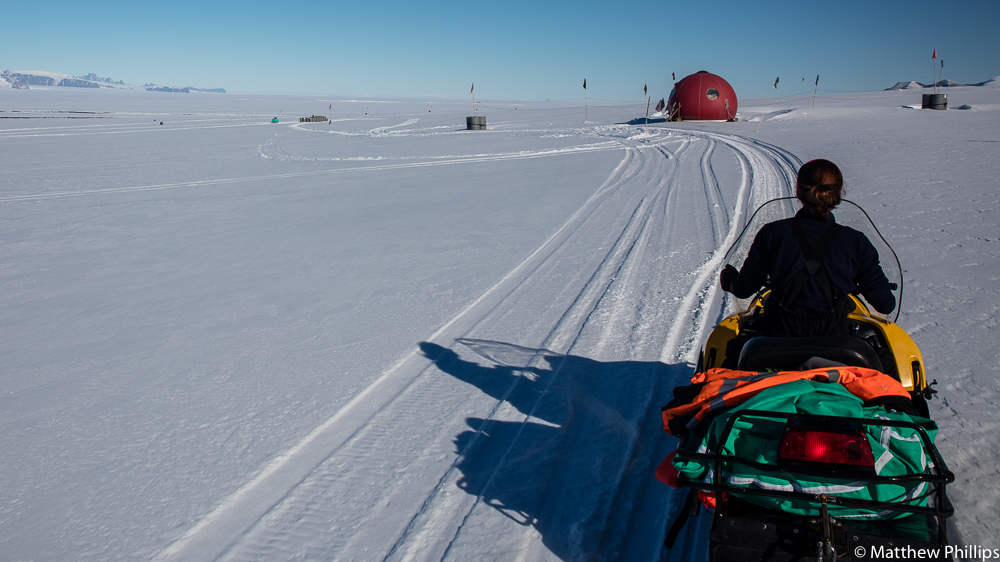 Your time at the Bluff is largely dependent on the other person and how well you get on. Fortunately I was going to be with Dee, who I worked with on South Georgia back in 2014, so I knew going in we would be alright. The ski-way (basically a runway for planes that have skis on for the snow and ice) is marked out with flags and has a small ‘apple hut’ near it for short term refuge. You can also call Rothera from a HF radio set. 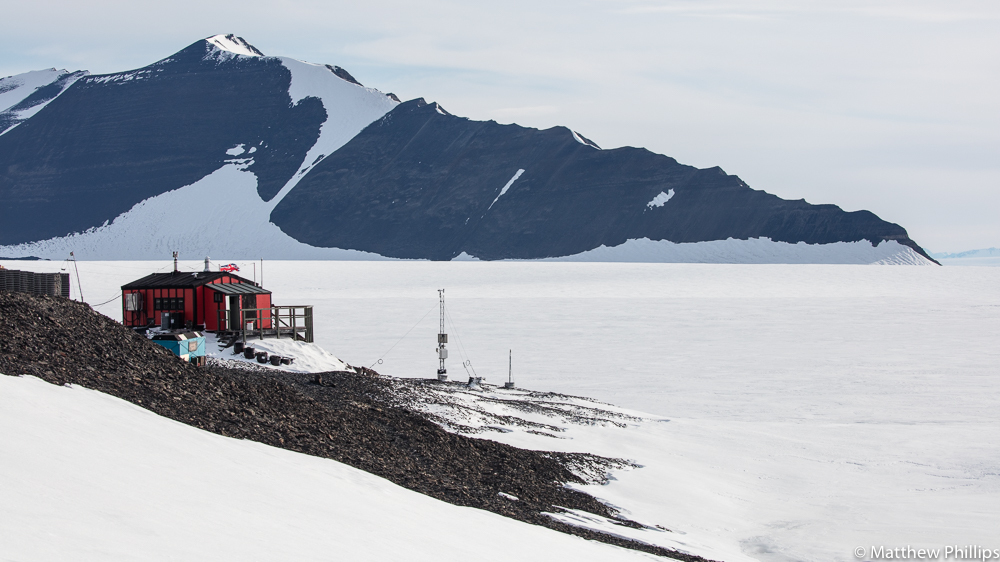 The main accommodation is Bluebell Cottage. It has been there since 1961 when three BAS personnel travelled down and got unintentionally stuck here for a winter. One of the winterers, Cliff Pearce, wrote a book about it called ‘The Silent Sound’. The edge of  the frozen sound that separates Alexander island and the Antarctic peninsula starts just at the right of the picture, at the base of Georgian Cliffs. Apparently when the three were joined/rescued at the start of the following summer, they had put a sign at the bottom of the cliffs that said ‘Tea and Scones next right!’ 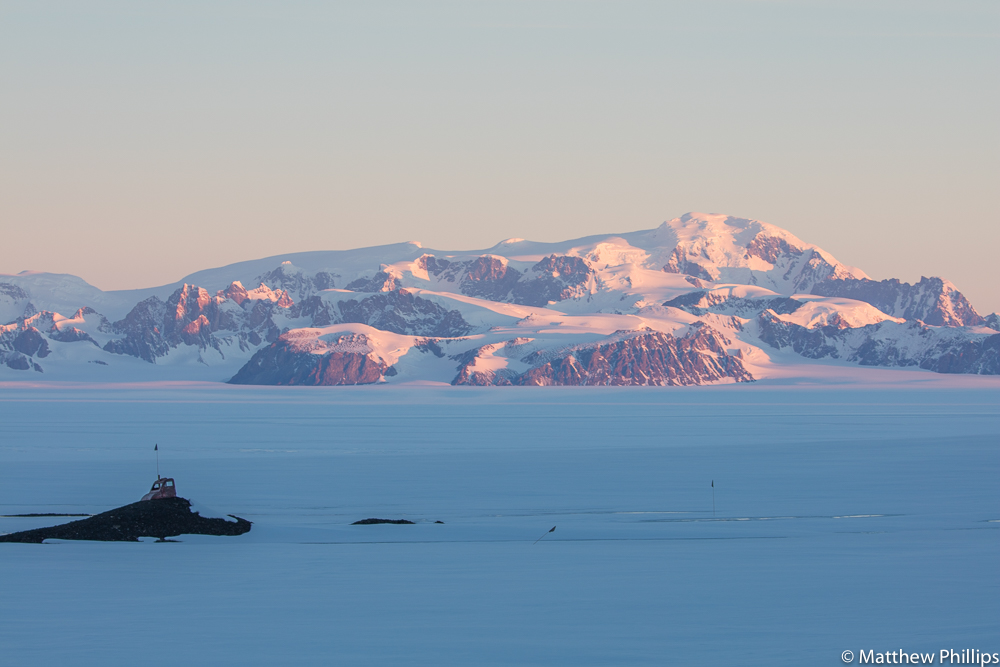 The view from the front of the cottage is amazing. The peaks in the photo are about 40 kilometres away. The small structure on the hill in the foreground is a cab from one of the vehicles used to travel over the ice all those years ago. 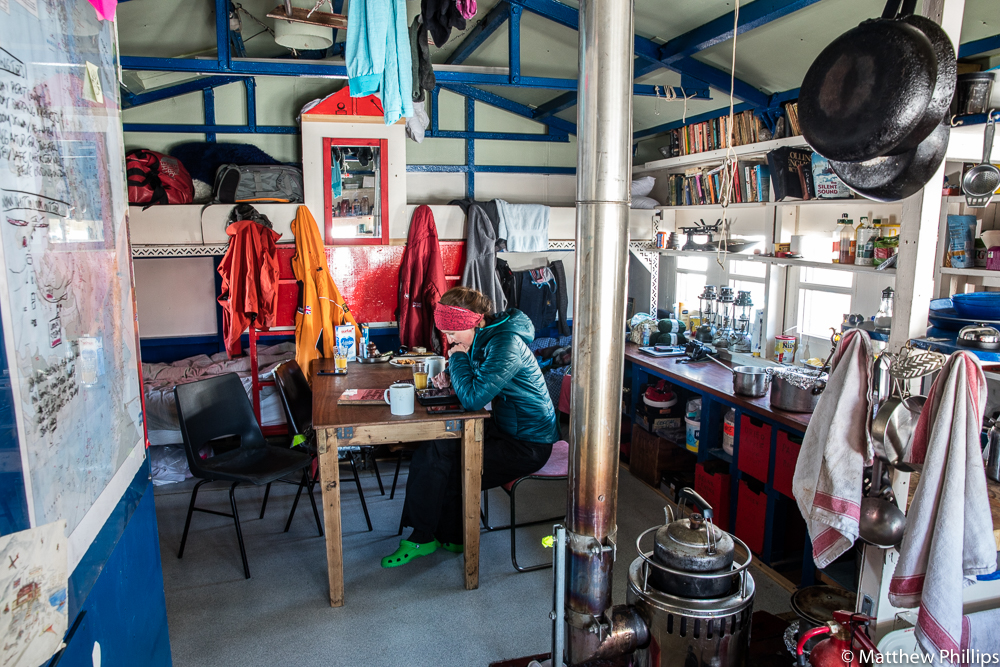 Inside the cottage is a little like a posh bothy (mountain hut in the UK). There is power provided by a small petrol generator outside and a Refleks stove for heating the cottage and cooking on. There are four bunks in the main room and room for another two in a separate room. There are toilets but it’s a case of doing your business in a big plastic tub that has a screw-on lid that you then take out with you and back to Rothera at the end of your time. 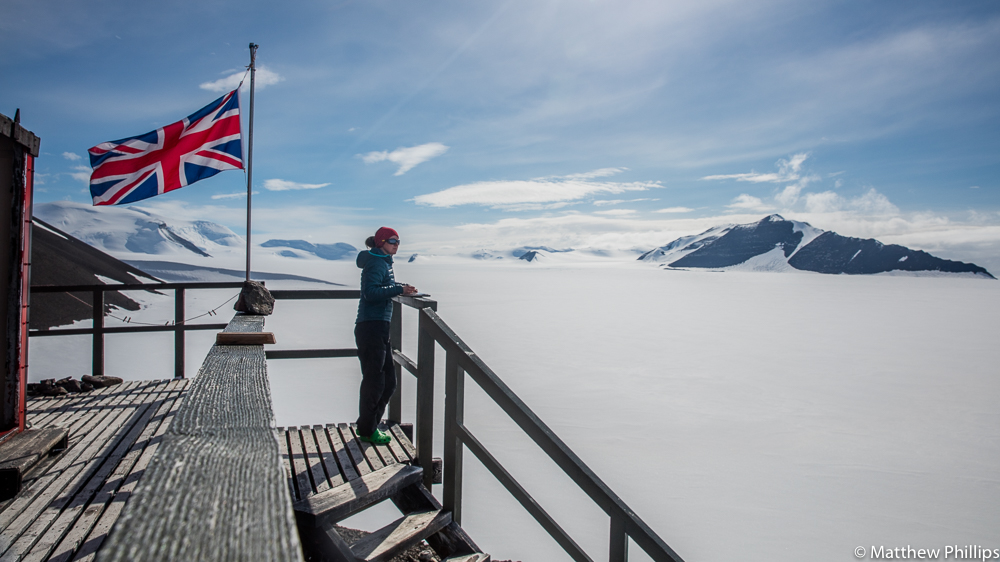 The deck of the cottage has an amazing view and can get surprisingly warm! If there is flying out of Rothera you are expected to do weather observations (that’s what Dee’s doing here) every hour and relay your findings back to the Rothera Tower, via HF or satellite phone, to assist flying operations. If the Otters are light they can skip Fossil Bluff but it’s always good to have a backup. If baby wipes aren’t satisfactorily cleaning you the other option is to get a basin of hot water and give yourself a bit of a shower. By standing in the basin and using a cup to pour hot water on yourself you can have a quick shower and a very quick scrub! I did it a couple of times and both times it was one of the best showering experiences I’ve had. 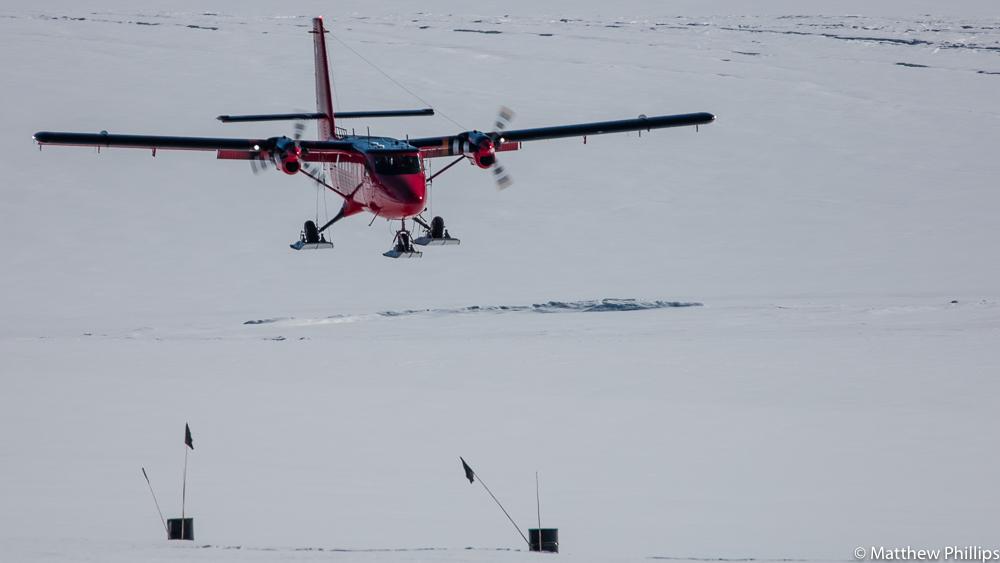 Twin Otters have been around for over 50 years and have been a major part of polar travel during that time. They aren’t fast but they can carry a lot and handle almost anything that’s thrown at them. It’s always a little concerning watching them come in to land as they dip their noses until they are about 5m off the ground. 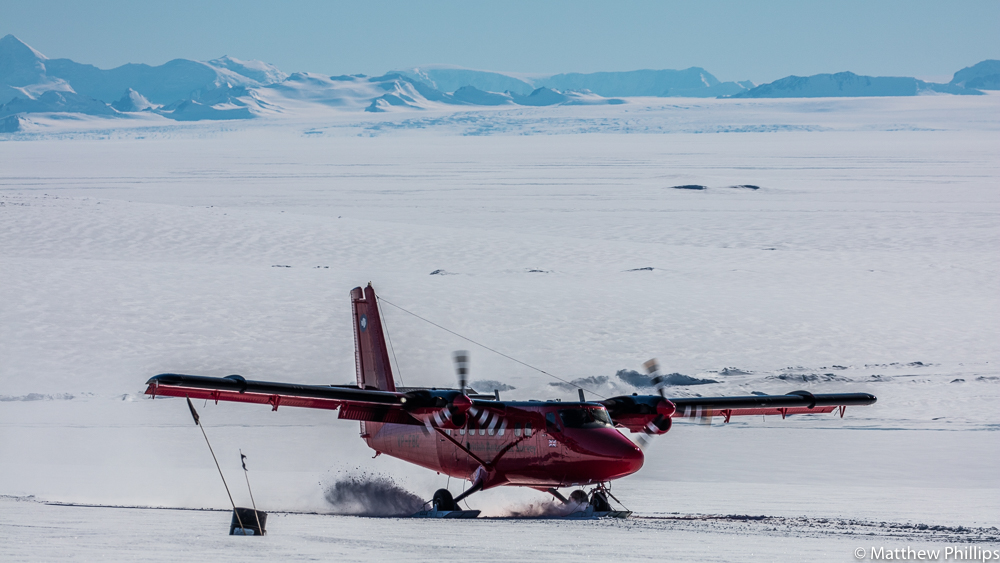 They always land safely though. 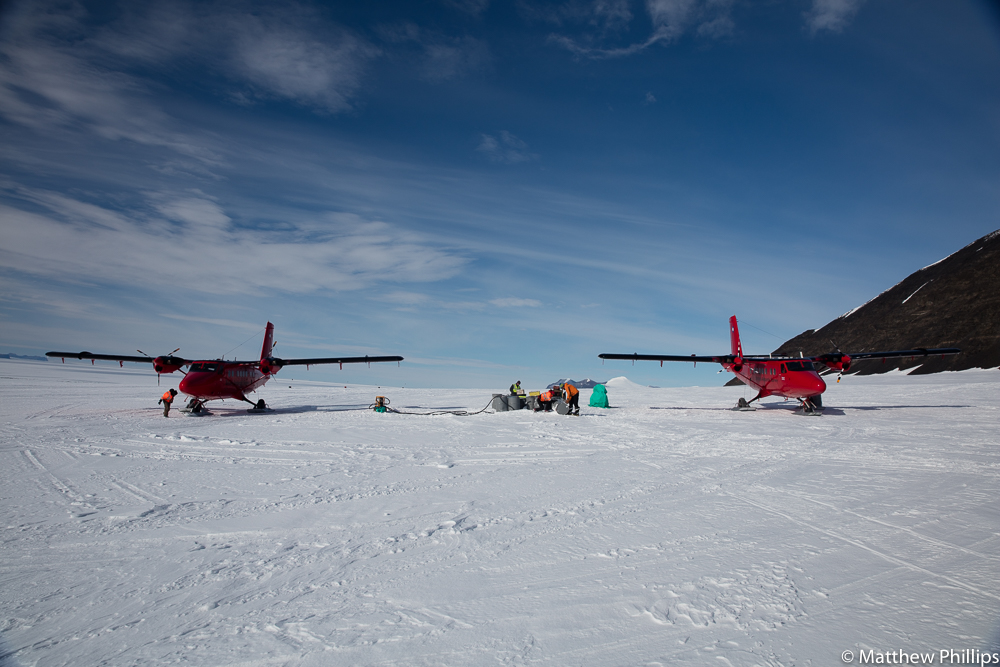 BAS have four Twin Otters and it’s not uncommon to find two of them at Fossil Bluff refuelling at some point in the day. Sometimes when the fuel barrels run low an Otter will come down with 5 new barrels to top us up. Moving 200kg barrels around in the snow can be physical work. It keeps you warm though! 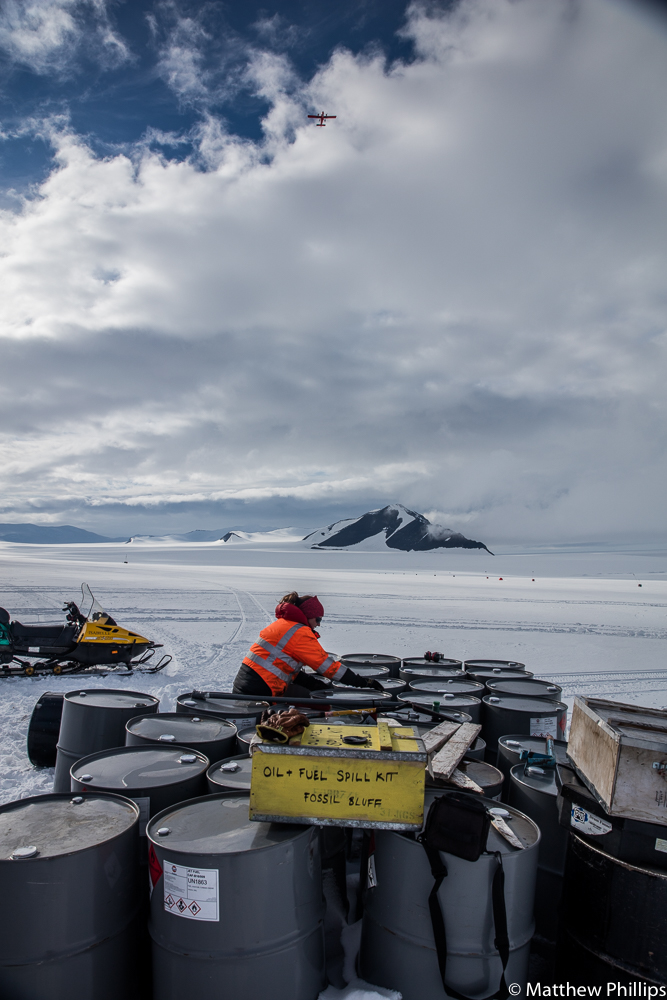 By the time you’ve tidied up the refueling kit the Otters are normally already in the air. 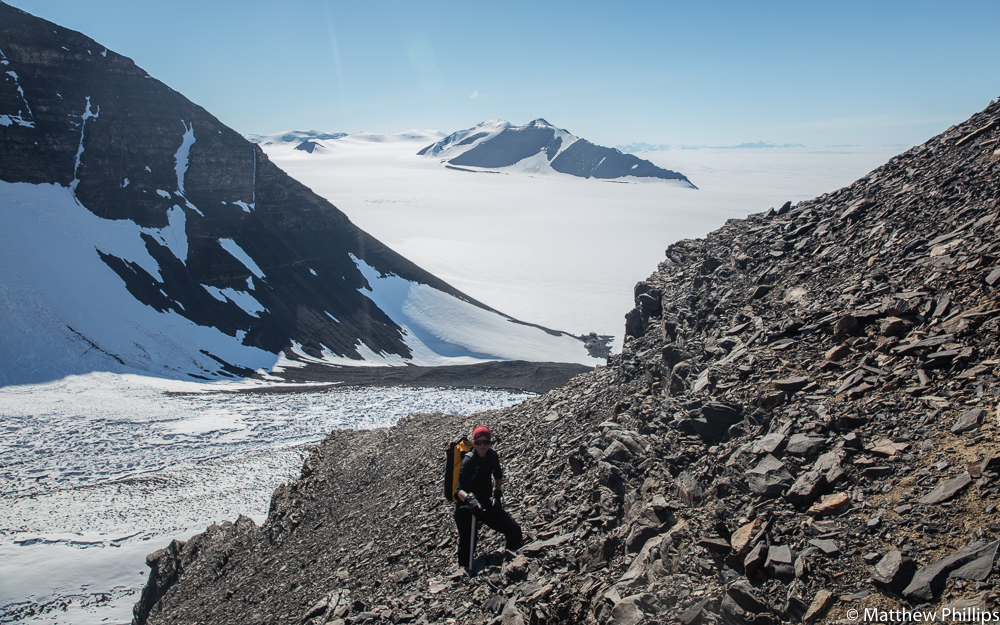 If the weather is good there there is normally flying out of Rothera. We had about 40 people dedicated to Rothera this summer. Anyone who is in ‘deep field’ on a science project is considered to be dedicated to Rothera. You also have the electronic engineers and meteorologists going out to their sites to service Automatic Weather Stations (AWS). Every now and then there is a ‘no-fly day’ which means everyone involved in flying operations generally gets the day off. Dee and I got a no fly day with some spectacular weather. There is a travel limit at Fossil Bluff which includes several peaks to climb. It’s possible to do them all in a day if you are fit enough. You might just be able to make out the cottage at the bottom of the hill immediately behind Dee in this picture. 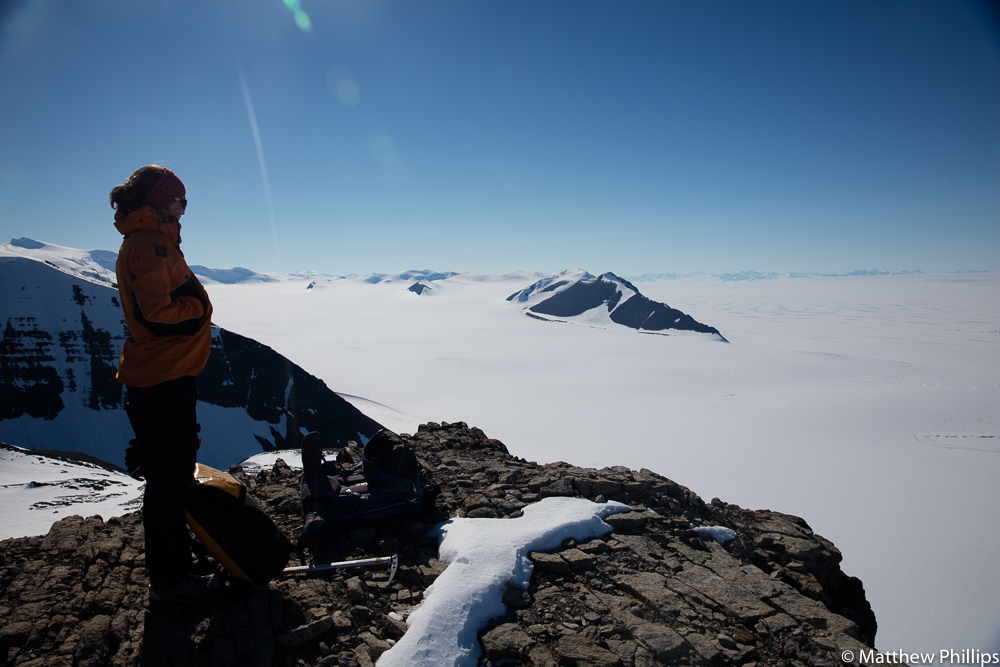 What a privilege to be able to explore somewhere like this. BAS have, what I think is, a very healthy approach to recreation when you are south. Many other national programs don’t allow skiing, snowboarding or any extra outdoor recreation as the risks are considered too high in such an extreme environment. BAS recognise the value of letting people do these things as it keeps you fit but also stops a few people getting cabin fever… probably, most of the time…maybe. I also think people will do these things so helping them do it safely is probably the best option. 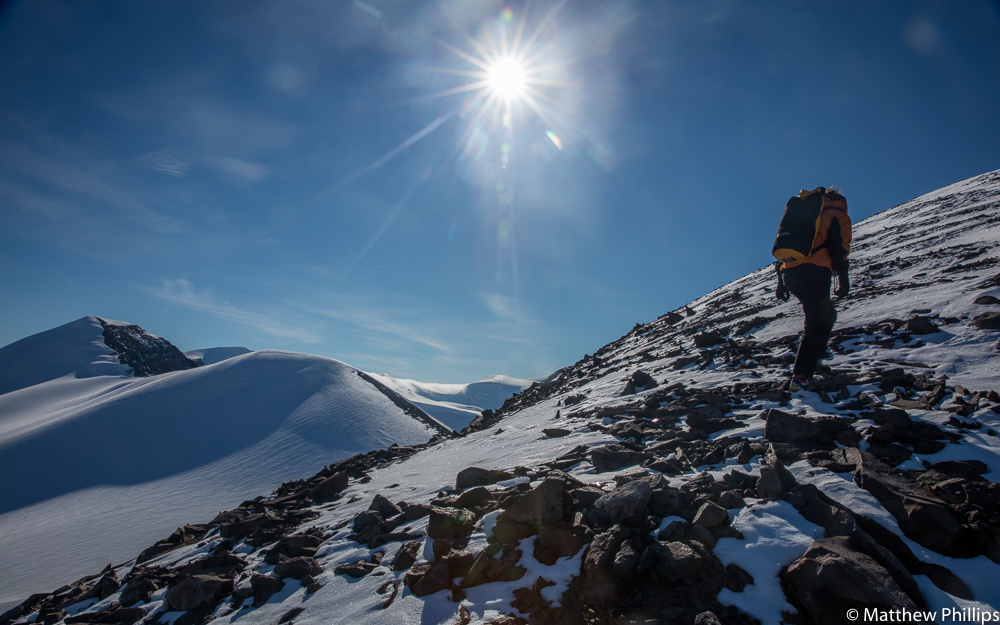 Dee making her way up Khufu 670m (all the peaks have an ancient Egypt theme), the highest of the peaks in the travel area. 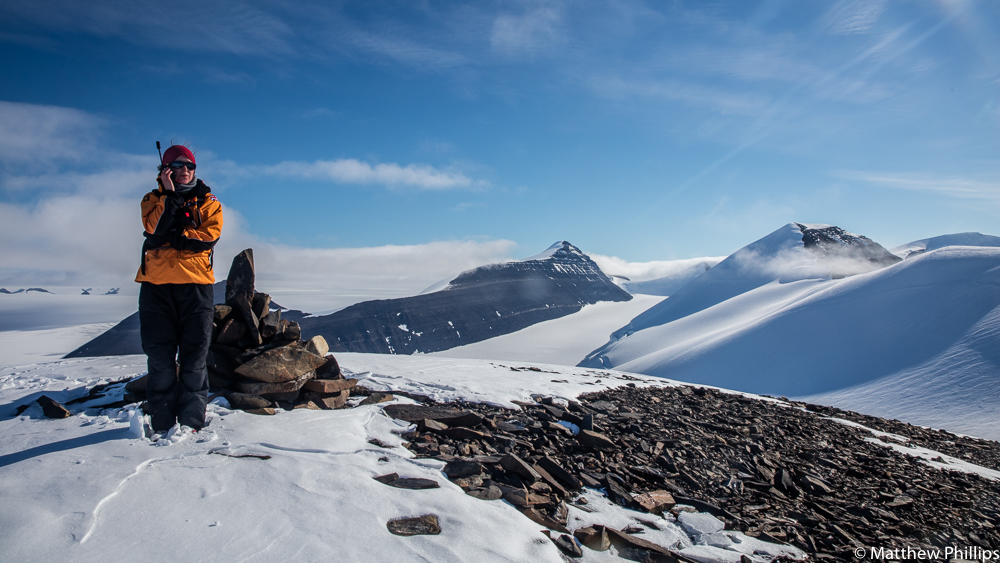 Even though it was a no fly day, Rothera still like to hear from you every few hours to check you are ok. 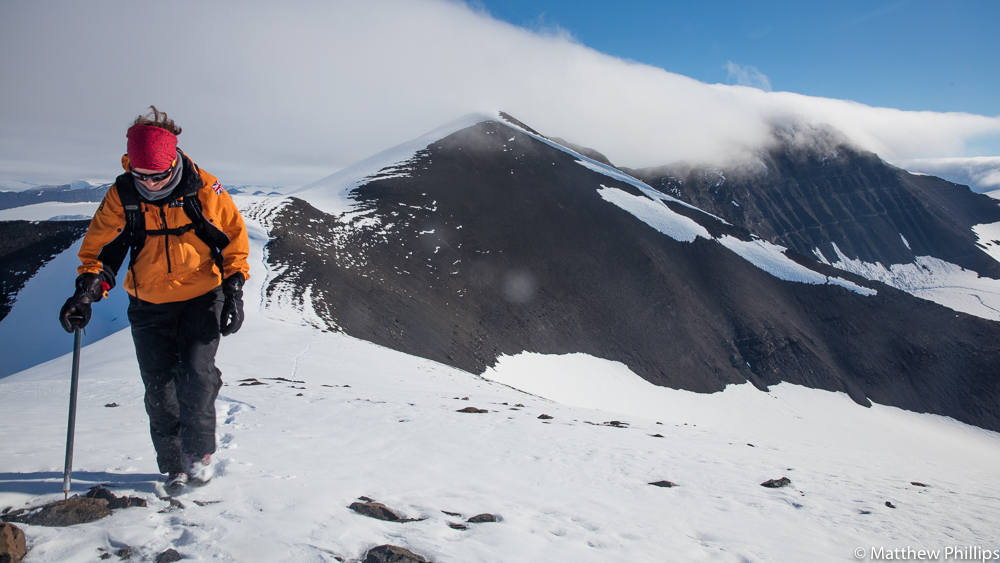 The cloud had threatened to come in during the last few hours but never did. 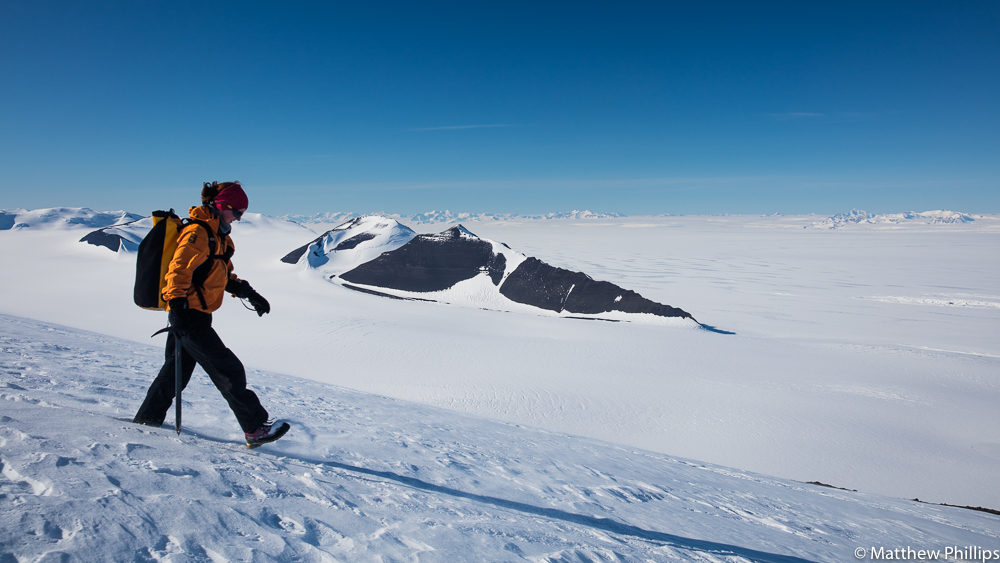 Heading off the last peak we knew the slope would lead right to the cottage and that the slope was largely loose scree. 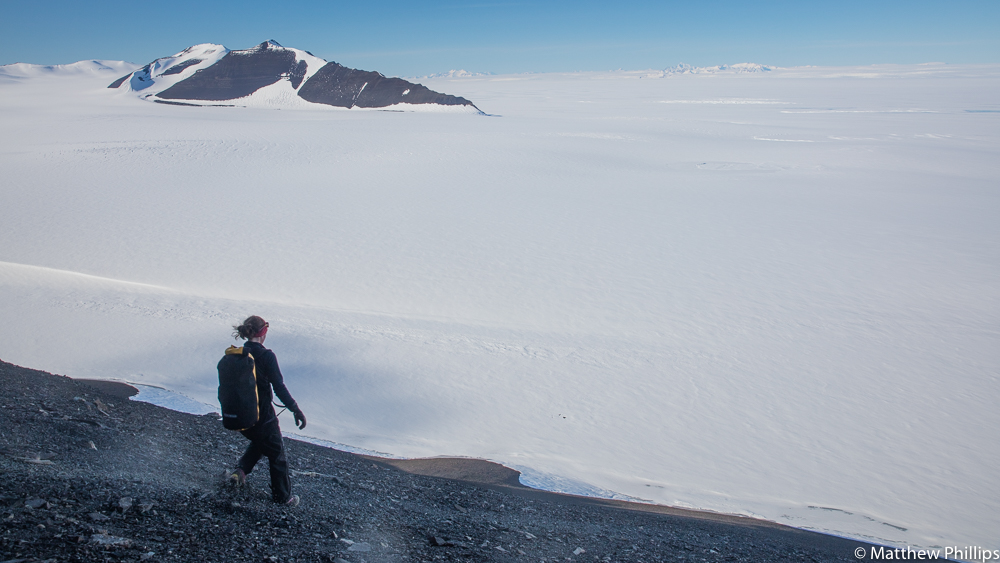 There is good and bad scree. Good scree is a joy to run down and, despite my years, I still  get an unhealthy (probably) satisfaction from running down it. 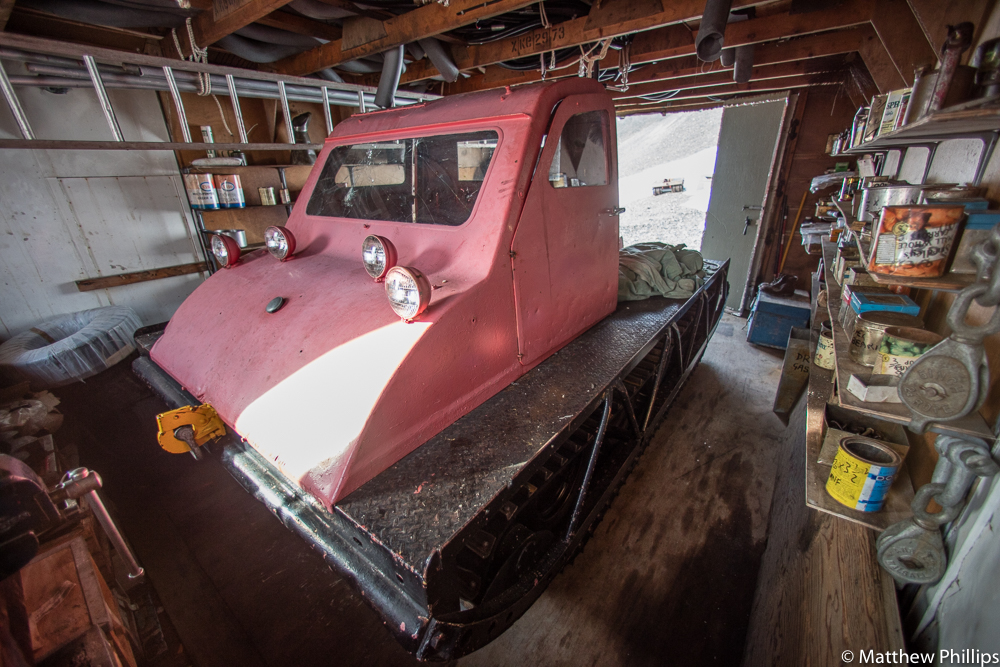 One of the three Muskeg vehicles that made the journey in 1961 is kept in a hut behind the cottage and is almost like a museum exhibit. Hardly the lightest looking vehicle, not sure how safe I’d feel crossing a glacier in one! 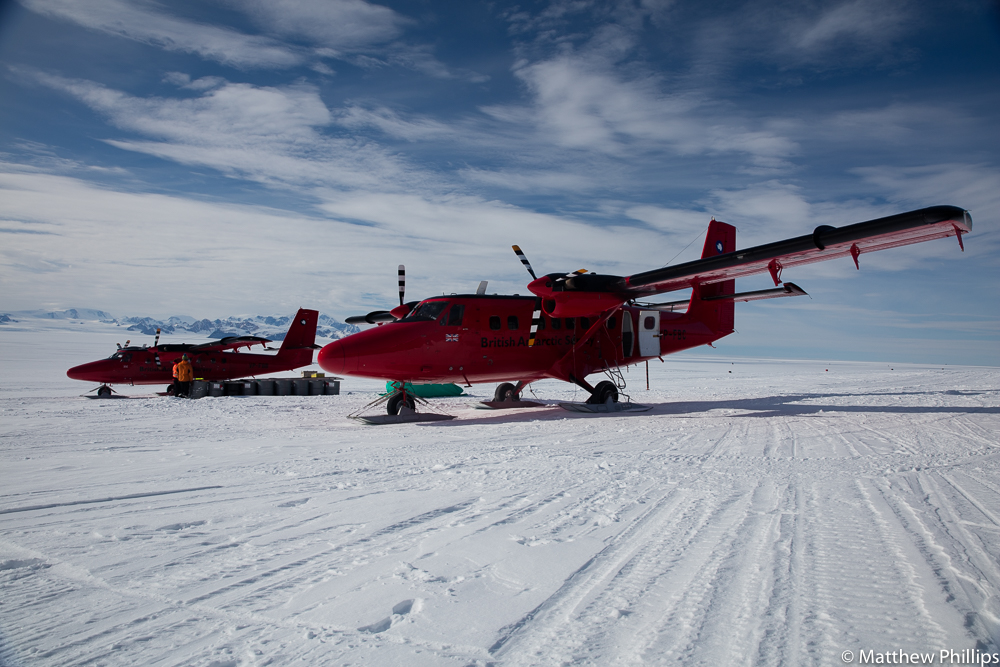 More double Twin Otter visits. This time one was my taxi back to Rothera. 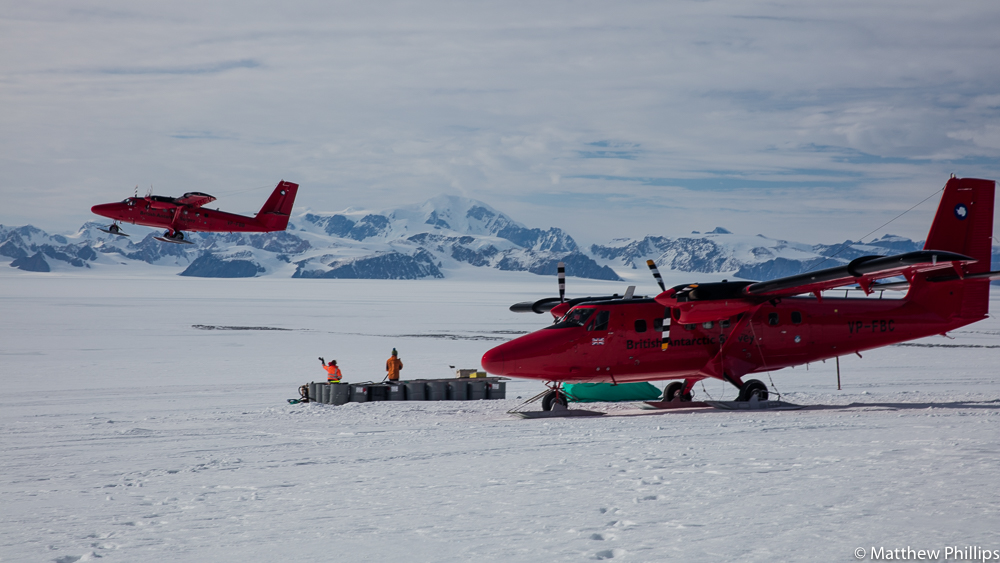 I had eleven days at the Bluff in the end, long enough to recharge my batteries. I would have happily stayed longer. 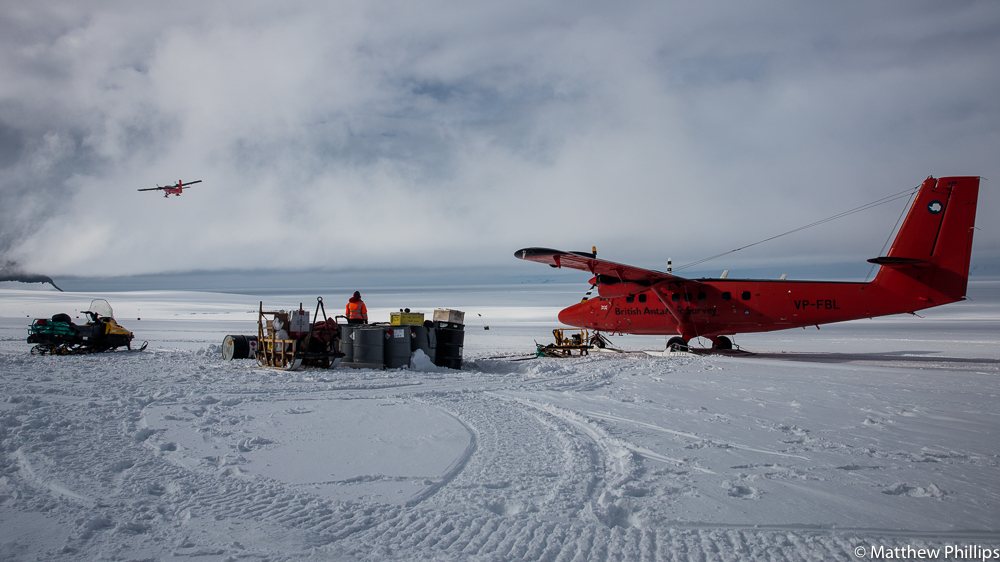 I might have had my fingers crossed at this point. If the cloud comes in the aircraft can’t take off. 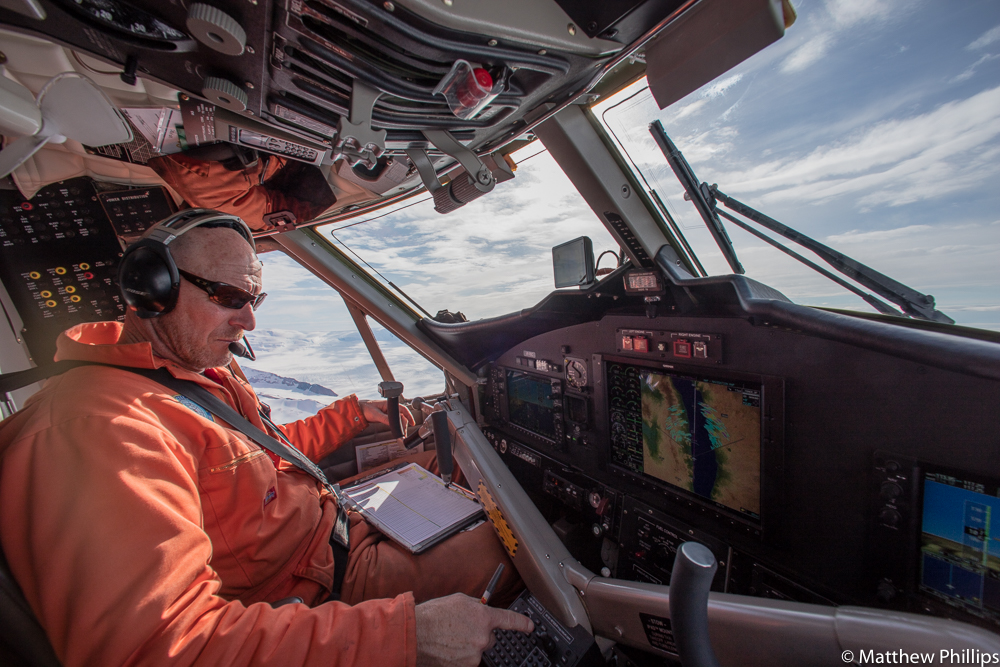 We did get away before the weather caused any trouble. I had Al as my pilot, he’s great craic and, like most of the pilots, is a good source of gossip! I think when people get in the aircraft and take off the pilots get bombarded with with everything that’s been building up in peoples’ heads. I’m sure they could write a great book of short stories between them. 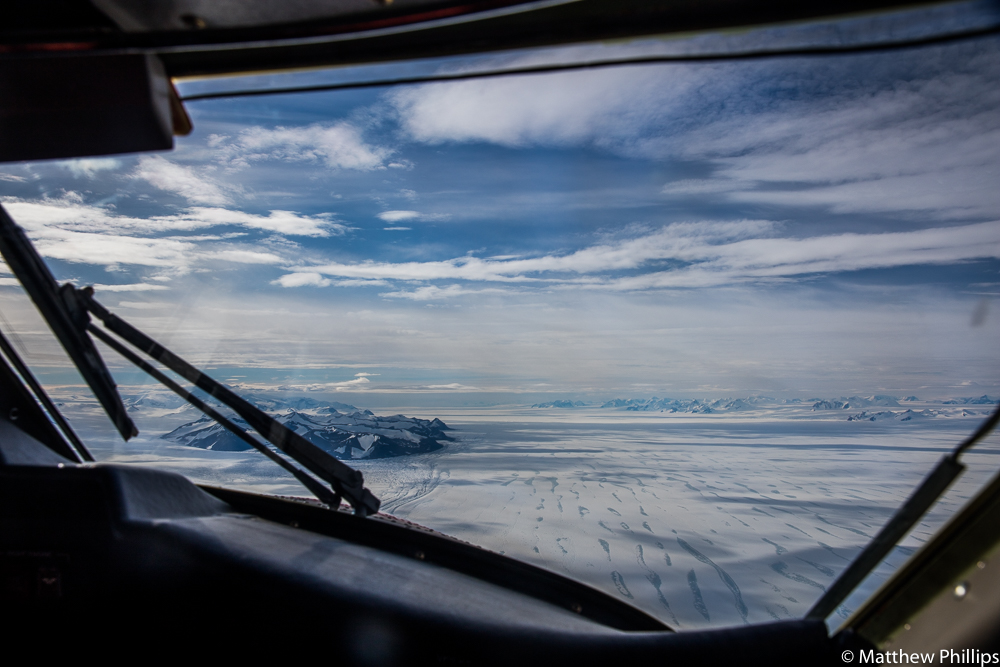 Flying up the frozen sound gives some great views. You can make out the shallow melt pools on the ice below. One of the great things about Rothera is getting to co-pilot. If conditions allow and you are happy to, you get to fly the plane. The Twin Otters don’t have an auto-pilot so the pilots are normally quite happy to share the workload. 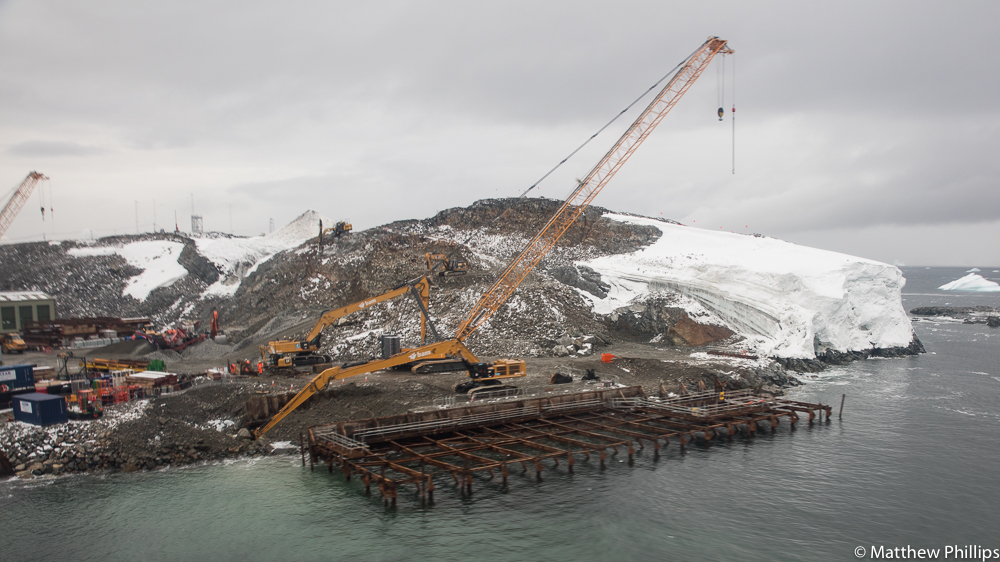 The weather at Rothera wasn’t as good but there was a massive difference in the wharf. That’s the framework of the old one. It wasn’t long after they had all that out too.

There is a small chance that I’ll get another stint at the Bluff early in the summer season, when I’ve completed my handover to my replacement. I think there is some amazing skiing to be done slightly earlier in the season, when the slopes still have snow on them.