South Georgia – The end has come…

My dear readers, what might be apparent from the title of this blog post is that I’ve been quite devious over that last five or six months. I’ve been feeding people the lie that I’ll be back at the end of August but that was never the plan, I hope you forgive me! As I write this I left my frozen paradise eight days ago, and I’m traveling north at 586mph, 41,000 feet above the South Atlantic Ocean on a military flight making my way, somewhat stealthily, back to the UK.

My hope is that on Friday (17th) I will surprise my family at a restaurant in Edinburgh late in the afternoon, only my sister in-law (to be!) is aware of my guest appearance at this lunch – someone had to help with the deception!

This means that this will be my last blog post from South Georgia, well…for the time being. I don’t like the thought of never going back. 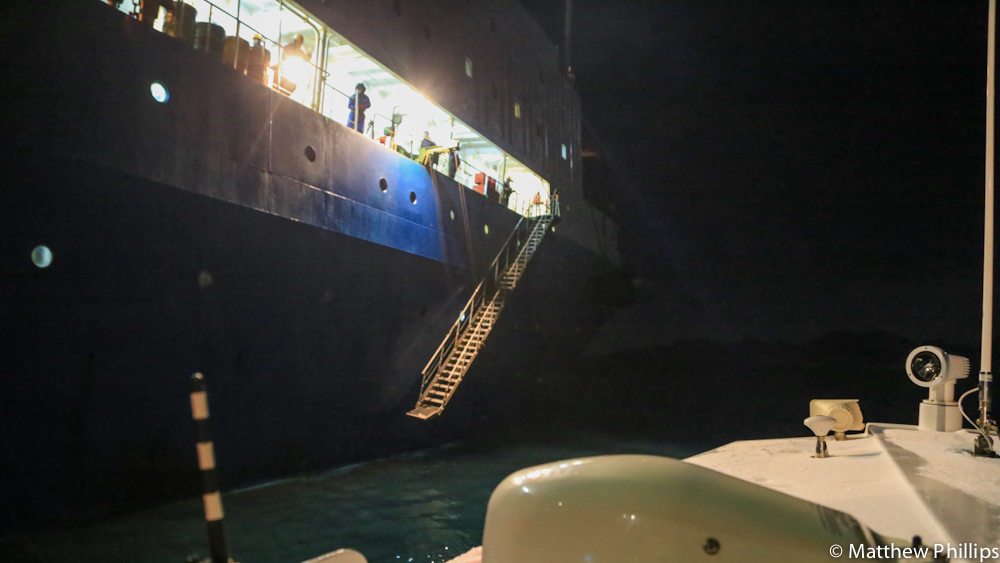 One of the last bits of boat work I did was to get an ill observer onto one of the krill ships that was about to return to the Falklands. They could only make it in early evening so it meant some night boating. I think they were expecting someone who was quite poorly and put the accommodation ladder down rather than a pilot ladder. A nice thought but it made my job a little trickier than I would have liked. The platform at the bottom was about six inches higher than the fenders at the side of the jet boat, so if I made contact with it I would have damaged the side of the cabin (depending how hard I hit it). I managed to get him and his bags off as well as Steve (GO) on and off without making contact once – I’m fairly chuffed with myself about that! 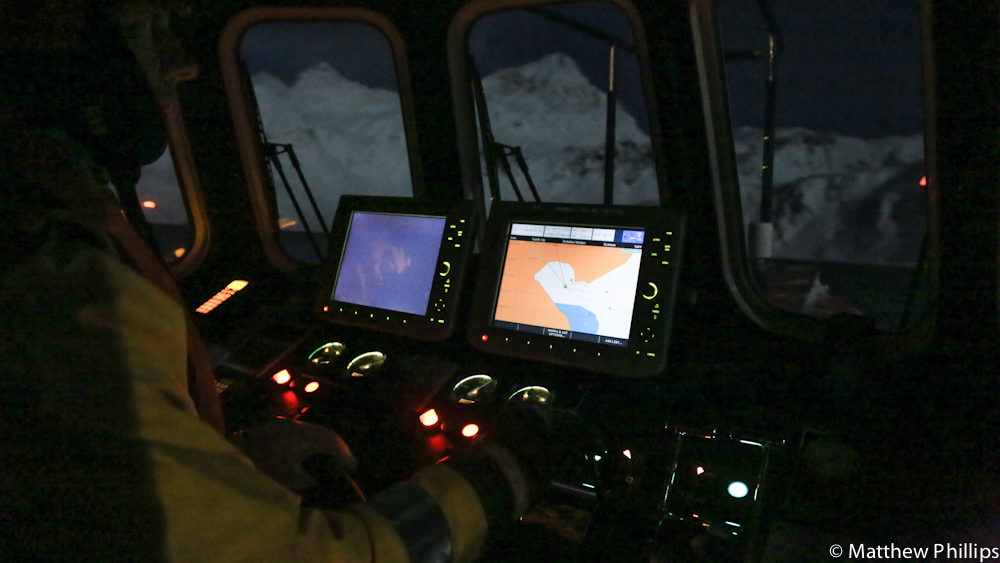 Other than the transfer part I’d let Emma and Ian do the boating as it was a good training opportunity for them. The moon was out so the visibility was actually quite good. 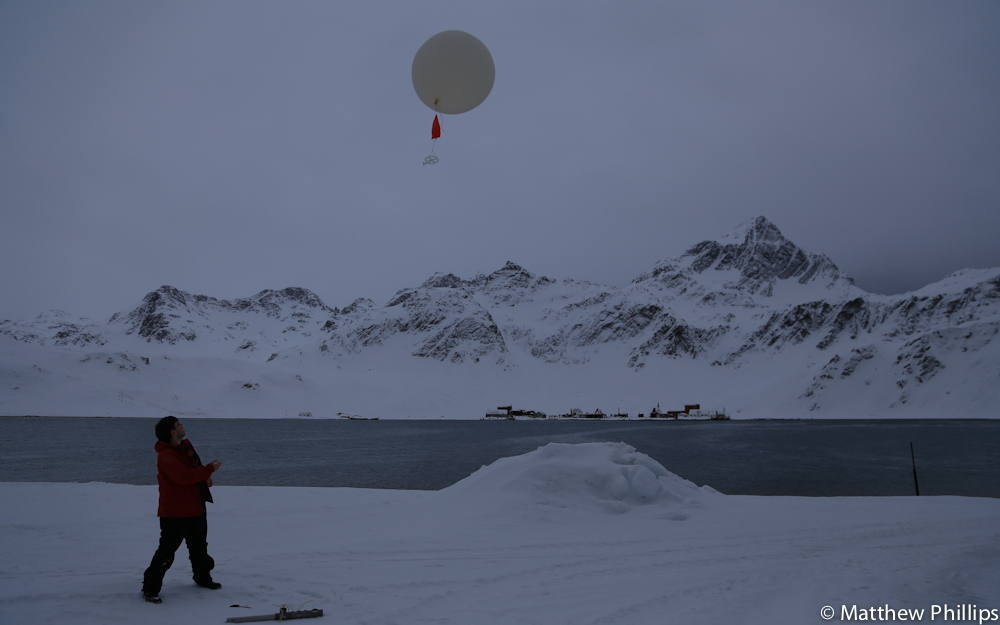 Here is Corwin releasing his last balloon. The balloons will go about 20 km high into the atmosphere and swell to about the size of a double decker bus by the time they reach that height. Quoting Corwin here: “It’s reassuring proof on the durability of latex”. 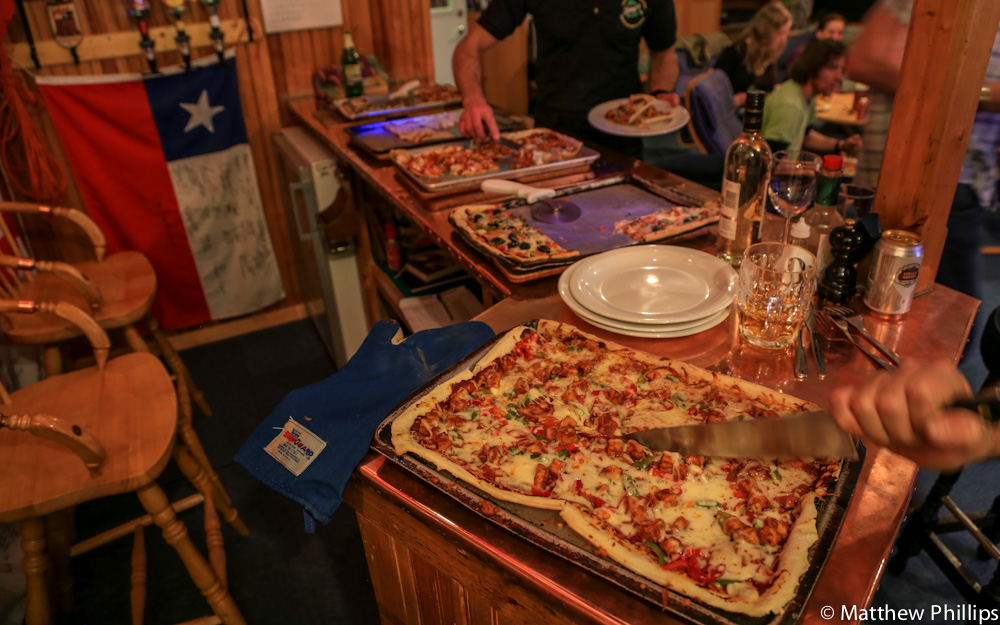 I was on earlies on my last day – thanks Ian (only joking)! So I made my crowd pleasing pizzas. I understand that Ray has already taken up the mantle of pizza maker now. My only advice is that you let Erny choose 5 toppings max! He gets very close to double figures with toppings and is particular about it i.e ‘crispy bacon’. Haha sorry Erny! 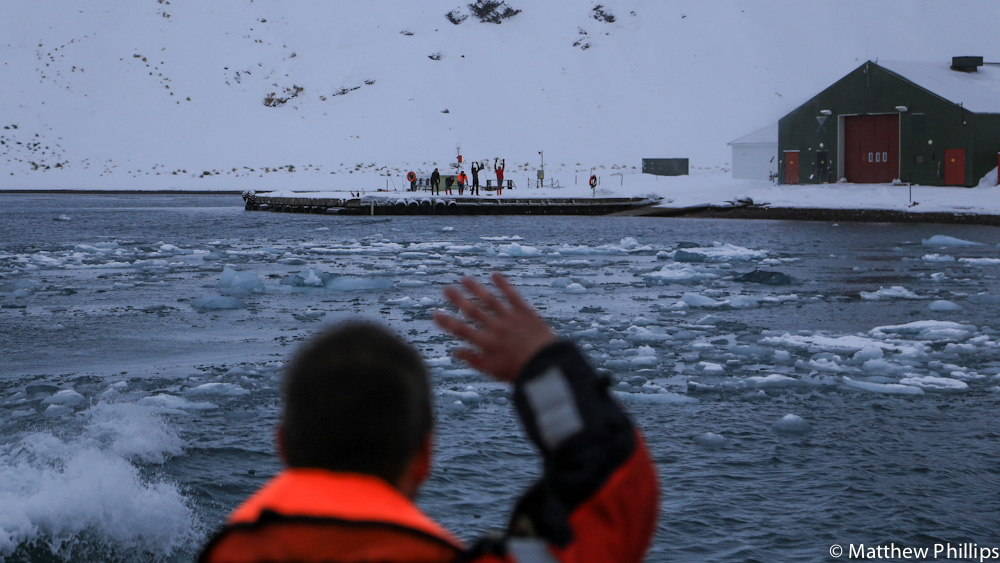 This was the moment the umbilical cord was cut. After 20 months or 598 days on the Island my time was brought to an end as I was taken by jet boat to the ‘big red taxi’ (Pharos) end my lengthy journey home started. 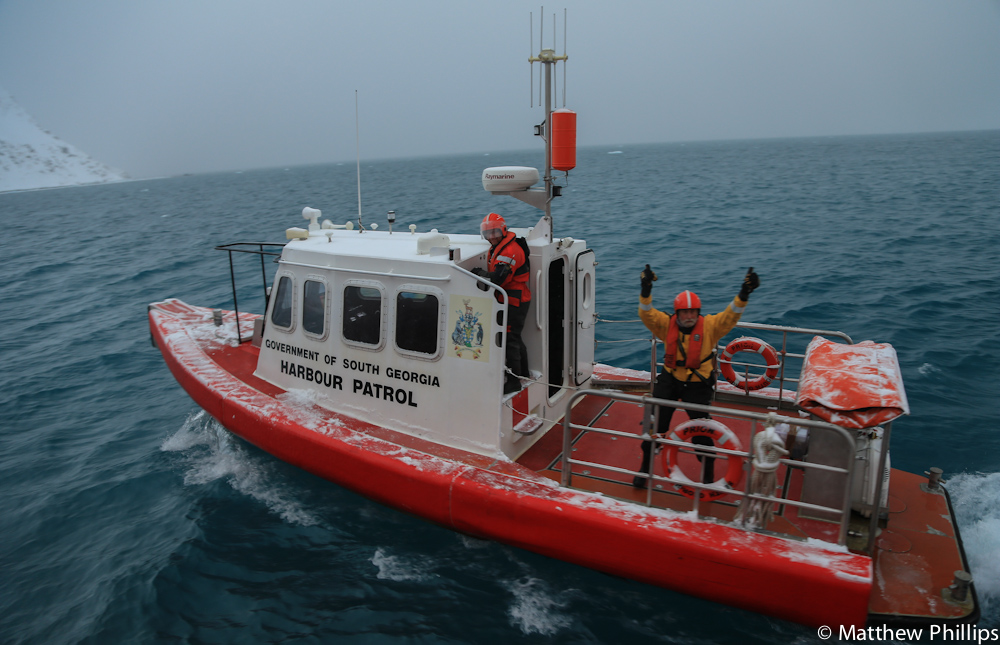 I’ve been the one to take people to the Pharos, for their journey home, on so many occasions and I knew I’d be on the receiving end one day (Adam and Ray doing the honours here). It still didn’t prepare me for it. Not that I had much time to dwell on it, the Pharos raced out of Cumberland bay and out to the krill trawlers for inspections. So it wasn’t long before I was back in a small boat being transferred to another ship so I could act as a witness for Simon. By the time that was done and we were back on the Pharos the cloud had dropped and taken any hope of a last glimpse of the island from me. 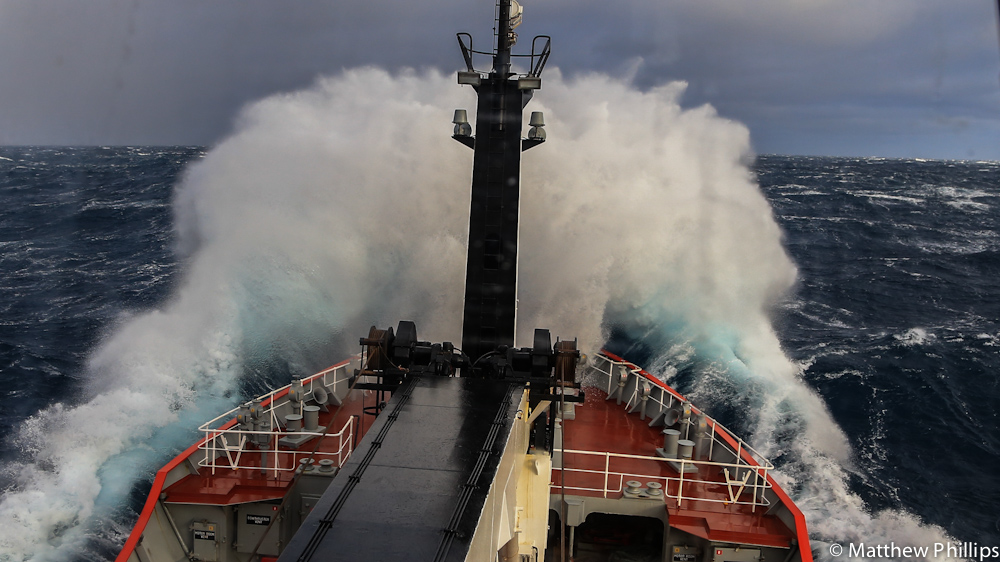 Whamm! Have some of that! What is normally a four-day return to Stanley in the Falkland Islands ended up being a six-day rollercoaster. I don’t get seasick but I don’t take well to things messing with my sleep. There are various methods to counteracting the pitching and rolling of the ship when you try to sleep, including wedging a lifejacket or the upright cushion of the cabin’s settee under your mattress so you are wedged against the wall. Another option is to put the mattress on the cabin floor. I tried the wedging method but it didn’t do much. 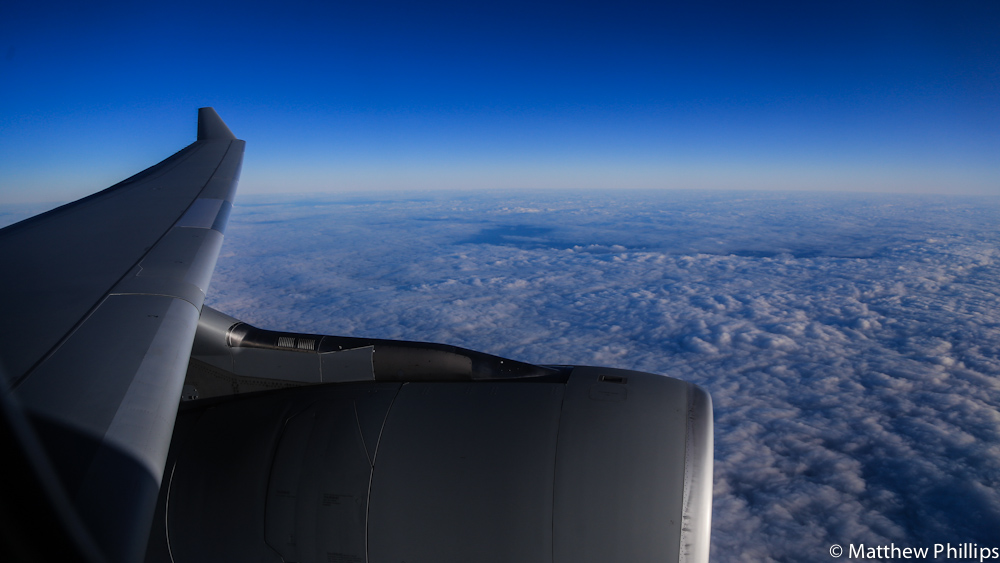 Take off was terrifying! The best speed I’d done in the previous 20 months was about 40mph in the jet boats. The flight was about 1/5th full so there was plenty of room. After take off I moved to a window seat and just stared out the window for an hour, enjoying the big blue sky from a lofty position. 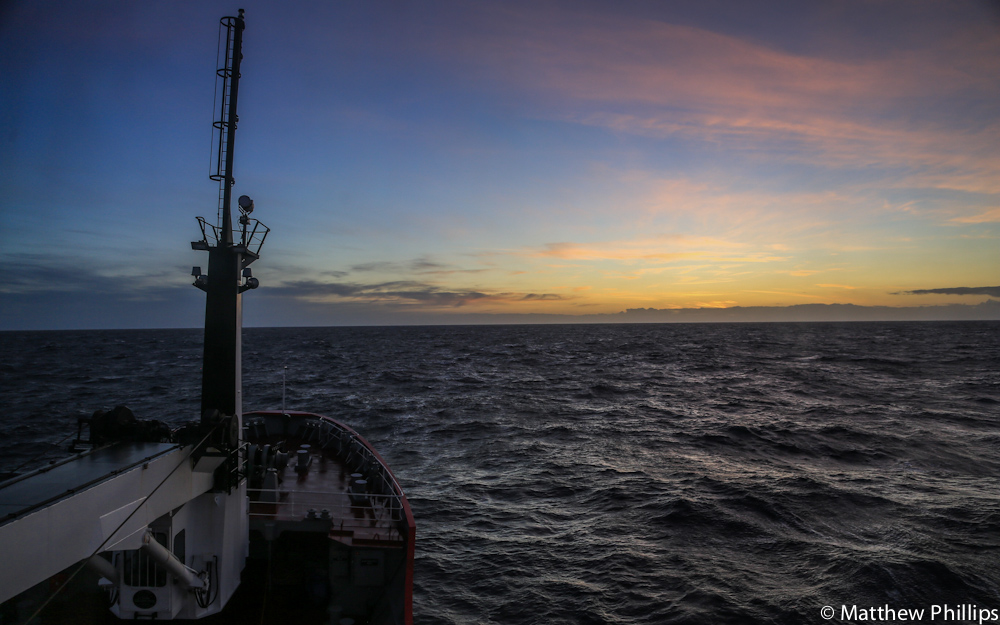 I spent most of my days on the bridge quite happily watching the sea, as it did its best to slow us down. The seas finally gave us some leeway as we approached the Falklands. You won’t be able to see it but there is land in this photo, the first land outside of South Georgia I’ve seen in 20 months. The skies cleared and gave me a rare sunset as if to acknowledge the moment.

I arrived back in the UK on the morning of the 15th and was picked up by Dickie and Rachel (who were both at KEP in the last year). They then very kindly spent the day taxing me about. [Editor comment: This is Rachel. As Matthew’s blog editor, I would like to add in that this was an absolute pleasure.] I dropped into BAS and saw my boss briefly and a few other people before having afternoon tea (I’ve never felt so British) with James and Deirdre who were about Cambridge and BAS. I then picked up a hire car on the 16th at Stansted Airport (just north of London) and then drove the 450 miles to Edinburgh, via Dunfermline to drop Deirdre off before staying the night at a friend’s house. Driving was something I was a little concerned about as I hadn’t driven on a proper road with traffic in my time south. I did stall after 20ft or so but it came back quickly enough after that. Only a couple of hours later I was criticising other drivers for being rubbish haha. 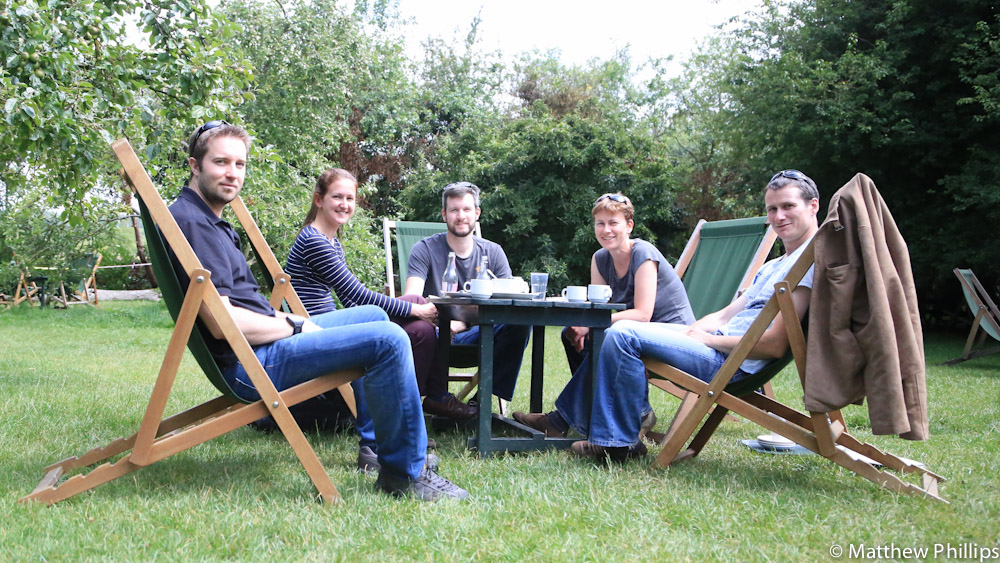 Look at all that greenery! That’s probably what struck me most when I got back. I’d left SG in the middle of winter and returned to the middle of summer in the UK. You might wonder why James is here and you might have picked up the bandage on his hand in last month’s blog post. He had an accident with a sander making his Midwinter present and had to return to the UK for some surgery. He was getting the same flight I was when it headed back south the same evening, so we found some time to get lunch together. It was sitting here that I became quite self conscious about how white I was! 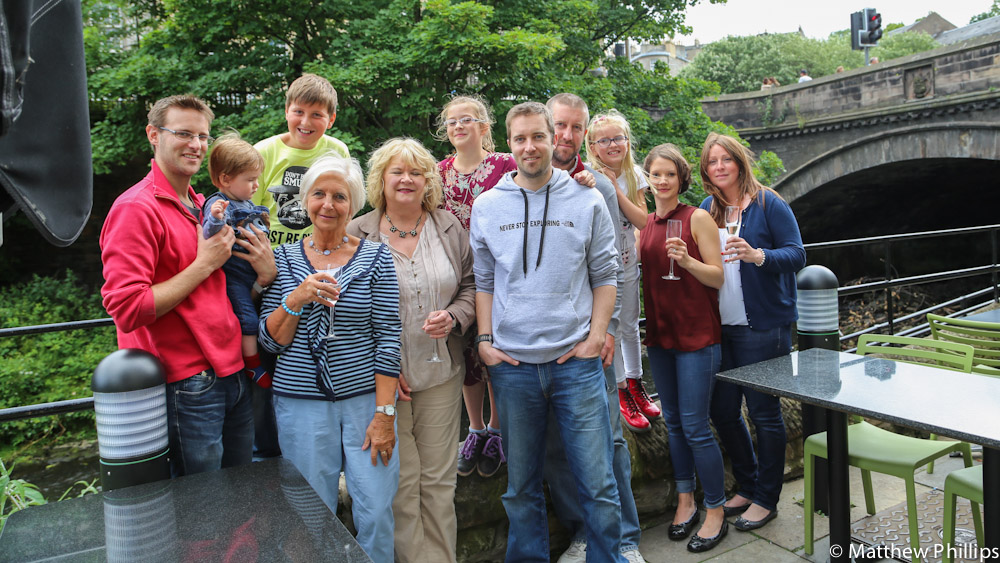 I managed to surprise my family, though I was very nearly caught 30 mins before the lunch by my mum who walked passed me on the street! The staff at Pizza Express were probably more excited than I was about the whole thing, and took me through the staff area so I could appear from a door right next to where everyone was sitting. They also gave us some free champagne… I should do the surprise return thing more often!

As well as surprising the family with my ‘early’ return I also had a few more surprises up my sleeve. The first one is that, if you are reading this on the day of publication (Monday the 20th), I will be in Iceland while making my way to Greenland for a month to work for Tangent Expeditions again, two years after my first trip up there. That will take my time in the polar regions to 22 months in the last 24. I’ll return to the UK late August and enjoy a few months off – I feel like I’ve earned them! During that time I’ll head to the west coast of Scotland and do some sea kayaking, which is the best way to spend time on the water, in my opinion. I may do a blog post or two in that time but I have to keep some things just for me.

I hinted at a return to South Georgia earlier in the post and I’m happy to say that I’ll be heading back to my frozen ivory tower in November for another eight to nine months. So this is only the end of the beginning.

I’ll have a Greenland blog post out towards the end of next month.