I’m typing this up with less than 36 hours left on the island. By the time I’ve published it I’ll probably be at sea making my way to the Falkland Islands.

June is a pivotal month in the Antarctic as it marks the end of the gathering darkness with the winter solstice. June 21 is the shortest day of the year and is celebrated throughout Antarctica. BAS bases traditionally take a weeks holiday around this time and KEP is no different. Though the fishing season normally kicks off around mid-June so our week is normally interrupted with trips out to take the Government Officers for inspections and fishing license issuing. 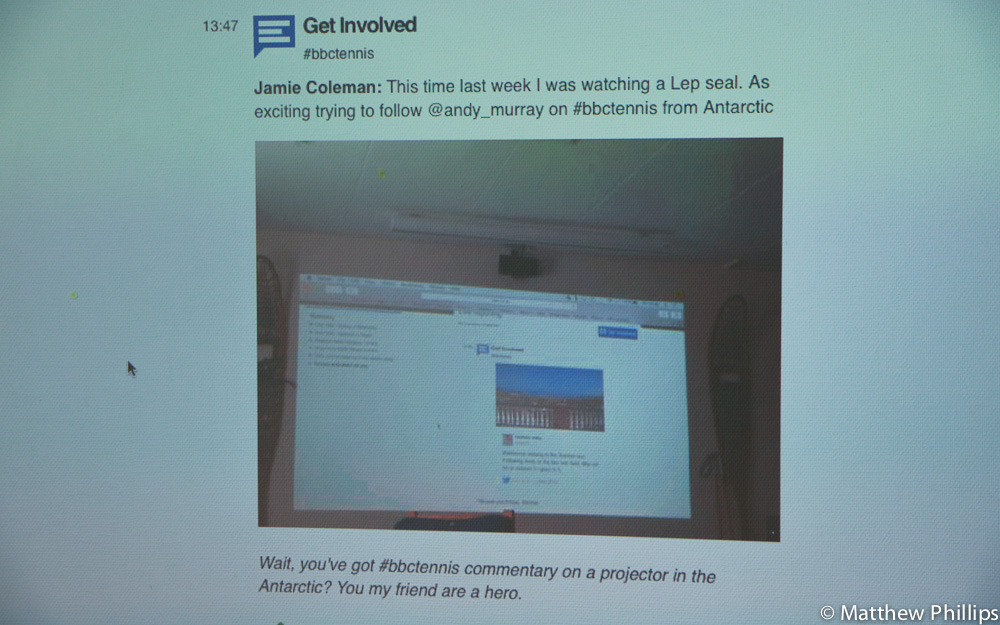 Jamie hit stardom early in the month by tweeting a picture of us following the French open tennis on the big screen in the bar. It made it onto the BBC live feed, I think the hero comment might have gone to his head. 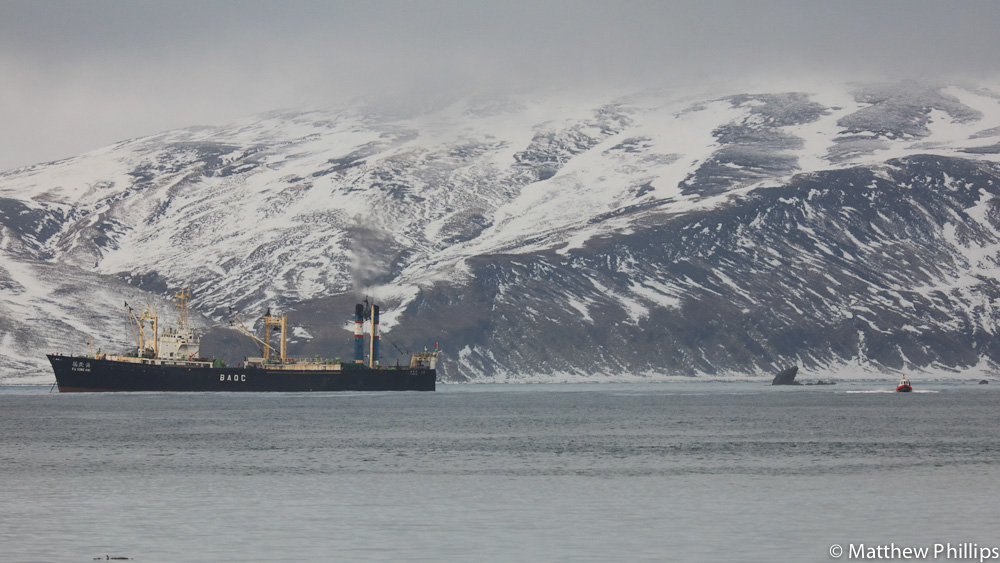 The busy fishing season (krill) starts shortly after the ships have been driven north with the advancing sea ice. The waters around south Georgia are particularly rich due to a massive upwelling of phytoplankton from the deep – krill thrives on this upwelling. The Scotia Arc (mountains under the sea) forces the water upwards as the water hits them. The water is pushed into this horseshoe of undersea mountains thanks to the Antarctic Circumpolar Current which is driven by the weather that circles the Antarctic in a clockwise direction. 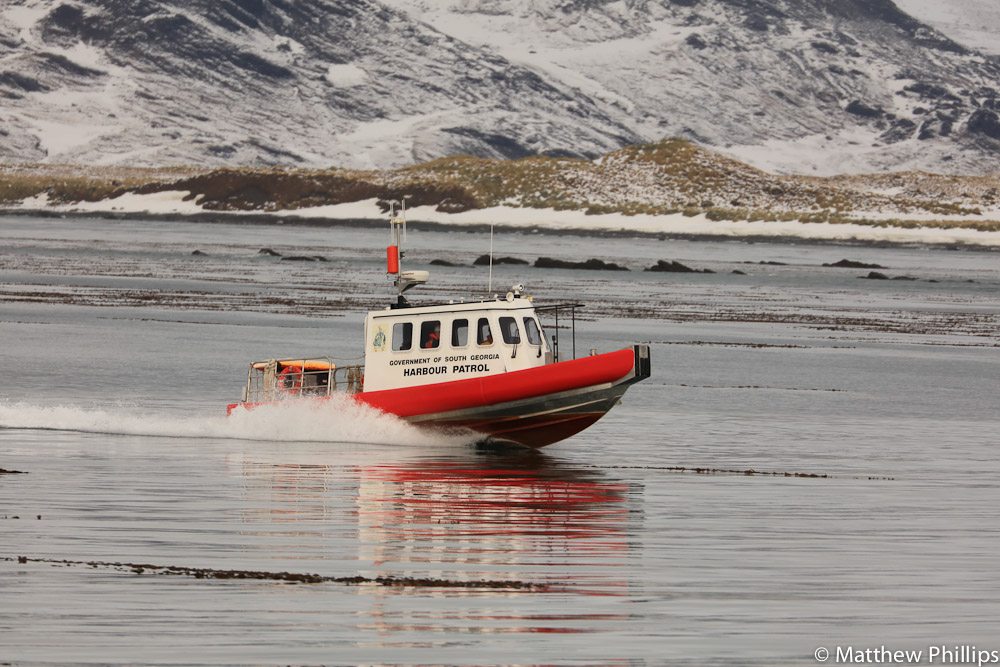 It’s this time of year when the jet boats really come into their own. Having jet units (as opposed to propellers) allows the boat to be ‘crabbed’ sideways, very handy if you are putting someone on a pilot ladder. The fact the boats have a cabin to stay warm in is a great thing as well.

Several months before Midwinter we all drew names out of hat, like a secret santa, to determine who we would be making a Midwinter present for. This can be a daunting prospect as the presents are often very impressive and the result of many hours of work. Coming up with the right idea can be the trickiest part. Some people are easier to make presents for than others, depending on their interests. I had an idea for my present early in the season and I was happy it would have worked for anyone I might draw. 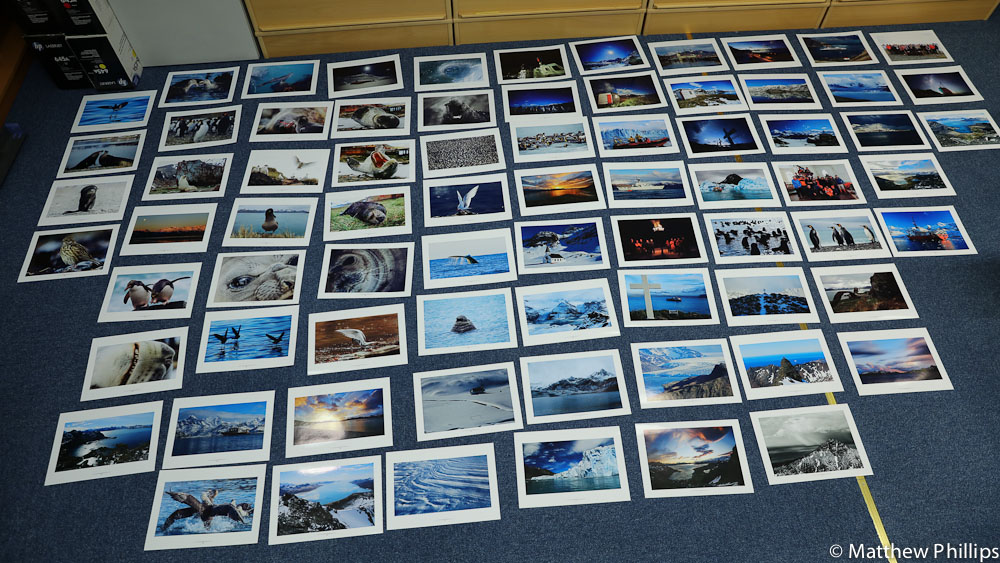 My idea was to make a photo book. I spent some time researching online how to do a DIY hardback book. From there I picked out my best landscape, wildlife and pictures that show life on base during my time on the island. I then printed them on A4 photo paper using our photo printer. I managed to get 74 printed before the ink ran out (I’ll have to get some sent in soon so they can still print!). As it’s single sided paper I then had to glue them, back to back and in order, using Copydex while being very careful to line them up properly. Once the Copydex had set I then used a scalpel to cut off the excess from the edges. As you might imagine, it took ages to do that! 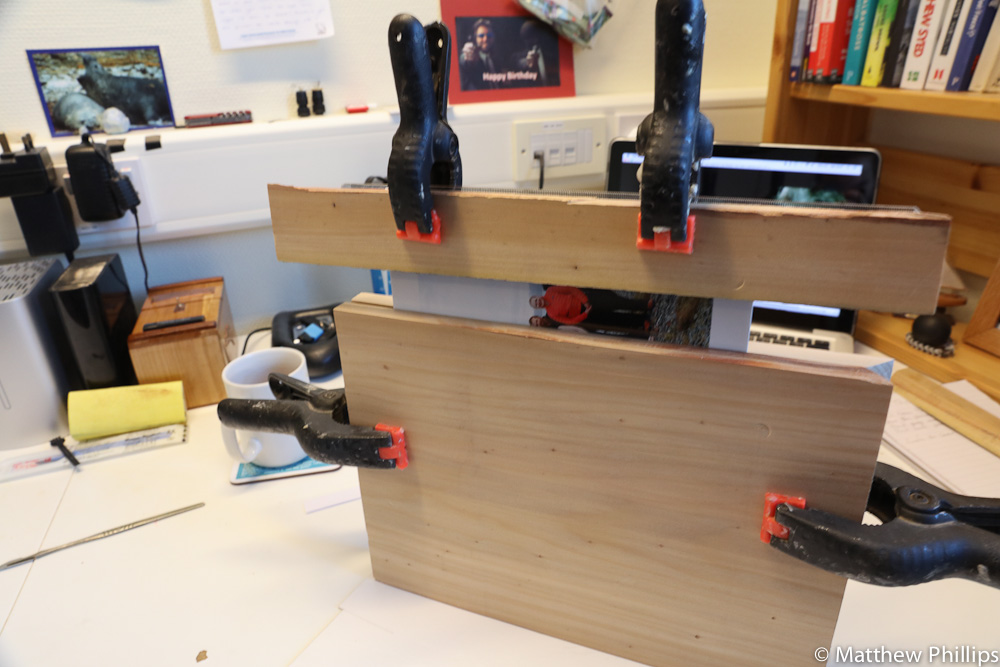 From there I bound them with more Copydex and small strips of photo paper in groups of eight pages. Again, I took great care to keep everything lined up. 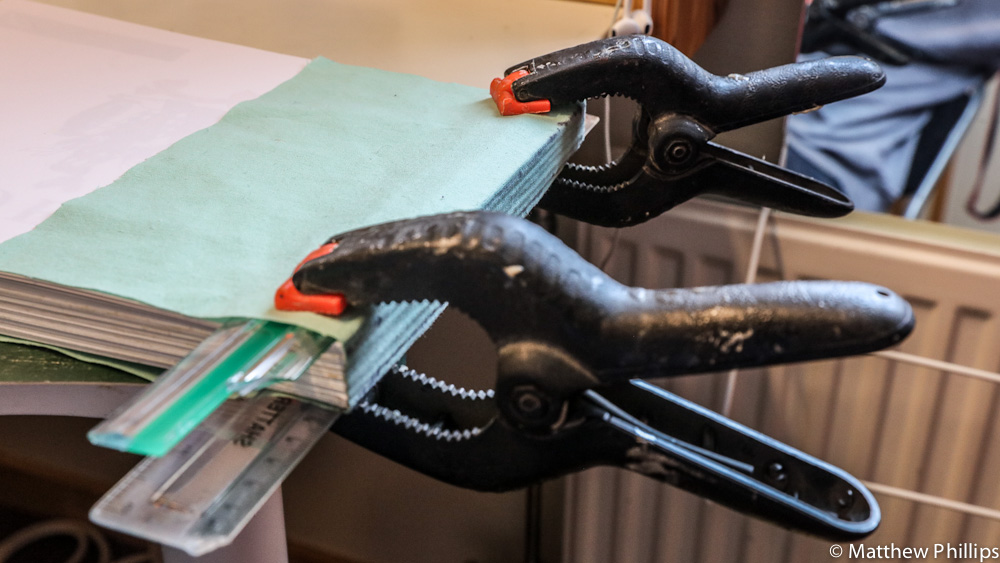 Having given time for the Copydex to set on the groups I then cut material to bind all the pages together. 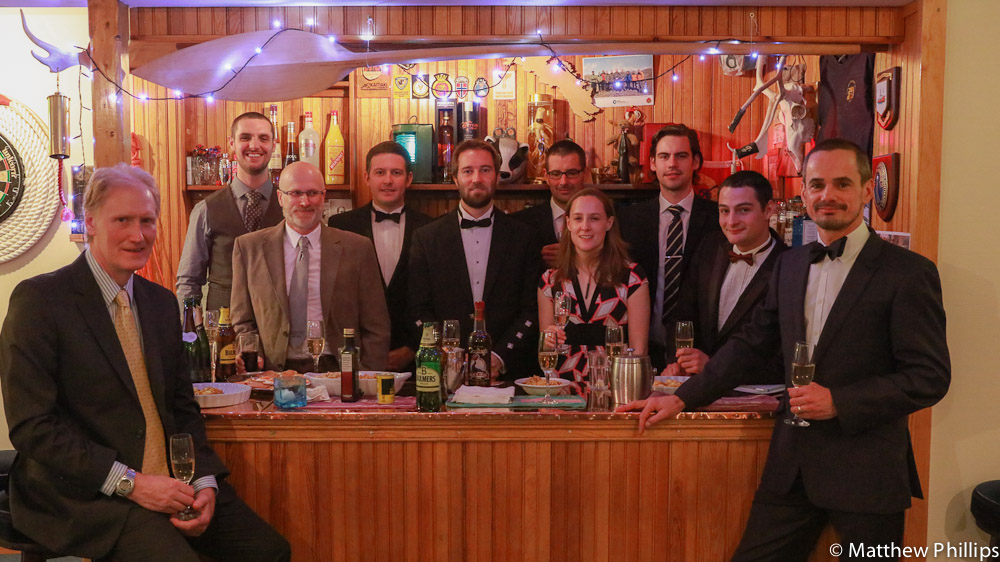 Midwinter’s day is the biggest date on the Antarctic calendar. As we don’t have a chef, people put themselves down to do a dish for the dinner which ends up being a real feast. The dinner is as close to a black tie event as we get. We meet in the bar before the first course for champagne. 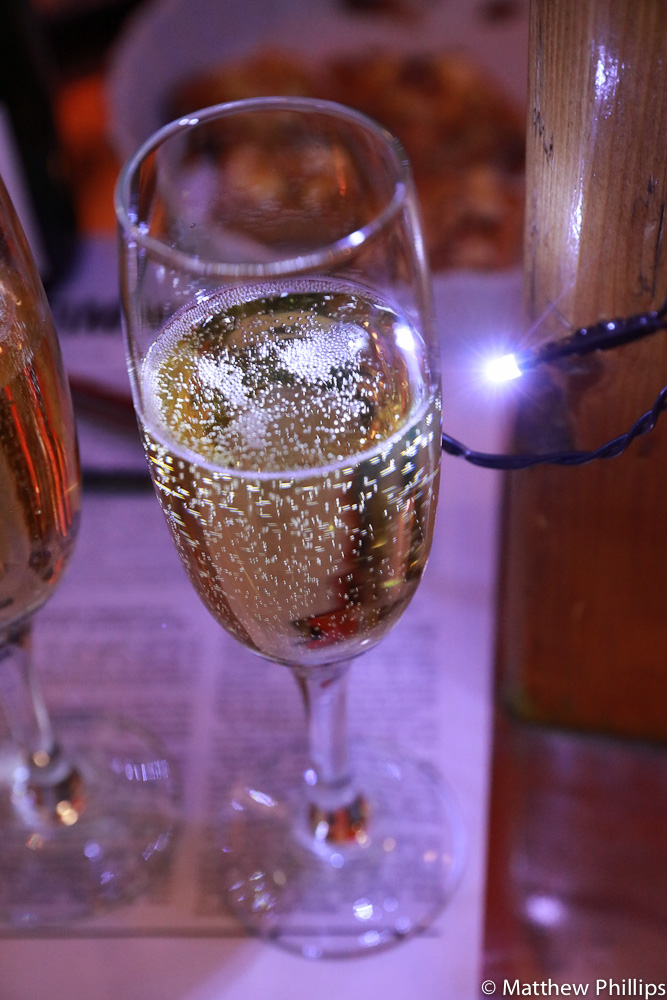 This particular champagne was a gift from the Seabourn Quest (you might remember Katie and I helped to run the post office on board early in the year) that we kept – thanks to my rich tourist friends! 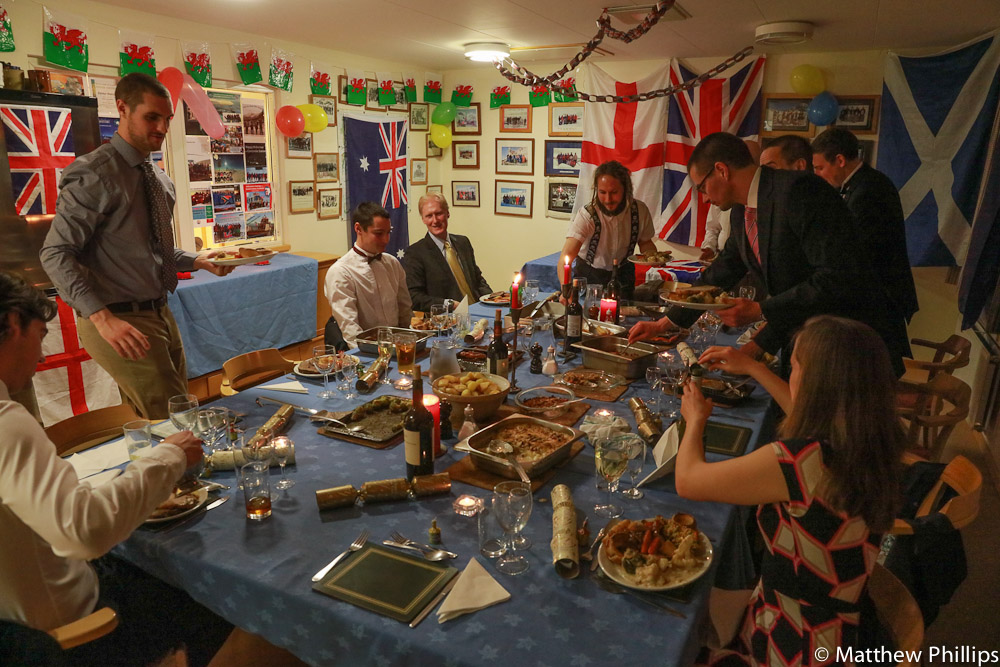 The dining room is decorated and the table is set early in the day, usually by the people who don’t have a dish to prepare. We still have lots of the South Georgia venison so that was used for a roast as the main meal. 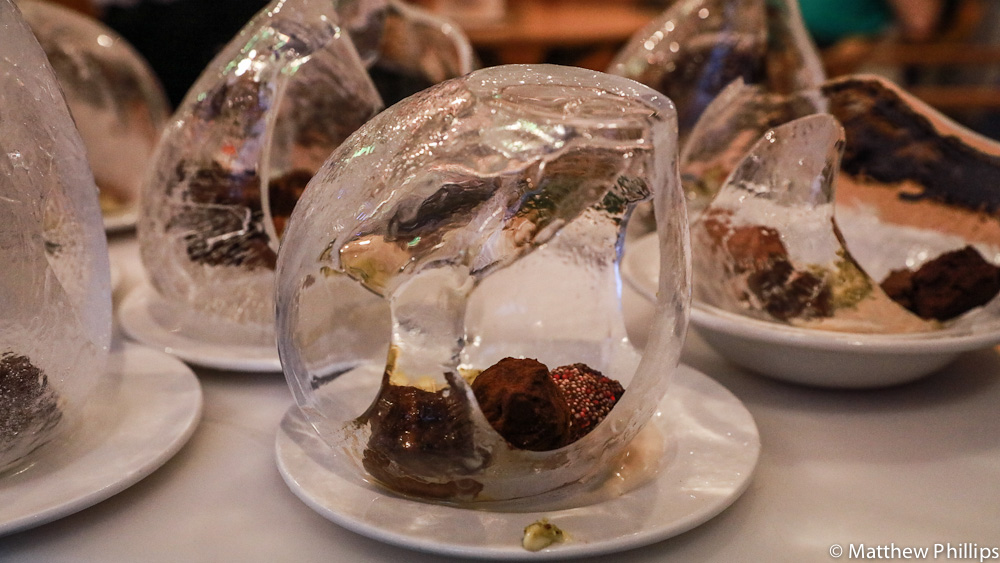 Roger and Becky came up with a very elaborate desert. It’s truffles set inside a frozen shell. The frozen shell was particularly impressive and created using a balloon filled with water and then stuck in the freezer. I’m not exactly sure how they made it hollow though. 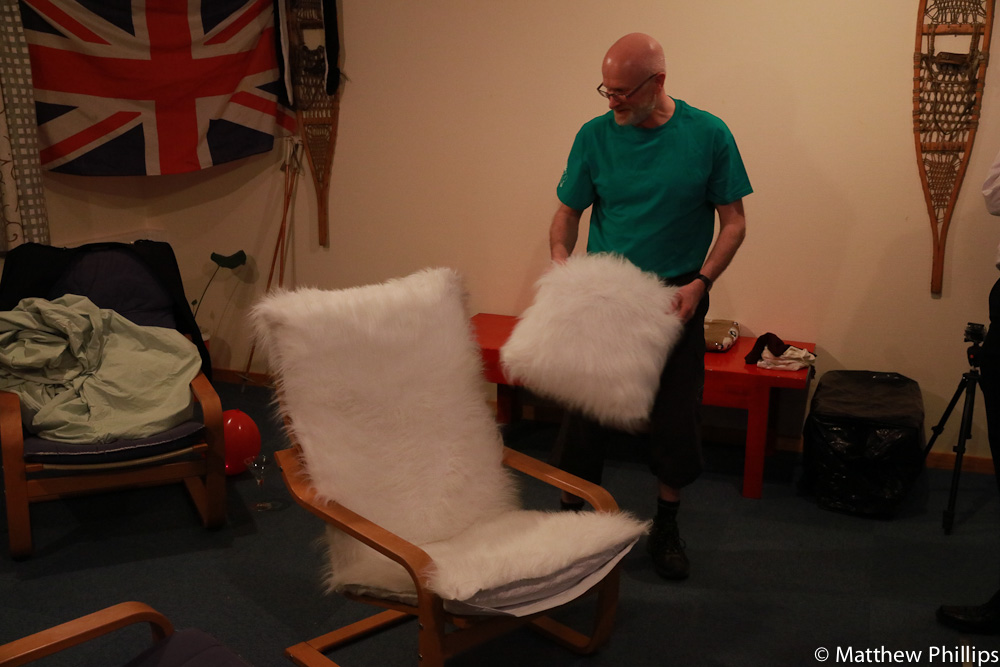 After the dinner it’s back into the bar and time for presents and the Midwinter broadcast. The BBC world service do a 30 minute broadcast each year for the BAS Antarctic bases. Here’s the link to this year’s – http://www.bbc.co.uk/programmes/articles/48Gx2jfJBWHyWggDSD19gFT/antarctic-midwinter-broadcast .  Erny has a pillow he’s quite fond of – if you’ve spent time here you know the one! If not, it’s similar material to the chair cover in the picture – this was one of Rogers presents to Erny. 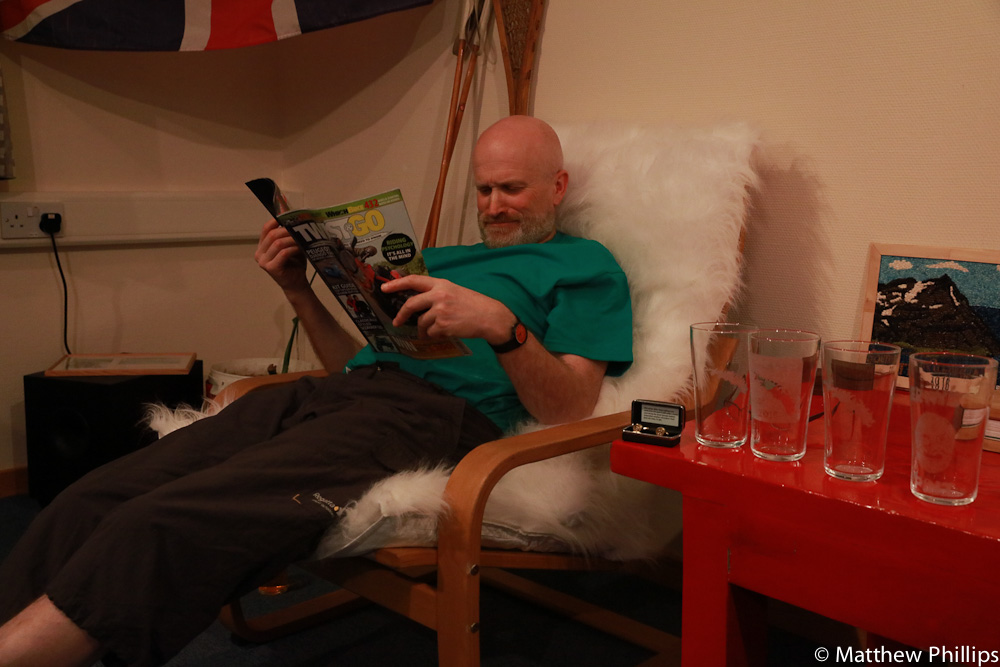 Erny also received a small package from his brothers which had a couple of ‘Twist and Go’ (moped magazine if you’re wondering) magazines in. He was very pleased with his haul of presents, as you can tell from the photo. 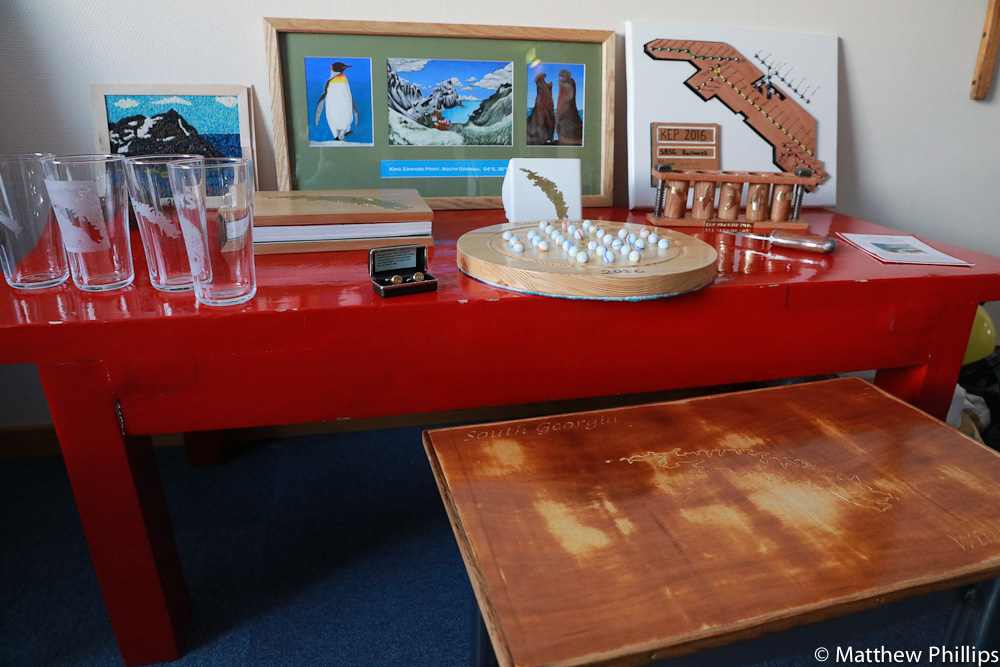 Here are the rest of the presents (going clockwise from the left and spiralling in as we go round). The second part of Erny’s present was etched pint glasses. Behind is a picture of King Edward Point (made from lentils no less!) that Becky made for Roger. The 3 painting picture was from Jerry to Lewis. The London Underground style South Georgia with stops made up of major bays and mountains was from Russ to Simon. In front of that was Lewis’s set of shot cups with brass inlays of South Georgia, seal, penguin and Bird Island. Just below that is Jamie’s present to me, a Skean Duh (the knife that gets tucked in the sock of a man wearing a kilt)… I did have one previously but it didn’t survive a battle with the dartboard last year… Best I don’t say much more about that. Simon’s present to Jamie was a Solitaire board. Simon made everyone a pair of reindeer eradication bullet cufflinks (that’s the second set I have now – just so long as everyone knows I had the first set!) Behind that is the book and centre is Robbie’s present to Russ, a South Georgia toilet roll holder. The coffee table in front of the red table was Erny’s present to Robbie. I didn’t get a good photo but it has the SG outline in the top and the frame has small penguins cut into it. 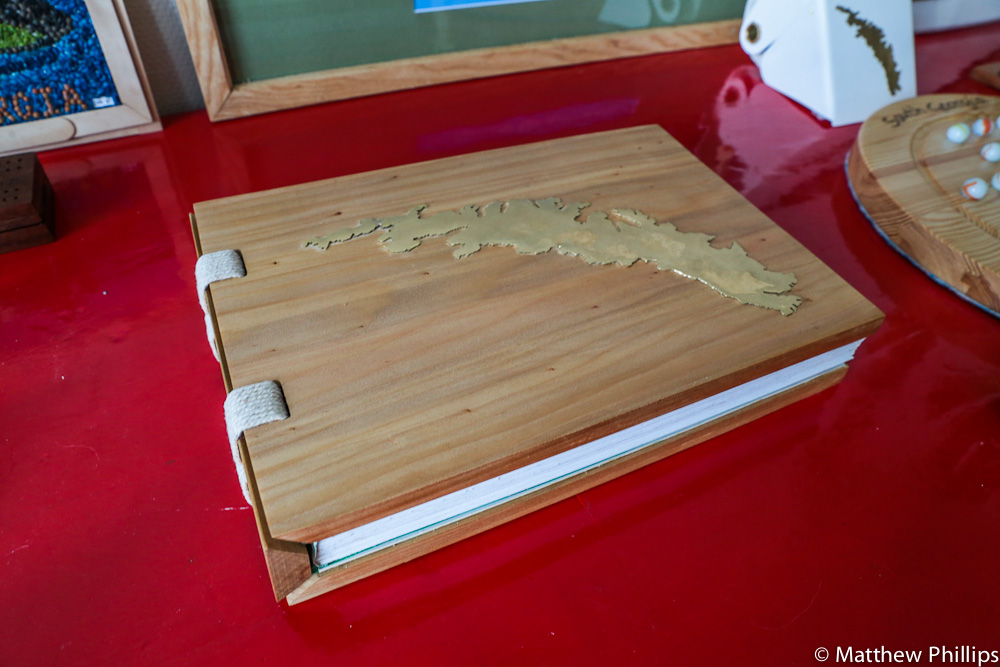 Here’s a closer look at the finished article. It took me the best part of a day to cut out the South Georgia coastline from brass plate using a jigsaw. My only worry is the binding of the pages holds! 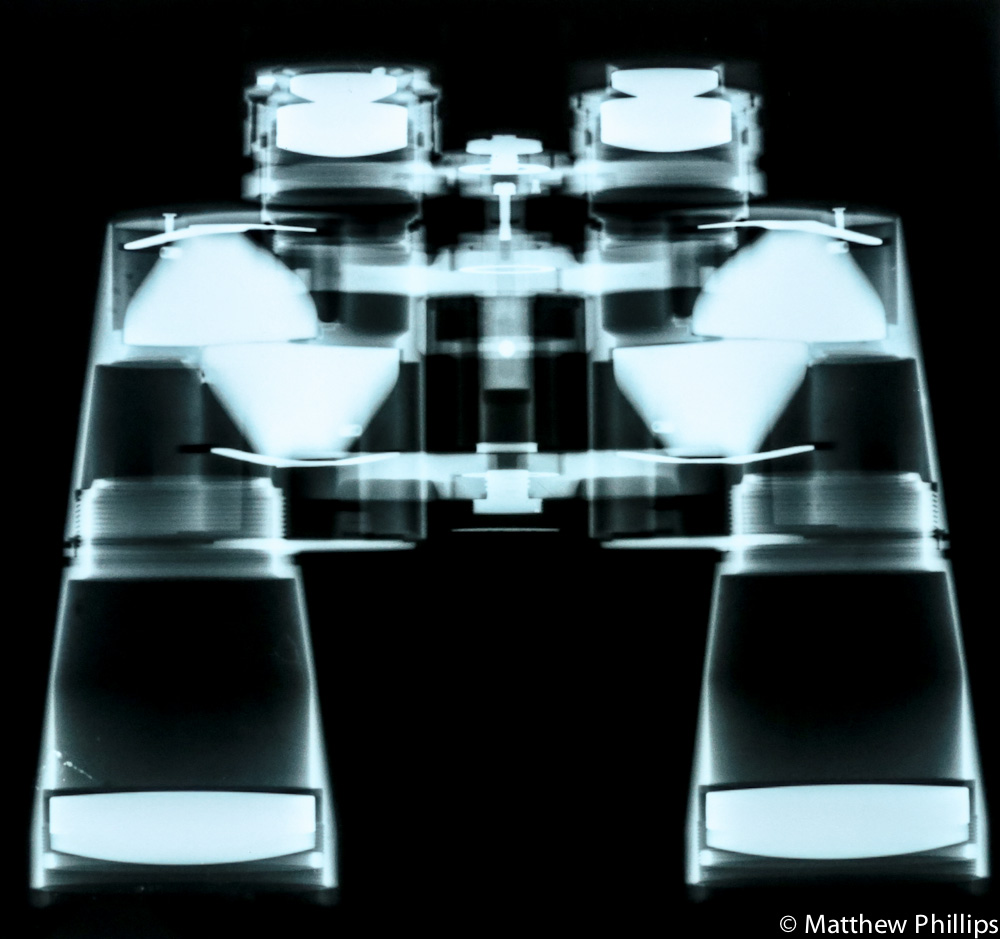 We have an old veterinary X-ray machine on base. Part of the ‘Doc School’ training with the advanced first aiders is to help develop them in the dark room – I did say it was old! Apparently we are getting a new digital one next year. Anyway, due to the radiation it’s not advisable to X-ray body parts unnecessarily. So things made of metal are good to practice on, partly because the results can be quite cool! This was one of the first X-rays I took. It’s the binoculars that normally sit on my windowsill. The white/clear parts are the glass elements.

I guessed my cameras and lenses would look good, given all the metal and glass elements. The scale is slightly off here, it took me a few seconds to work out why… the lenses are extended in the x-ray.

This was my favourite though, the lenses came out quite nicely. The small lense is my 14mm wide angle – the shape of the front element gives an idea of its field of view. The bigger lense is my 100-400mm which a whopping 21 glass elements! (You can’t see that in the x-ray but you can still pick out a handful).

Ok folks, I have to run. I don’t know whether I’ll be down here again later this year or not. It’s a strange situation to be in to be honest. I’ve packed a big box of my stuff that will go out on the ship in April as it heads to the UK and should be able to pick it up in a year’s time. Or I might be unpacking it later in the year. If not I’ll have to find somewhere else to swan around…