The Shack departed South Georgia on the 9th of March and signalled a slow but steady transition into winter. At the peak of the summer season there were 34 people on base – BAS, Government officers, builders, reindeer team and museum staff. The reindeer team were first to depart on the Pharos, next it was the Museum staff on various ships that could accommodate them, heading for the Falklands. Then a few weeks after the Shack departed, the builders left. This left, between BAS and the Government, only 11 people on base for the start of  the winter.

Another long one this time, but that’s everything up to date now. Next post should be a more reasonable size. 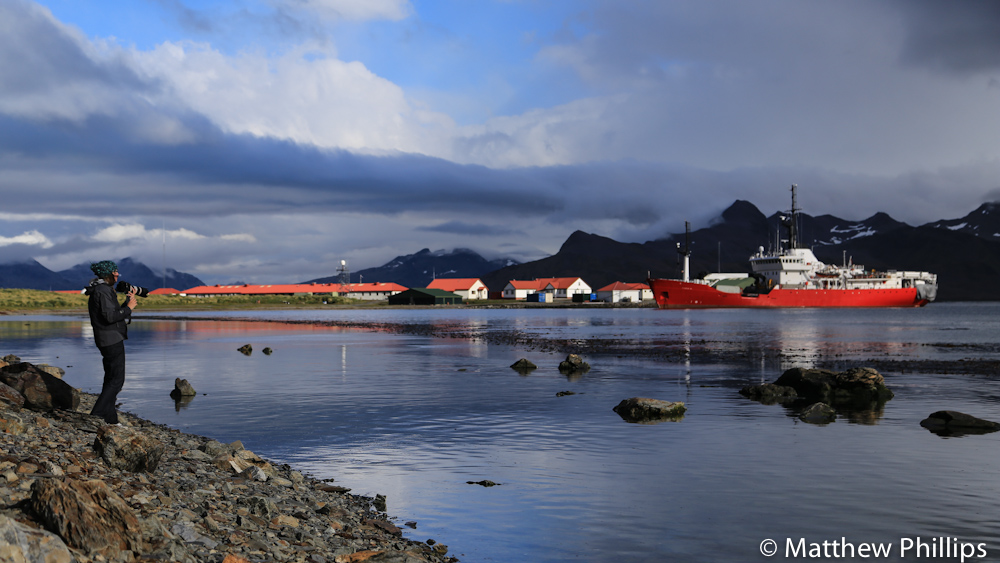 Sam (Doctor for the reindeer team) waiting for fur seals to approach. 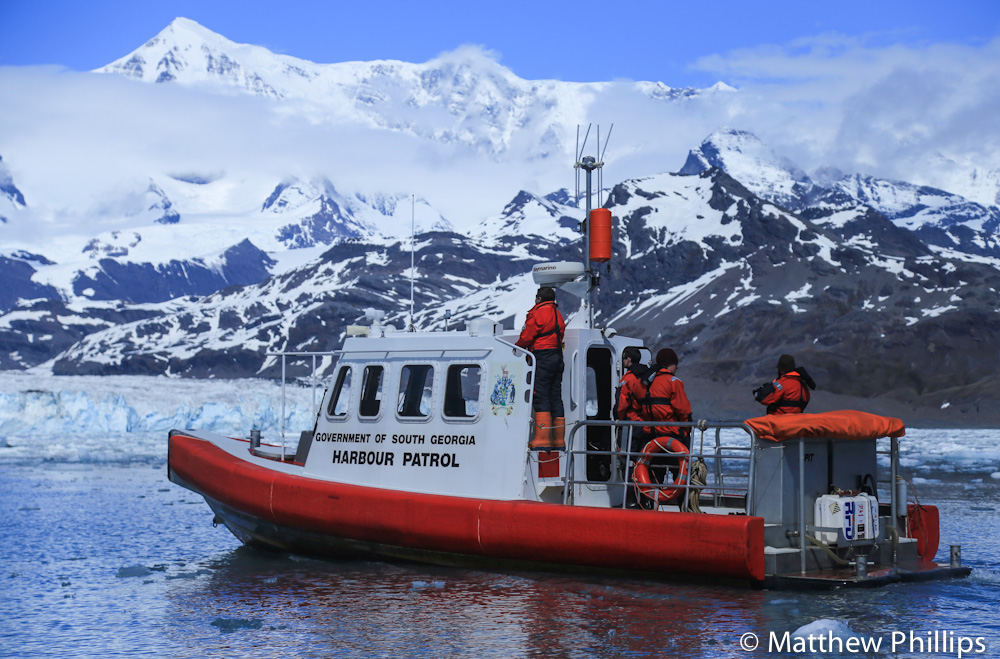 Jet boat Pipit approaching the Nordenskjold Glacier. Each jet boat has two 350hp Yanmar diesel engines with a Hamilton jet drive unit for each engine. On a good day they will do 32 knots (about 37mph) flat out – not possible in ice. 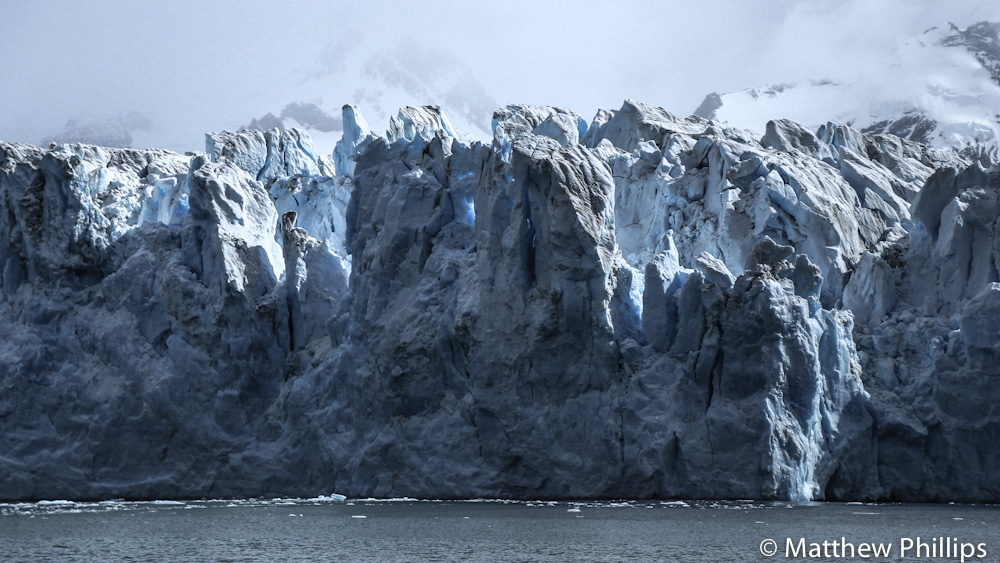 The Nordenskjold Glacier. From the hut at Sorling you can hear the ice as it calves* off. It’s an impressive sight, a powerful one too. It’s wise to keep the boats a safe distance away. The front towers about 100ft above the water, rule of thumb is to keep the boats twice as far away as it is high. *A glacier will carve a fjord but the process of ice breaking off a glacier is called calving.

One of the last cruise ships of the year. The Akademik Vavilov about to lift her anchor after spending the afternoon in the bay. Sophie, a friend from my days in Hong Kong was working on board as a sea kayak instructor (small world!). We were having a BBQ that night and managed to get her over for a reindeer burger before the Vavilov departed.

Dickie trying to get a clear shot over to the Nordenskjold Glacier. Dickie and I went on holiday to the Greene Peninsula in mid April. In typical South Georgia style it looks quite tame on the map, smaller peaks and fewer options compared to the Barff Peninsula (across the water), it wasn’t long before we saw otherwise. 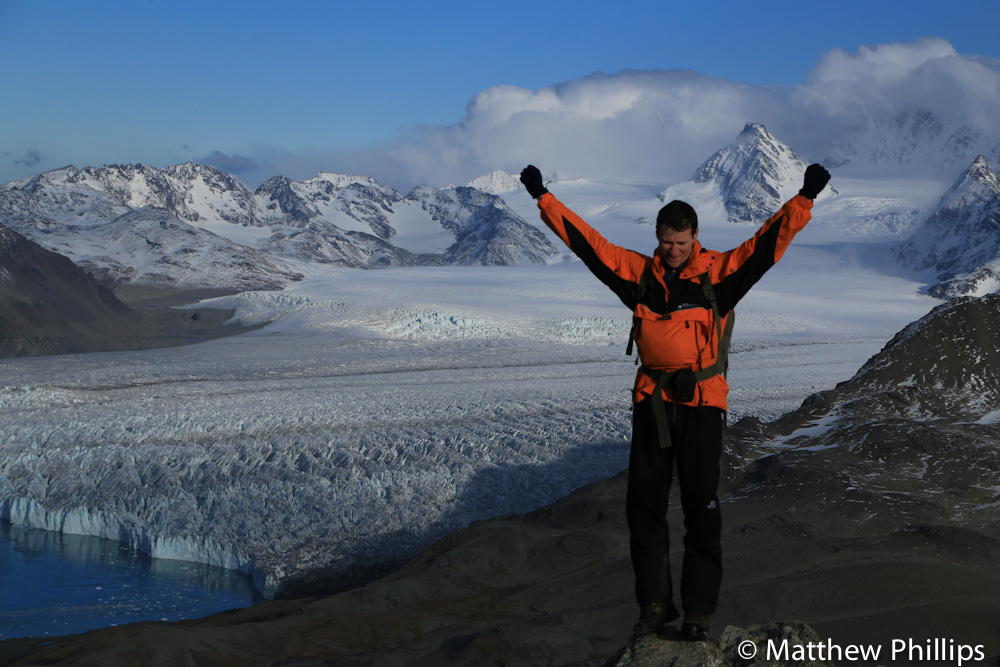 Dickie celebrating on top of a tiny summit! Nordenskjold Glacier in the background again 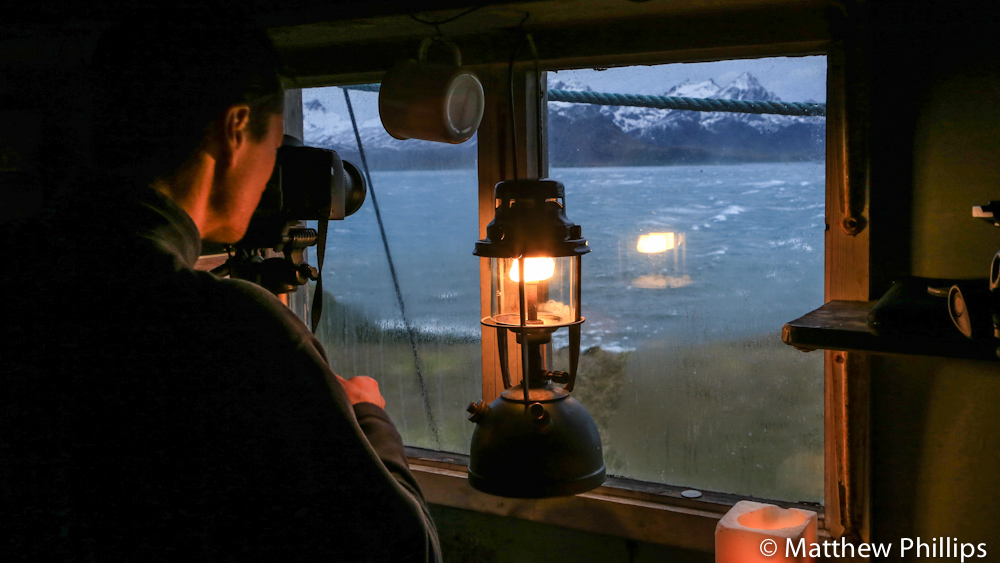 One day was spent in the hut hiding from the weather. Base recorded winds of 60+mph. Luckily we had books, good coffee and some music to help pass the time. Dickie getting a shot from inside the hut, the way forward on stormy days. 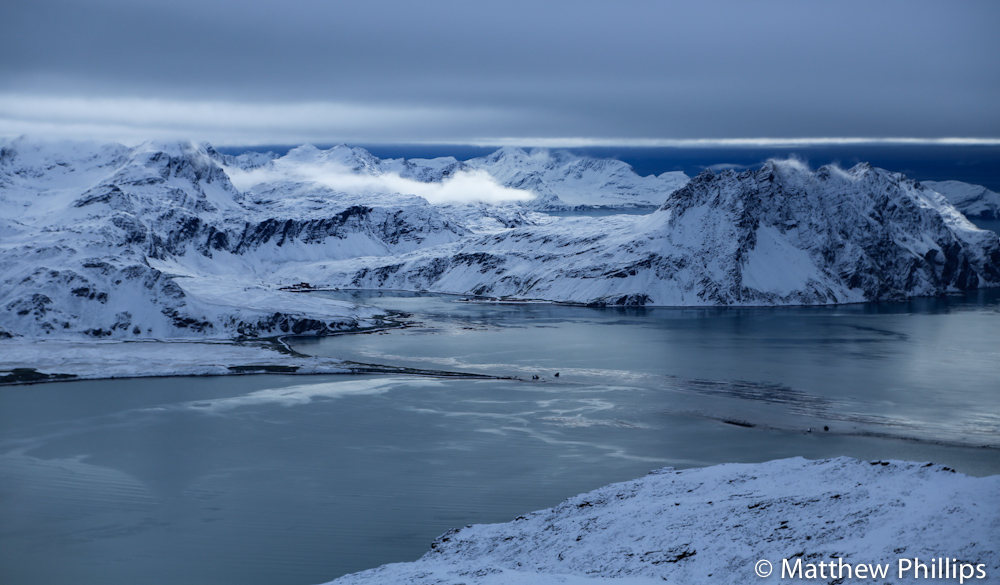 The next day we woke to several inches of snow. That didn’t stop us getting out and taking in another peak – actually we left with the intention of doing two. We had managed to get a look a couple of days before and the first peak looked like it was easy going, and then a short descent off before a steep up hill to the second peak. KEP right in the centre of the shot and the wrecks of two fishing ships flanking either side of the entrance to Moraine Fjord. 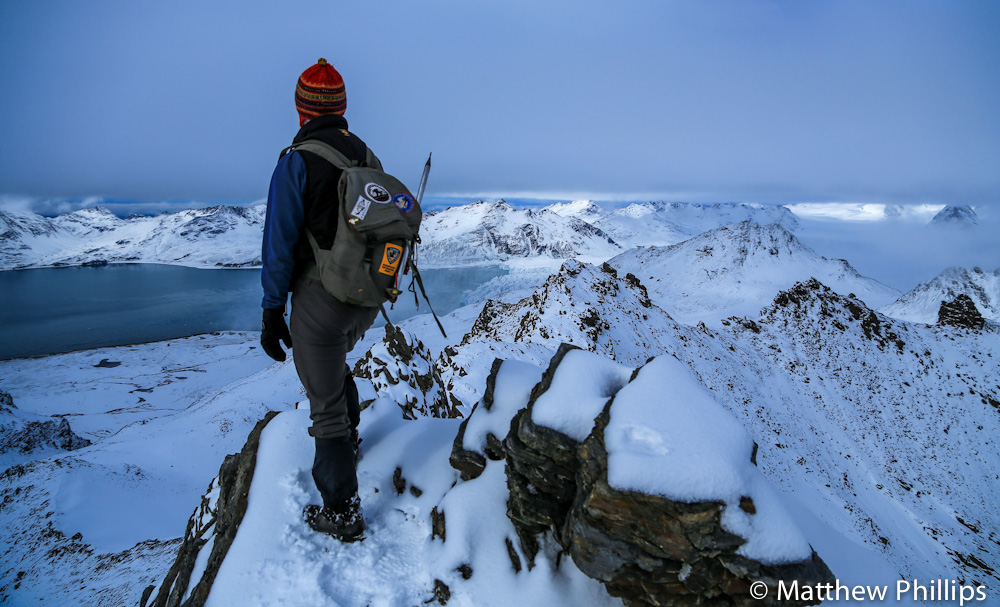 It was easy going until the nice wide ridge turned into this. It made for some great scrambling but not so good for our double peak ambitions. 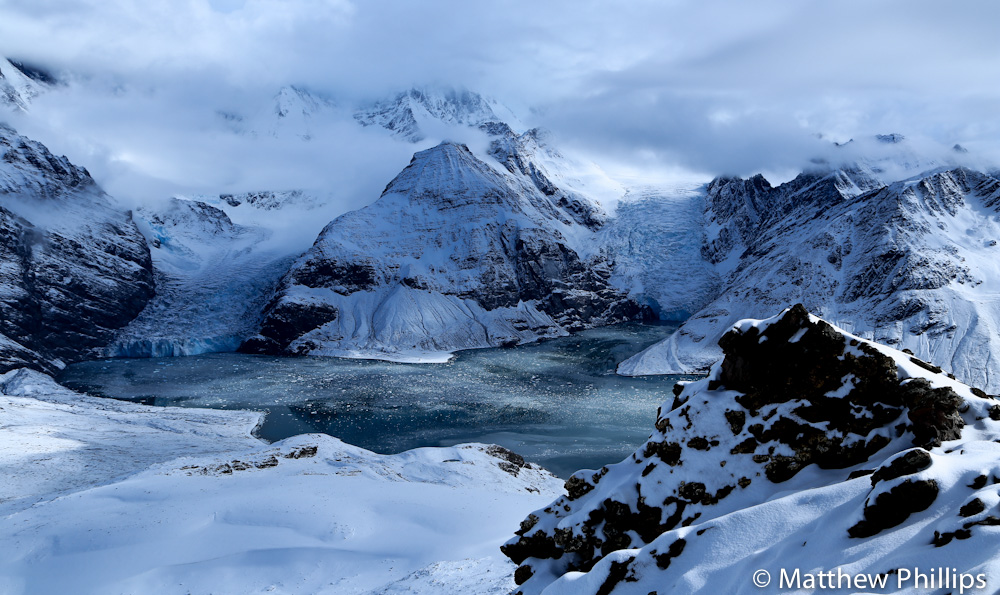 Looking back at the head of Moraine Fjord to the Harker and Hamberg Glaciers (left and right respectively). 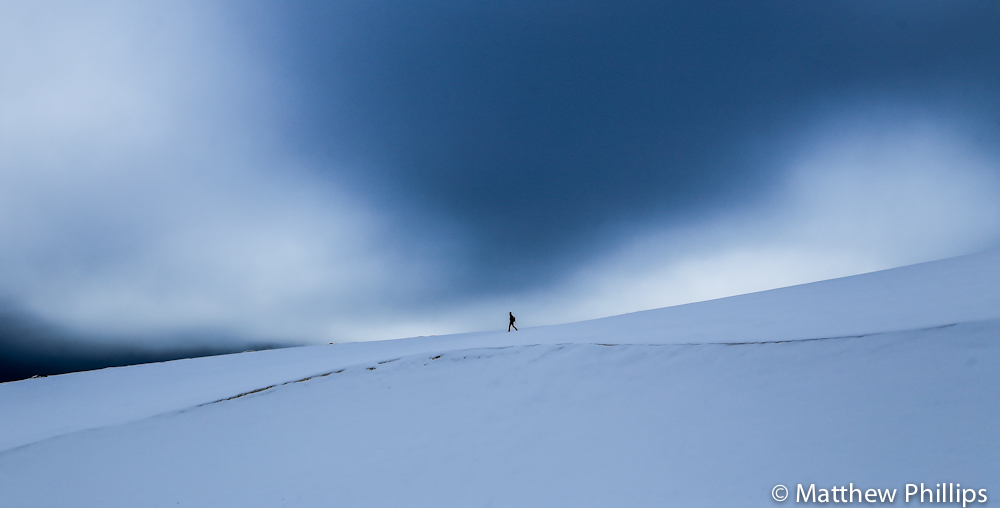 Dickie crossing a snow field as the weather closes in. 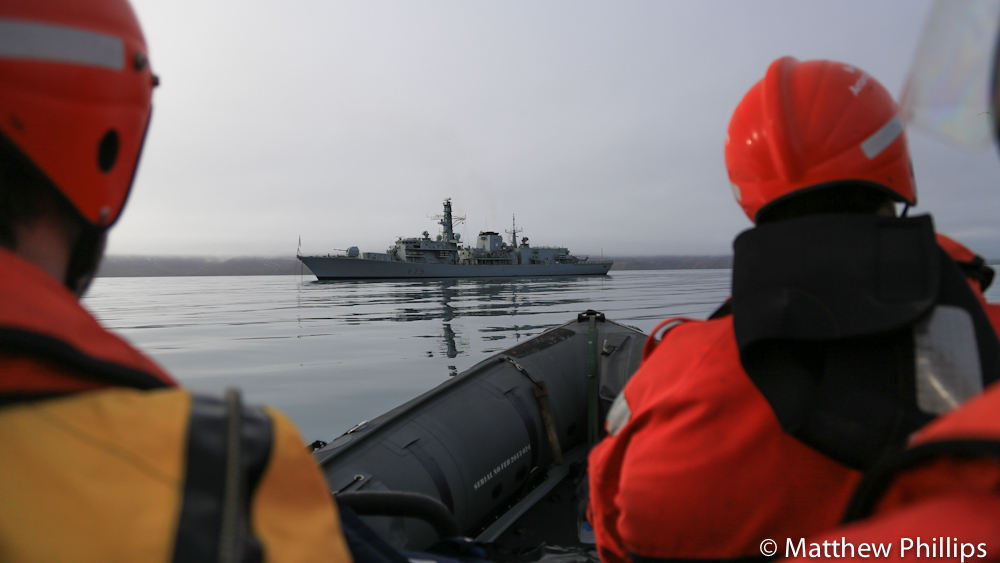 A late visitor was the HMS Portland, she was on tour from South Africa and stopped by on her way to the Falklands. They were kind enough to have us on board for lunch and a tour. 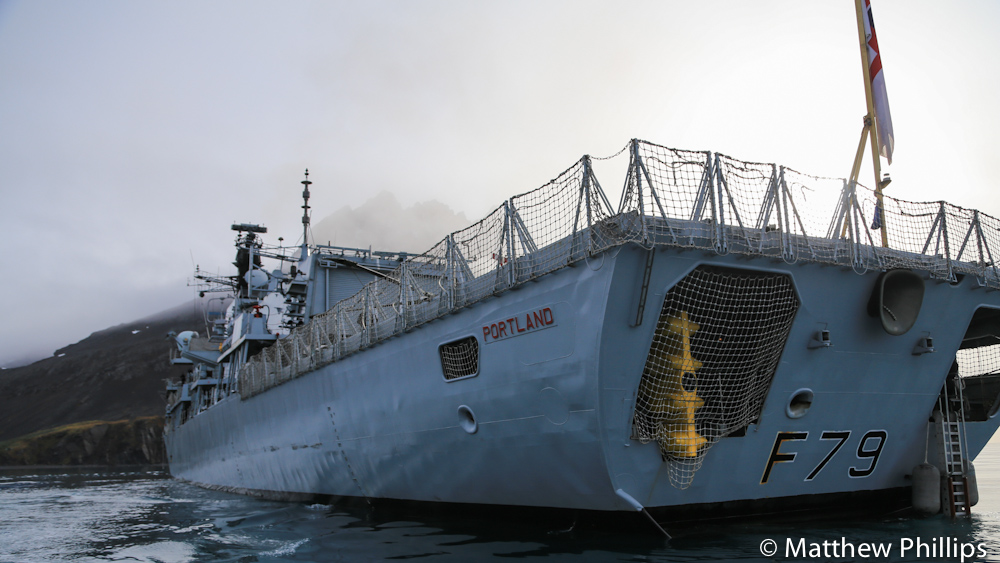 Aproaching the stern you can see the towed-sonar array (yellow device behind the cargo net) it’s towed behind the ship to give a cleaner signal – apparently when in the Irish sea they can hear ships coming out of New York! 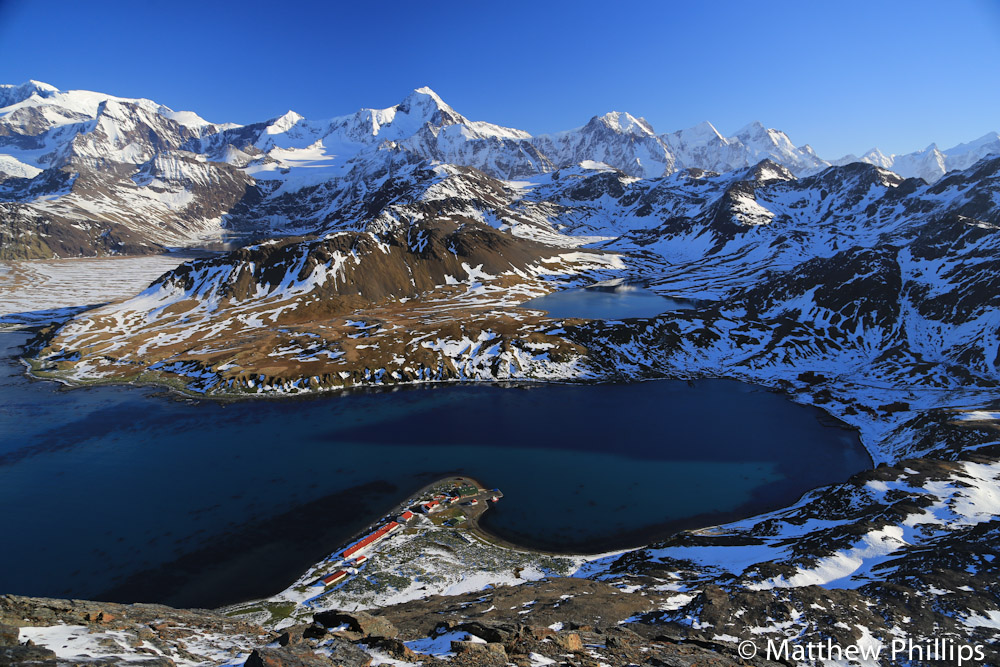 The view from Mt Duce down into King Edward Cove. The base still getting daily sun at this point. With the sun dropping lower each day the base stopped getting the sun in early May. The sun probably won’t hit the base again until mid August. 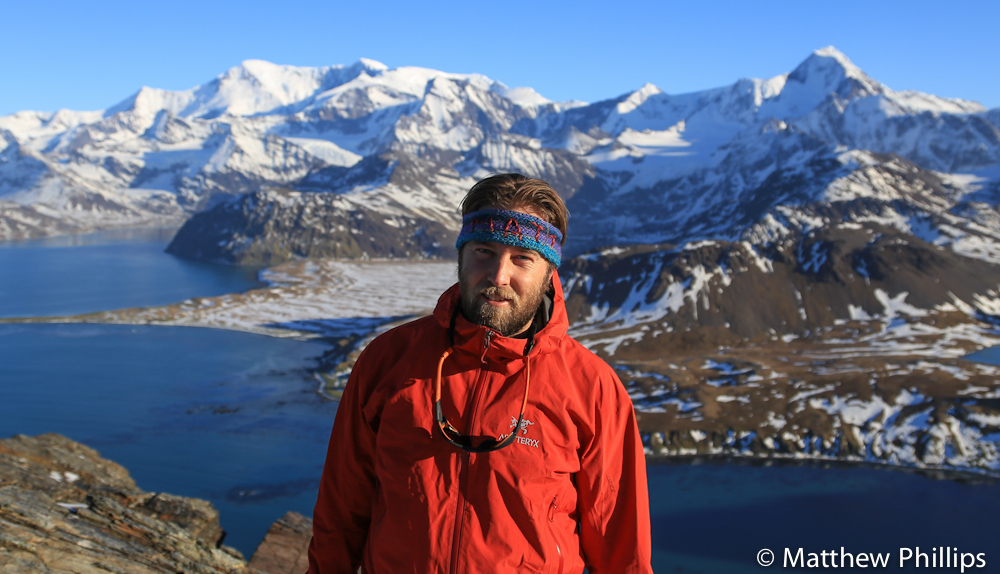 Me sporting some headwear a friend made for me. Thanks Hannah, it keeps the ears outrageously warm – I’ve not been able to wear it without having to take it off every 5 minutes because of my ears getting too warm! The beard is great for keeping my face warm too, and will stay until summer (maybe a little longer) I don’t plan on cutting my hair either, although it’s becoming annoying, so no promises. 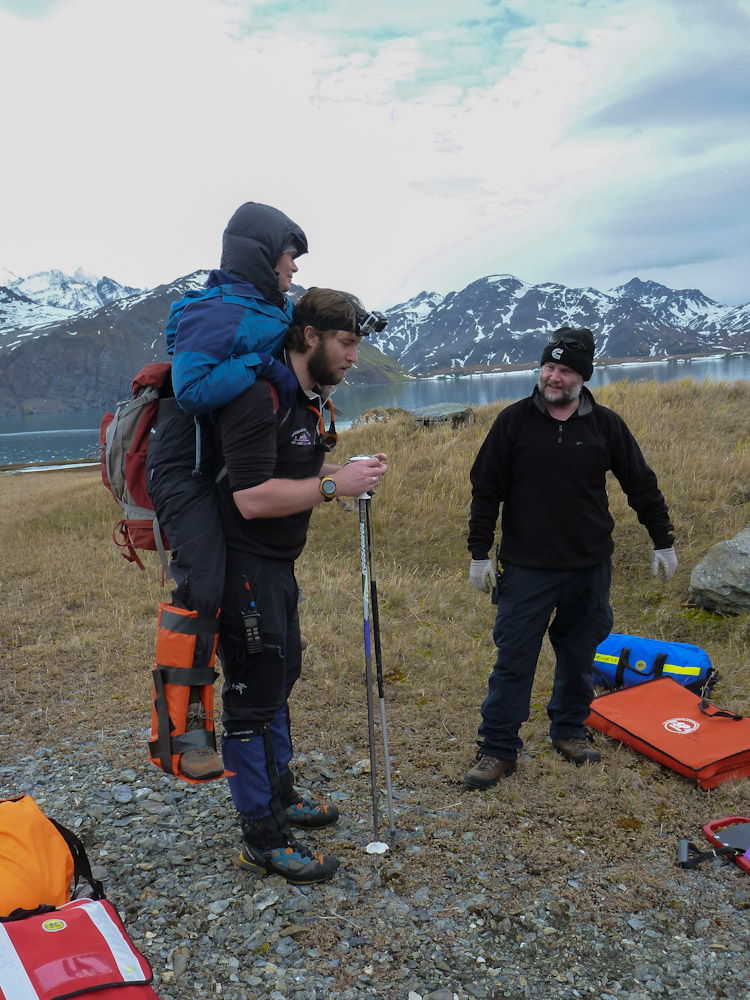 With things being quieter on base Dickie ran a Search and Rescue (SAR) exercise. Scenario – Simon and Sarah were on holiday on the Greene Peninsula when Sarah fell and hurt her ankle(!). I am one of Julie’s advanced first aiders on base, Daniel being the other. So everyone was mobilised on base to get over there and get her out safely. With a suspected broken ankle Sarah was hoisted on my back using the rucksack as a harness (must have felt like a nappy to her!). There’s a bit of Mad Max: beyond the thunderdome going on here! (Photo courtesy of Simon Browning) 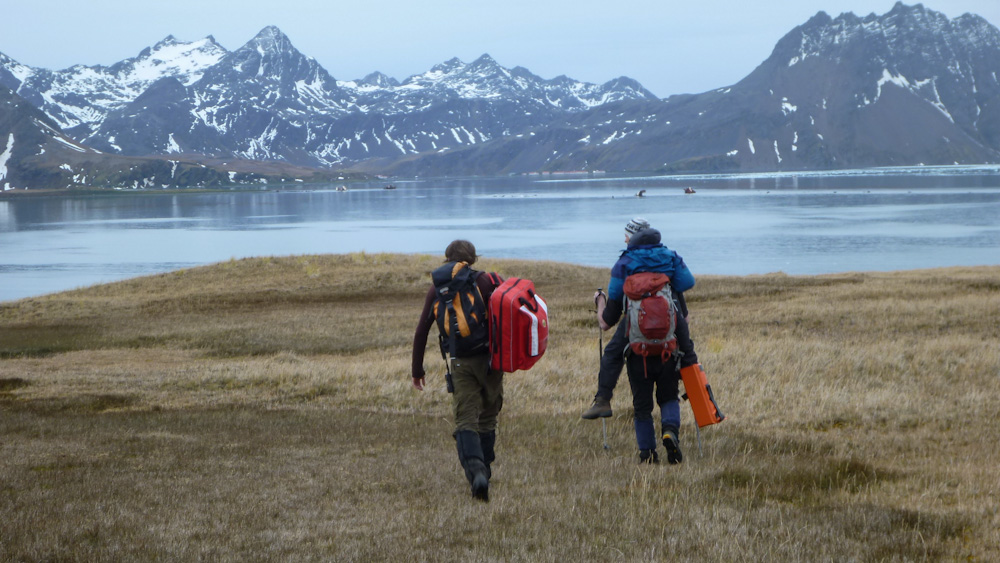 Carrying the patient back to the boat pick up. (Photo courtesy of Simon Browning) 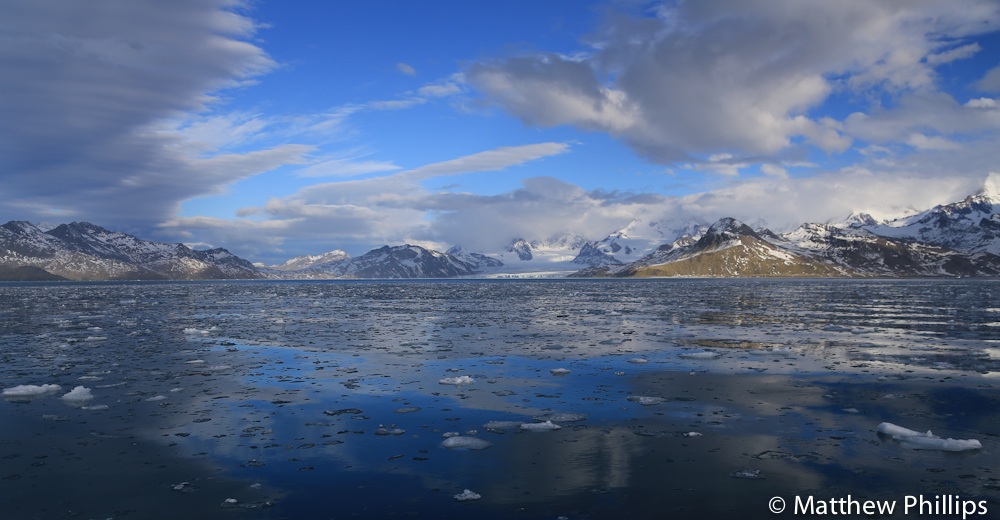 Returning to Cumberland Bay East, after dropping Julie and Tim at St Andrews for a holiday, to find it full of brash ice – brash is defined by being being less than 2m across. It makes great ice for gin and tonics. 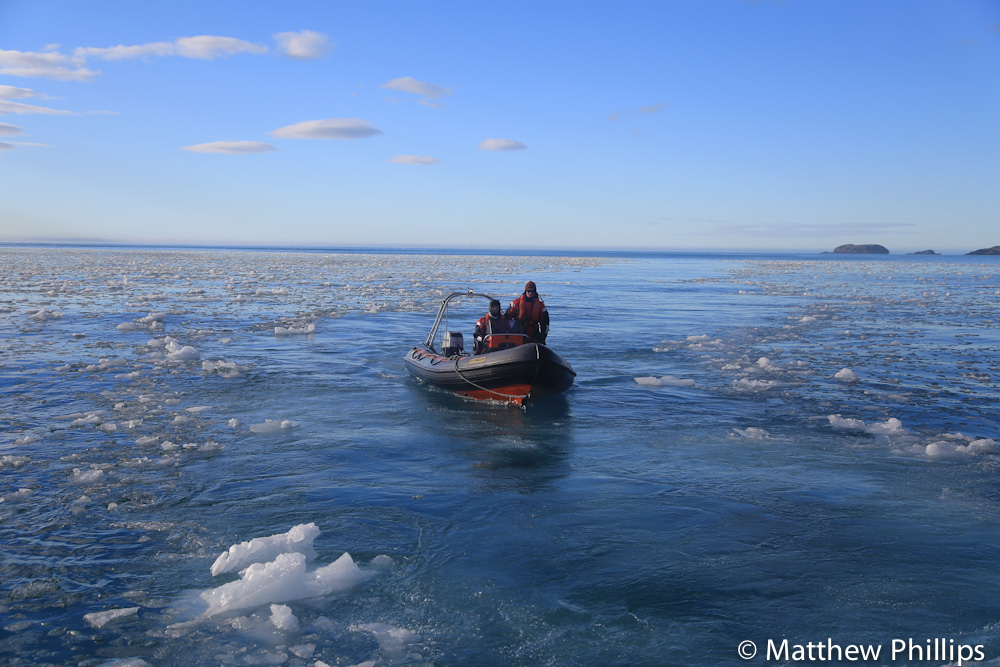 Alert following in the path Pipit has left behind. The RIB’s gel coat hulls are slightly more susceptible to damage than the aluminium-hulled jet boats. 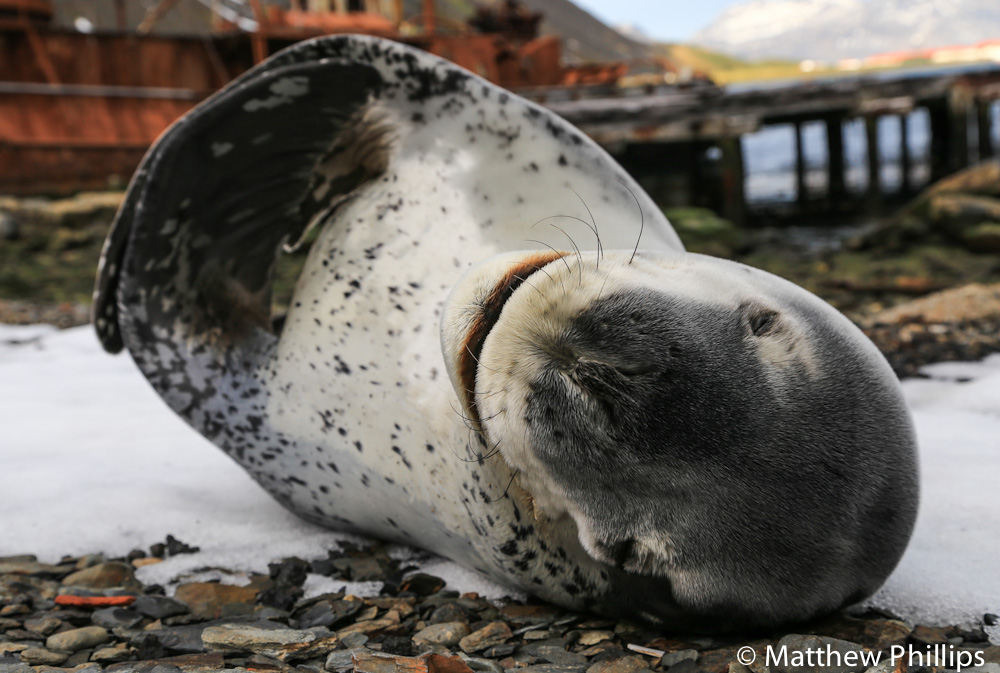 A dangerous visitor…..Leopard Seals are quite a rare sight. This 2m long male was found having a rest on the beach at Grytviken. A fully grown female can be just over 4m! This photo makes them look cuddly and unthreatening….the next one won’t. 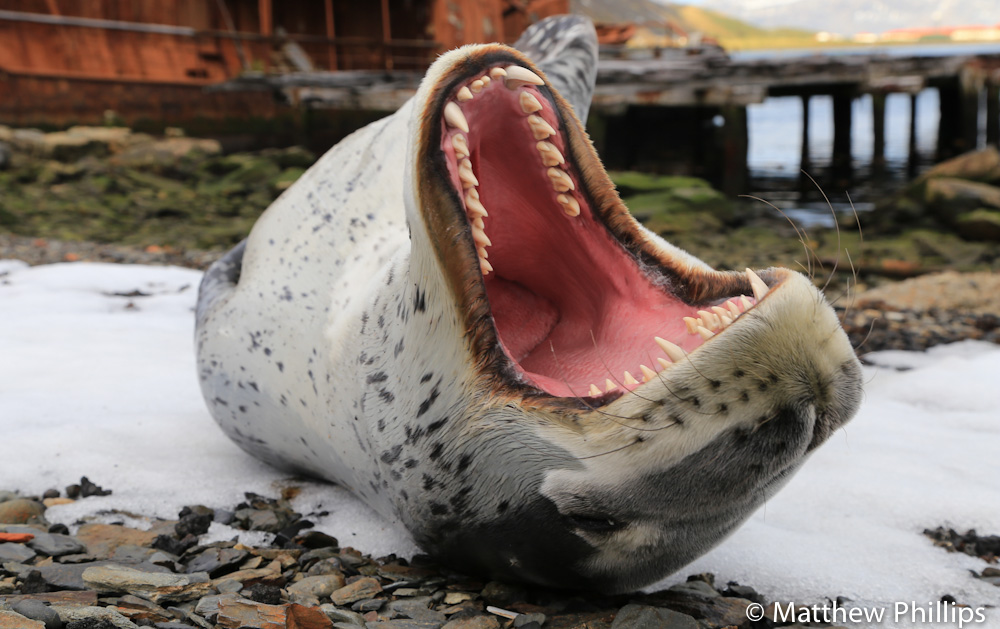 Having a good yawn he shows his teeth. Leopard seals are second only to Killer Whales in the Antarctic and can consume up to 8 (depending on size) penguins a day. Their tri-cuspid teeth are the most highly developed you’ll find anywhere on the planet! Evolved for chewing, tearing and straining – perfection. 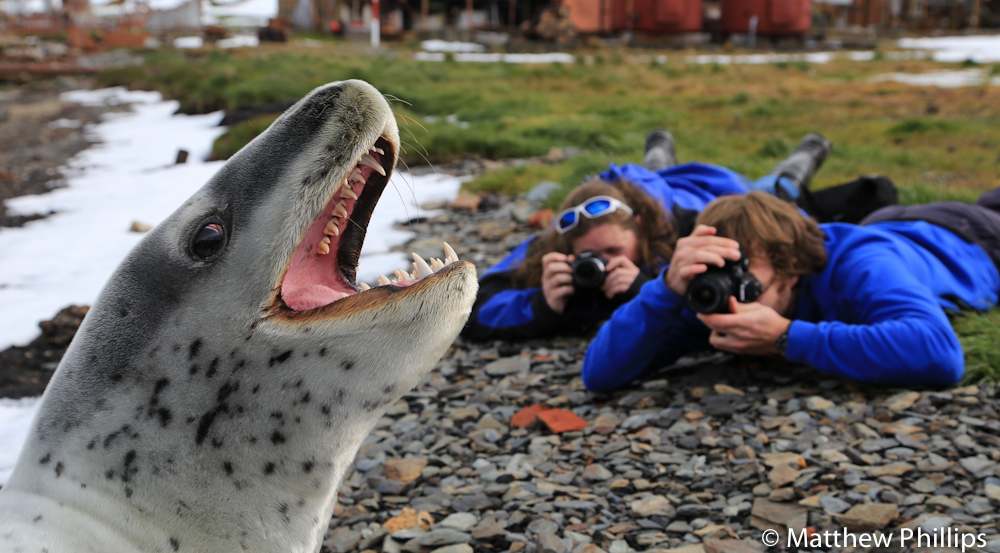 Julie and Daniel getting a shot from a safe distance, not the animal for a close up. My telephoto lense came in handy. 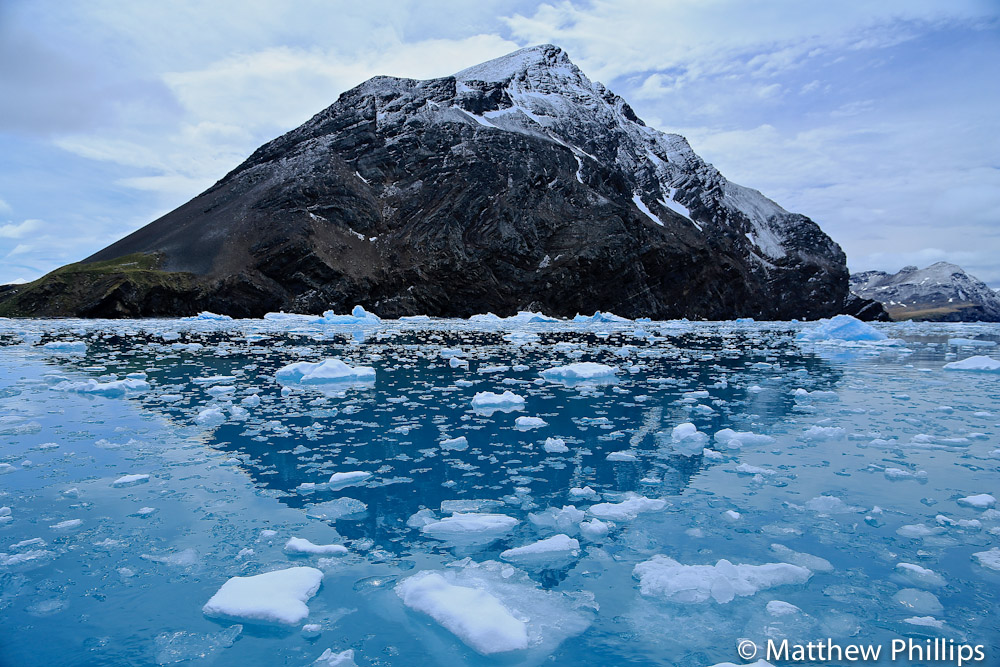 Lots of brash ice and some ‘growlers’ in Cumberland Bay West. A ‘growler’ is a piece of ice that’s bigger than brash but less than 5m across. 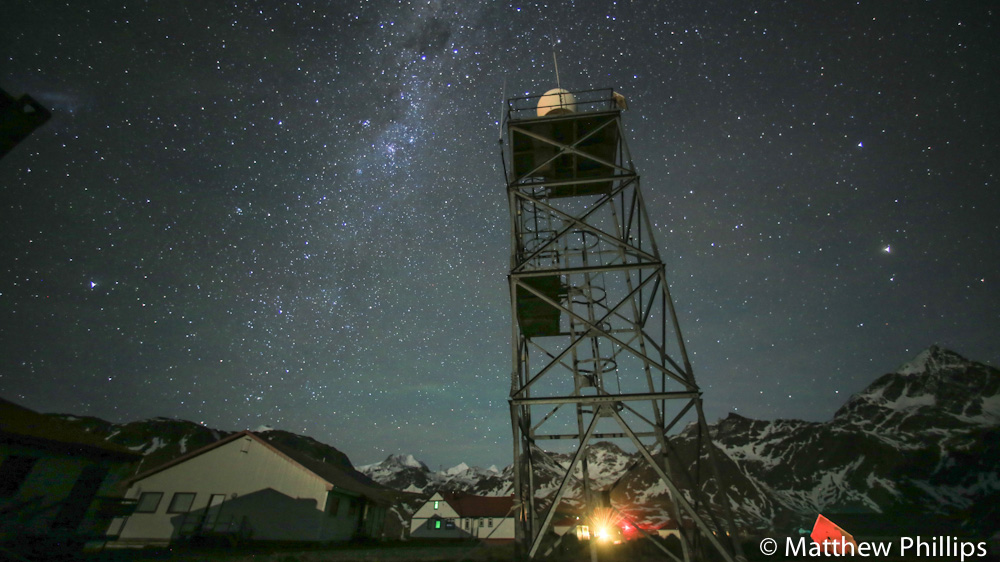 With the long cold nights now with us it makes for some incredible star shows. The comms tower makes for a surprisingly good foreground. 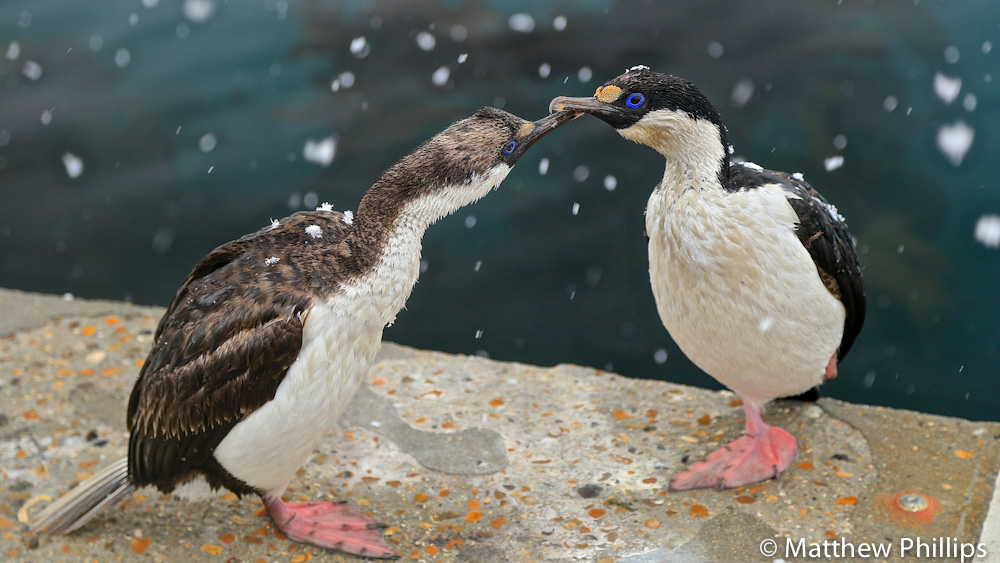 Must be getting cold if you need to stand on one foot. Easy to see why they are called Blue Eyed Shags.

Late afternoon, the peaks of the Barff Peninsula are lit up by the setting sun. 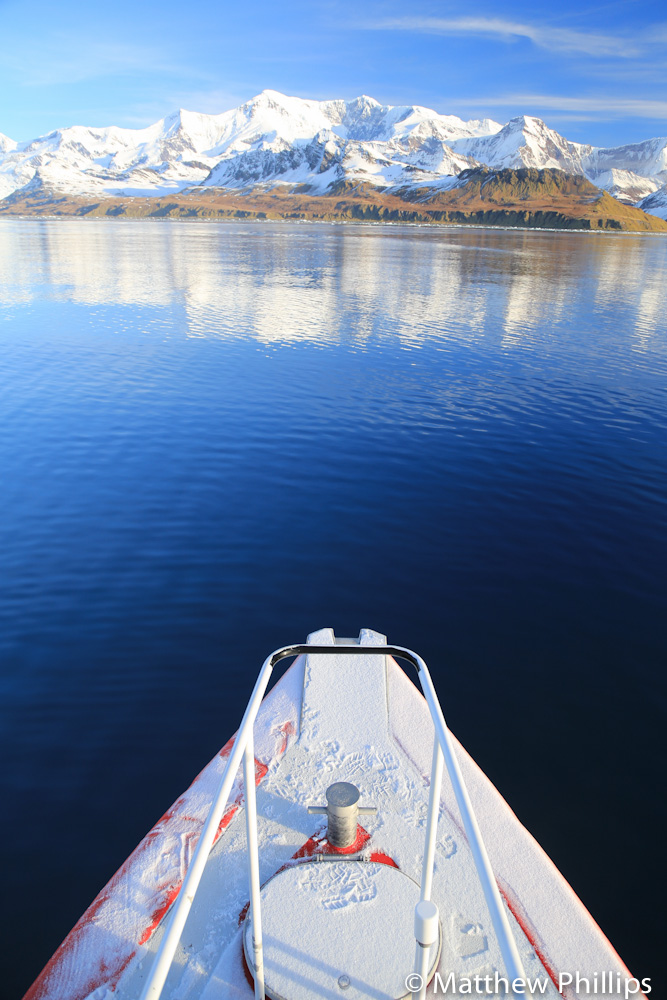 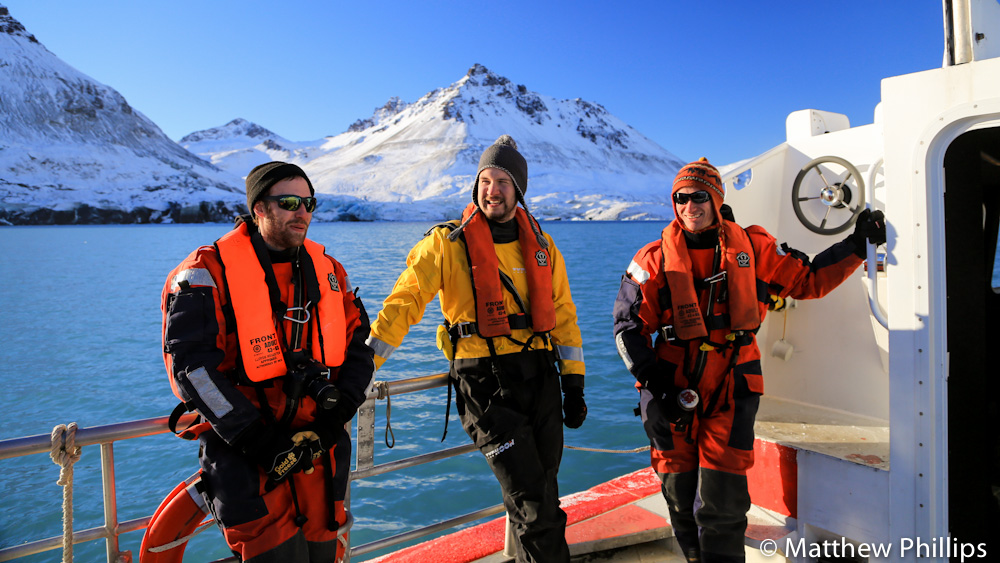 Daniel, James and Dickie on the back deck of Prion (second jet boat) as we head to the Neumayer Glacier in Cumberland Bay West. Tell-tale signs on the mountains behind give away the previous extent of the glacier. A distinct line visible through the snow half way up the mountains shows where it use to slowly grind the mountainside. 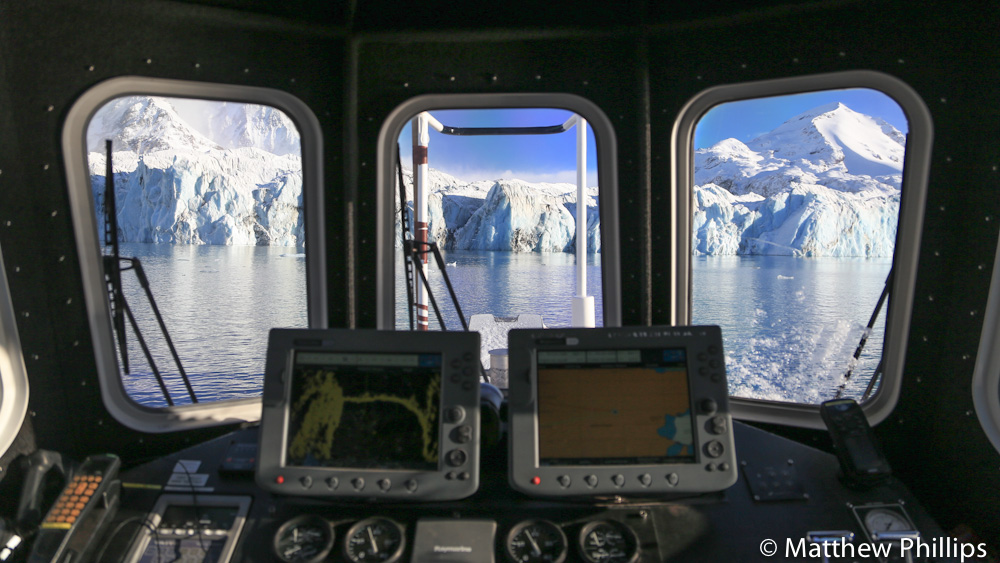 The front of the Neumayer Glacier from inside Prion’s wheel house. 60 years ago we would  have been under 1,000 feet of ice…. 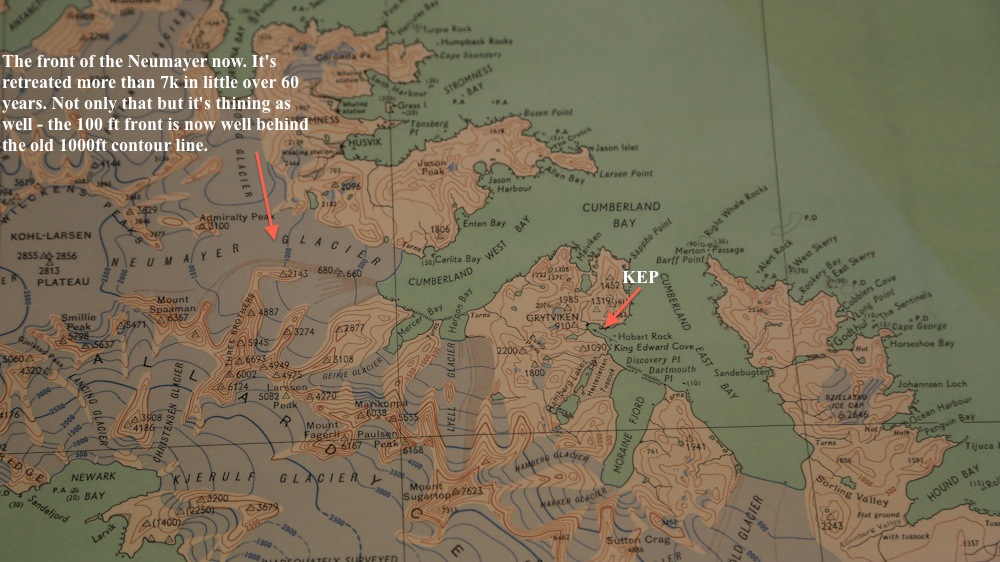 A map from 1958 shows the pevious extent of the glaciers. Prion was where the ‘G’ is in ‘Neumayer Glacier’, also the depth sounder on the jet showed 280m of water under the hull – the ice would have touched the sea bed, at its extent in 1958. I make that a total height of nearly 2,000ft or over 600m! At the same time the Nordenskjold (bottom of Cumberland East Bay) has only retreated 1-2k. 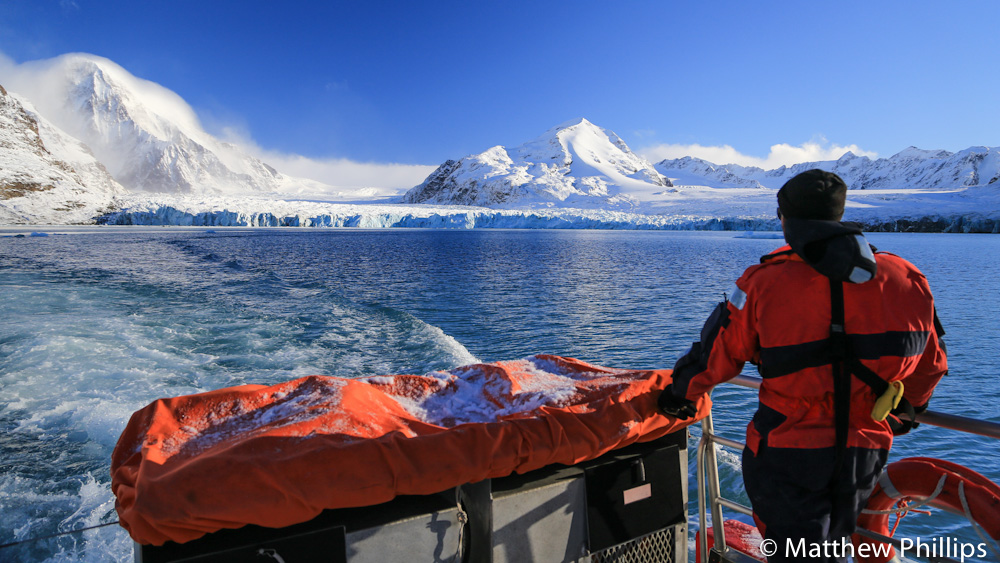 Daniel looking back at the Neumayer as we depart, just as the clouds start to roll in over the mountains. 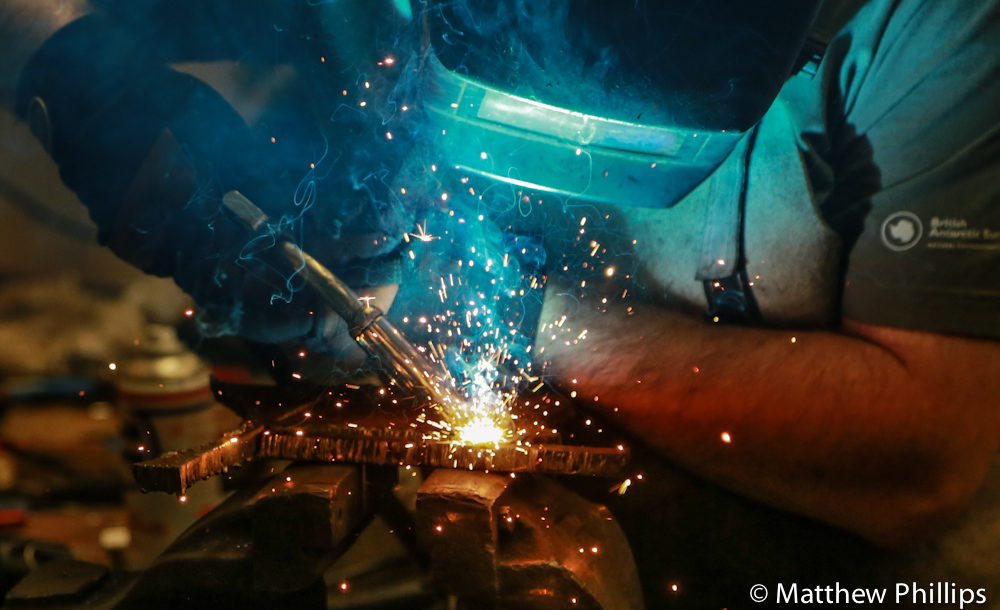 Mid-winter is coming. Matt welding some steel plate in the metal workshop. The 21st of June is mid-winter in the southern hemisphere. A big celebration on Antarctic bases as it means the light will slowly return (some bases will not have seen the sun for months at this point) to the Antarctic. Some time (usually months) before, everyone on base pulls a name out of a hat, and then has to make that person a mid-winter’s present.