A month in the dark

Well, I’m fairly behind with the blogs! I’ll play catch-up over the next few weeks. There are two main reasons for this. Firstly, the internet was down for six weeks from mid-January. Secondly, I’ve been busier than ever, my to-do list was longer than a Leonard Cohen song, and things are only settling down now. Anyway, I’ll do what I can to bring you up to speed with life on South Georgia.

When was the last time you went without the internet for more than 24hrs? A week? We don’t have TV, mobile phone reception or newspapers so no internet means we are in the dark to the outside world other than satellite phone, which is expensive. It’s not unusual to lose the internet for a few days in a row here. My previous record was four days. But six weeks was interesting.

The first few days it’s annoying, you’re expecting it to come back any minute. Four days to a week is nice, it feels therapeutic and you start to get used to the idea. Nine days was the previous KEP record for no internet, there was a sense of achievement in passing that mark. Week two to three was back to being frustrating, by that point we didn’t really know what was going on in the real world, other than Trump had moved into the White House! Then it cycled back to being the norm again. It seemed to come in waves, frustration first, followed by apathy, and with each set the waves would last a little longer. 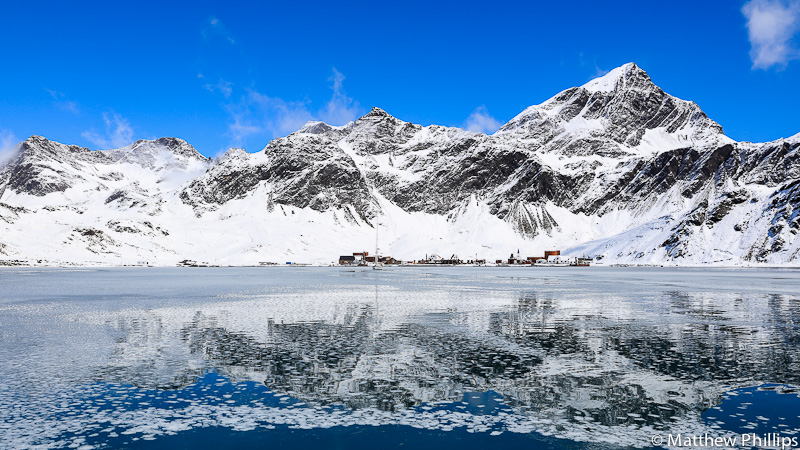 January ended up being the third busiest month for boating on record, which was a challenge as the other boating officer was back at home dealing with a broken knee. At least I had some nice views from the boatshed while trying to keep on top of all the boat maintenance. 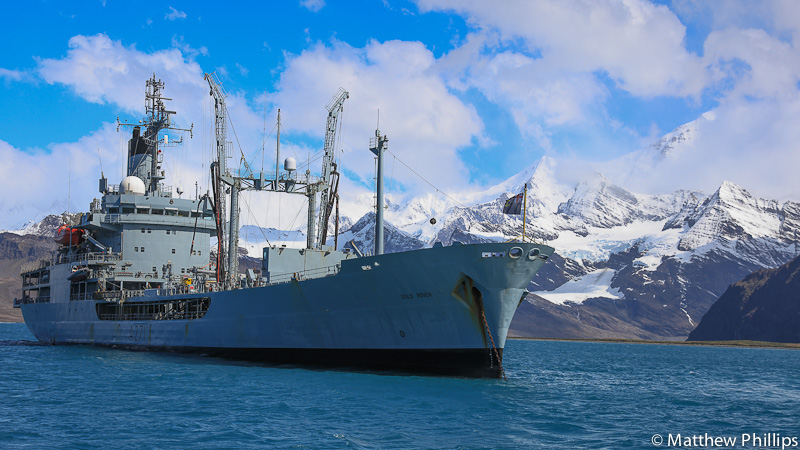 One of the reasons it was so busy was the visit of three Royal Navy ships. Well, this one isn’t real RN. It’s the RFA (Royal Fleet Auxiliary) ship Gold Rover, which was down supporting HMS Portland. Gold Rover is due to be decommissioned later this year I believe. We helped them with pax transfers from ship to shore. Being the solo boatie meant that was pretty much down to me and an alternating crew member for the day. 44 crew to and from shore in a day was good warm up for the main event… 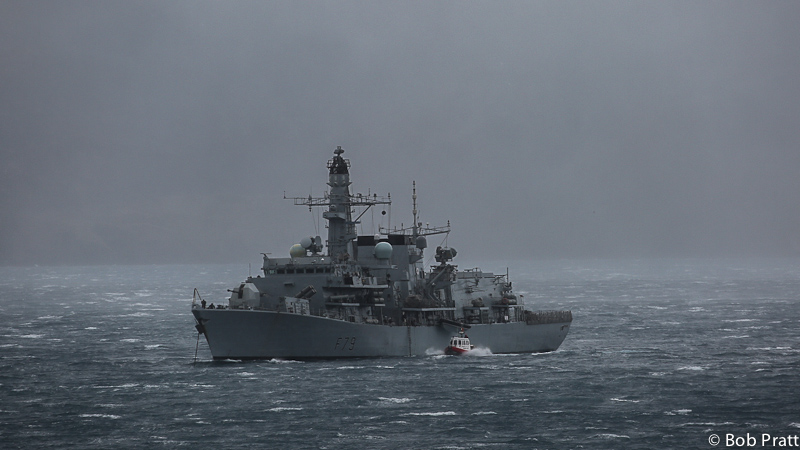 The main event was HMS Portland the next day, in much fouler weather (what a difference a day makes!). She had 212 crew onboard, I think her smaller boat transferred 12 of them ashore and we did the remaining 200. By the end of the day I think we returned about 170 of them to the ship (I make that over 400 pax transfers in one weekend).  I stayed on the helm all day and swapped crew at lunch. Easily one of the best days of work I’ve had here. The wind at the end of the day, when Bob took this pic, got a little…sporting. 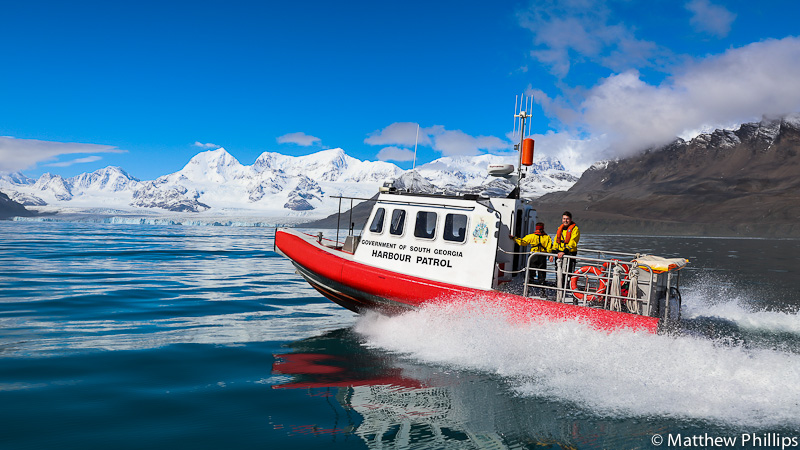 Megan and Jacob (deck of the jet boat) were other clients for the KEP boating taxi service. ‘Team Fungi’ as they were known, were here to look at…fungi, strangely enough. 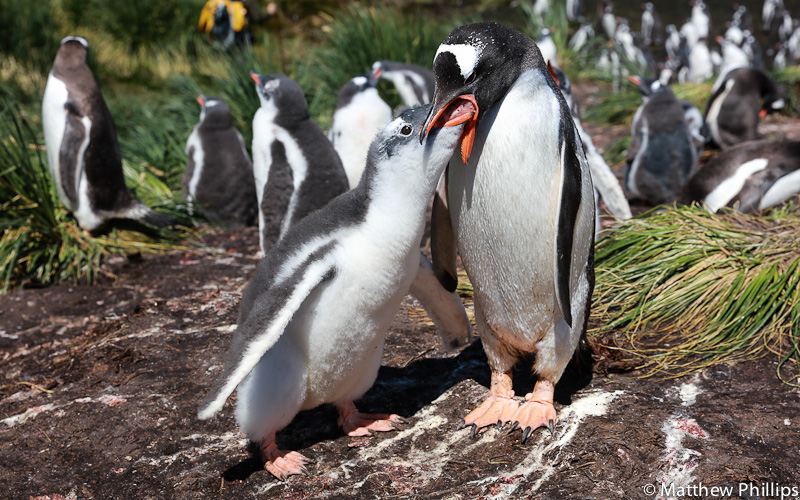 I did find some time to get out with the camera and see how the wildlife was getting on. The gentoo penguins and their chicks were doing well at Maiviken. If you look closely enough you can just see the regurgitated krill being passed over from parent to chick… Lovely. 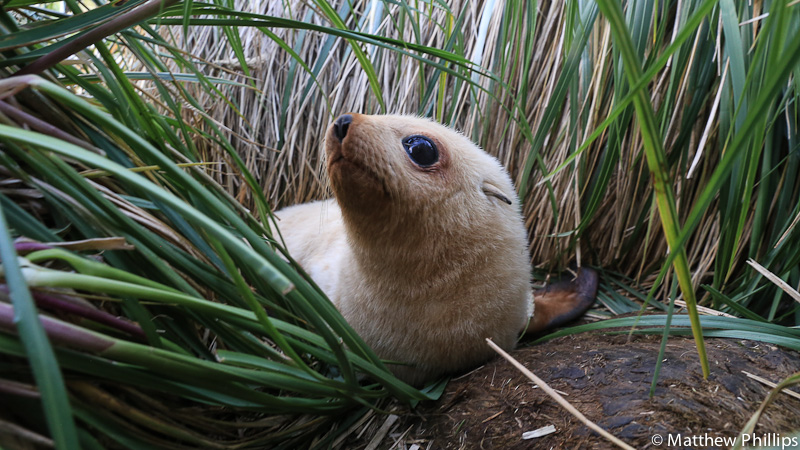 I’ve been trying to get a photo of a fully grown male fur seal for a few years now, I’m not having much luck! Still, the blonde pups are some of the cutest things around. 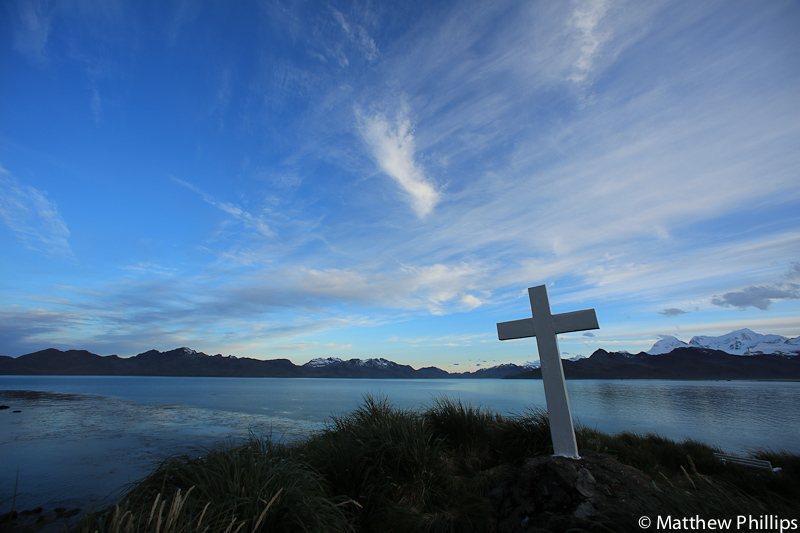 I’ve been trying to get some more time lapses, in the hope that I might finally get a third South Georgia film out before I go. This was from an attempt to catch some of the lenticular (look like flying saucers) clouds that often look so impressive at sunset. Hope Point and Shackleton’s Cross is as good a place as any to set up. Not much luck this time, still a nice view. 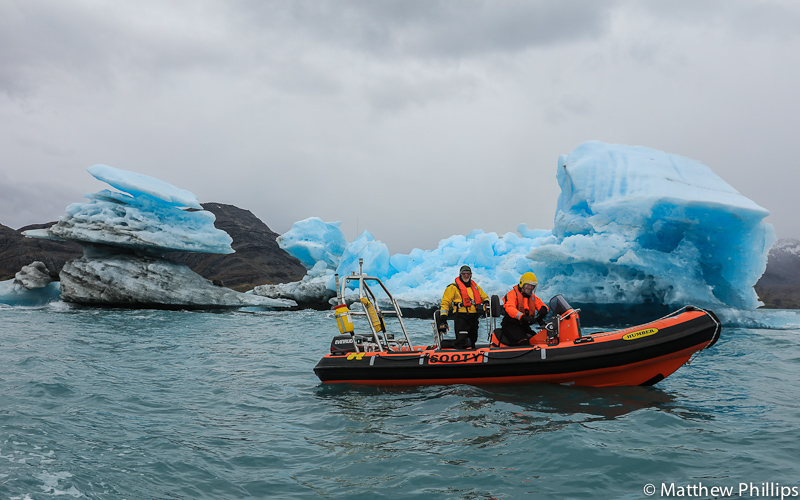 With the other boating officer being out for a few months the outgoing guys were asked if they wanted to stay and help for a few months. KEP stalwart, Erny (left), took up the slack and gave me a hand until the end of the month. Part of my job is the maintenance of the boats, which includes doing the first line maintenance on the engines. I can do most of it but it was great having a mechanic to back me up! 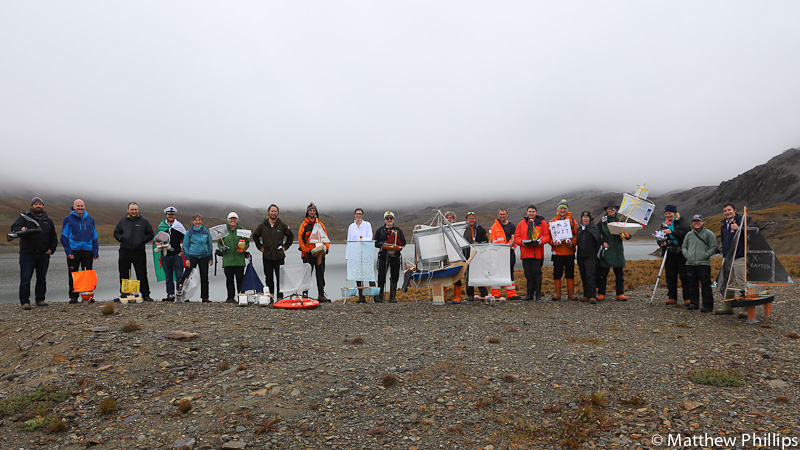 The Third Annual Royal South Georgia International Regatta took place just before Erny left (he pretty much started it). It’s grown leaps and bounds over the three years, not only in numbers but also in the size of the vessels. 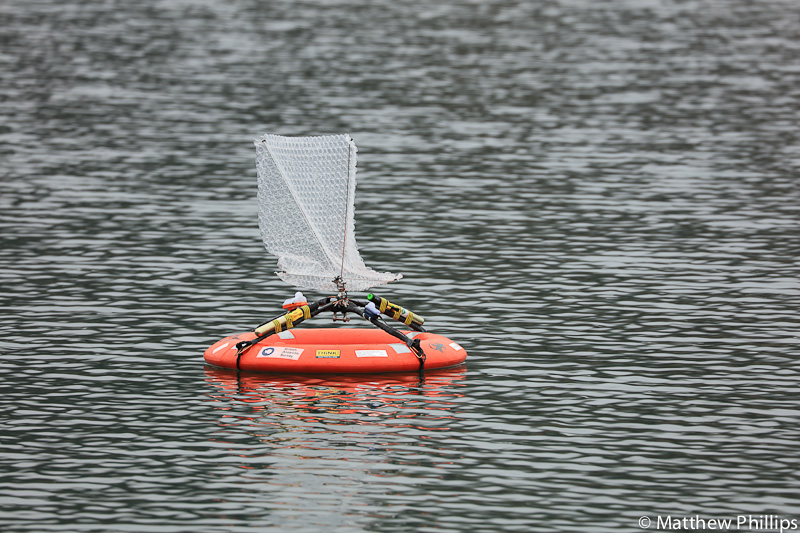 It’s often expected that the boaties will do well at the regatta, unfortunately that’s not the case. A boatie hasn’t placed on the podium ever. This year I was determined to do well. My sail was made of bubble wrap, which I thought might aid with self-righting, in the event of a capsize. The mast was made of a swivel that would allow the sail to turn 360° so it would always sail downwind. I even put a couple of old CO2 cylinders with automatic lifejacket activators on to help right if it went over. It didn’t flip so I tested the system once the race had finished… It still needs some development. 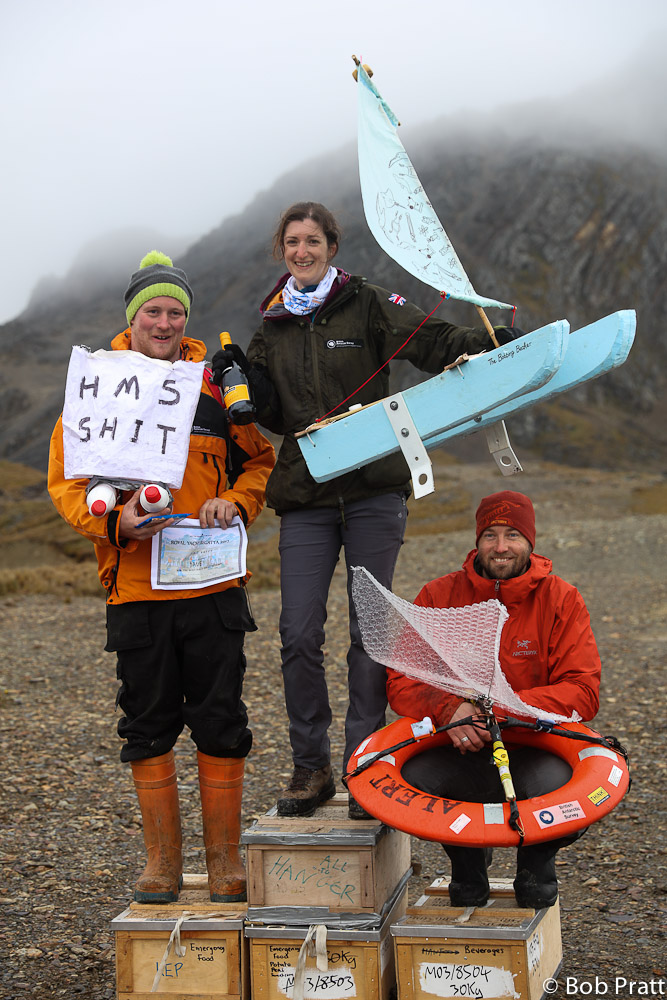 Well, I finally did some justice to the boating department. Vicki won outright with her entry ‘Bobbing Beaker’ followed closely behind by Dave’s entry ‘HMS Shit’, which was far from what the name might suggest. Who would have thought that a small hemp bag, two empty toilet cleaner bottles and some sellotape would work so well! Not only did I have to live with being beaten by a beaker (scientist – check/google the muppets character by the same name) but I had to crouch on the podium as it was so feckin’ big! Not that I’m bitter about it, not one bit. 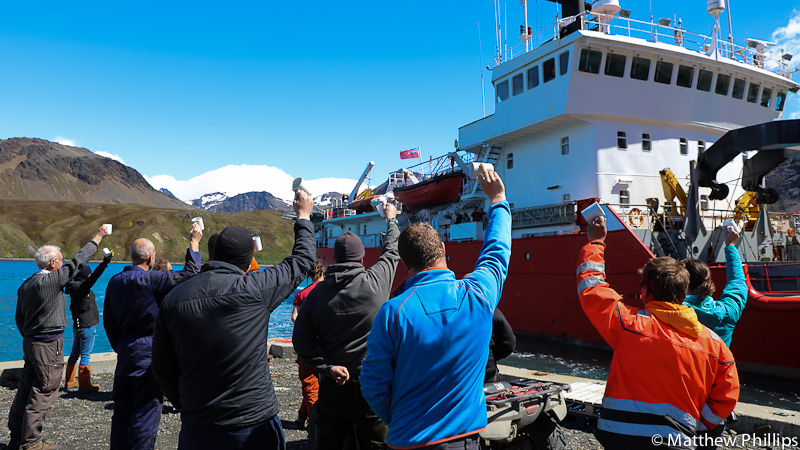 After another two years on the island the end of January marked the time for Erny to leave. He’s well known on base for leaving empty cups of tea scattered about the place. Often flares are set off to wish people farewell, it seemed more appropriate to salute Erny with a mug held aloft. 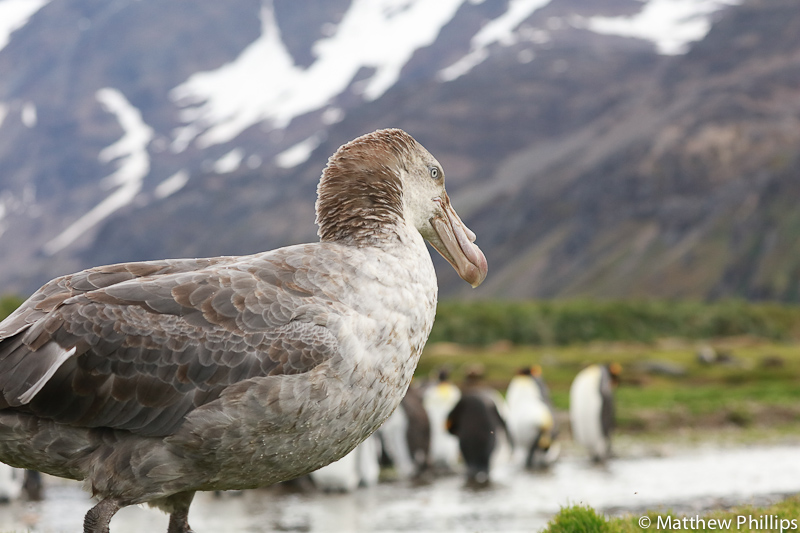 I managed a day off to go and chill-out with some of the wildlife at Penguin River. The giant petrels are still my favourite bird down here. I think it’s the haunting eyes. 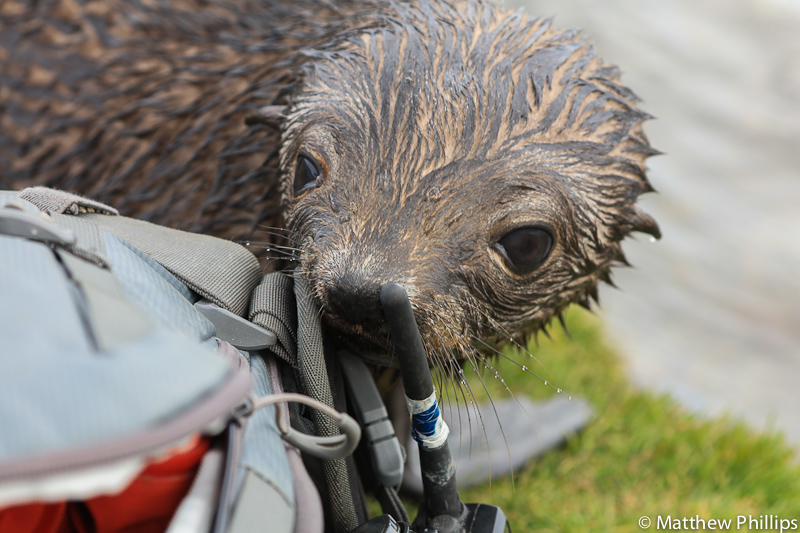 At a couple of months old the fur seal pups get quite inquisitive. This one took a particular interest in the aerial on my VHF radio. 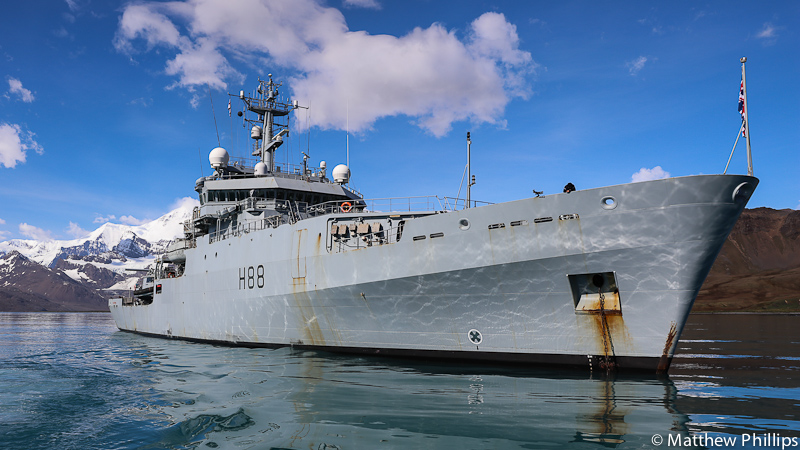 The third and final RN ship of the month was the oceanographic ship HMS Enterprise. Yes, the temptation to slip a Star Trek quote in over the VHF was too much for most who had the opportunity. I made some quip about ‘the engines canny take it anymore’ over the radio, in my most hammed up Scottish accent. A few people on base thought I was being serious! Enterprise was down here having spent her last tasking in the Mediterranean rescuing immigrants headed for Europe. She saved over 9,000 people, which is apparently far more than any other ship during that time. The trip to South Georgia was an opportunity for the crew to ‘decompress’ having dealt with some difficult situations and sights during her time in the Med. Apparently there was one crew member who could speak French, the language most of the immigrants spoke, and it was their job to break the news of a death in the family when the news came through. I’m not sure how I’d go about that in English, never mind a second language. 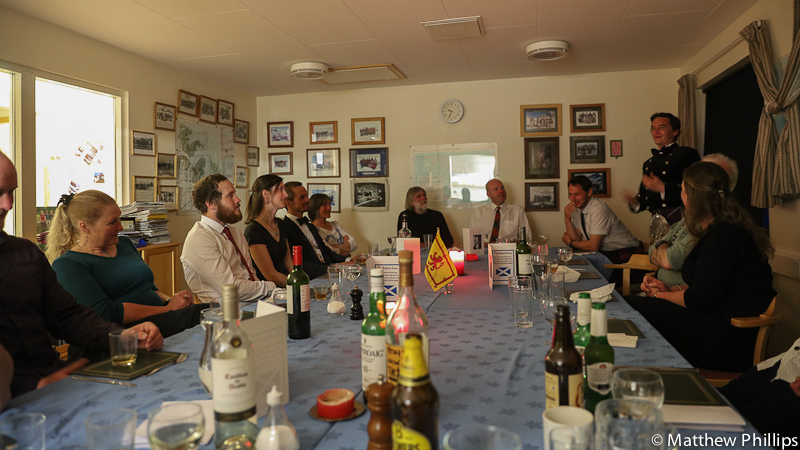 January 25th is Burns Night, for the second year running I hosted the event. Though, if the truth be told we did it on the closest Saturday as that fitted with the base routine more. The BAS staff take it in turns to cook for each other through the week. That’s not a big problem as there are normally only eight of us, plus Rachel (postie) but on a Saturday you are expected to invite everyone on base for a three course meal. Everyone on base normally means somewhere between 15-30 people during summer. Luckily I wasn’t the only Scot about at the time so I had help with the cooking. The speeches this year were fantastic, Fraser (Doc) and Rachel gave two of the best address to the lassies and reply from the lassies I’ve heard.

Ok, they should come thick and fast over the next couple of weeks. I’ll have February done before the end of this month and then March during the first week of April. I say that, but if the internet drops out again I may be gone some time!