South Georgia – Midwinter, swimming and abuse from the UK

Late May saw the workshops over-run like sale-time in a Hong Kong department store! Ok that’s a bit dramatic, but the approach of mid-winter saw people crank up their present making (more on that later) so the metal and wood workshops became the go-to place if you were looking for someone.

That didn’t stop James and I taking a couple of days holiday in mid June to explore some of the western side of the Thatcher Peninsula. James was particularly keen to get away as he would be spending several weeks at sea after mid-winter, observing on one of the fishing ships. 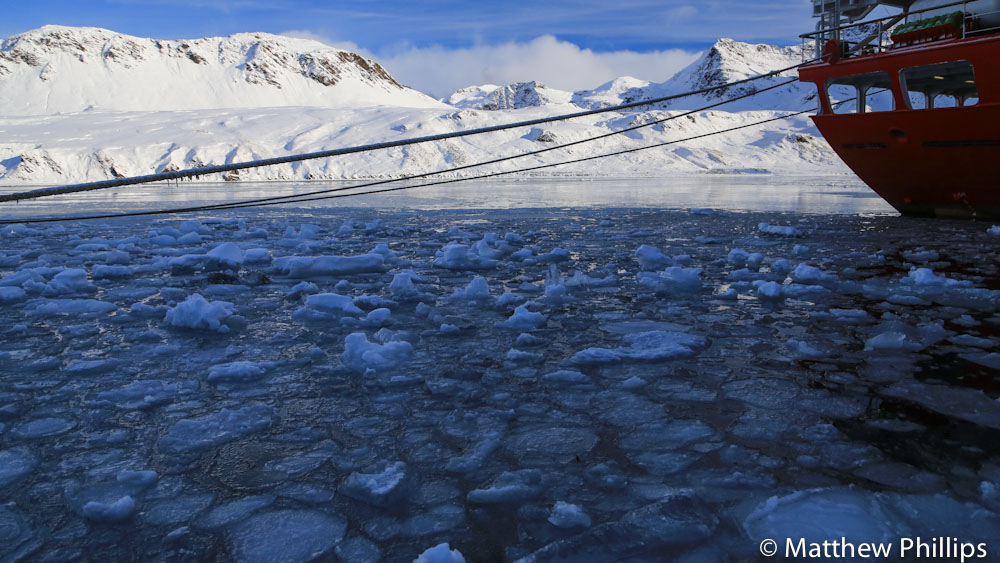 Early June felt like winter had arrived with sea ice forming in King Edward Cove. Some ‘Brash’ in there but the flat stuff is “Pancake ice” – frozen sea water. 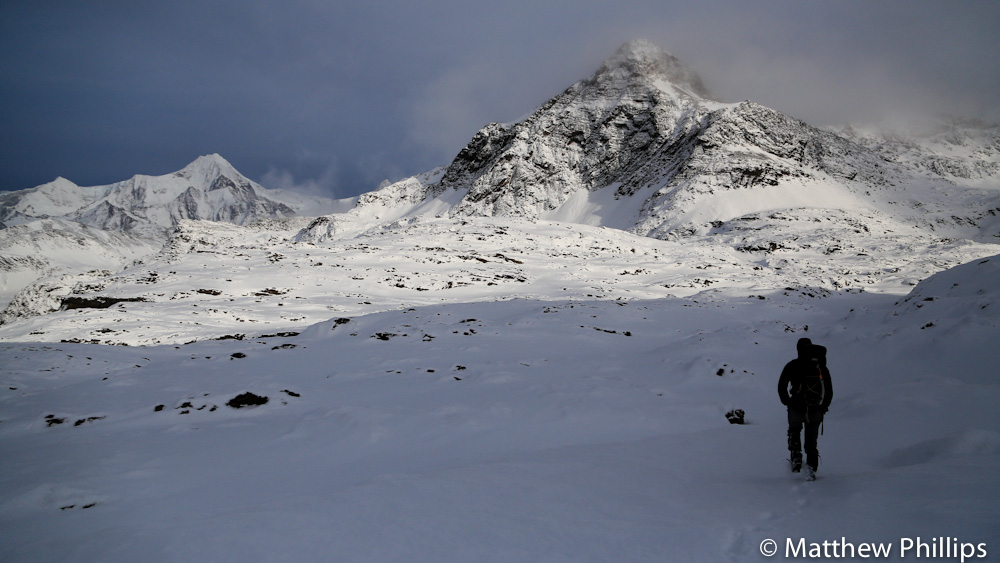 James making his way towards Boulder Pass with Mt Hodges in the background. 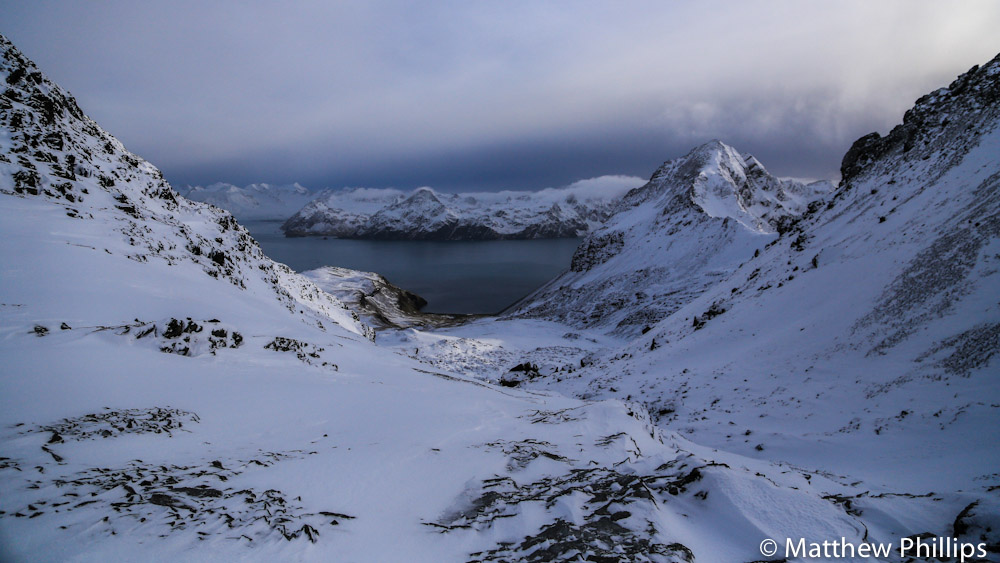 The view down boulder pass. In summer it’s easy to see why it got its name.. not so much just now. Cumberland Bay West at the bottom. 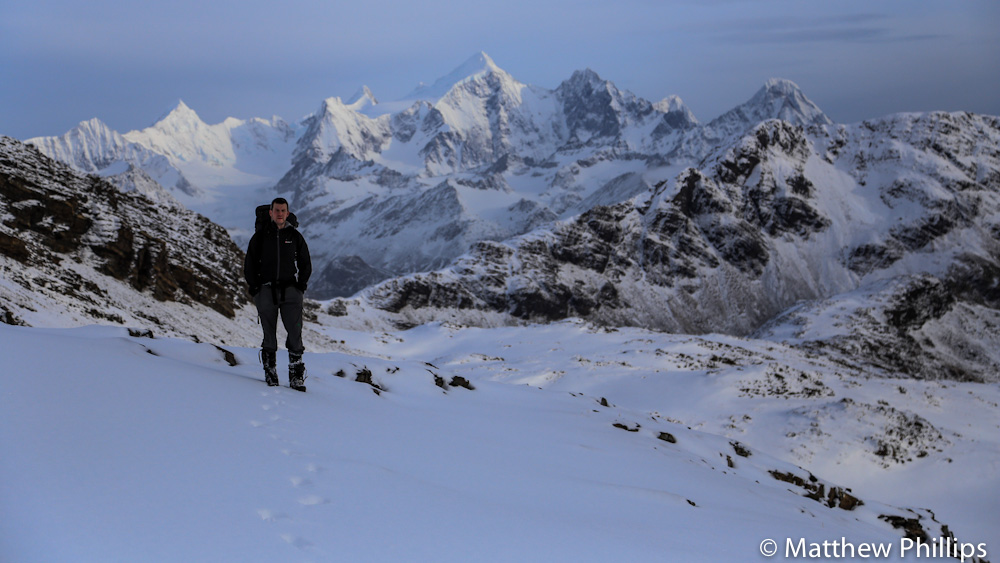 Now on the western side of the Thatcher peninsula, the views into the interior mountains become increasingly impressive. 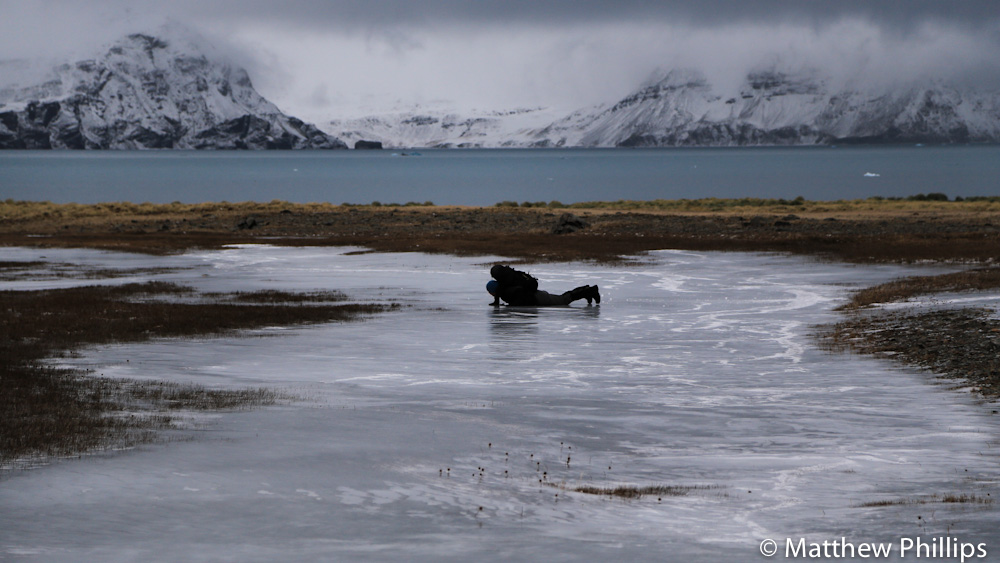 James showing off his method for crossing frozen streams…he’s obviously spent too much time around those seals! 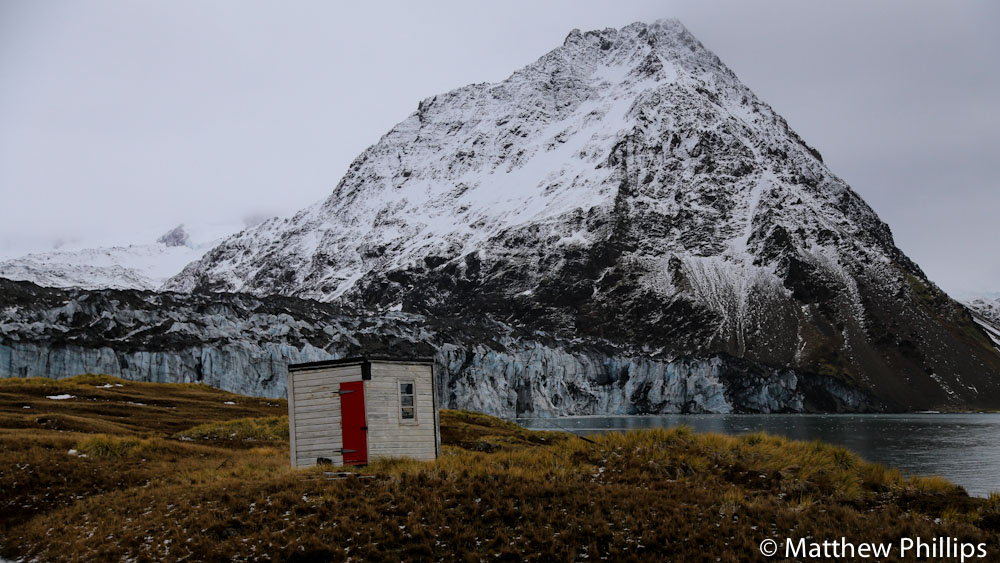 Harpon hut with the Lyle Glacier behind. There was a huge landslide years ago that deposited all the rock and soil on top which makes it look dirty. The camera is level – it’s the hut that’s slanted! 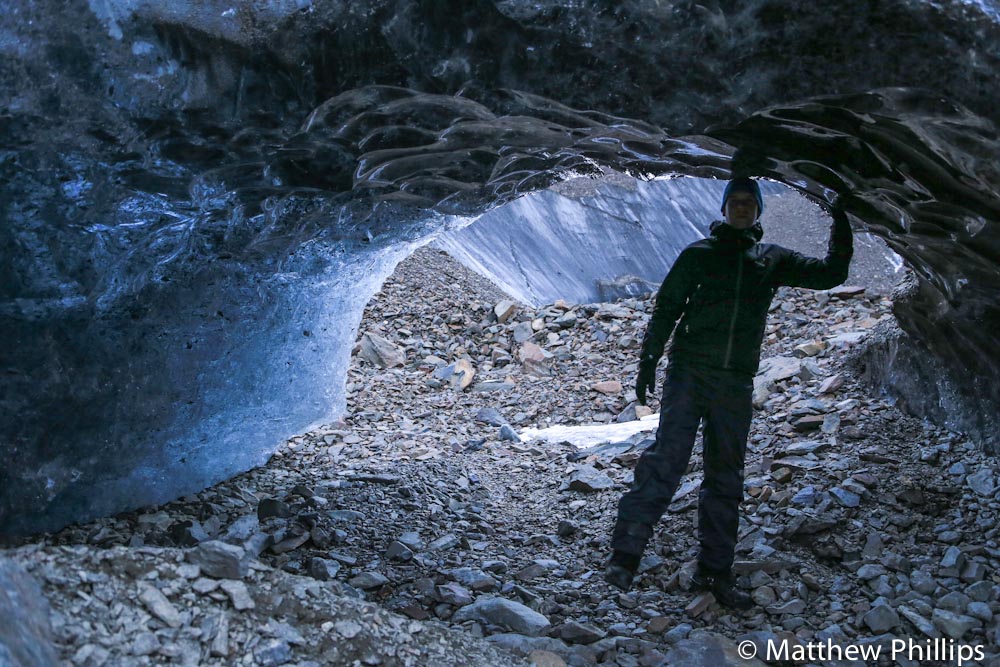 James having a closer look at an ice arch coming off the side of the glacier. 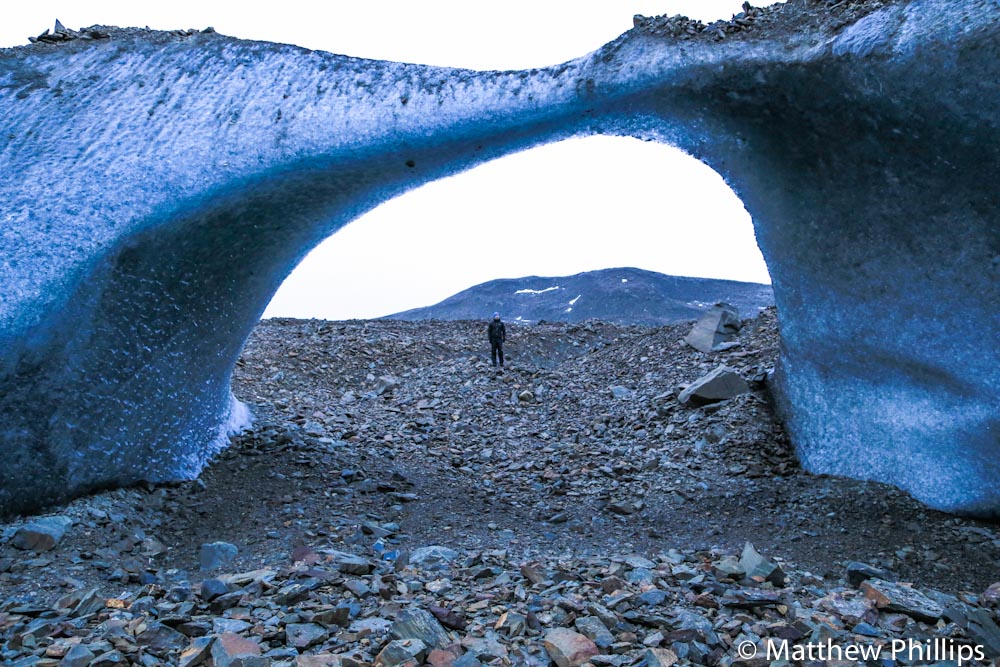 Then we found a bigger one! 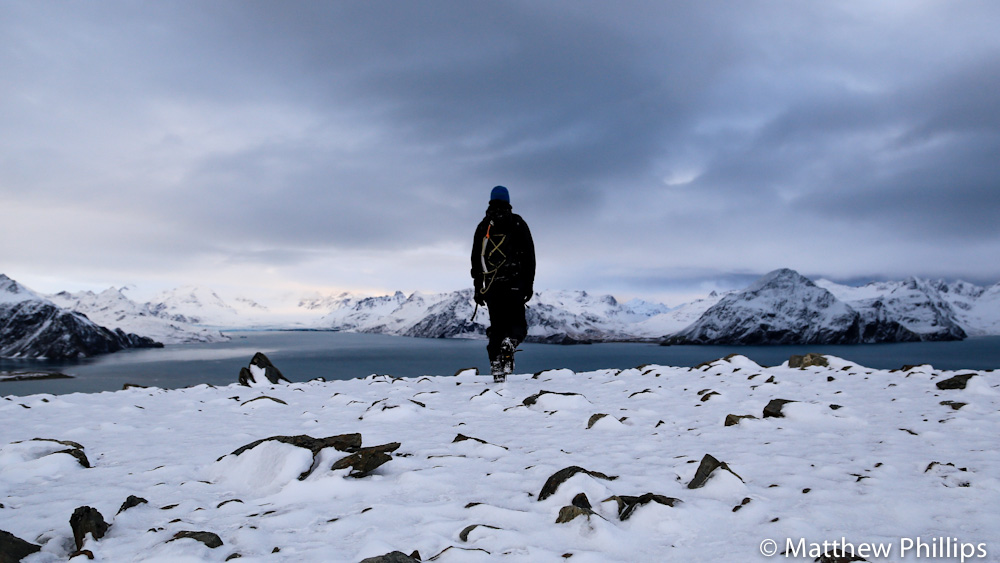 Day two: Heading back to the Hut after taking in a 500m+ peak. Weather wasn’t the best but had started to clear as we made our way back. 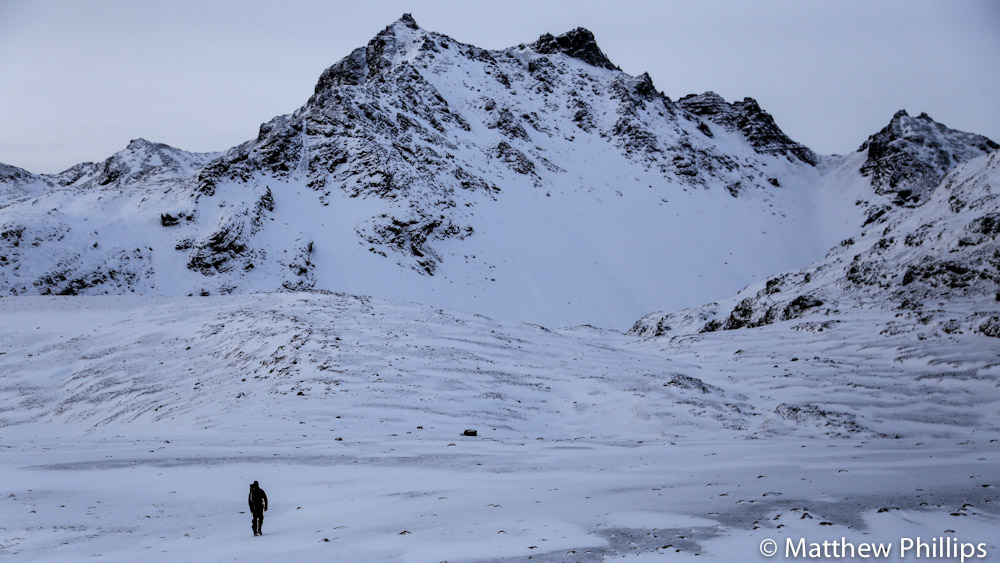 Day three: We headed back to base via Pinnacle Pass – the pass is the obvious saddle on the right hand side. This was about as good as the sky got the three days we were away. I wasn’t deliberately taking photos of overcast skies. 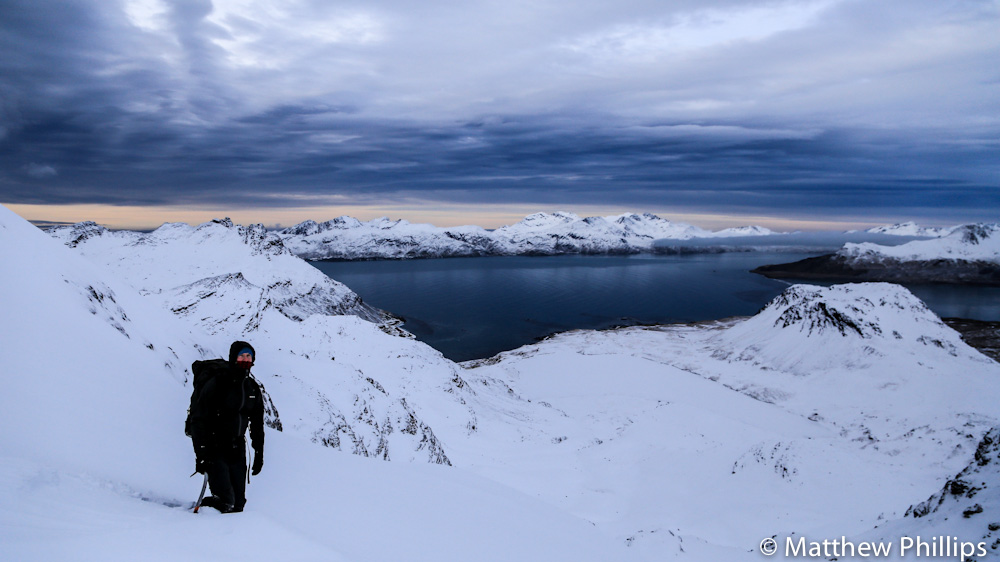 Making it over the pass, Cumberland Bay East is visible. By this stage we both had ice axes and crampons in use. Given the threatening sky and  underfoot conditions we decided not to take in one of the peaks that flank the pass.

If you remember the photographs at Christmas you’ll have noticed it’s not a huge celebration here. Mid-winter is our Christmas..and more. Mid-winter marks the half way stage for most people on a Southern tour, and the slow return of light leading into summer. The week is a holiday for everyone on base. We started on Monday the 16th and finished a week later. While the big day is the Solstice (21st) there are various events planned before the big day! There’s a Winter Olympics – comprising various activities including: sledge racing, wellie tossing, pen flare shooting at petrol doused cloth, and javelin. I have some footage that I’ll try to make into a short film and find a way to put on here in time, but for now all I’ll say is my team won the team event and I came out top in the individual table. There was a movie day, treasure hunt and any remaining time is useful for finishing off presents. The main day itself starts with the Base Commander making everyone a fry up breakfast (which he offers to deliver to people’s ‘pit rooms’). That’s then followed by an event that usually gets the Doctor a little twitchy (there  is a real chance of hypothermia)… the mid-winter swim! 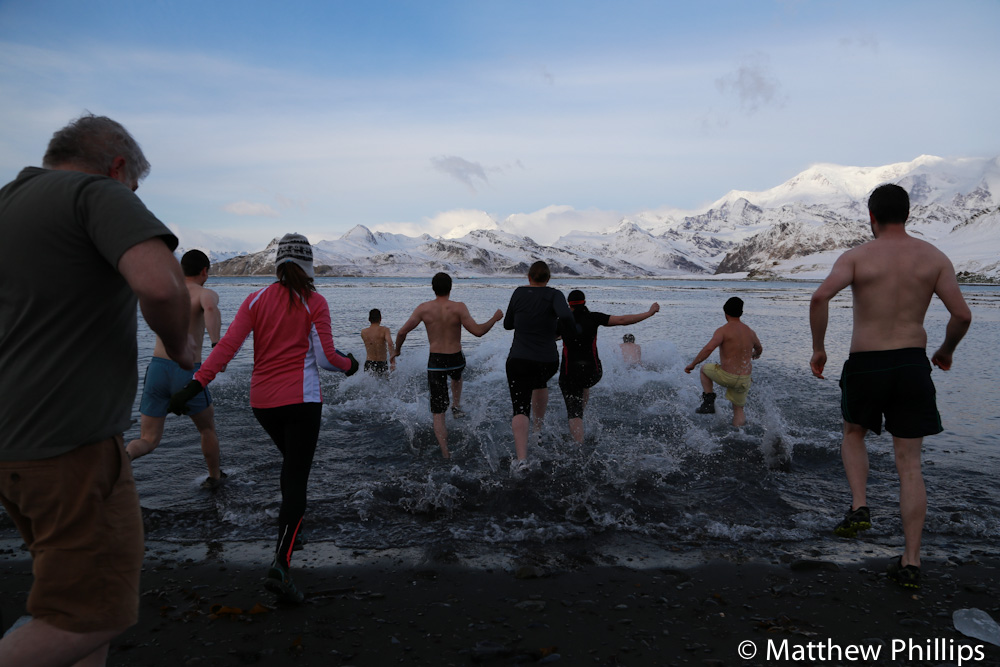 This is a tradition at KEP, all base members must participate (only reasonable excuse would be the sight of an Orca or a Leopard Seal). The amount of clothing worn and time spent in the water is optional. We tried to get everyone facing the camera in an attempt to capture the ‘Midwinter photo’.. 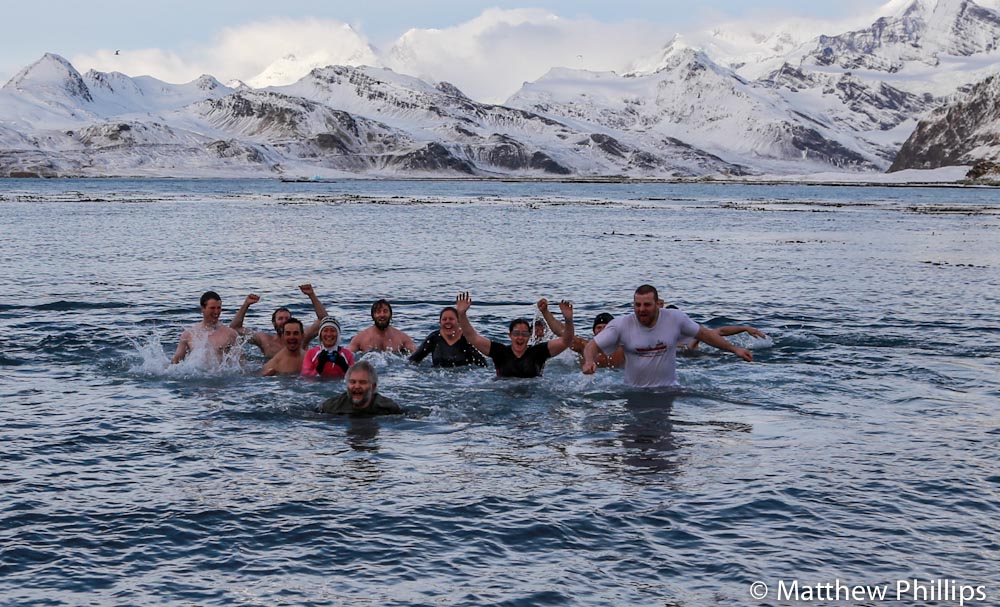 Well it was a good idea, and an ambitious one too! Getting people to pose in 1 degree water for any length of time isn’t easy.  I have a short film of this that will hopefully appear in the next blog post. 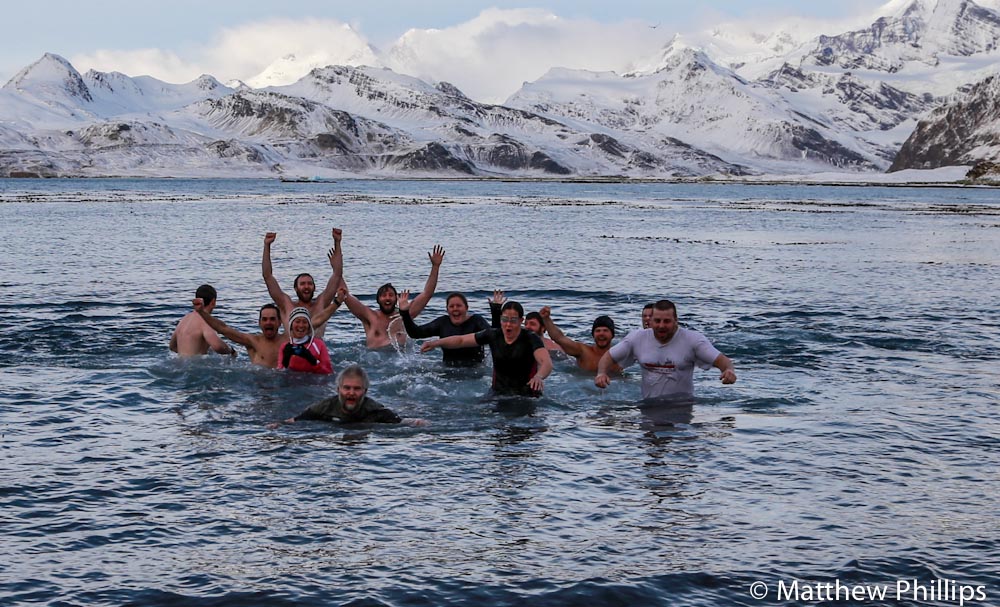 Matt, Jo and Joe making a quick exit. I expected more from Matt and Joe being hardy techies! The Sauna is about 40ft behind the camera and is turned on one hour before the swim so everyone can pile in after suffering the icy cold water. 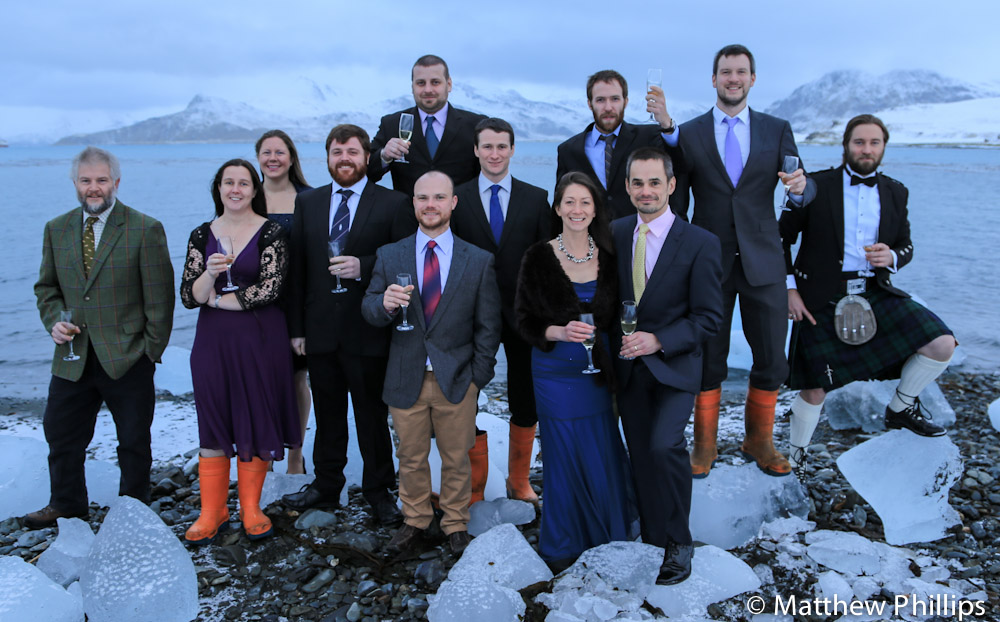 Responsibility for the mid winter photo fell to me this year, a great honour. The dining room wall has photos from the wintering teams going back to 1970, the only missing year is 1982 – thanks to the Argentineans, when they invaded South Georgia they repatriated all the BAS personnel and the military contingent were kept as prisoners of war.  A job for the next few weeks will be to print it off and make a frame. The new face in the front is Chris. Chris arrived on the Pharos to relieve Joe who has been given a high-flying managerial job back at BAS Cambridge  (UK). After the photo it was time for present exchanging. 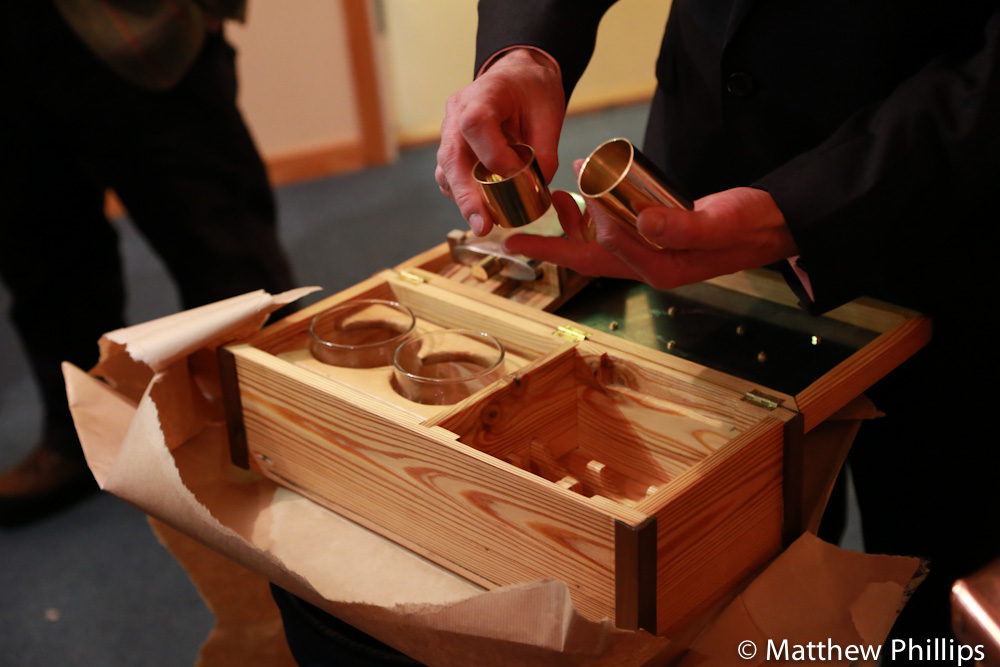 Simon received a box with a couple of brass whisky measures and a stainless steel hip flask. Joe did everything except for the actual glasses – the lid of the box is a touch of class and can be seen in a photo further down. 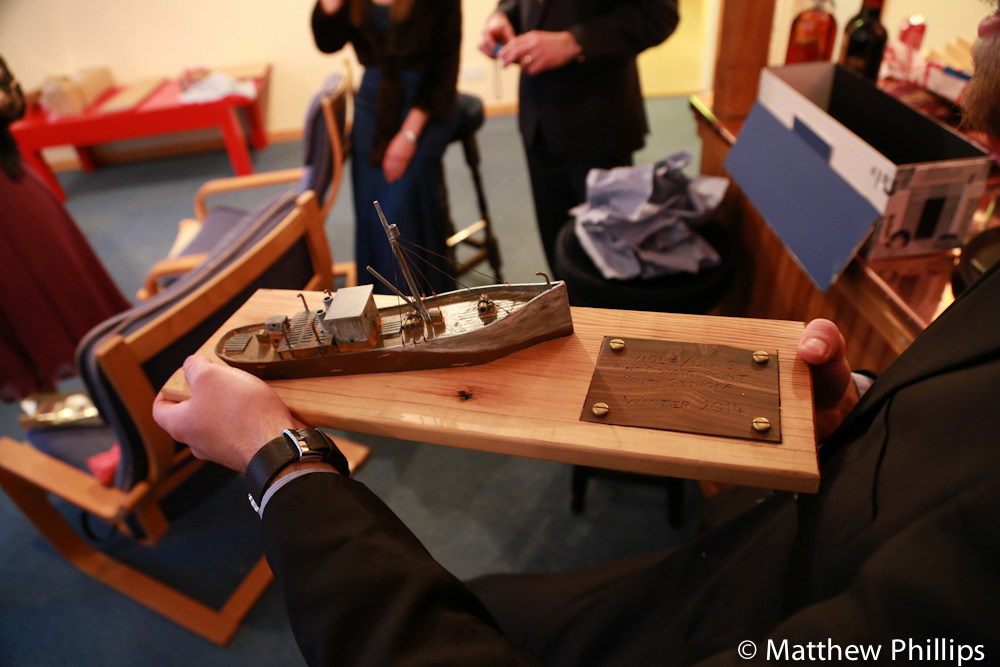 Matt made a scale model of the ‘Dias’ whaling ship, for Daniel, which is grounded over at Grytviken.

The Dias as she is now and a whaling harpoon in front of Discovery House. 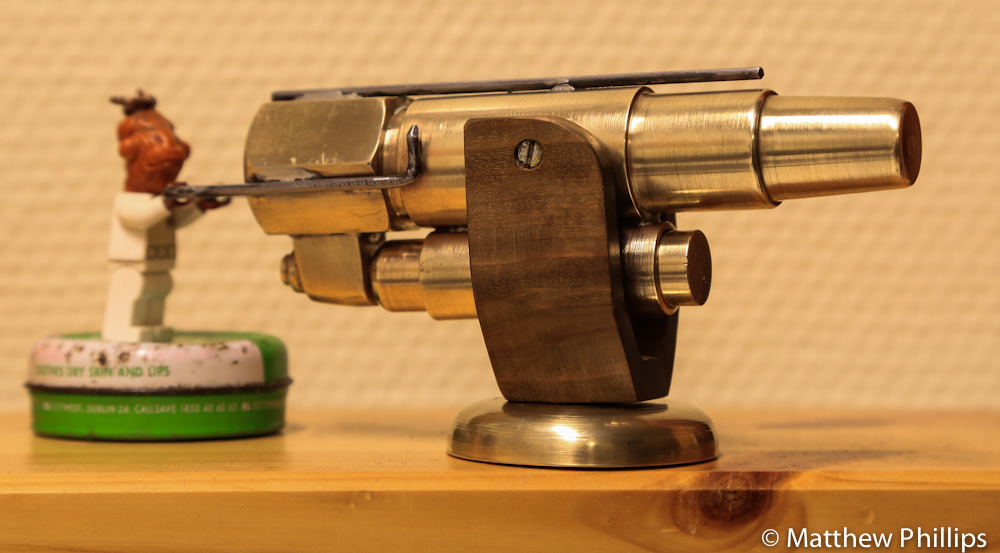 Here are the fruits from nearly 30 hours of labour. I pulled Joe out of the hat, and as he was leaving I thought I’d make something relevant to South Georgia. What better than a whaling ship harpoon!? Most of the parts were made on the metal lathe, the wooden cradle and ‘undercarriage bottle connector’ were hack-sawed, filed and emery papered into shape.  Matt helped with the welding. I didn’t want to give it away once it was finished – I might make one for myself before I go! Admiral Akbar is for scale and is not included (one for the Star Wars fans – ‘It’s a Trap!!’). 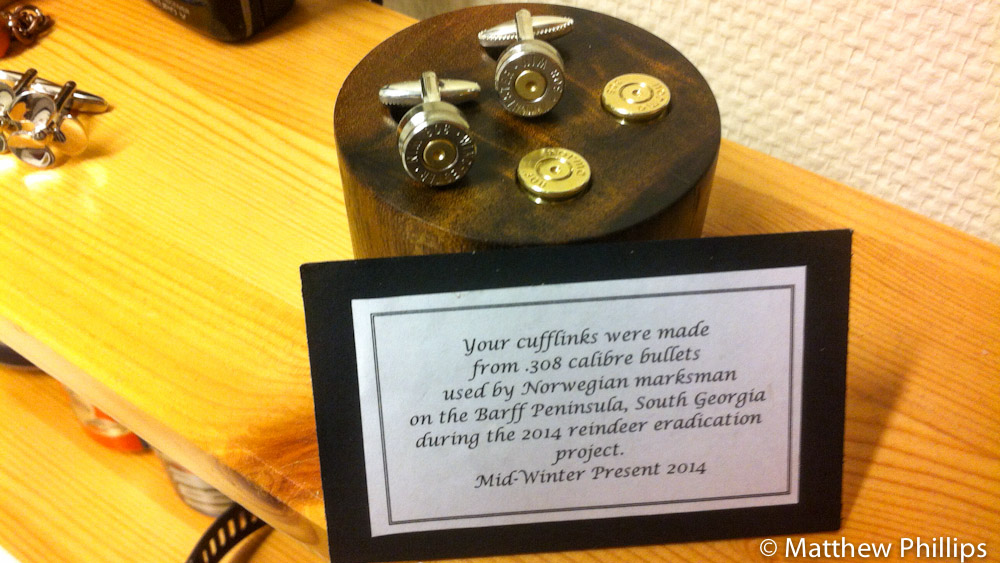 Simon pulled me out of the hat and made me some unique cufflinks. The card explains the story… 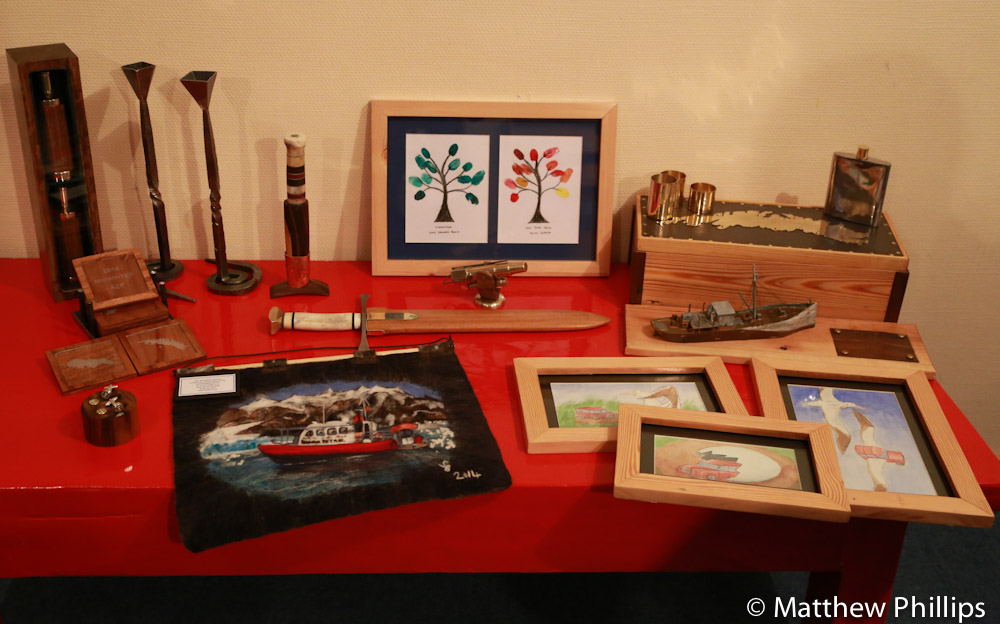 All the presents together. The 3 picture frames were made by Daniel for Matt and have a Land Rover/Albatross hybrid (Land Rovers are Matt’s favourite thing in the world) hatching from an Albatross egg, being taught how to fly and finally flying with parent. Going clockwise – The picture of the jet boat is felt work from Sarah to Tim and shows the Jet boat in front of the Nordenskold Glacier. Then Simon’s cuff-links to me. Jo made coasters from wood and etched glass showing Antarctica and the various islands Dickie has worked on. The tall wooden box has two brass bottles with a wooden sleeve inside that Tim made for Julie. Chris wasn’t left out. Matt (who had finished his present in May) made two candle holders from some steel bar he found. James made Jo a knife with a handle made from various woods – reindeer antler and elephant seal tooth. The blade in the middle is Dickie’s present to James. The handle is made from whale bone. Behind my/Joe’s harpoon is Julie’s present to Sarah, each leaf on the tree is a paint finger print from every winterer, and the frame is made from left over Discovery House wood. 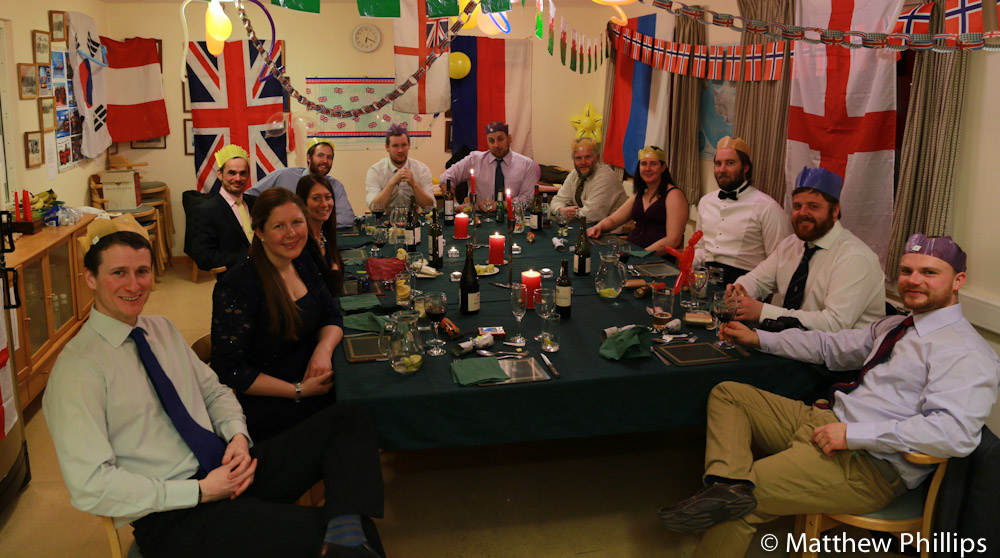 Mid-winter dinner…banquet is more accurate I think. There were a total of 7 courses , everyone mucks in by either making a course, helping to decorate, washing up and/or serving drinks. I would explain the obscure flags at the back but I don’t think I, or anyone else for that matter, can… they brighten up the room!? (Warning! if you are reading this and are coming south with BAS for a winter DO NOT READ the following sentences!) Once the feast was finished Dickie disappeared and returned with a sack full of parcels. These had been secretly put together by a family member back home (in my case my Mum – thanks Mum!) and brought down in November. First time winterers are kept in the dark as best as possible about this tradition. It didn’t unfold like that for me. My mum dropped the ball and called out one day in October while reading her emails…”Matthew…who’s Charlotte from BAS and why should I keep quiet about sending mid winter presents!?” To be fair she recovered well and said she’d send one with me that I could open on the day while still sending one in secret. 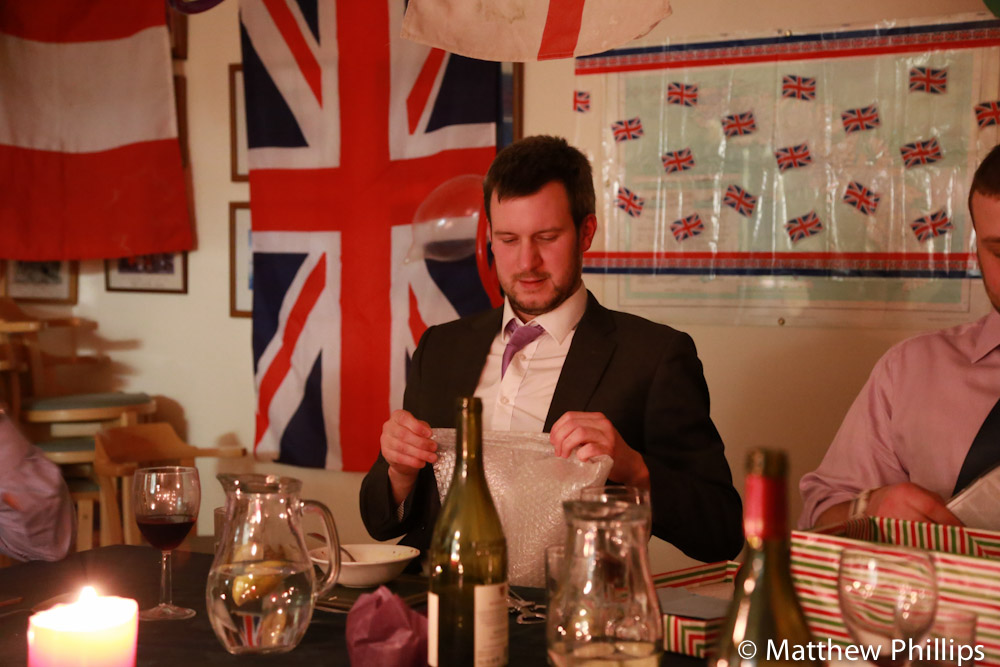 As with his Christmas presents James still finds the bubble wrap more interesting. 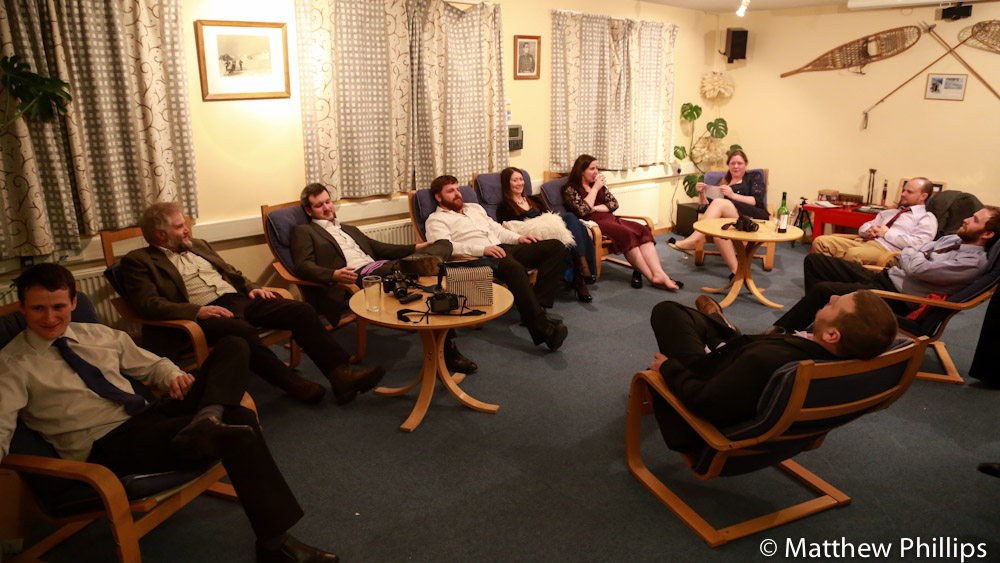 After the banquet everyone gathers in the bar to listen to the midwinter broadcast by the BBC world service. Close family and friends are contacted by BAS months in advance to send a message south. Each BAS base is allowed to choose a song and nominate a celebrity. As it’s the BBC you are best choosing someone connected to the BBC. We chose Peter Capaldi, the new Doctor Who, though we asked if he could do it as Malcolm Tucker from ‘The Thick Of It’. Unfortunately he was a no show, though other bases had the likes of Bill Bailey and Sir Ranulph Finnes read a short message. My personal message, read my mum, referred to me as ‘fat boy’ from the off, a thoughtful gesture thought up from friends Rory and Jordan back home – thanks guys, it got the biggest laugh of the night!  You can listen to the whole (30min) broadcast in the link below  – the KEP section is about 15 min in, Bill Bailey at 14 min. http://www.bbc.co.uk/programmes/p021bmjc 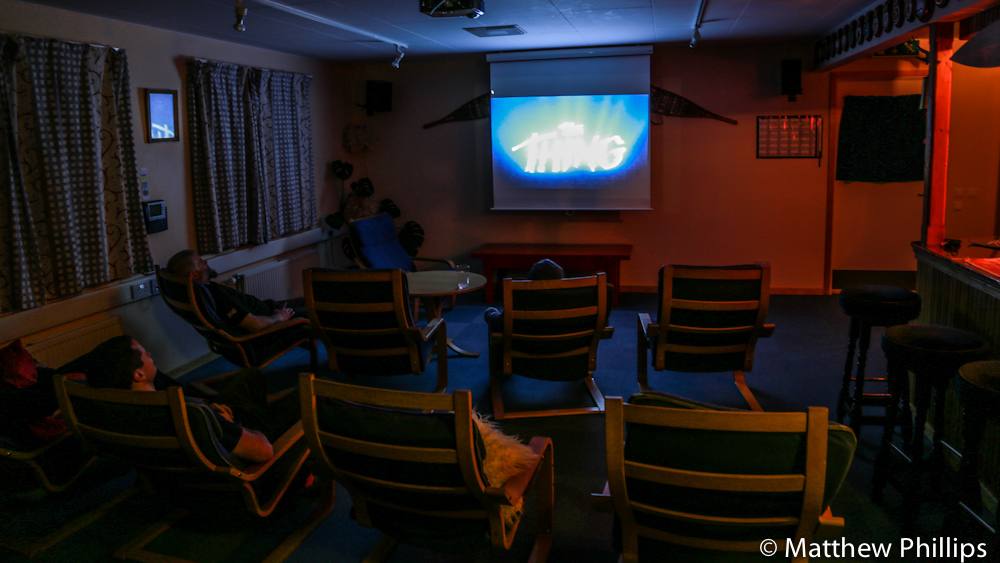 Mid winter is rounded off by watching John Carpenters ‘The Thing’ on the big screen in the bar. Pitty the poor soul who has to walk around base at midnight doing ‘lates’ that night! 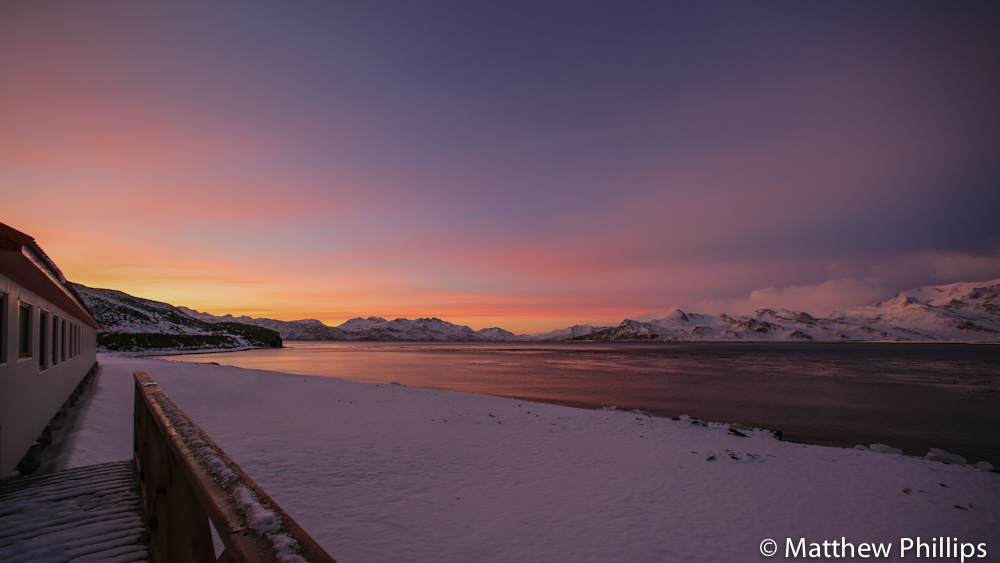 Early morning on June 30th as the sun gets tantalisingly close to breaking the horizon. Everyone was up early to give a send off to the Pharos. She would be carrying Joe, Tim (who’d completed his 8 months contract) and Simon and Sarah who had done their 8 of 12 months of the year on the Island. Jo would be handling all the Government work for 4-6 weeks until the Pharos would return with Pat. 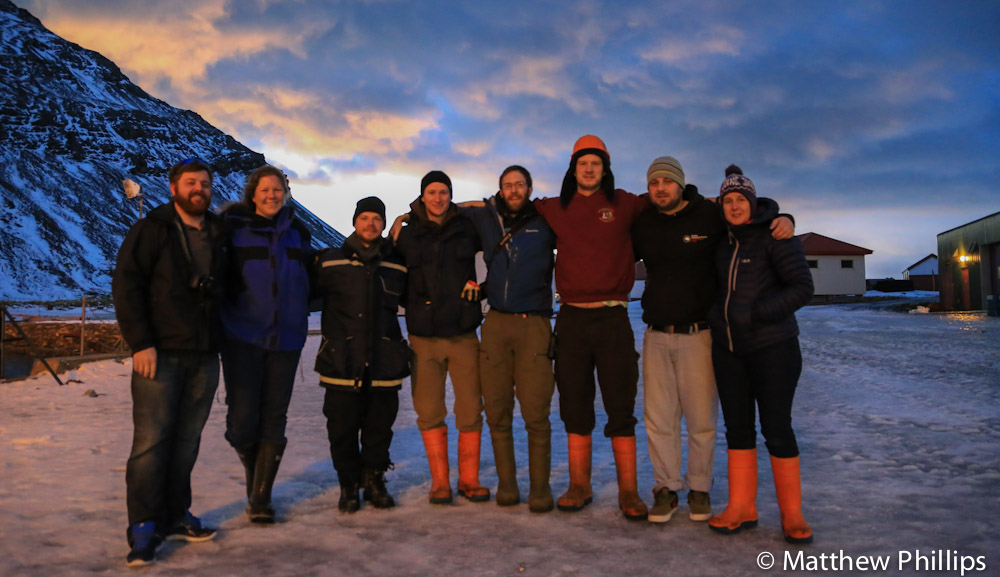 One last get-together before the breaking of the fellowship. Tim and Joe (Frodo and Sam) heading back to the UK while James would join one of the fishing ships in the area. 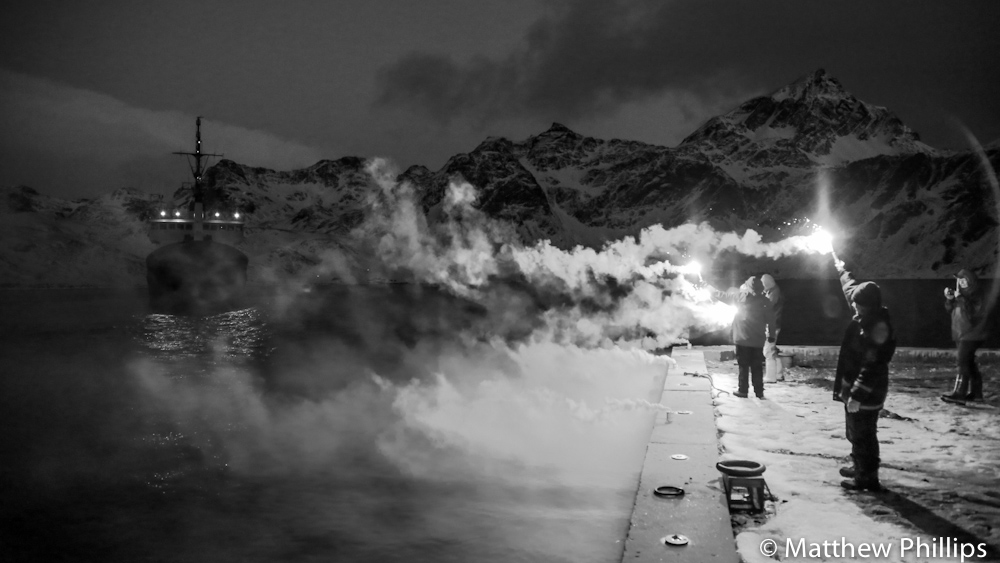 The Pharos pulls away from the wharf with the remaining winterers giving them a send of, making good use of out of date flares. 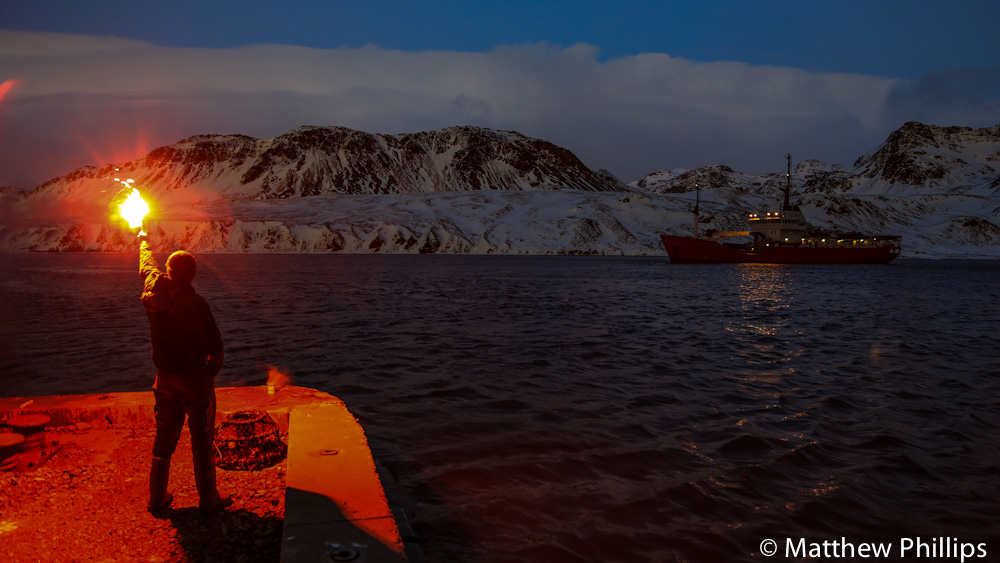 And then there were 7…

Ok so keeping the writing to a minimum is proving quite hard, though the mid-winter thing deserves some explanation. If I’m missing something or you have a question leave a comment below and I’ll do my best to answer it in the next post. I should have the next post ready in a week or so, hopefully with a video or two! It’s looking like monthly posts after that.