It’s been a while! I thought a wee blog post from Greenland wouldn’t go amiss… 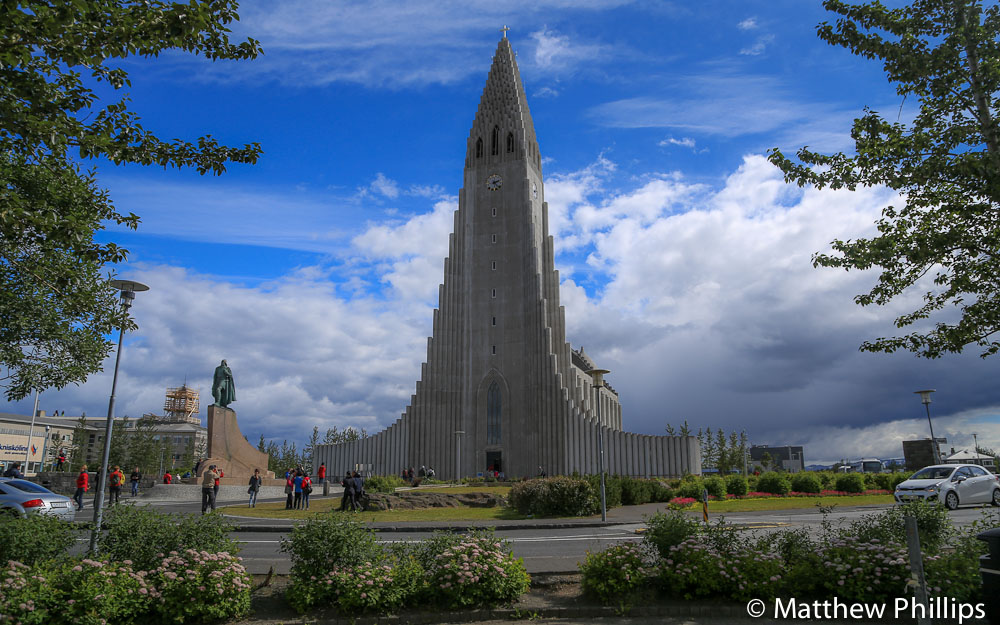 There aren’t any direct flights to east Greenland from the UK so you have to get a connecting flight in Iceland. In 2013 I didn’t get much more than a few hours in Iceland but this time I managed a full day either side of Greenland, which has only left me feeling I need to spend more time in Iceland. This is the old church in the centre of Reykjavik, can’t help but think it could be a interesting climb up the outside. 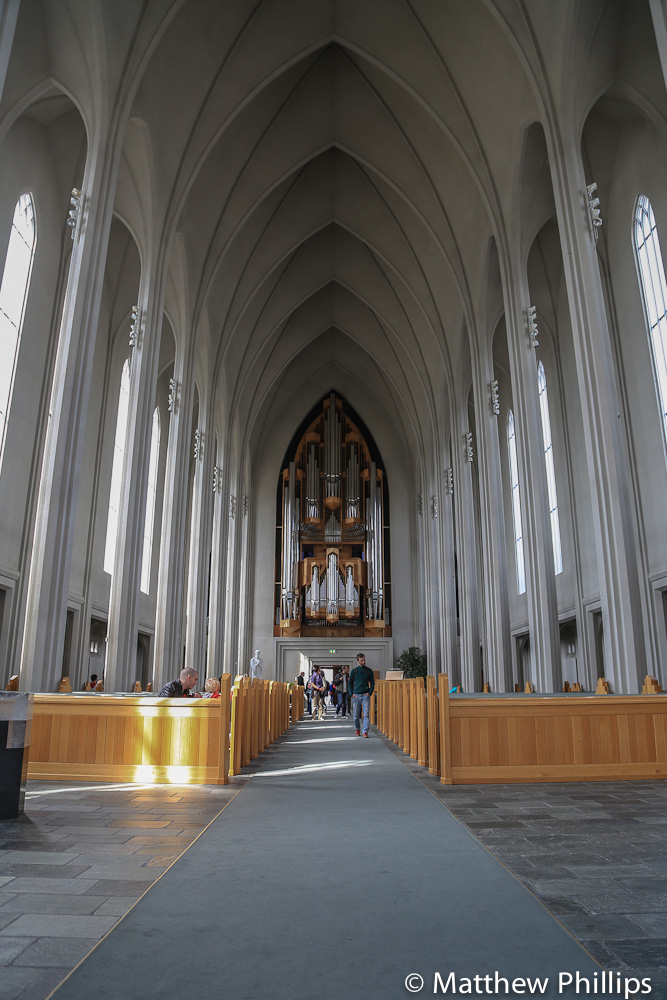 It’s fairly impressive on the inside as well. 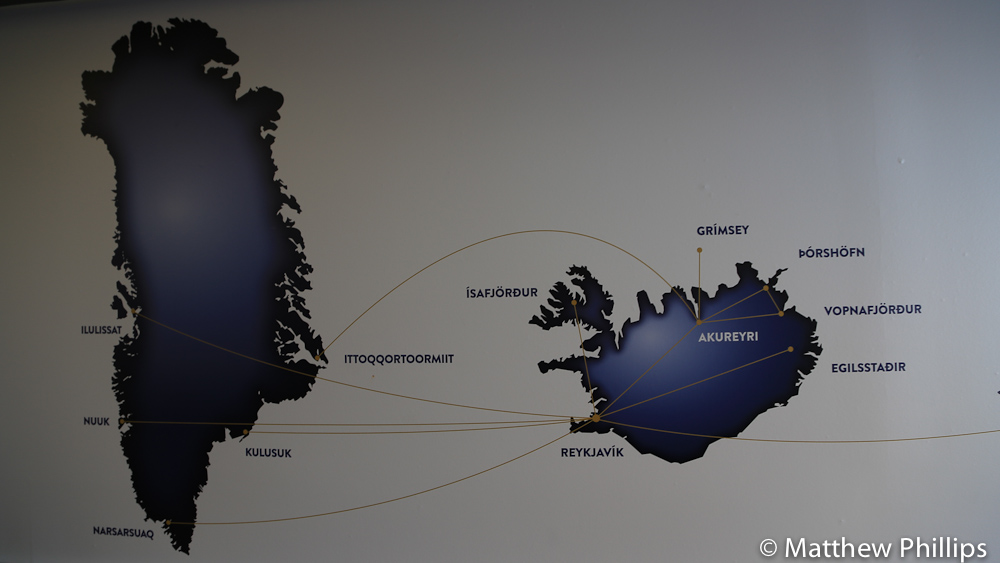 Ok, so I flew into Reykjavik from Edinburgh and then took an internal flight to Akureyri before heading on to Constable Point which is actually just north of the village of Ittoqqortoormitt (good luck pronouncing that one). 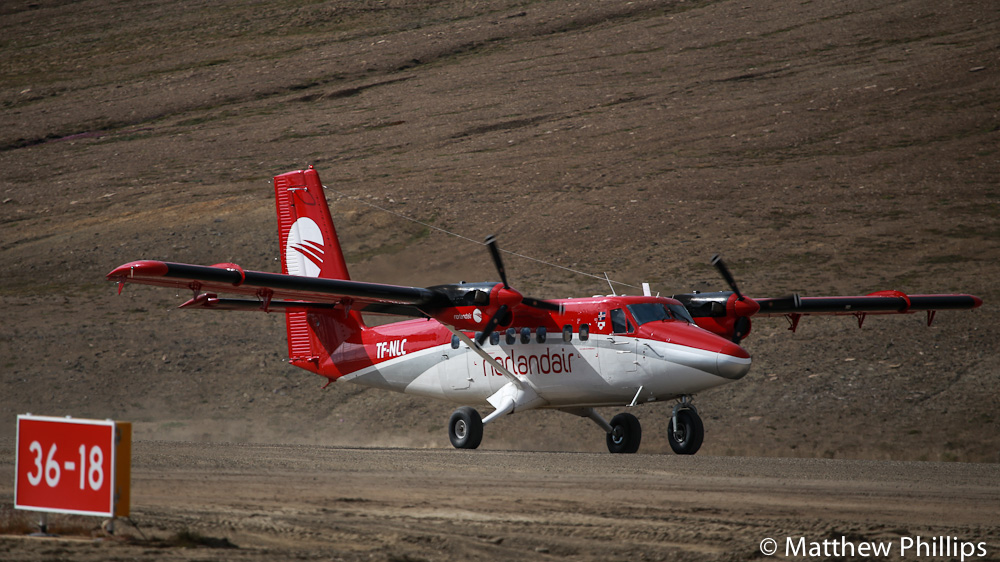 Twin Otters are common sights in the Arctic and Antarctic. I’d never flown on one before the Akureyri to Constable Point flight so it felt a little over due. They often have skis fitted to the wheels so they can land on ice etc. 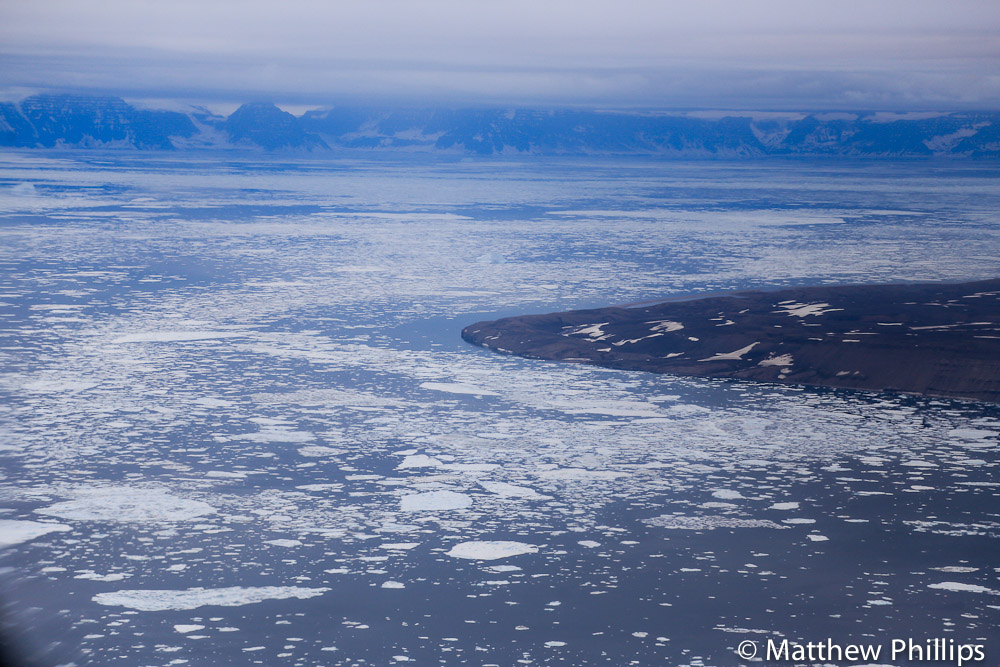 Scoresby Sund (sound) Fjord is the largest in the world. It’s about 50km wide and about 150km long, it then continues for over 100km into the inner fjords. There was a lot of ice this year that didn’t want to disappear – sure you’ll hear about 2015 being a good year for sea ice in the next year or two. As the title suggests I crossed 124 of the 180 degrees of latitude in 14 days, leaving the Antarctic for the Arctic. 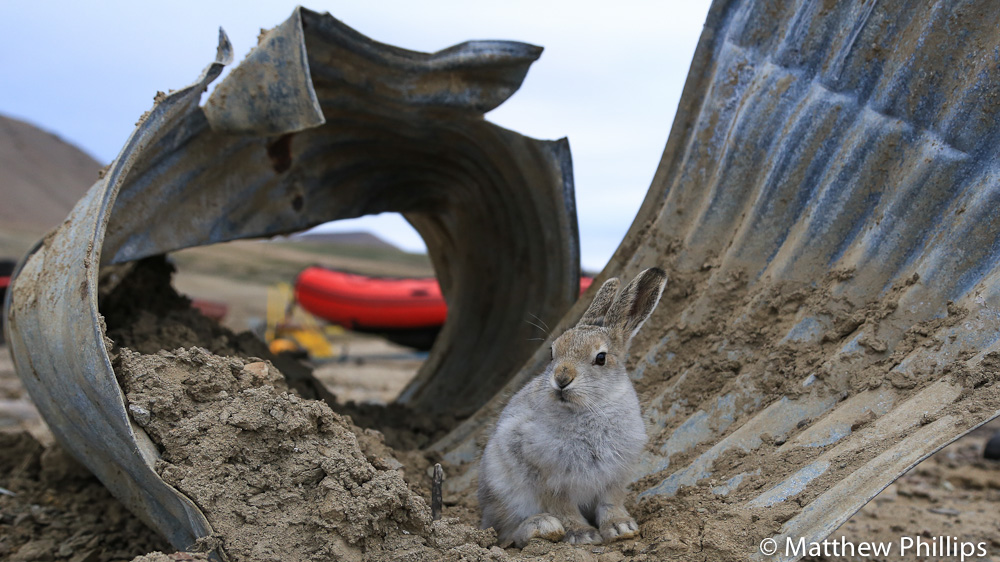 While the Arctic and Antarctic are similar in lots of ways a few things struck me, one being the attitude to the environment. The Antarctic is heavily protected and litter is almost non-existent. Thats not the case in the Arctic (I’m not having a go at the Greenlanders here) as the locals don’t put much thought into the environment. This shot is taken down where we keep the boats, about 1km south of the airport, which is also the airport dump. There is no way the international community would allow this in the Antarctic. Don’t get me wrong I love the Arctic but it’s one of the differences – other than the whole penguin/polar bear thing! 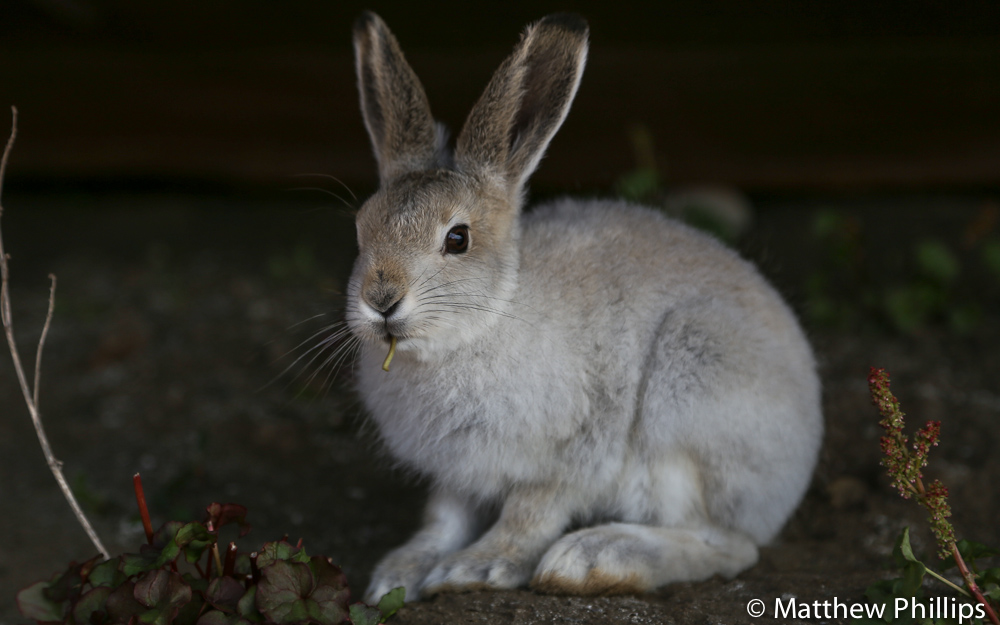 This little fella (Arctic hare) was down at the boats and wasn’t too shy. He’s about the size of a rabbit but when fully grown they are about the size of a big domestic cat. A newborn/young hare is called a leveret (I’ll admit I had to look that one up) . 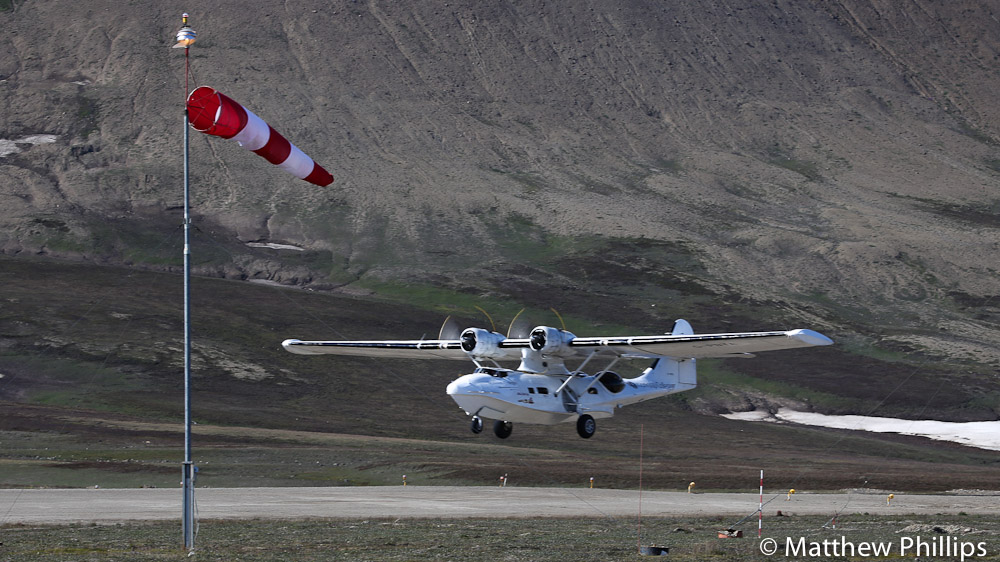 These guys made a bit of a splash in the news a couple of months ago. It’s a PBY-5A Catalina flying boat, one of about 12 that still fly. Worksop College, UK, used it to drop their students off and pick them up for their expedition into the mountains beyond Scoresby Sund. 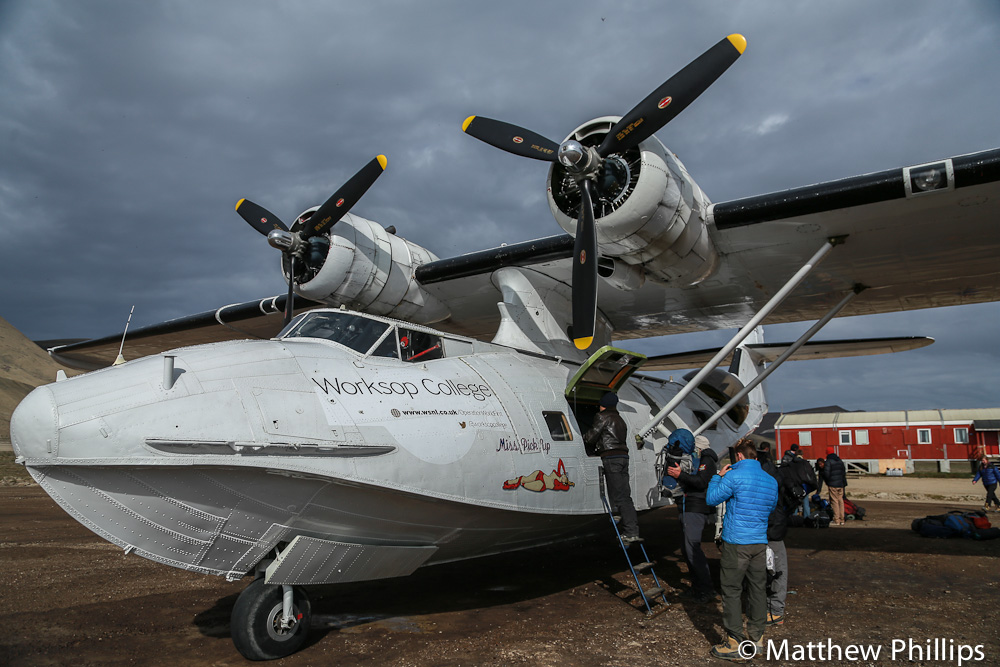 Worksop College made a bit of a splash in the UK news before leaving the UK in this Catalina flying boat. You can just see the ‘blisters’ towards the tale of the plane in the photo. Originally machine-gun emplacements during World War II, the blisters were added for safari wildlife viewing. The plane typically flies quite low and has a cruising speed of about 120 knots. 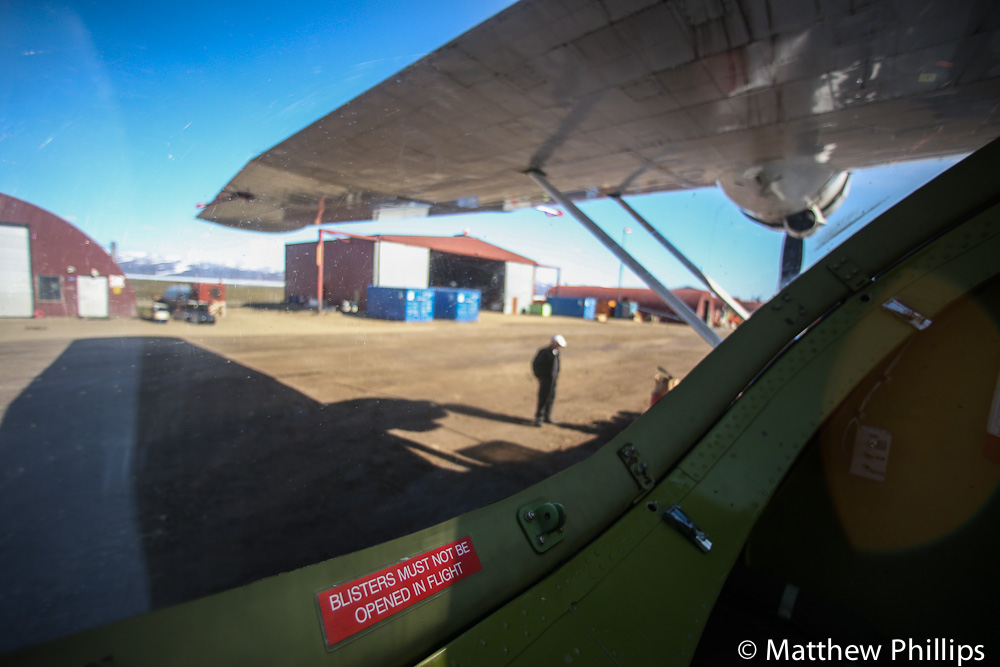 This is the view from inside the blister. You can see down the length of the plane giving some fairly impressive inflight views I imagine. 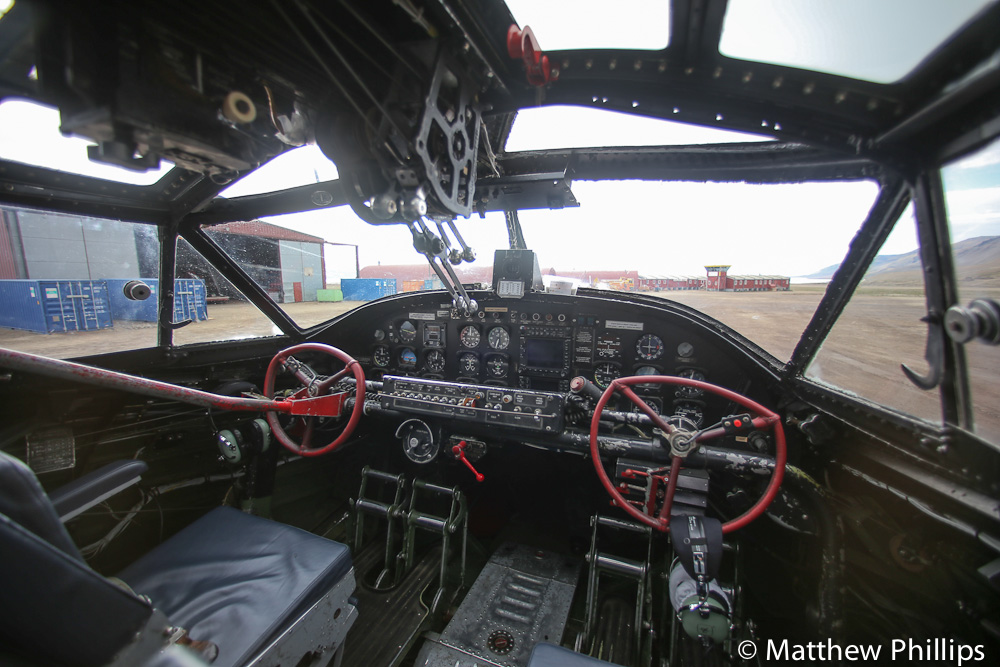 Not sure what I was expecting but the original controls are all still there, very cool! 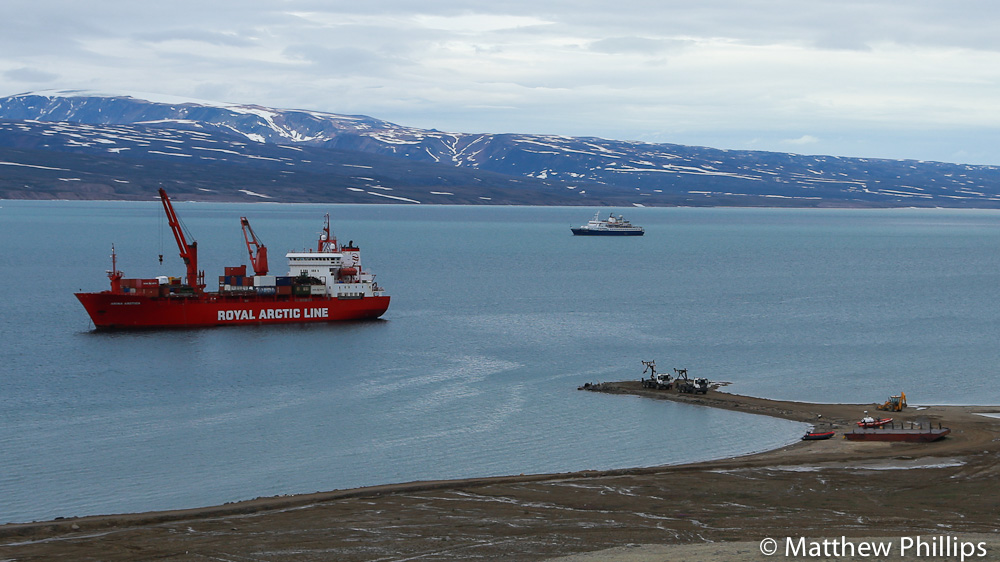 The supply ship comes in once a year (a little like the BAS bases) and resupplies the airport with frozen food, toiletries etc. The ship in the back ground is the Quark Expeditions ship Sea Adventurer who I know from KEP! Small world, especially in the polar regions! 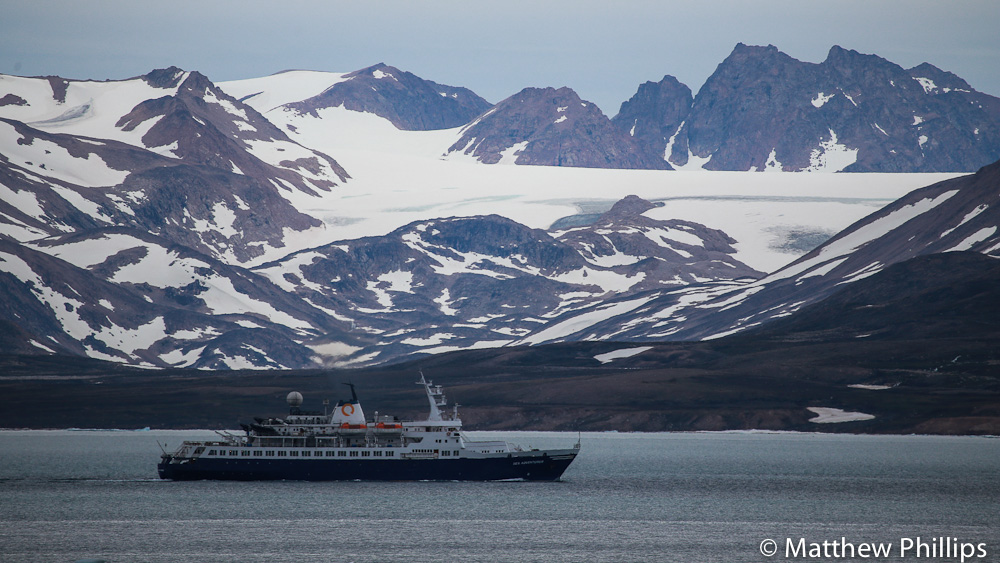 There she is leaving the Fjord with Liverpool land in the background. 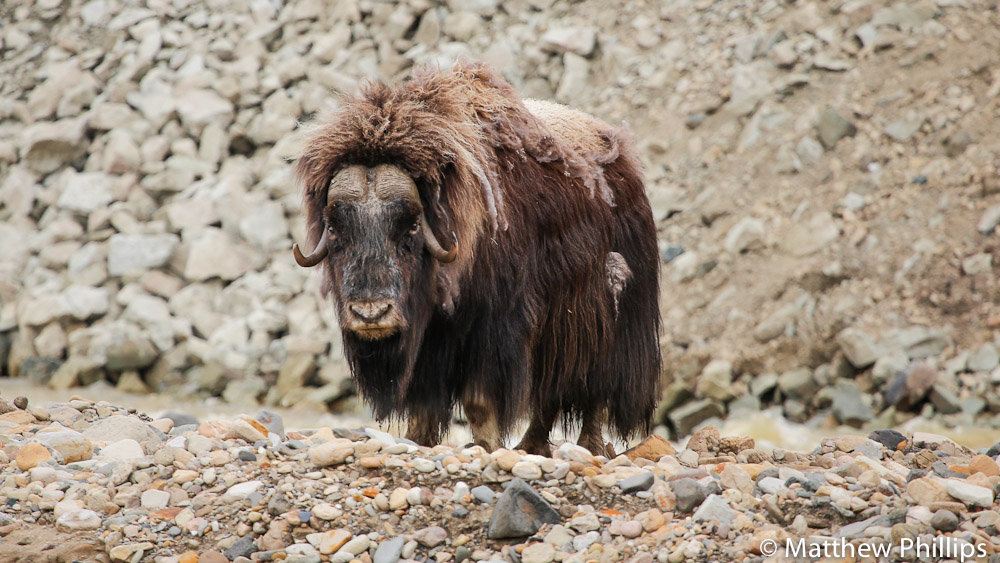 Musk oxen are about the size of a big cow, with a little more armour and insulation! They aren’t particularly afraid of humans, probably because they know who would win the fight! 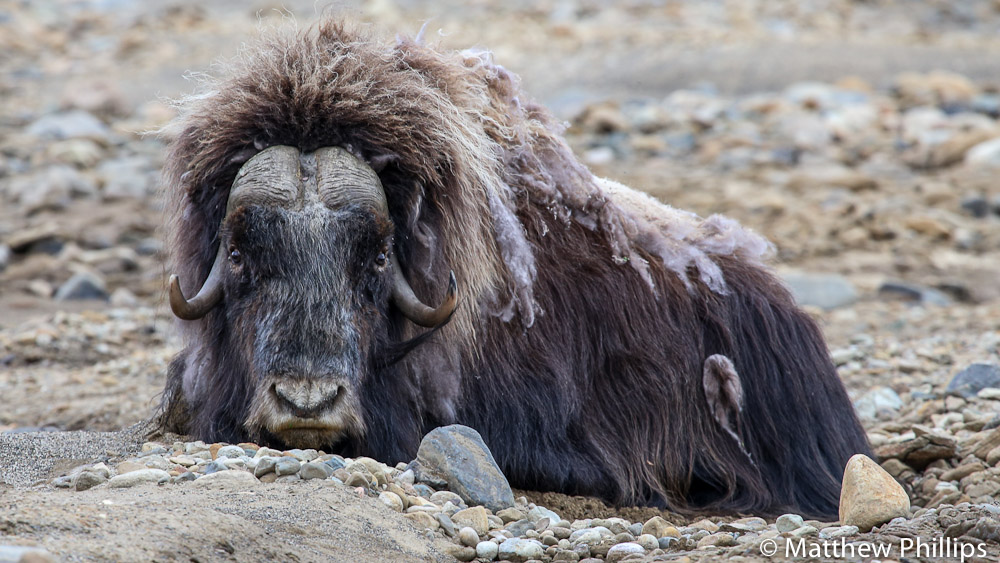 This one became quite relaxed in my company, but kept a close eye on me though. You can see the remnants of his winter coat on his back. 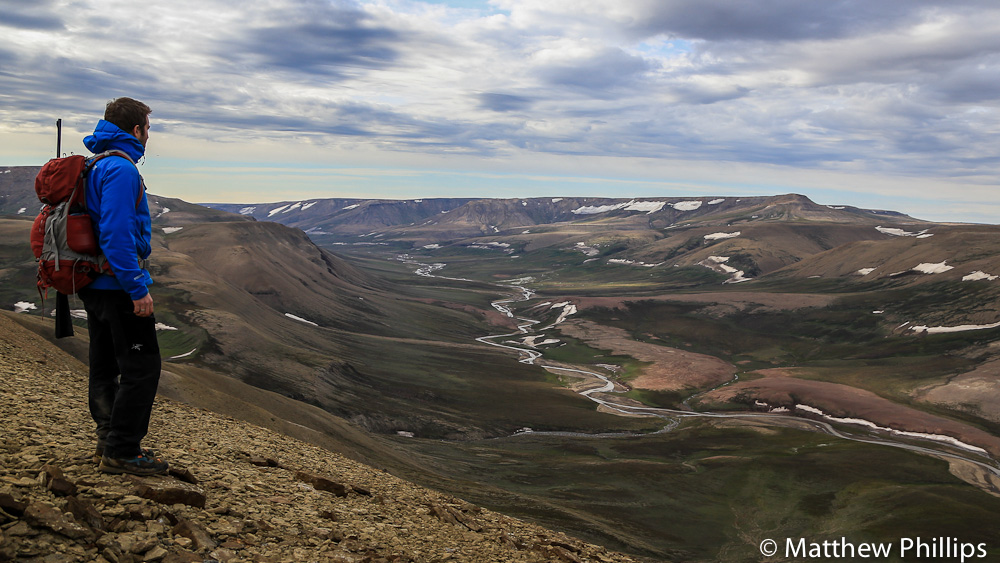 I’d been contacted about making a film/timelapse for a travel company who wanted a sunset shot from each of the 24 time zones. I managed to get one on the last night, not because I left it to the last minute but the weather did! I headed up the hill behind the airport to get the shot over the valley here. Thats the trusty rifle strapped to my bag there. 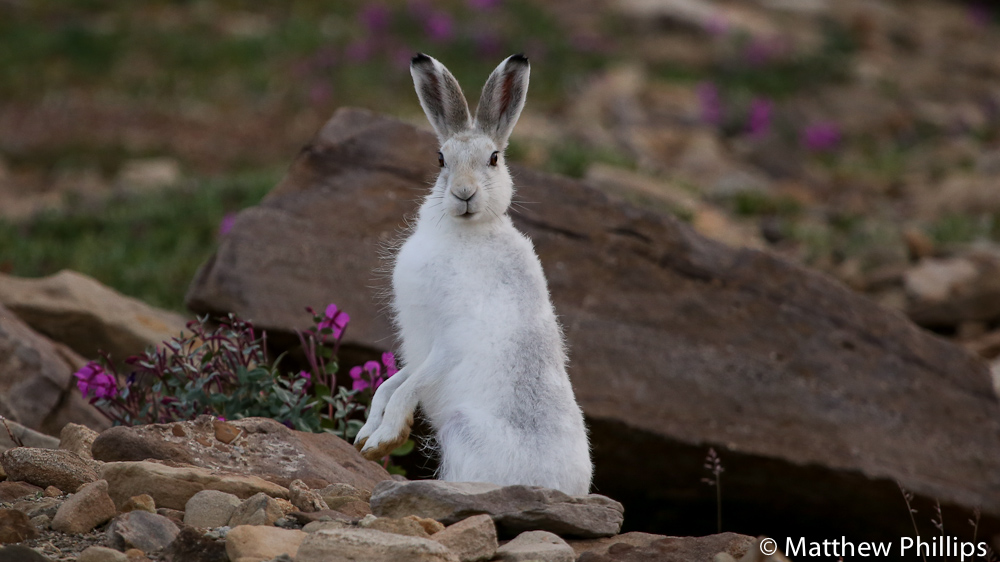 There you go, a fully grown Arctic hare. 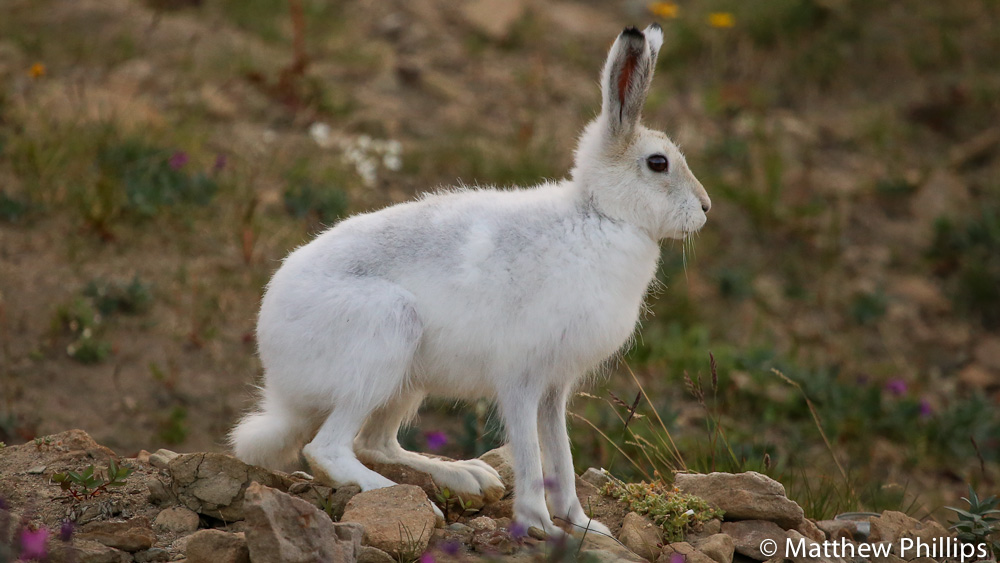 Hares have bigger ears, hind legs and are about twice the size of rabbits. They also don’t burrow like rabbits do, making Bugs Bunny something of a fraud! 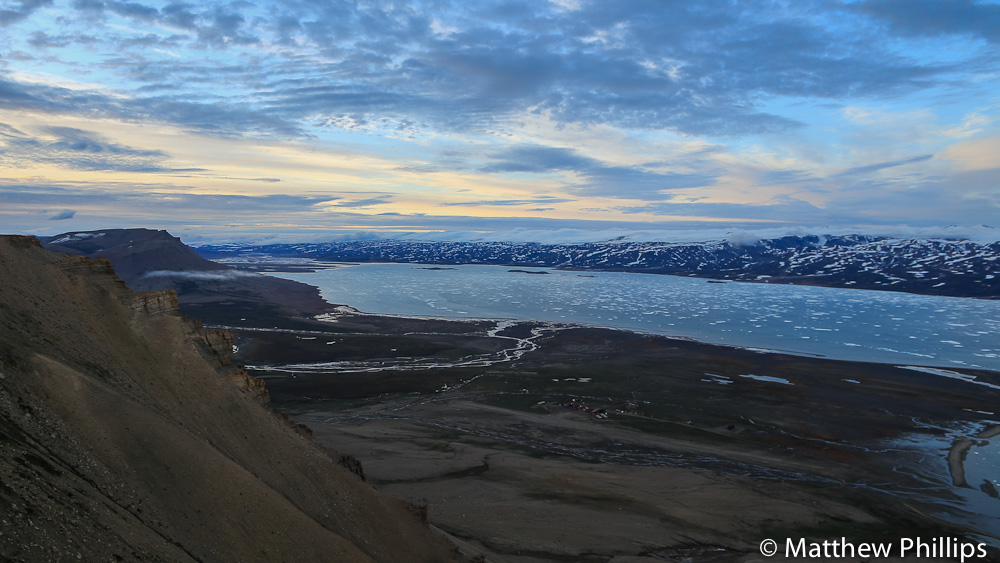 The other hill behind the airport isn’t as welcoming as the one I took the time-lapse on. I had to scramble up a few hundred metres of scree and loose choosy rock to get up, rather than take the long way round. This is looking north about 11pm at night with the airport runway just visible down below. 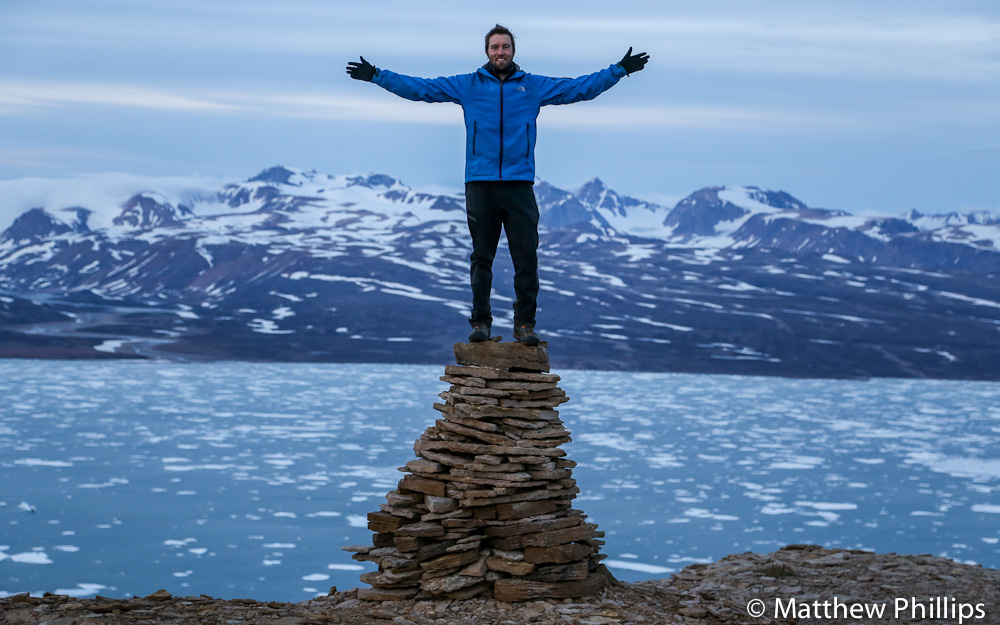 A couple of years ago, while on an expedition, we climbed a couple of peaks we were hoping would be ‘virgin’ but found a small cairn on top of one and a huge one on another. I expected to find this one but it brought back some memories from two years before (there is a blog post about that trip if you go back far enough or click ‘Greenland 2013’ on the right of the page). 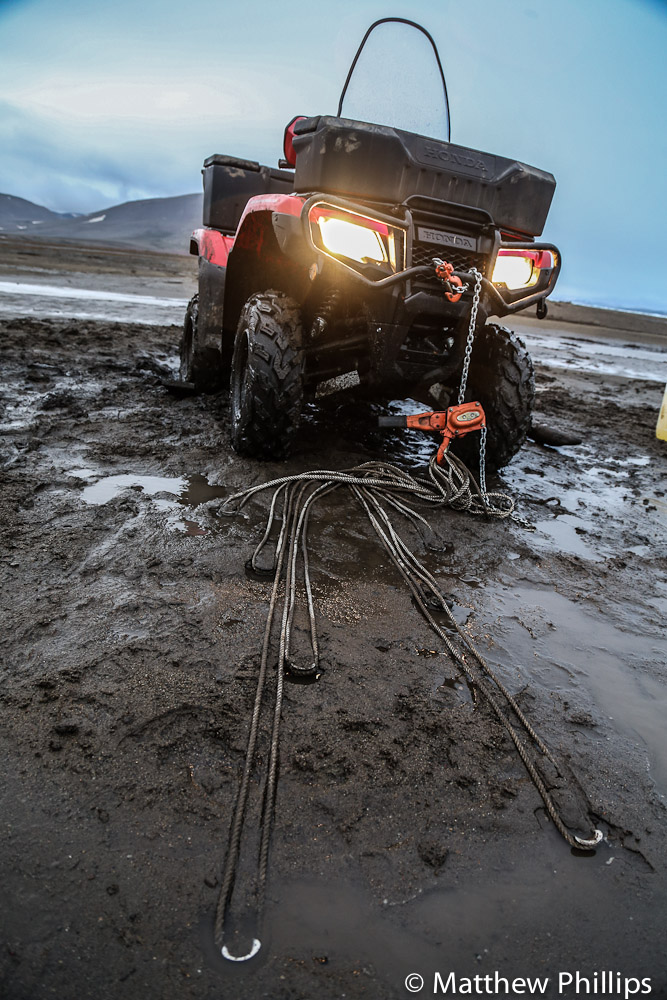 We had a new toy this year, it didn’t take me long to get it stuck! It was 4am when we were picking up the West Lancashire Scouts by boat. I’d taken the quad down to help getting their kit back to base. After making things worse for a while I went all out and put half a dozen snow pegs in the sand, equalised them and then used a small winch to tension it as much as the pegs would handle. Then putting her in a high gear I managed to get her out. Phew! 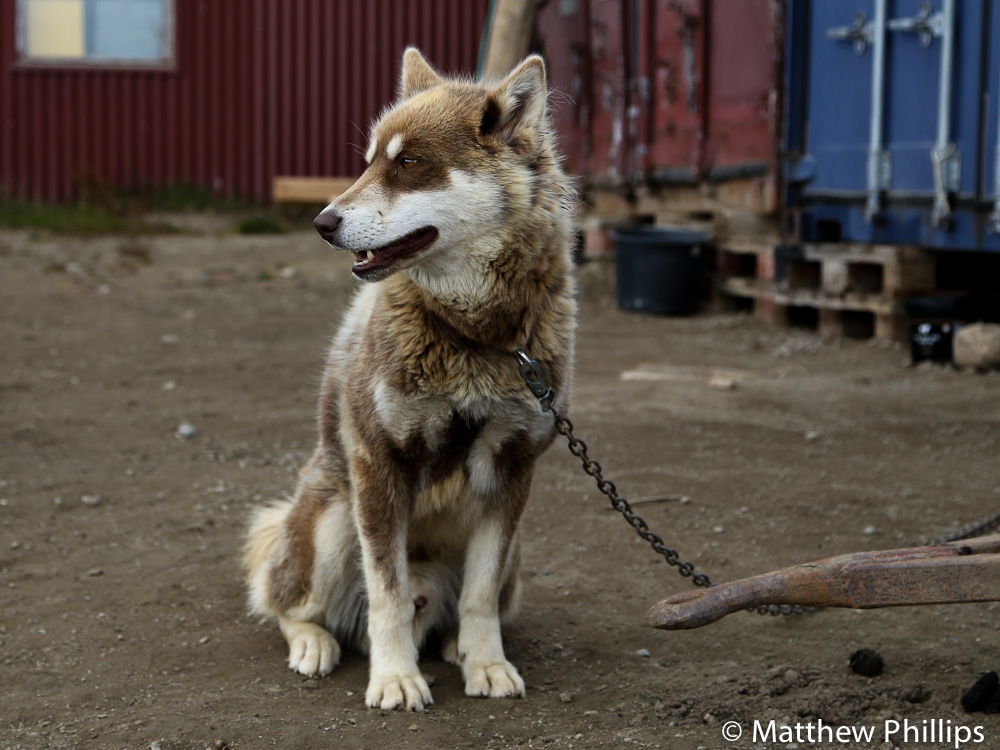 A group of French scientists who were on the far side of Liverpool Land had Husky with them for protection, the smell helps keep polar bears at bay. 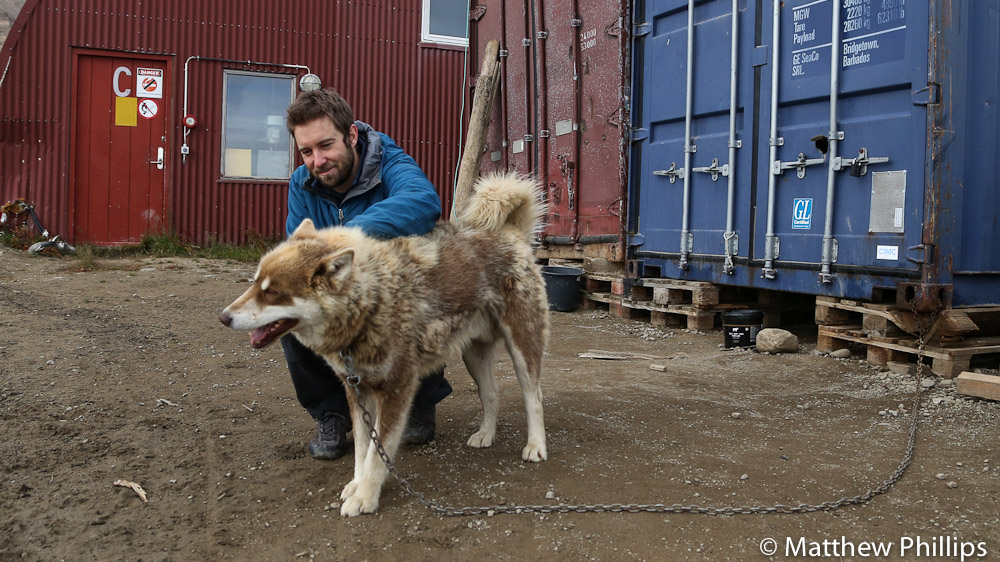 It was nice to hang about with a relaxed animal (unlike the fur seals down south). I think he enjoyed the attention as well.

I now have a couple of months before heading south again early November. I’ll update the blog once or twice before then!