March has been a funny old month, looking back it’s been a long one. As I type this the RRS Ernest Shackleton is on her way north towards us for ‘last call’. The last few weeks have been mainly occupied with packing up outgoing cargo and waste in anticipation of her arrival.

This month the government asked to visit all the older huts to survey them, they are working out whether to repair or replace the older ones. That meant a couple of great days out in the boats covering most of the boating limit and dropping into some of the less visited areas. 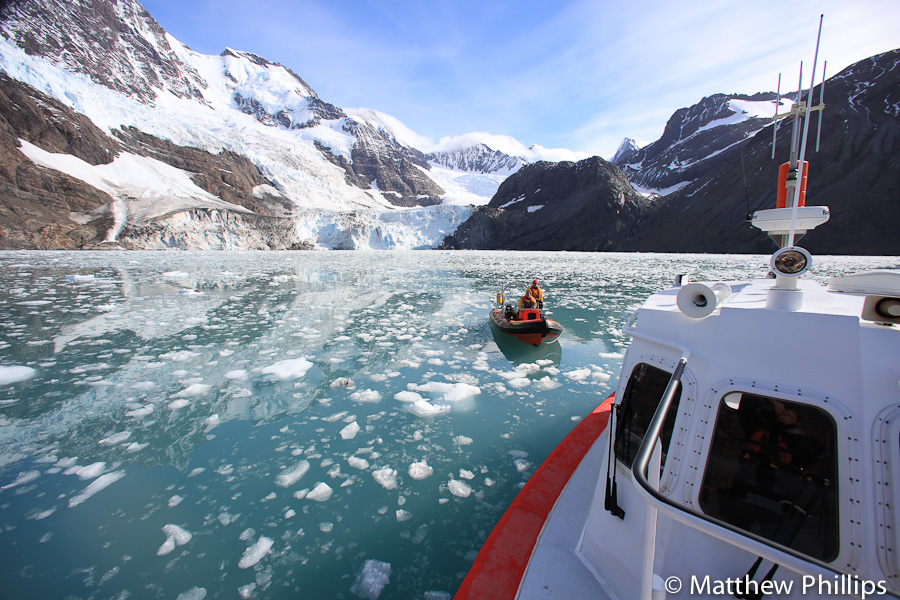 Lewis and Tim follow the jet boat as it leaves Mercer Bay. 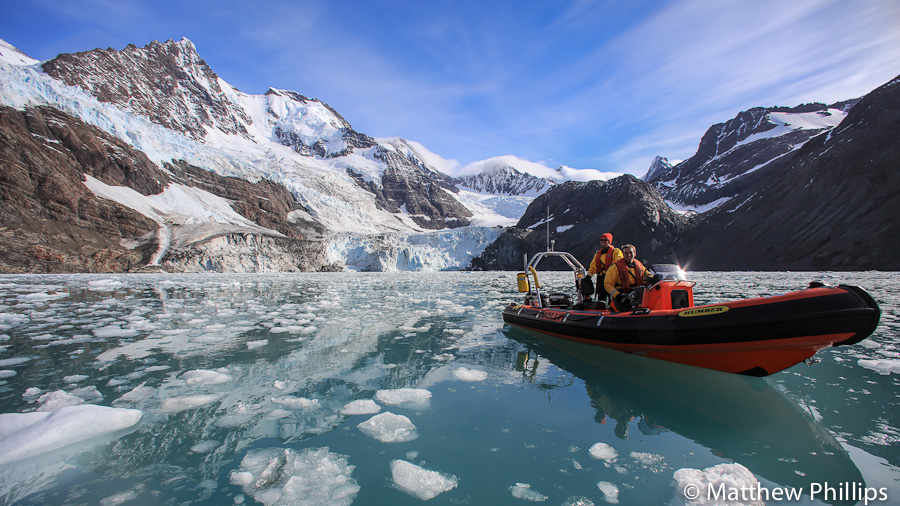 Mercer Bay is accessed from Cumberland West Bay. It’s not often we get the opportunity to get in there but it’s well worth it – a real amphitheatre of ice and rock. 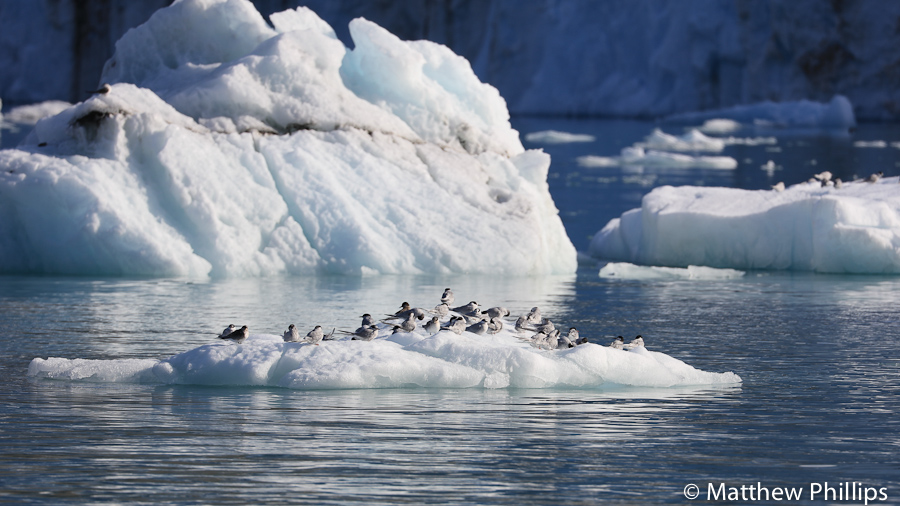 Up at the front of the Neumayer Glacier there are hundreds, maybe over a thousand, terns at the moment. I’m not sure if the apparent increase in numbers is a result of the rat eradication. 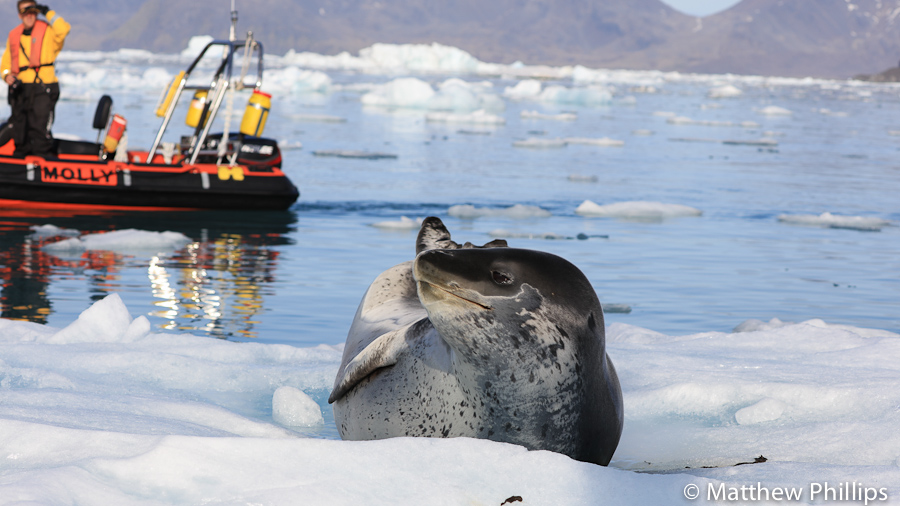 Just after leaving the front of the glacier we spotted a leopard seal on some ice, my first sighting of the year. 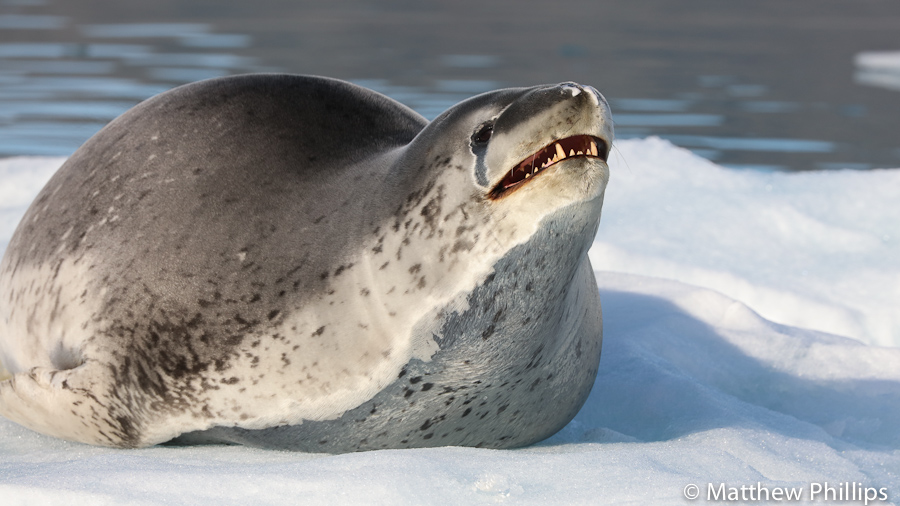 My best guess it was about 2.5m so about 1.5 short of a fully grown female but it was much chunkier than other ones I’ve seen. Not sure if might have been pregnant or not. 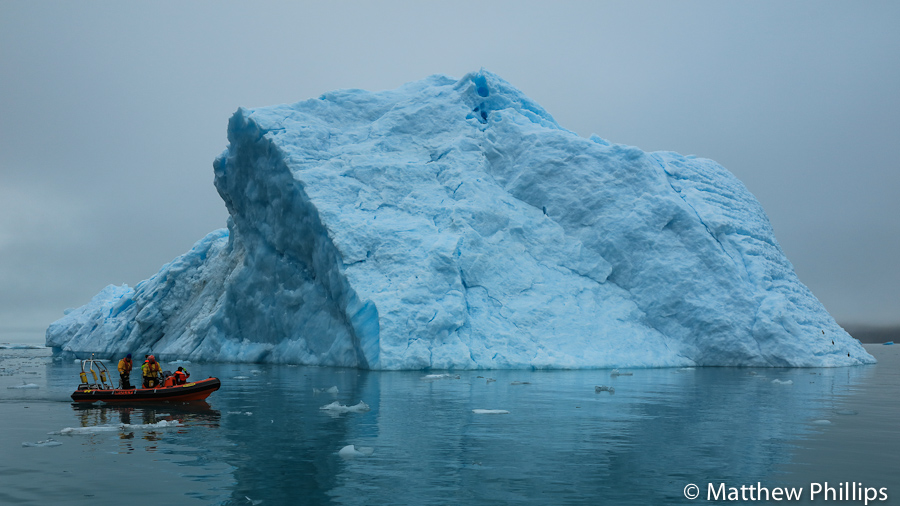 This berg was grounded on submerged terminal moraine left by the glacier when at it’s furthest extent – some 8-10km from where it is now! It’s probably the biggest chunk of ice I’ve seen come off any of the glaciers in our travel area. 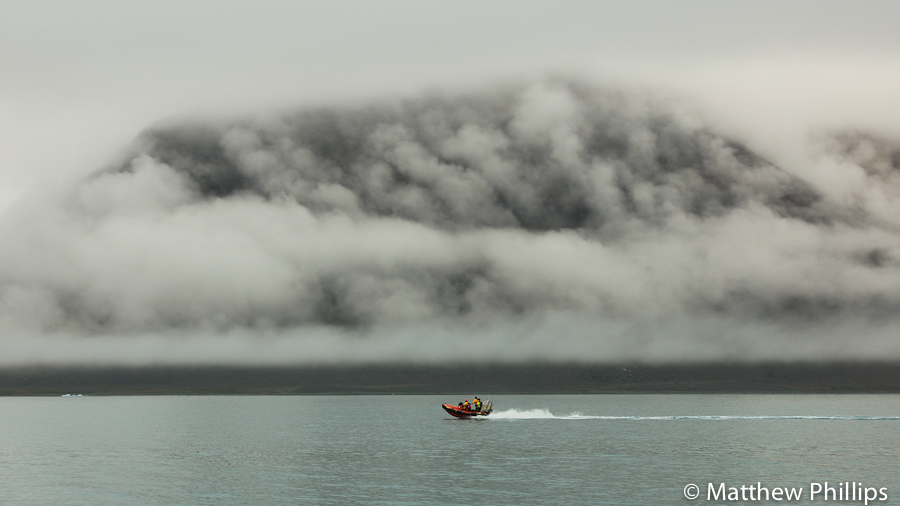 I think I’ve made the odd comment about weather this year (yes I know, moaning Brit!) but I’m sure there has been more wind this summer than the previous two put together. It’s made for some interesting cloud action as well. 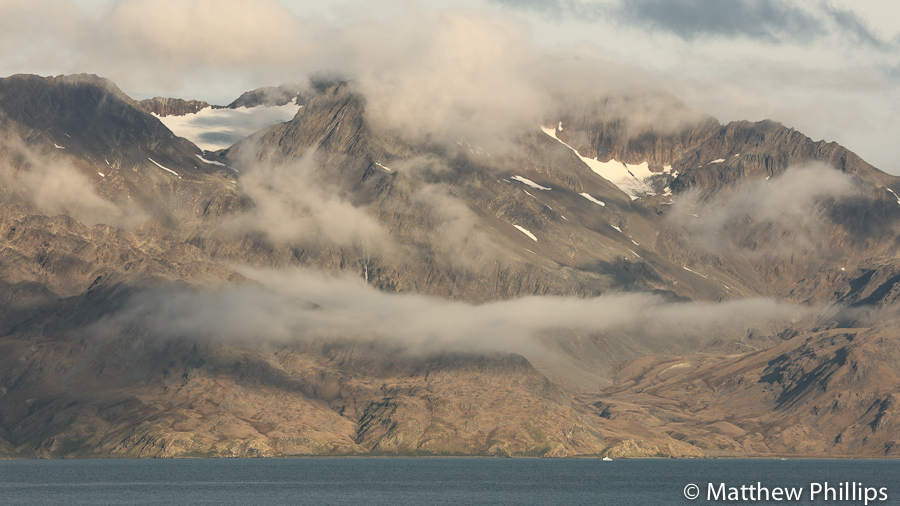 Looking over towards the Barff Peninsula from base, you can just see the ice-cap between the peaks. 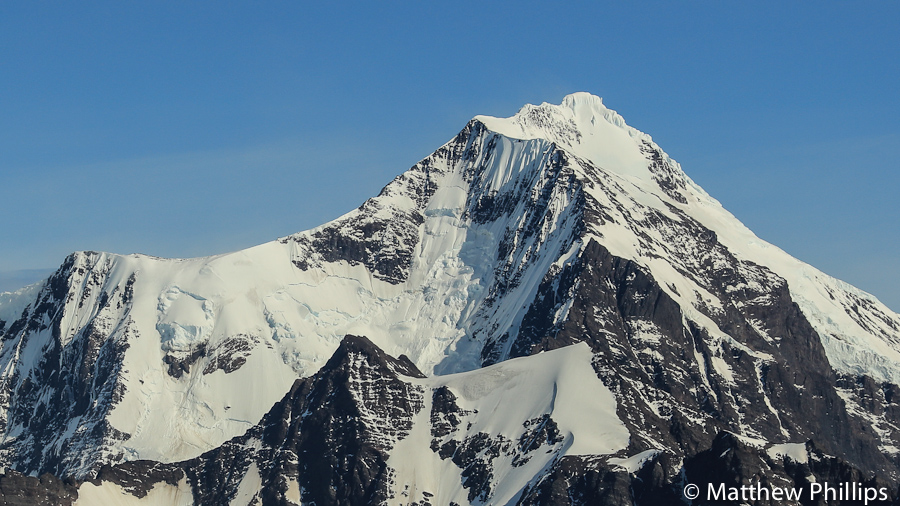 Unfortunately Katie’s time on SG came to an end early in the month. Fortunately her last weekend provided some decent weather so we went up Mt Hodges. Looking over towards Mt Sugartop we noticed a sinister warning sign. Look at the ice face on the left of the shot… there’s a 300m (?) long skull face! 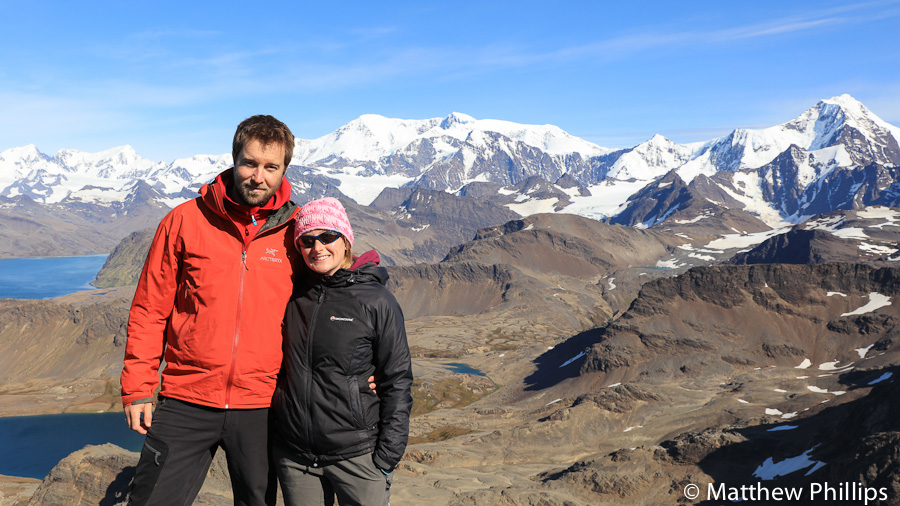 What a place to live! 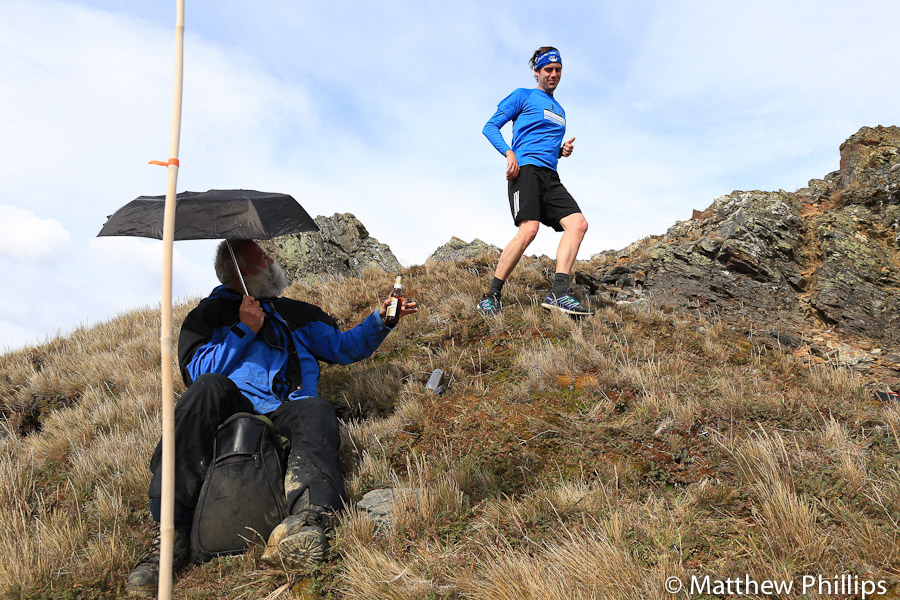 The second weekend of the month saw the annual SG half-marathon take place. I didn’t run this year as I’ve retired (absolutely nothing to do with being unfit) so I walked most of the course and appointed myself as official race photographer. The race starts at base then goes round Gull Lake before heading up and over Brown Mountain. Paul Cousens (Cuz), our facilities engineer, volunteered to be marshal at the top of the descent down the mountain. He said that an umpire with an umbrella and beer were ‘two great ways off pissing the runners off!’. 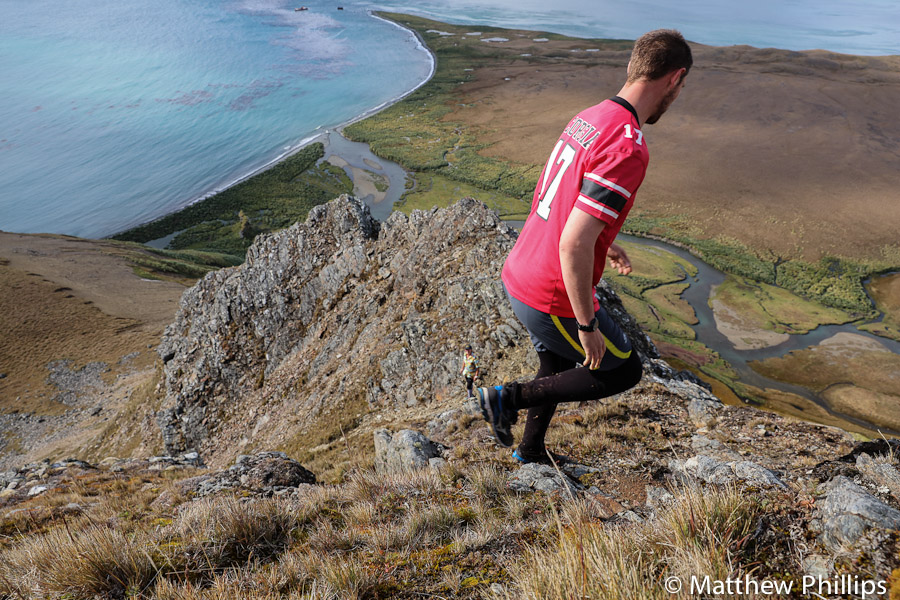 Robbie (electrician) at the top of the descent of the mountain. There can’t be many mountain races in the world with a descent like this. 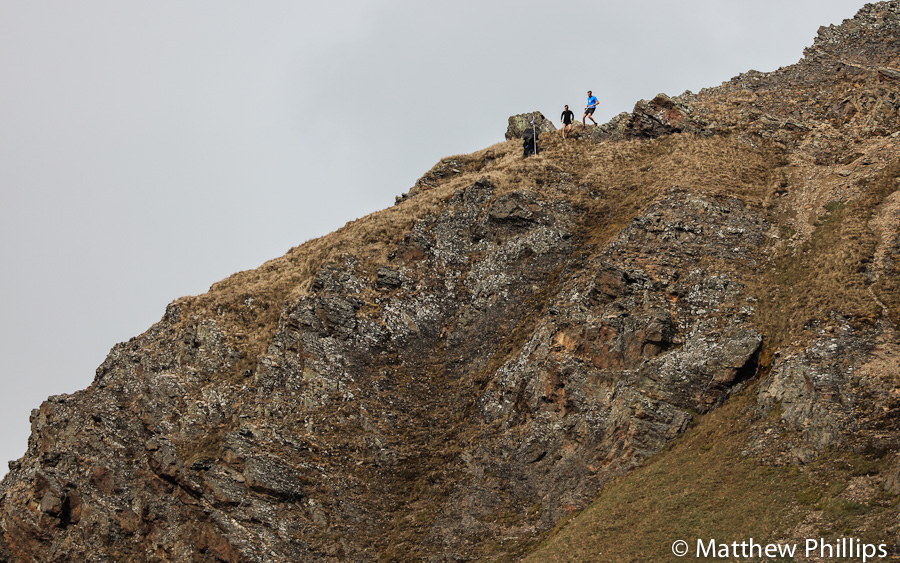 Walkers and runners were staggered an hour apart so after I’d descended the mountain I was able to look back to catch Simon and Tim (covering Doc in Becky’s absence) at the top of the descent. 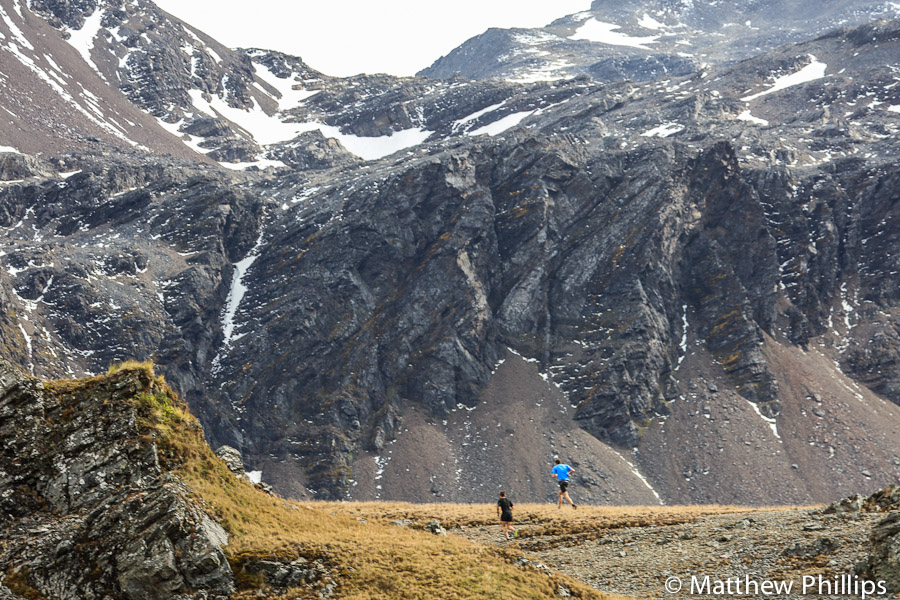 Simon went into the race as defending champ so was the person to beat. The two of them pushed each other, constantly swapping from lead to follow. Simon created a several hundred meter lead in the second half of the race, which Tim couldn’t close down. Simon finished in 1hr 52 and Tim came in a couple of minutes after. 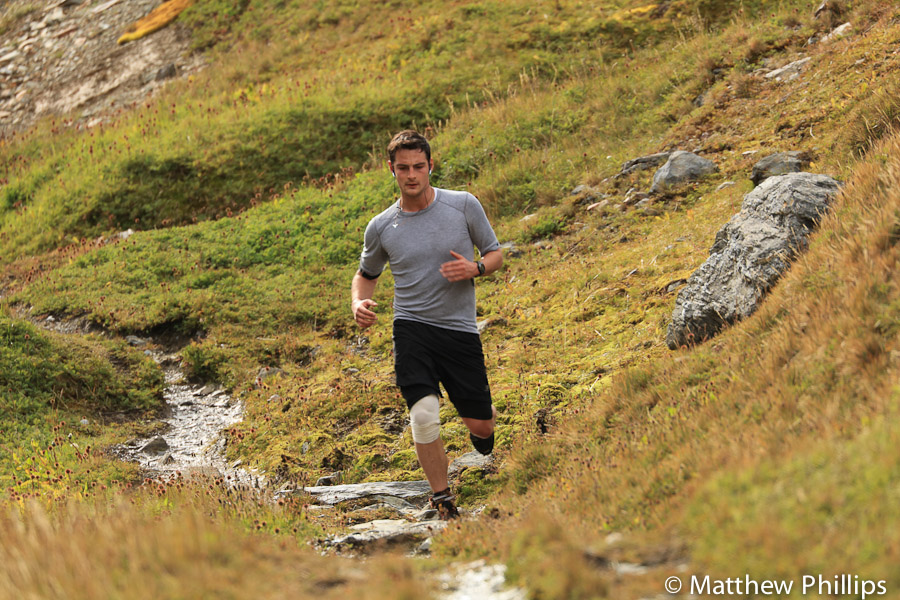 Jamie (higher predator scientist or beaker – if you don’t get the reference look up ‘beaker muppets’ in Google) storming down from Bore Valley, only a couple of kilometres from the end. Despite entering the running/walking category he finished in 2hr 7min – a very respectable running time. 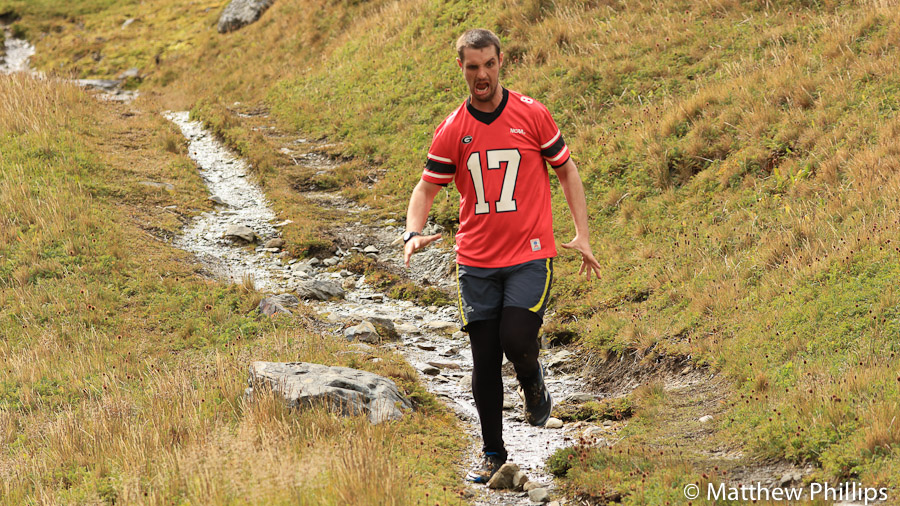 I, like most people, will correct my posture and even speed up at the sight of a camera when running to make myself look stronger, faster etc. The psychology of that might be interesting to some but Robbie did exactly the opposite when he saw me… 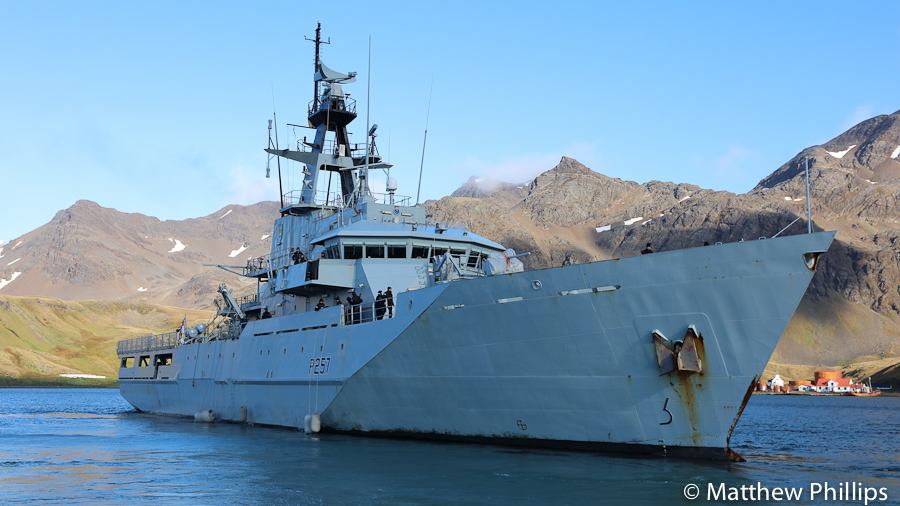 HMS Clyde stopped by for a visit and to help us trial run the new Major Incident Plan (MIP). Should a vessel end up in trouble, and forced to abandon ship, we would have to provide food and shelter until help arrives. There is a folder with various jobs, roles and tasks that need to be carried out should we find ourselves in that situation. So the idea was to use Clyde crew to act as guinea pigs to test the plan.

The scenario was a fishing ship had an engine fire and the Captain ordered the crew to abandon ship. So we launched a jet boat to collect them from the life-rafts (in reality we picked them up from Grytviken to save them deploying their life-rafts). We then brought them back to the boatshed where they could be identified, counted etc and triage any wounded. 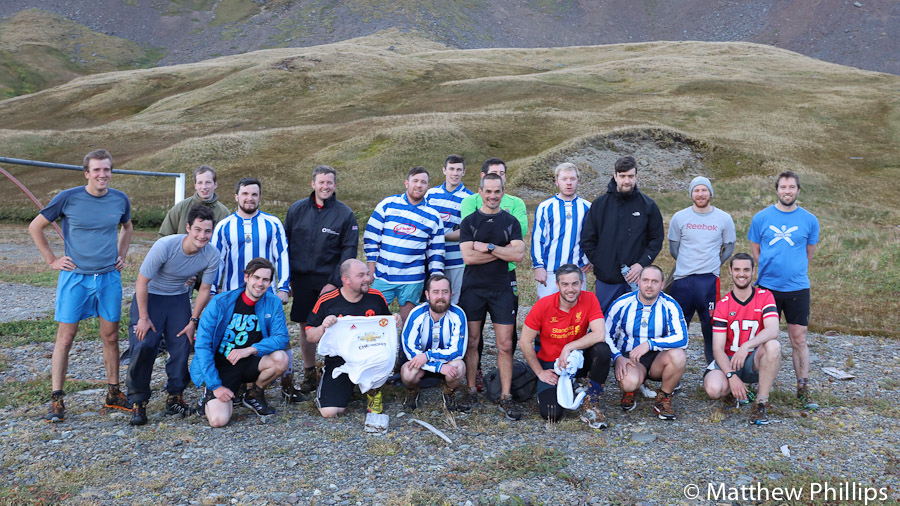 As they were around for a few days we organised a game of football with them. KEP has never beaten a Clyde team. However we were confident going into this one as our record going into this one was W-1 D-1 L-0. We took an early lead and held them off in the second half despite the wind picking up and making it difficult to get out of the boggy half of the pitch. We held them at bay until the last 5min, when, somewhat dubiously our goalkeeper (a Clyde crewman who was given to us to make up numbers) spilled the ball right in front of their striker who slotted the equaliser home. The heartache didn’t finish there, they scored a winner with literally the last kick of the ball. It’s hard not to mention the blatant foul throw that started the move that resulted in them scoring. But I’m not bitter about it, not in the least. 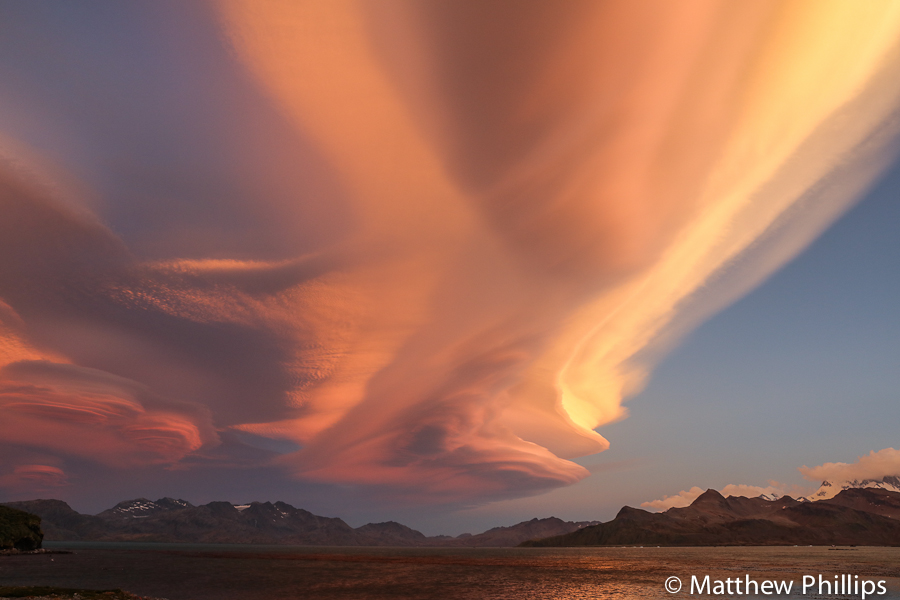 Anyone who has spent time on South Georgia will be familiar with lenticular clouds, they are a regular feature here. We haven’t had many this year (yes, I’m moaning about the weather again) but we did have one very impressive display towards the end of the month.

By the end of next month we will be down from 27 to 11 people on the island and we should have our Doctor back!

Remember you can subscribe to the blogs, it’s free! I try to publish a new one every month. You can subscribe by using the ‘contact/subscribe’ tab at the top of the page. If you want to opt-out later you can easily do it on the same page by re-entering your email in the ‘unsubscribe’ box. Please put something in the ‘Location’ or ‘interests’ box as you may look like a spammer if you don’t.