Once more unto the breach…

Well, it’s taken a little longer than I would have liked to get a blog post out. The last couple of months in the UK ended up being a whirlwind of seemingly endless driving around the country thanks to BAS pre-deployment training and house buying! Anyway, if you’ve been wondering where the blog posts have been – now you have my excuses!

My fourth season in a row at KEP (equaling the current ‘boatie’ record) started in similar fashion to the previous ones. Flight from RAF Brize Norton via Ascension Island to the Falkland Islands before joining the fishery patrol vessel Pharos SG. I covered some of that in last year’s blog if you are interested – http://matthewphillipsphotography.com/2015/12/ 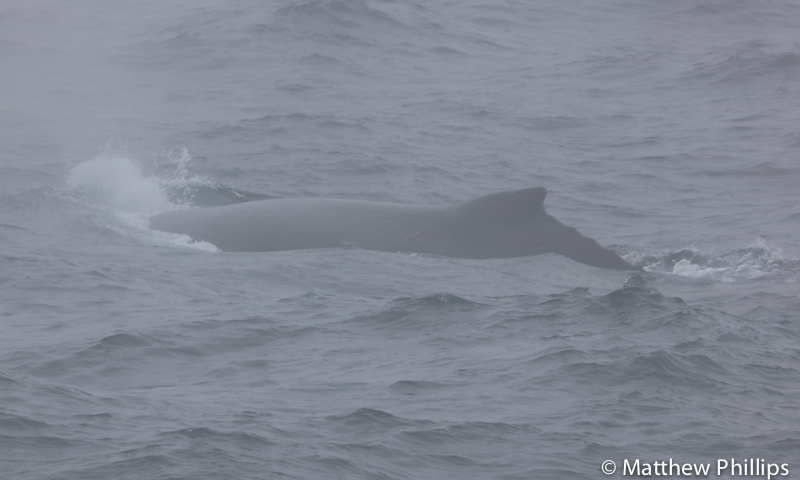 I was hoping for some good weather close to Shag Rocks (about 200 miles west of South Georgia) so I might get some whale photos. Unfortunately the last three days of the four on-board were spent in fairly lousy visibility. I did manage to get a glimpse of a Sei whale. 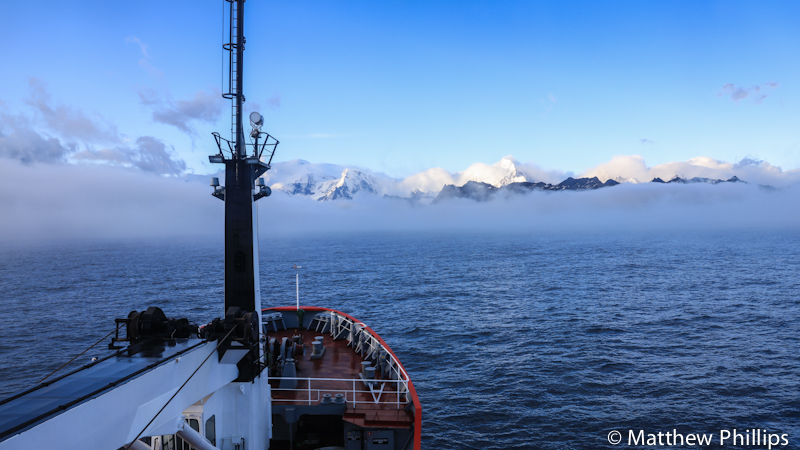 We were about 20 miles north of Cumberland Bay at 5am the morning we arrived. I got up to find the fog was still about but a change in fortune gave us a fairly dramatic clearing and view of the higher peaks. 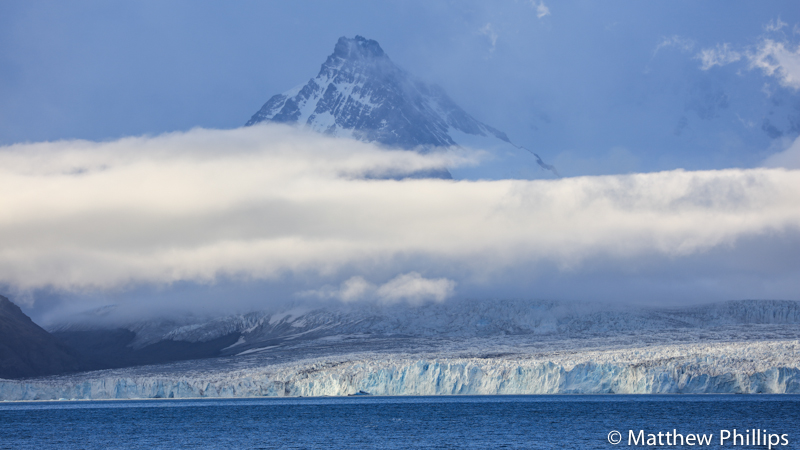 The view down to the Neumayer glacier was particularly impressive. 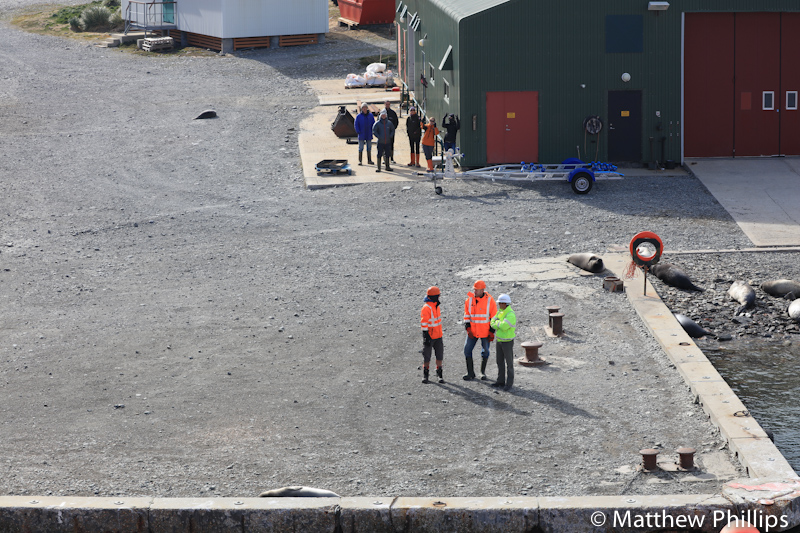 The residents came out to welcome us in. 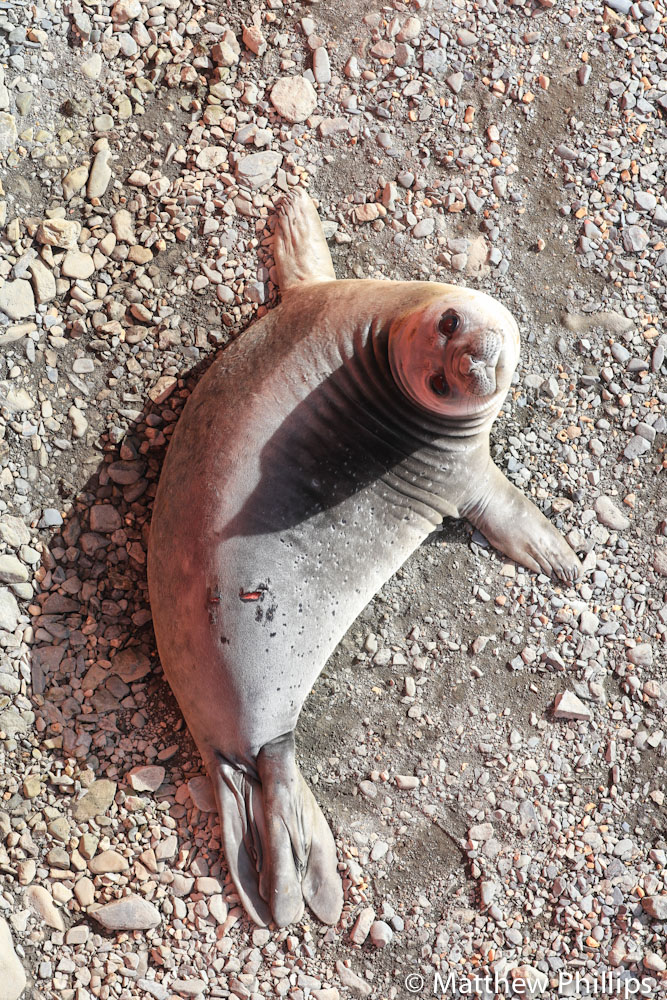 The elephant seal pups were littered around the place, this one was directly below the bridge wing of the Pharos on the wharf (hence the red tinge reflecting off the hull). 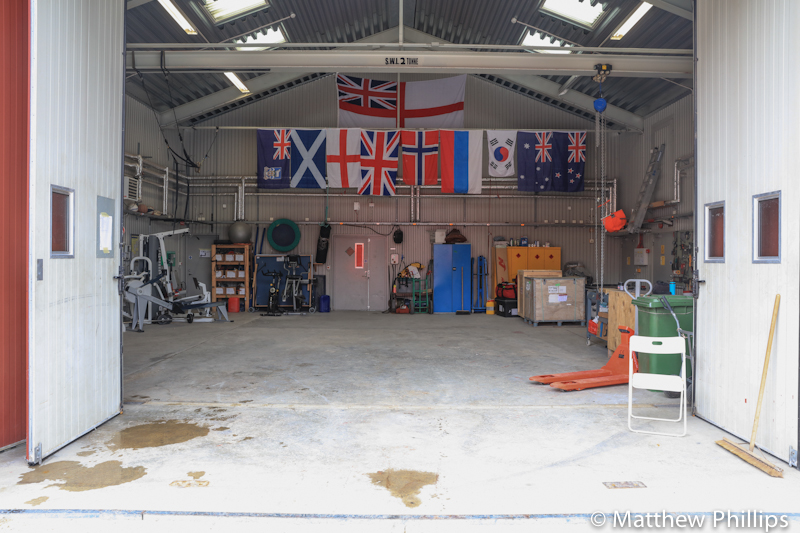 The first week of December was also time for the RSS Ernest Shackleton to come in and deliver all the cargo for the year. The boatshed was used as the delivery depot for everything as it came off. So, this is before… 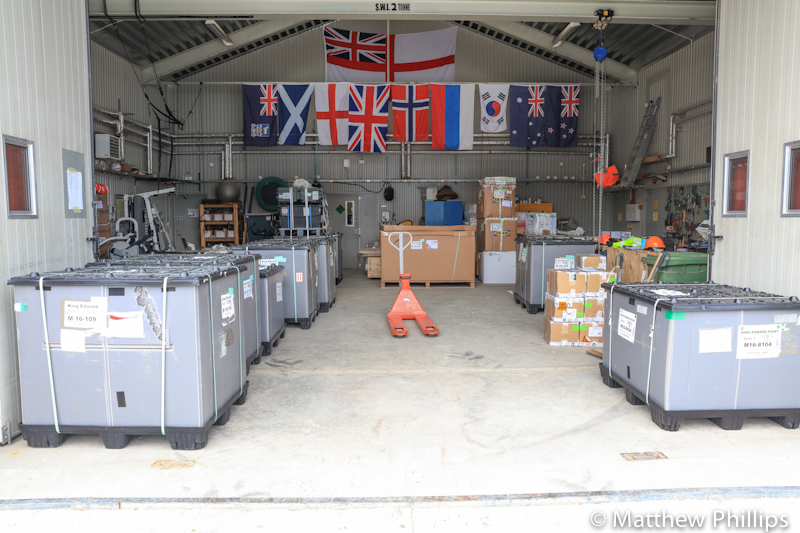 And after. This doesn’t include any of the food or booze for the year. That goes, respectively, straight into the food store and bond. 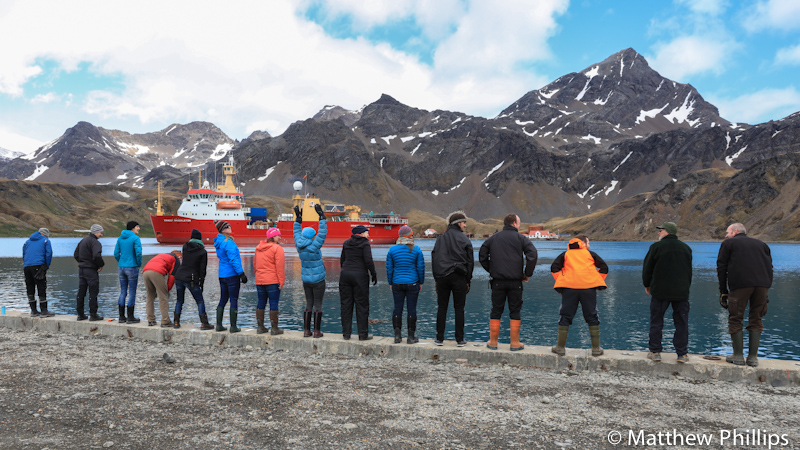 A few days after that the old team left in time to get home for Christmas. The usual farewell is a Mexican wave from the new residents. 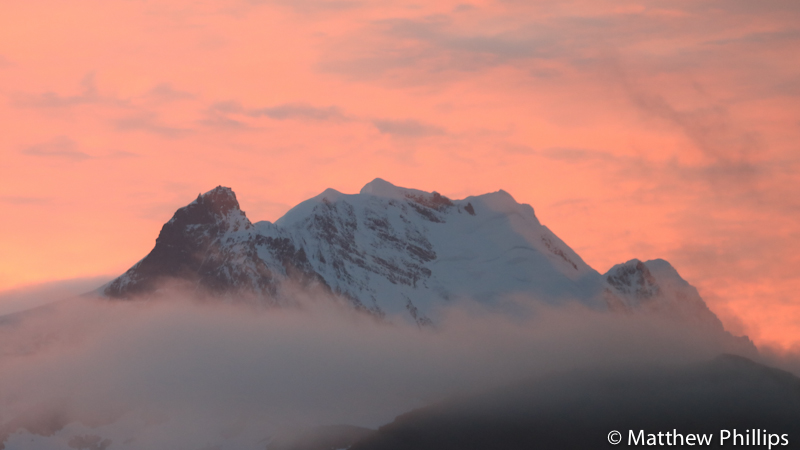 It’s not felt like summer has arrived here yet, though we have had a few nice days. But there is the occasional dramatic sky line. 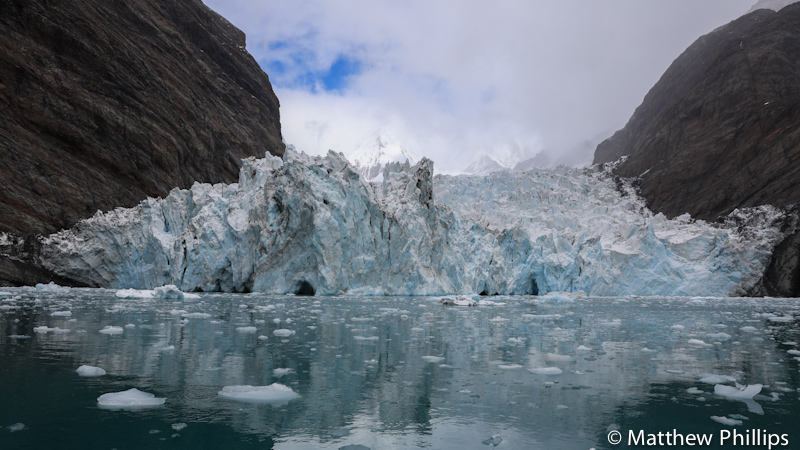 Training the new team with the boats is always an enjoyable task as it involves showing them around the boating area. The bottom of Moraine Fjord is one of my favourite places as you feel like you are near the heart of the island. Eventually the Harker glacier halts your advance. 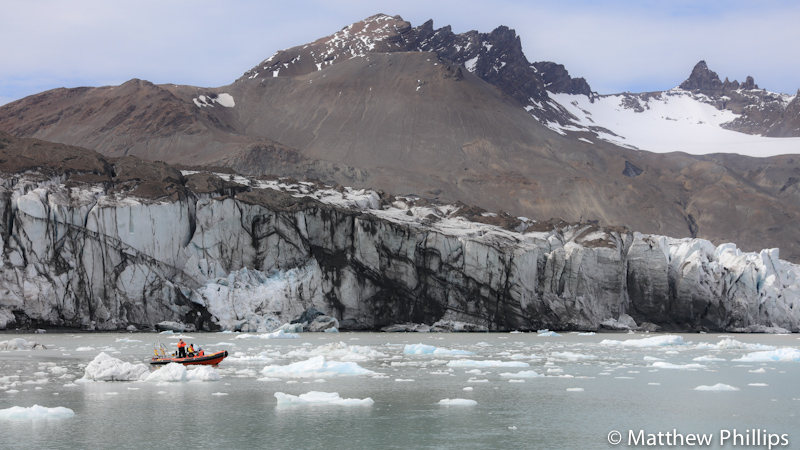 The Neumayer glacier has retreated a huge amount in the last 50 years, as much as 10 kilometres! I’ve spoken a bit about it in previous blogs but the front now is about 10 metres high and there is now land visible underneath it. An old chart we have shows this location at the 300 meter contour line, so as well as retreating a huge distance it’s also lost about 290 metres in height. This isn’t a Chinese hoax! 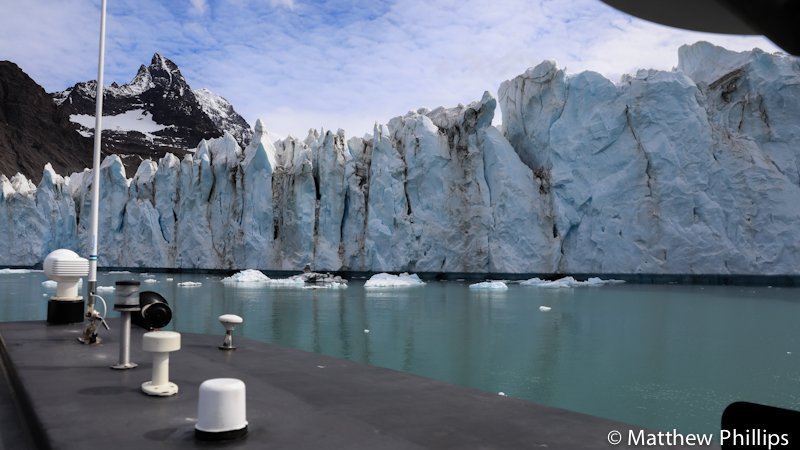 The left hand end of the glacier seems to still be floating and actually looks like the glacier might split into two different glaciers as it retreats. 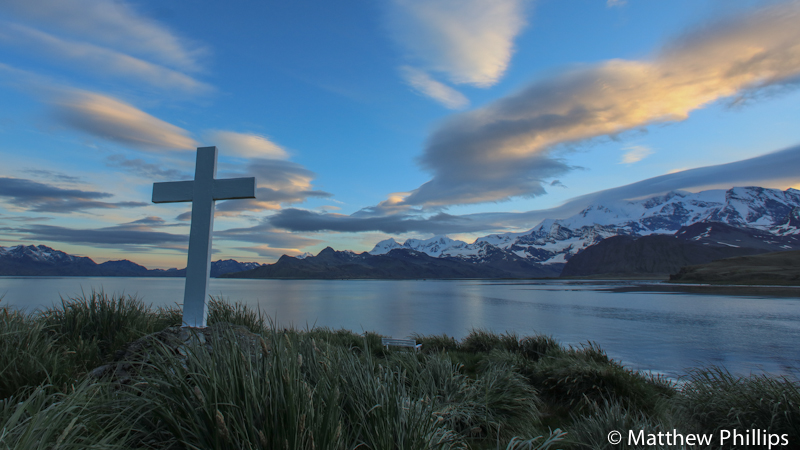 I always have grand plans to get out more in the evenings to do some photography. Shackleton’s Cross (memorial) is only about 150m from base so is a quick place to get to if it suddenly looks nice. 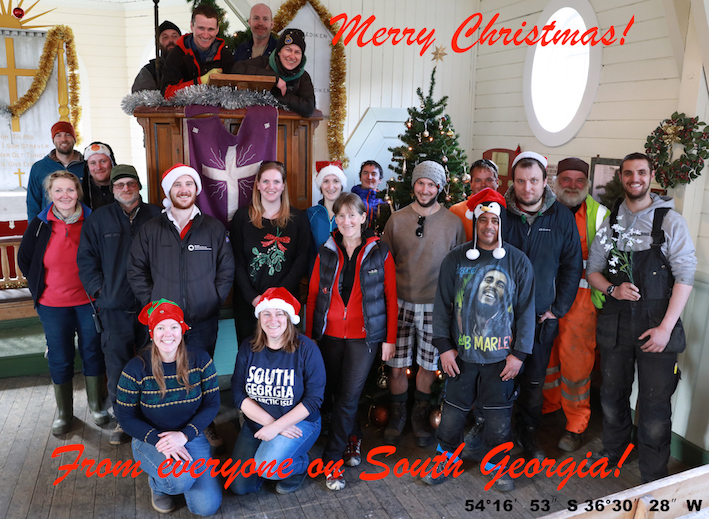 Decorating the church is traditionally something most people on base help with, the reward of mince pies and mulled wine is usually enough to draw a crowd. It’s also the best opportunity to take the Christmas photo we send to all the other Antarctic bases. 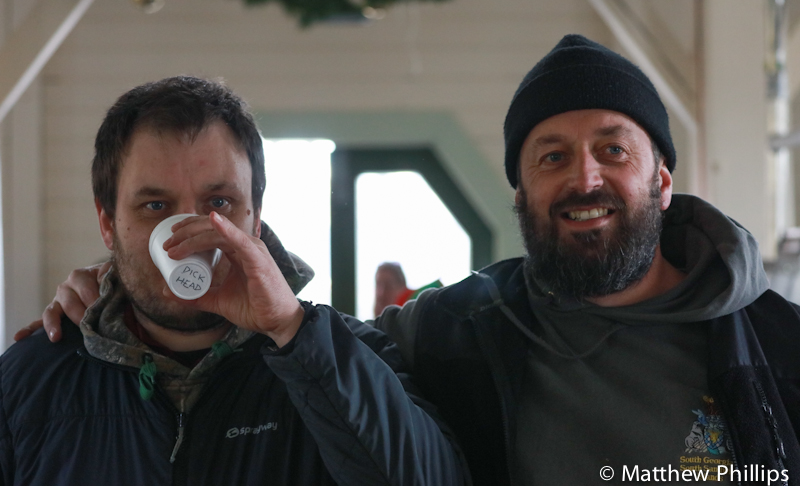 Adrian and Andy are electricians with the government builders team. Such is Andy’s respect for Adrian that he personalised the bottom of his mulled wine cup. 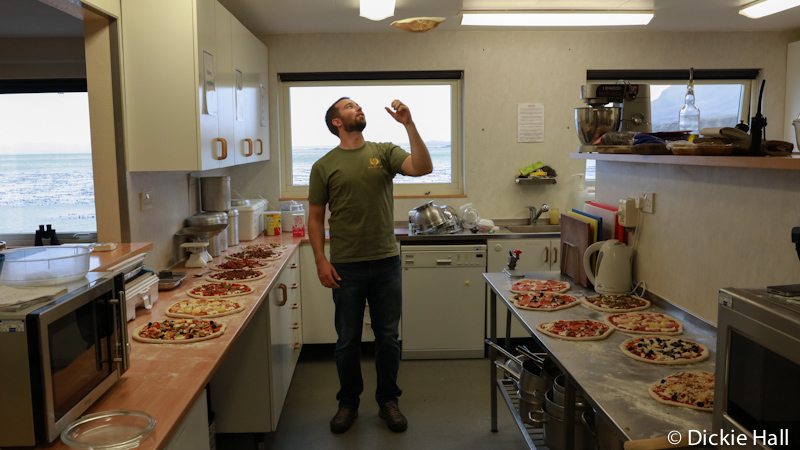 As well as the luggage you can take on the flight down you are allowed to fill a ‘p-box’ and send it down on the ship. The first year it’s always difficult to know what to add. This year was easy. I’ve been making pizzas on base for a few years now so the natural progression was to cook them with pizza stones, so I bought a couple and added them to my p-box. After some trialing with the stones I got to grips with using them – they make a massive difference!  So the Friday before Christmas I did a pizza and quiz night for everyone on base. 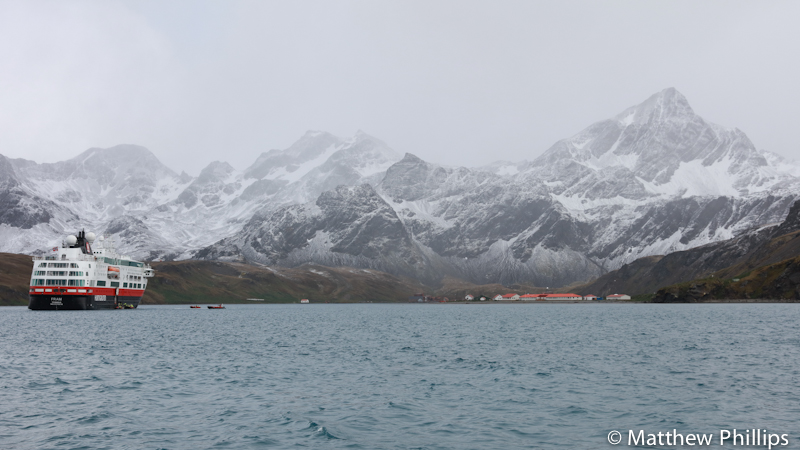 Christmas eve saw the weather turn for the worse. Most people wouldn’t complain about snow around Christmas but we had a BBQ planned for Christmas day. The tourists don’t mind, so long as they can get ashore they are usually happy. 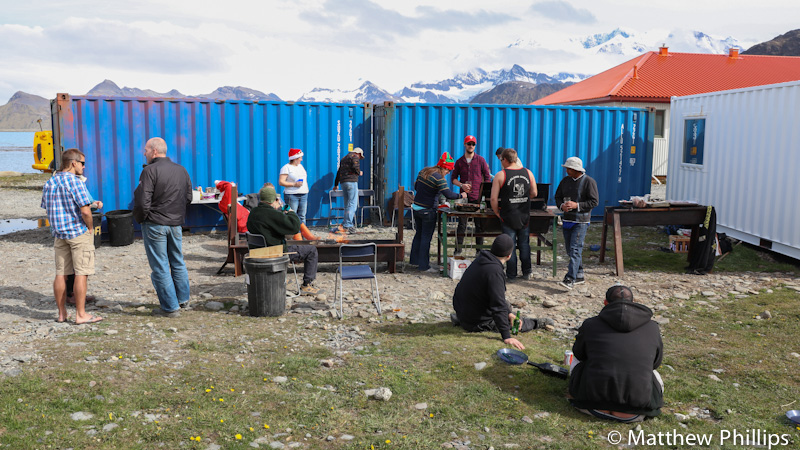 For the fourth year in a row the weather on Christmas day was close to perfect for a BBQ. The only tourist ship that day was in early so the museum staff were able to join us from early in the afternoon. 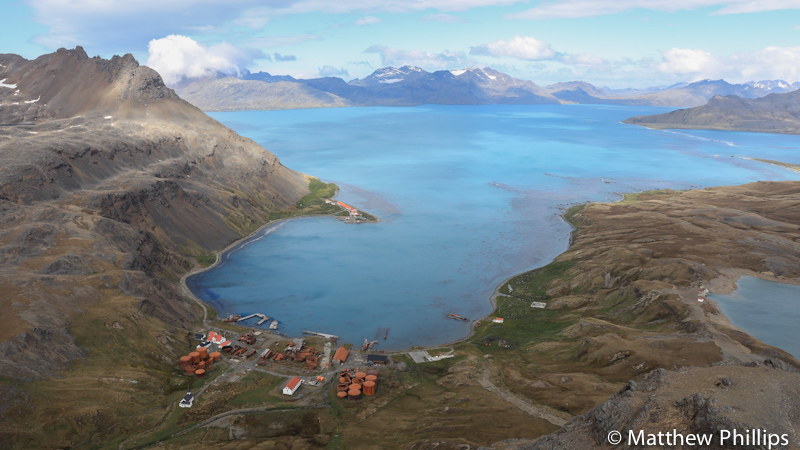 Jerry (Station Leader), Fraser (Doctor) and I headed out for a walk on boxing day. Mt Hodges is the obvious peak to go to from base. On a clear day its one of the best views around. 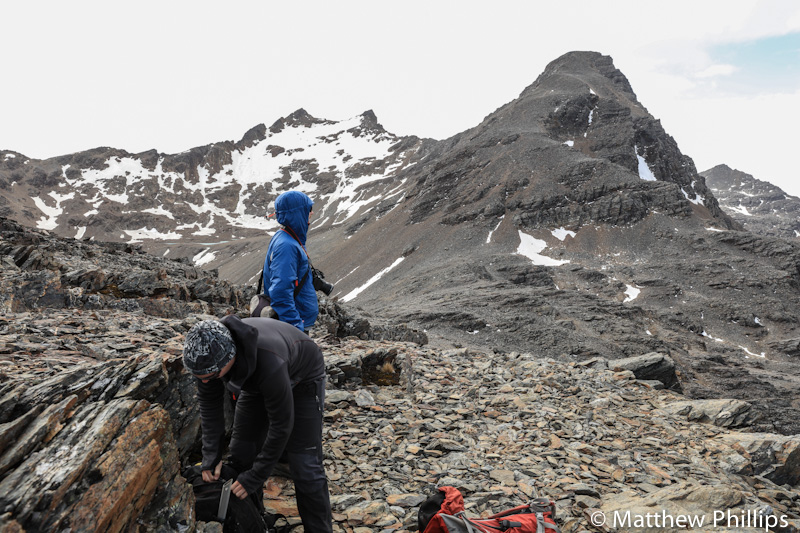 I took this just before we left Orca peak on our way to do Hodges (obvious peak in the photo) As we made our way to the summit the weather came in. 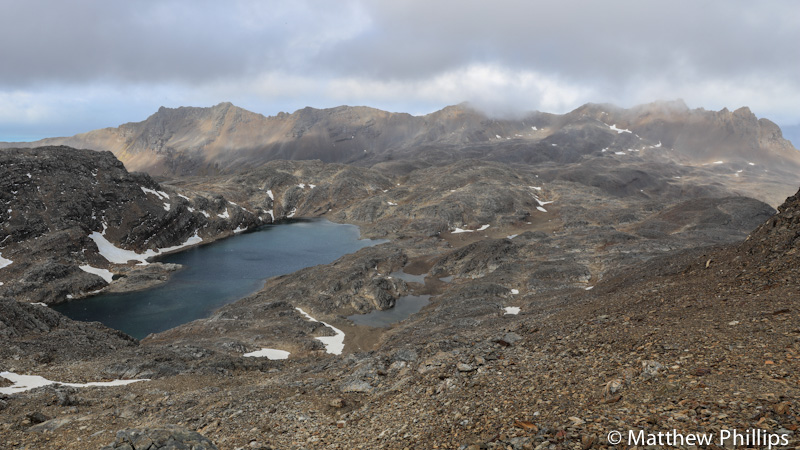 Dropping off the other side from Hodges means working your way though the maze like terrain to the north of the peak. As we dropped down the weather lifted… typical. 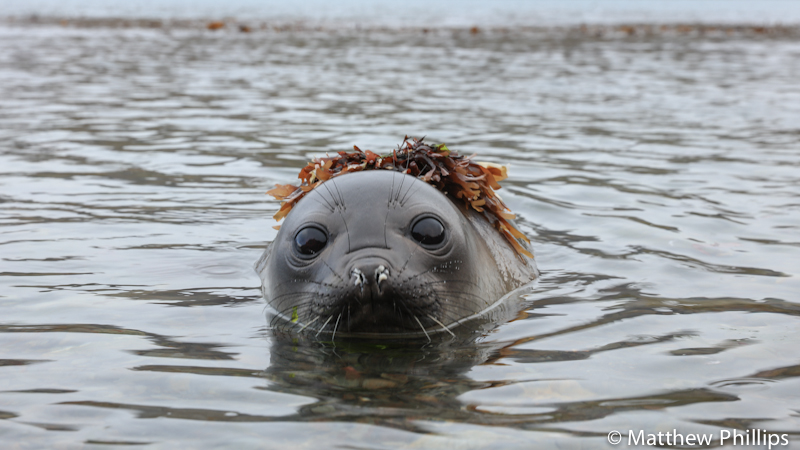 The elephant seals are now playing in the water most of the time. This one managed to get some kelp amusingly draped on it’s head.

Hope everyone had a great Christmas and new year!

(Note: Comms are currently down at KEP so this has been published from the UK. It may take a while for the internet to get back up and running again so communication to/from Matthew will likely be delayed!).