And then there were nine…

April is traditionally the month where base shifts from summer into winter. The nights are longer than the days and base numbers plummet with the departure of the summer staff. It’s also an early warning for me that my days are numbered! I usually leave sometime in July so my days on base have dropped into double figures now. 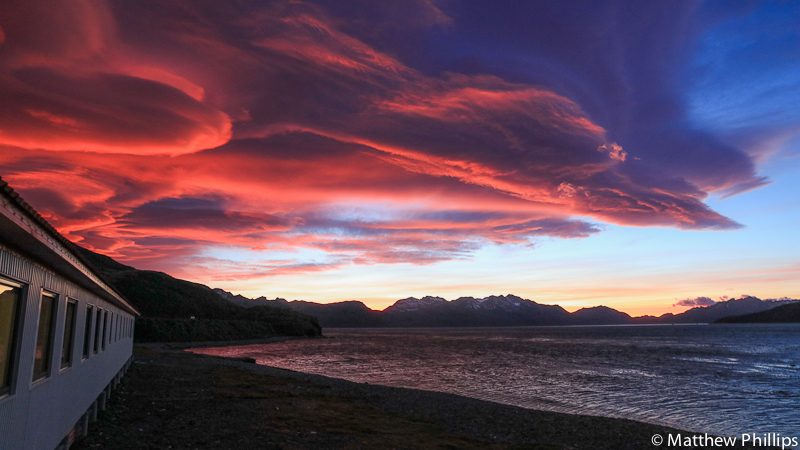 During the summer months the sun rises straight up from the lowest point on the horizon (Sorling Valley), but as winter approaches its angle decreases until you don’t see the sun at all in the morning. It does give some spectacular sunrises though. 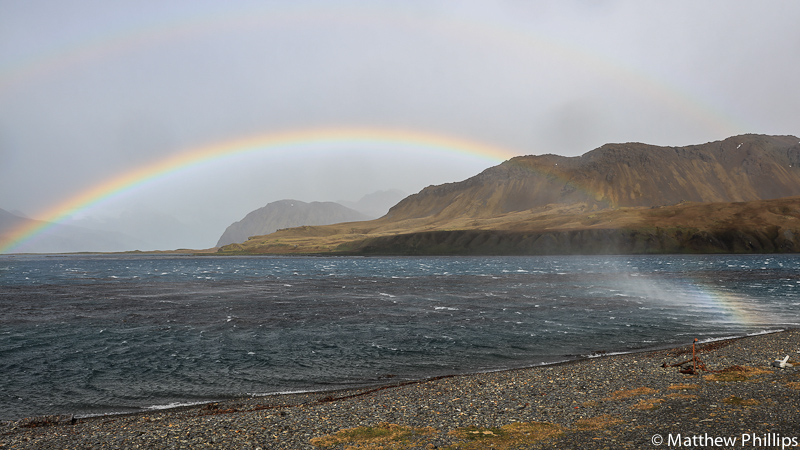 I’m sure I’ve said this before… Shortly after the equinox the weather goes haywire. In April, we had two of the biggest storms I’ve seen here. One fishing ship recorded, while they were hiding in the relative shelter of the bay, a gust of 93knts! Pictures and video never really do extreme weather justice but the rainbow colours in the spray being picked up from the sea is pretty cool I think! 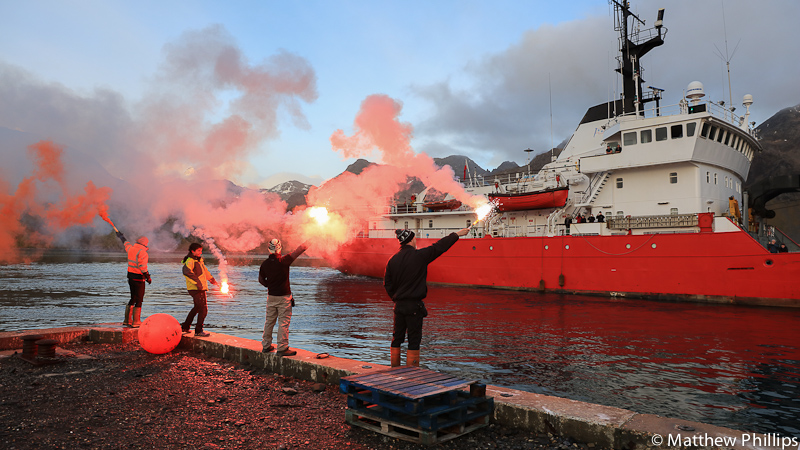 The summer staff were taken in two trips by the Pharos. The builders make up the bulk of the people leaving, the Postmaster goes, as do any remaining museum staff. 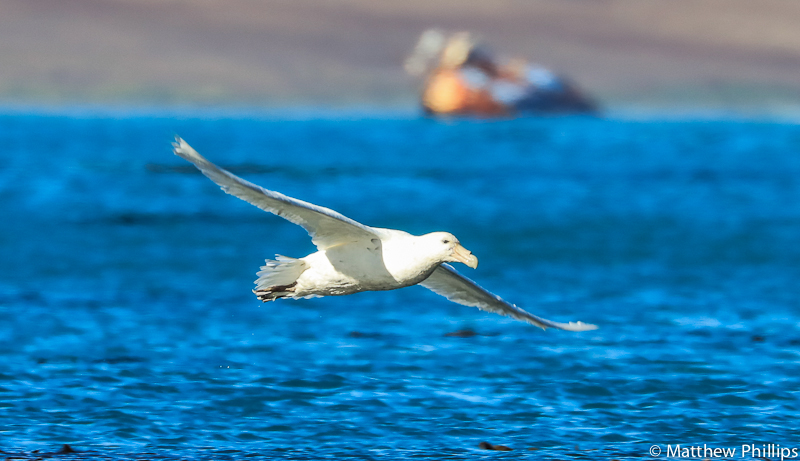 I didn’t get out quick enough to catch this white morph giant petrel on the beach but the long lens got a decent shot. 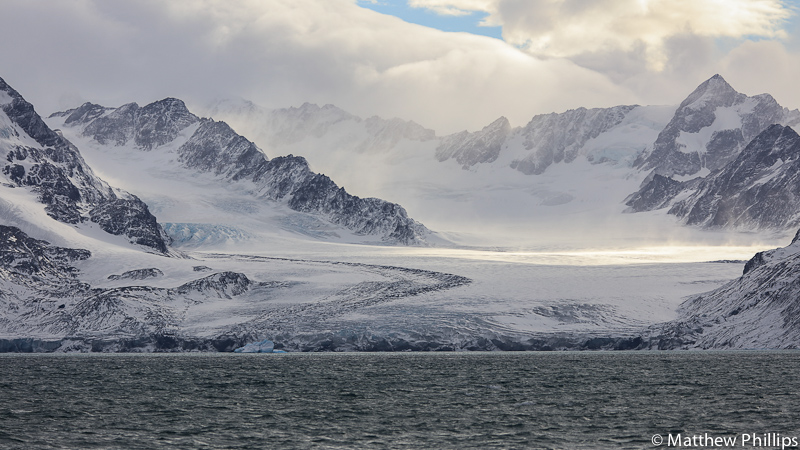 The Konig Glacier with some katabatic winds blowing down her. You can just see the snow being picked up by the wind if you look in the sunny area. 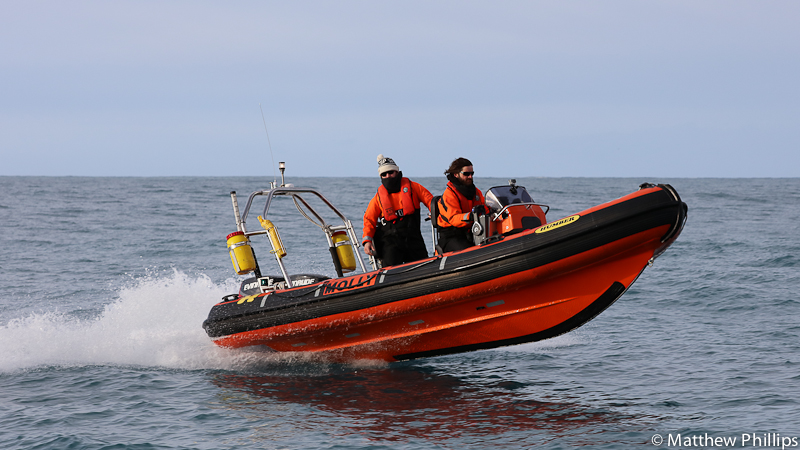 Paddy and Kieran getting some air on the way back to base in Molly. 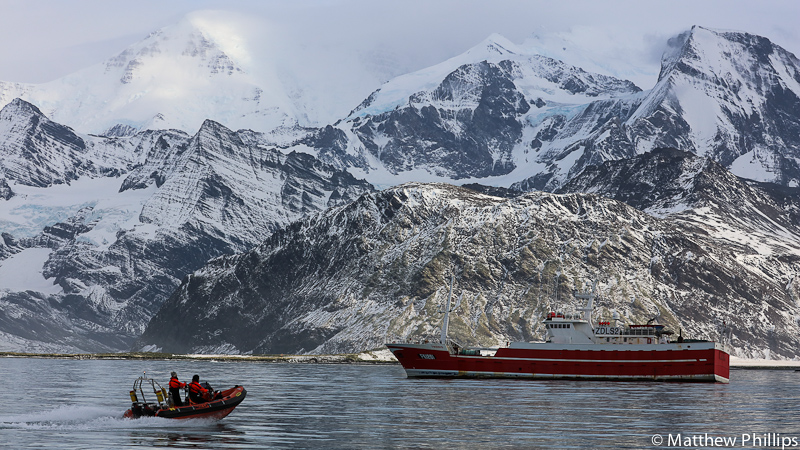 April is usually the start of the long-line fishing season. Six vessels make up the fleet that come in to catch Patagonian toothfish or Chilean sea bass as it’s known in the shops and restaurants. The fishermen call toothfish ‘white gold’ due to its value. The licence fees for toothfish make up more than half of the South Georgia government’s income. More than icefish, krill and tourism put together. 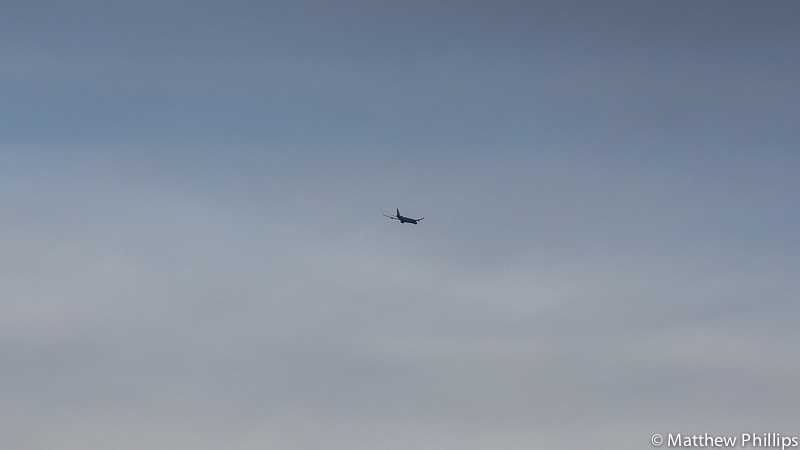 A fairly common site for most, but a rare one for South Georgia. The RAF fly over the South Georgia fishing area every now and then, looking for illegal fishing vessels. A Hercules flies fairly low and will have a look in all the bays on the island while a refuelling plane will support it from higher up. I didn’t have my camera handy as the Hercules flew past base but I did manage to spot the refuelling plane. 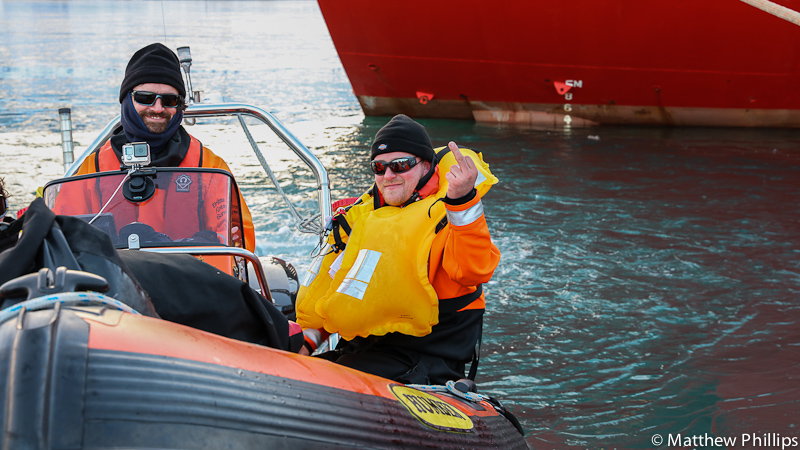 Every now and then someone slips on a rock while getting in or out of a boat when we do landings. The lifejackets are automatic i.e. if the mechanism inside gets wet they go off. Dave was the first one to set one off this season, he took the humiliation as well as can be expected. 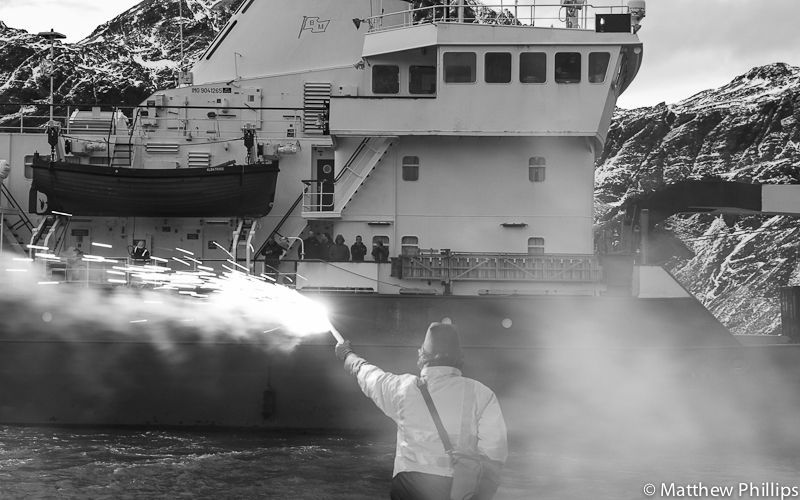 The last of the summer folk left in mid-April. Taking us down to nine people on the island for a few weeks. 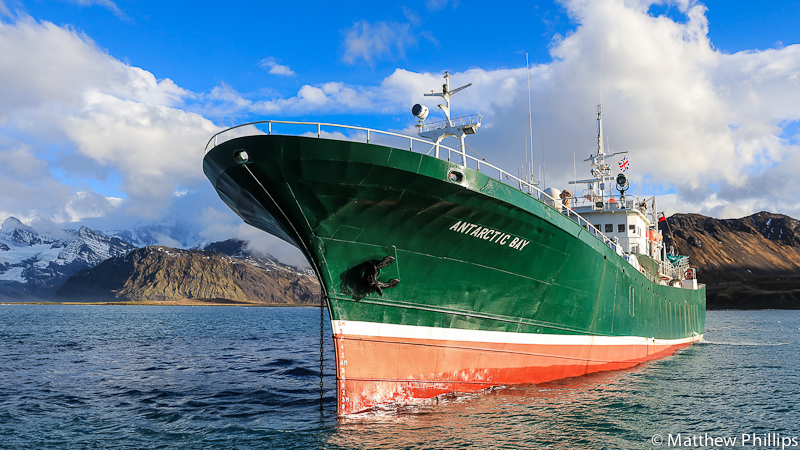 Antarctic Bay is one of the toothfish boats. As with all vessels involved in fishing the government officers go onboard for several hours to brief the crew and inspect the vessel for the correct fishing and safety equipment. Once they are happy the vessel should get a license. 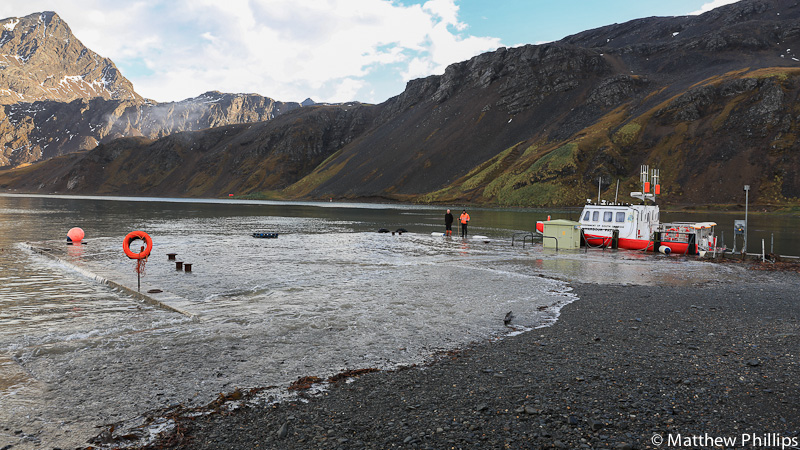 The spring, or ‘king’ if you are American, tide after the equinox tends to be among the biggest of the year. Spring tides are simply big tides (high, high tides and low, low tides) caused by the gravitational pull of the sun and the moon when they are in alignment with the earth. Barometric pressure can affect this as well. A high pressure system can cause the low tide to be even lower than forecast and low pressure can cause a high to be even higher. We had an unusually low pressure (950 mbar) coincide with a big spring tide. I’ve seen the sea come up to the capping on the wharf but never cover it like this! 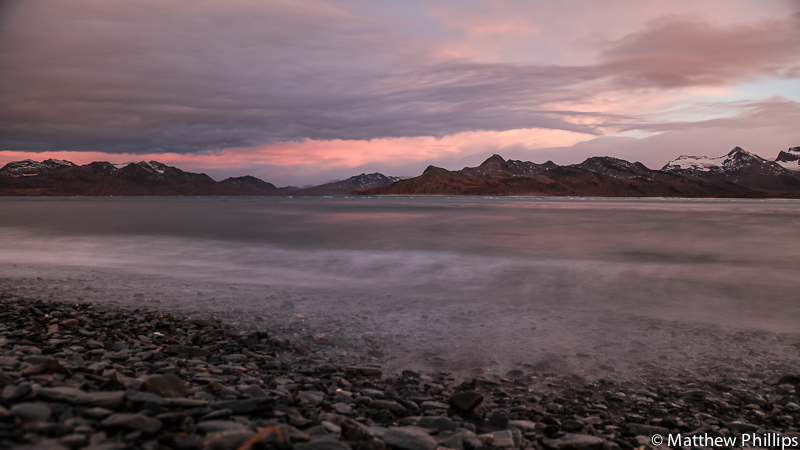 It’s not often we get breaking swell hit the beach in front of base but, like I said, we had some stormy weather in April. I managed to set my camera up with the neutral density filter to try and get a shot. It’s tricky getting the settings right as the light changes so quickly when the sun is going down. 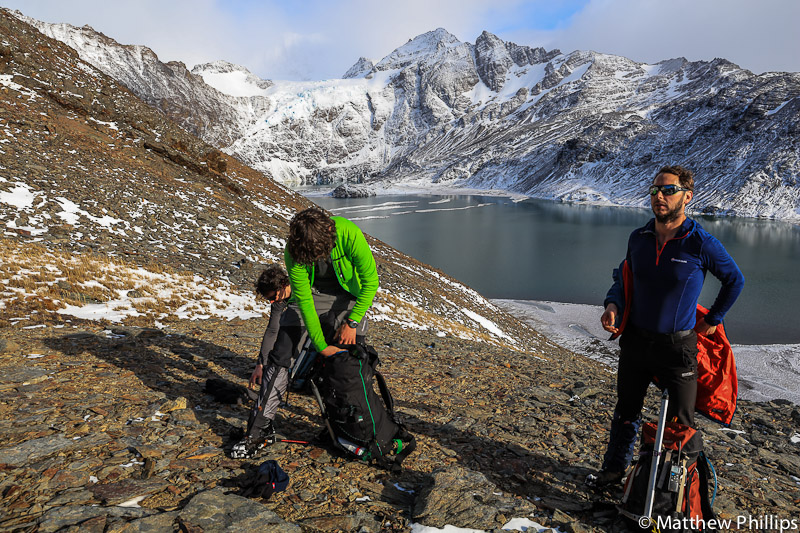 The weather settled towards the end of the month and made field travel a little more enjoyable (possible?!). 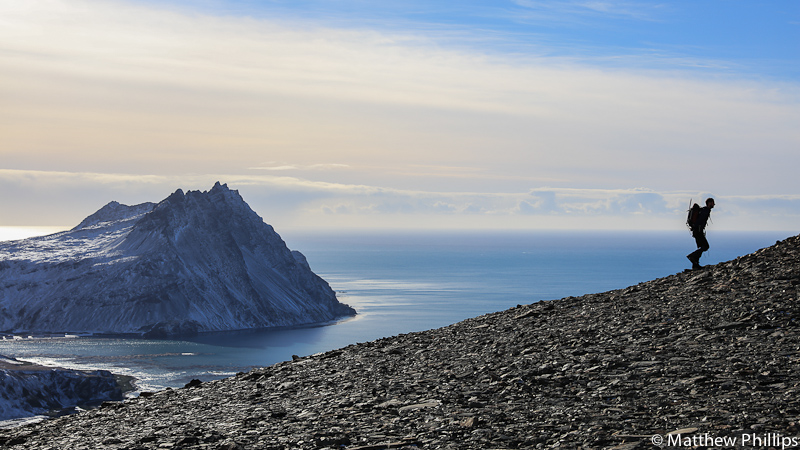 Jerry making his way up the steady slope of Osmic hill. Base is just visible on the left of the shot. 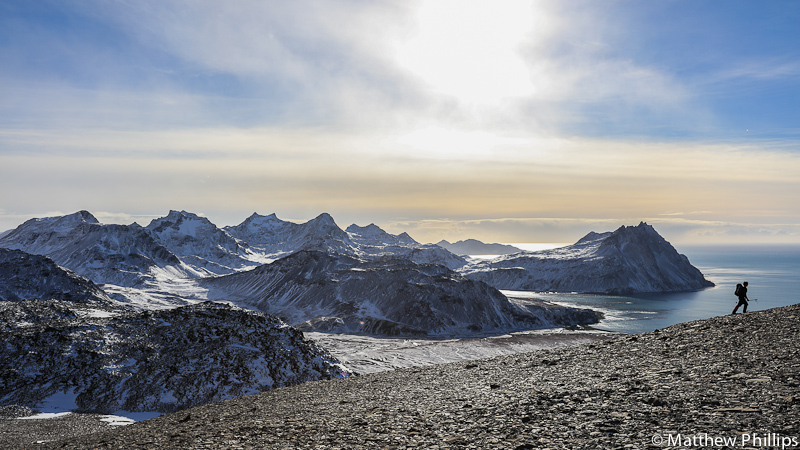 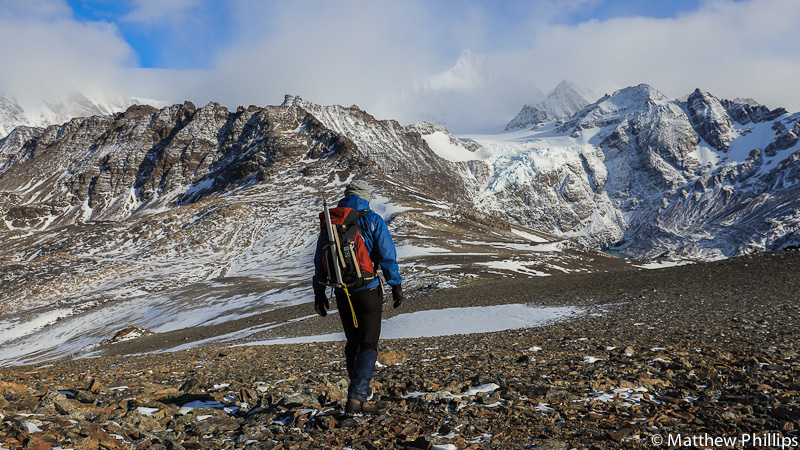 After Osmic we had a look at the peak next to it (above Jerry’s head and to the left). South Georgia peaks usually look much steeper from a distance. Often you get up close to something and find out it’s not as steep as you thought it was from 100m away. 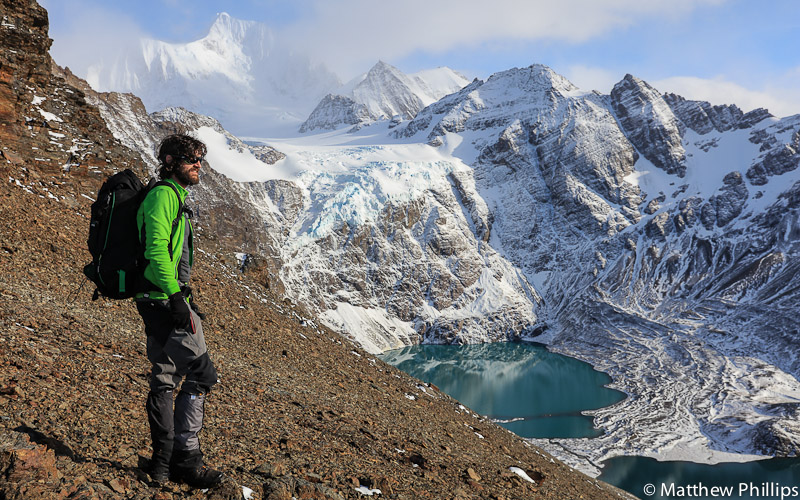 After some scrambling the terrain became quite easy and getting up higher was easy enough. The view down to Upper Hamberg Lake and its hanging glacier was becoming impressive. 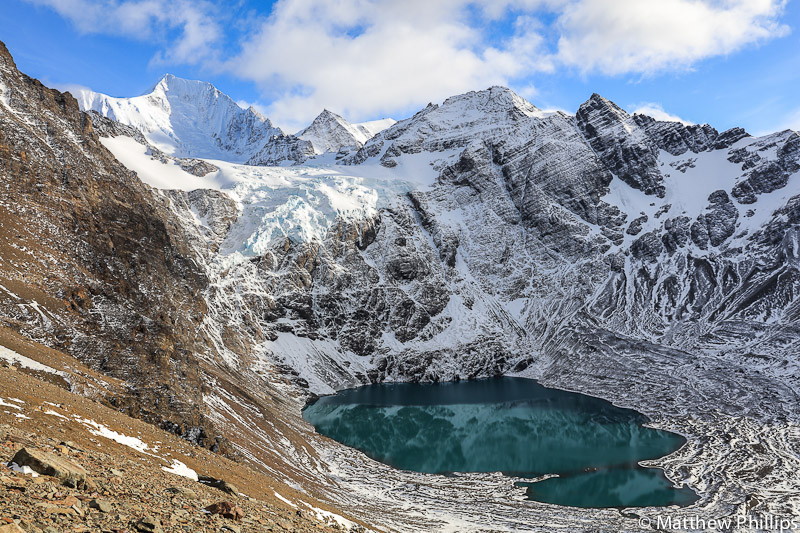 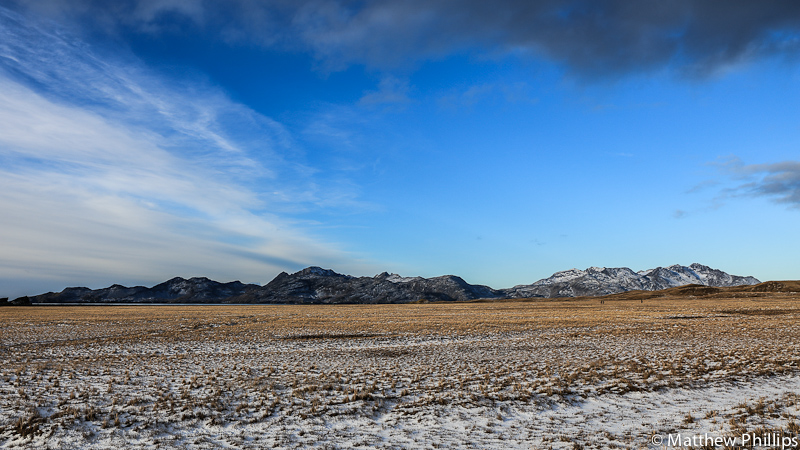 Turning for home means crossing Hestesletten, a flat area of ground about 2 kilometres square, which seems to go on and on and on. Though, to be fair, flat ground is rare in South Georgia. Three small figures just visible right of centre.