Well, I’ve not done a blog in a long time. I could give various reasons but I’ll spare you! I’ve found myself down in Antarctica again for another year (+?) with the British Antarctic Survey (BAS) at Rothera Research Station, the largest of their bases. I’ve hung up my boating boots this time as I’ve take on the role of Winter Station Leader. That means I’m behind a desk most of the time but when I do get out and about it’s fairly amazing. 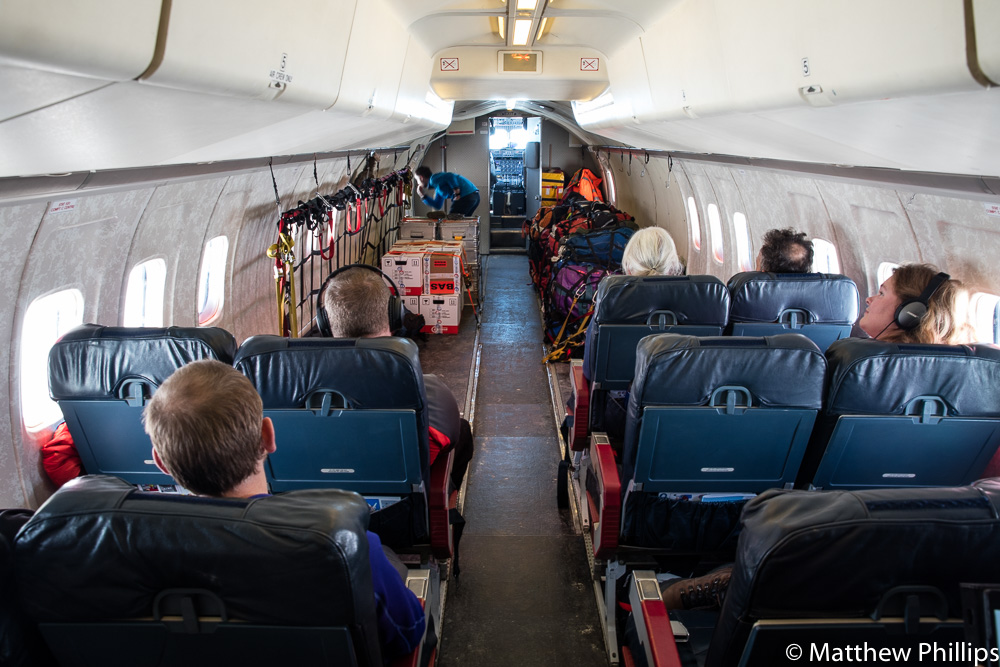 Going into South Georgia was always by ship but Rothera has its own runway so most people arrive and leave by de Havilland Dash 7 aircraft from Punta Arenas in Chile or from the Falkland Islands. It’s about a four hour flight. Unfortunately it was cloudy on the way down so we didn’t get much in the way of views. 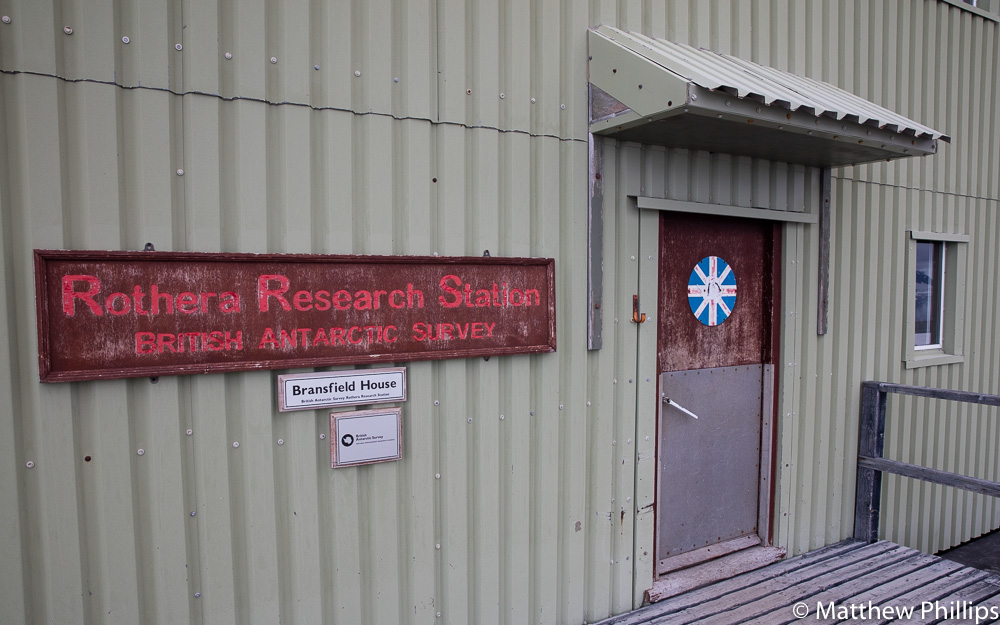 If I can get my act together I’ll try to get a few blog posts out over the next couple of months. I’ll try to use each one to introduce different parts of the station. Arguably, the central hub on station is Old Bransfield House. It’s home to most of the offices on station, including my own and the operations team, which are largely responsible for all the aircraft operations. Jess the Station Leader has her office in here as well as being home to the doctors surgery, the technical services (electricians, plumbers and carpenters) office, the met team, visiting scientists and electrical engineers. 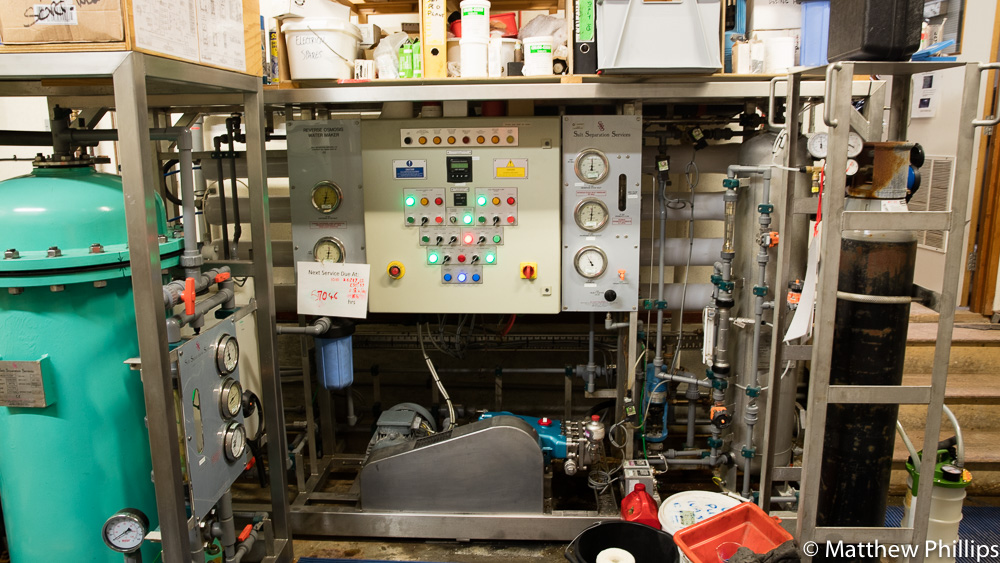 OBH is also home to some fairly vital equipment. Behind where I’m taking the photo are several large tanks containing water that has been processed though the reverse osmosis (RO) plant (that thing in the picture). There is a back up but if anything were to happen to the RO plants we would have to evacuate station. We have lots of spare parts so it is unlikely but drinking water is something that you take for granted in the UK. 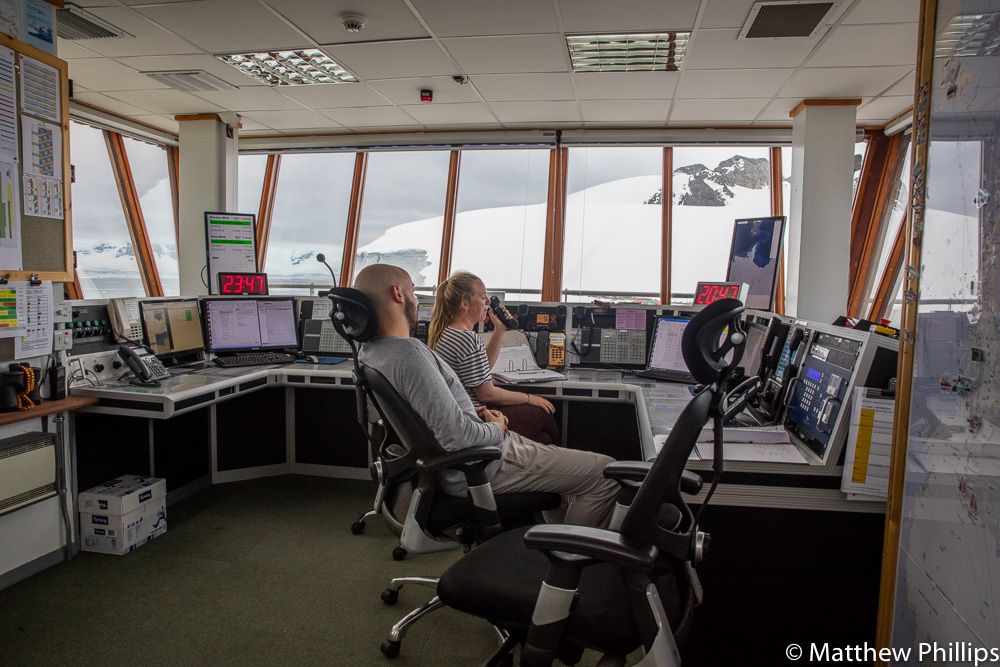 The operations tower handles all BAS aircraft movements as well as many other foreign aircraft that pass through on the way to the continent. The visiting aircraft are from other national programs and a small number of commercial operators that take people to the pole or to Vinson Massif (highest mountain on the continent). The tower also communicate with boats, ships, BAM heavy plant and cranes, and also take weather obs from field parties. I should add that by ‘the field’ I mean teams on the Antarctic continent who rely on aircraft taking them in and out. Towards the end of the day the tower does ‘scheds’ with field parties to make sure they are okay and pass on the news from the real world, in an attempt to keep them in touch and let them know that someone cares! [Editor’s Note: Matthew’s long serving editor works in the Ops tower and is disappointed that this photo does not feature her. After five years of long arduous editing service with very little remuneration, she has been shunned.] 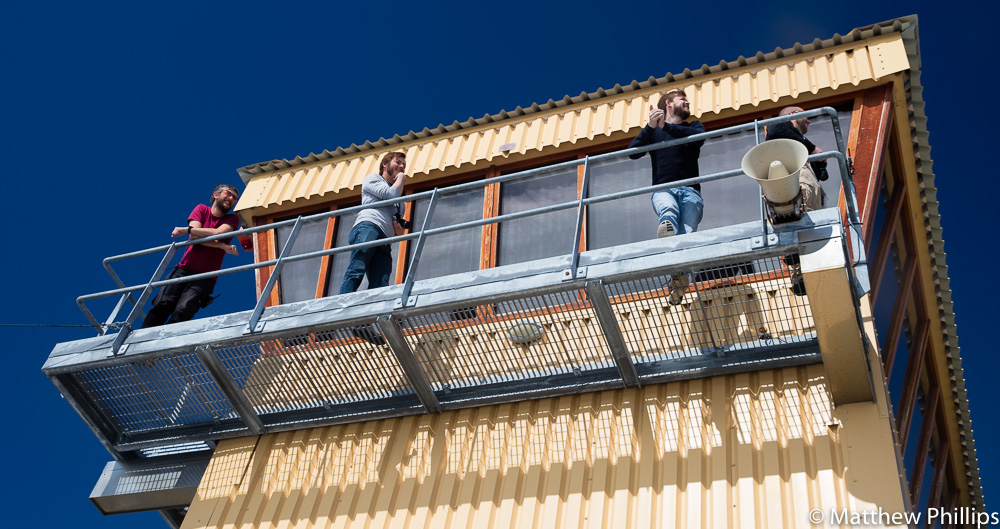 Occasionally the tower’s balcony will draw a crowd for something special. 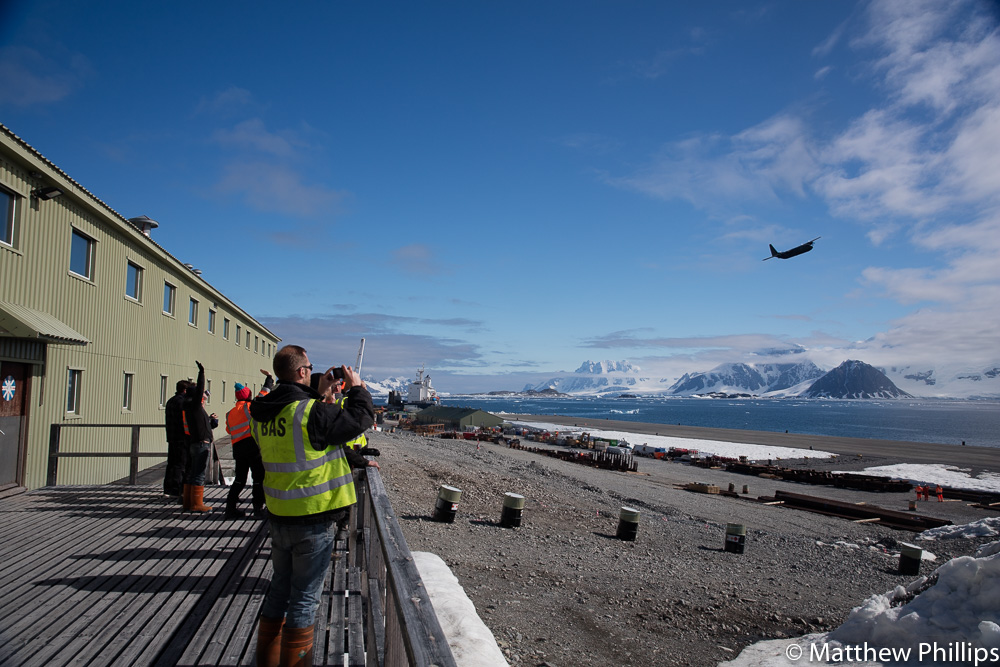 For a week in the middle of December we had a daily flypast from an RAF Hercules that had flown from Punta Arenas down to the continent to air drop supplies for the Thwaites Project that starts proper next year. It is a massive collaboration between BAS and the US Antarctic Program (USAP). 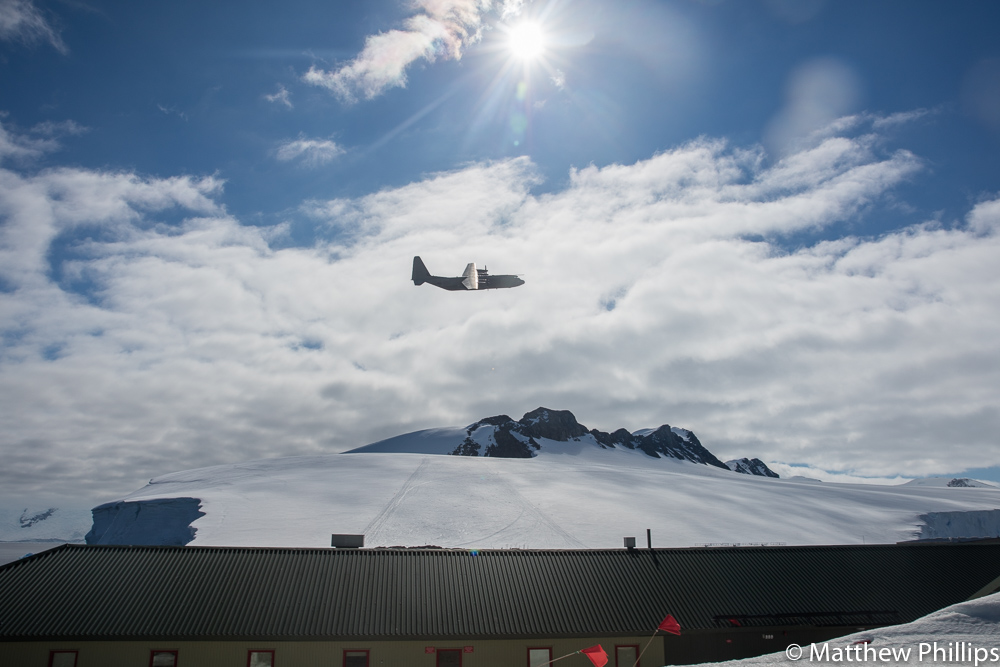 The building in the bottom of the picture is Admirals, one of three accommodation buildings. Directly beyond Admirals but below the Hercules is ‘the Ramp’. It is essentially a glacier that slopes its way down to station with rows of flags at either side marking the safe areas. It gets used most nights by skiers and silly snowboarders… no points for guessing which I am. The rocky ridge is called Reptile Ridge and is accessible so long as you have a Field Guide with you. 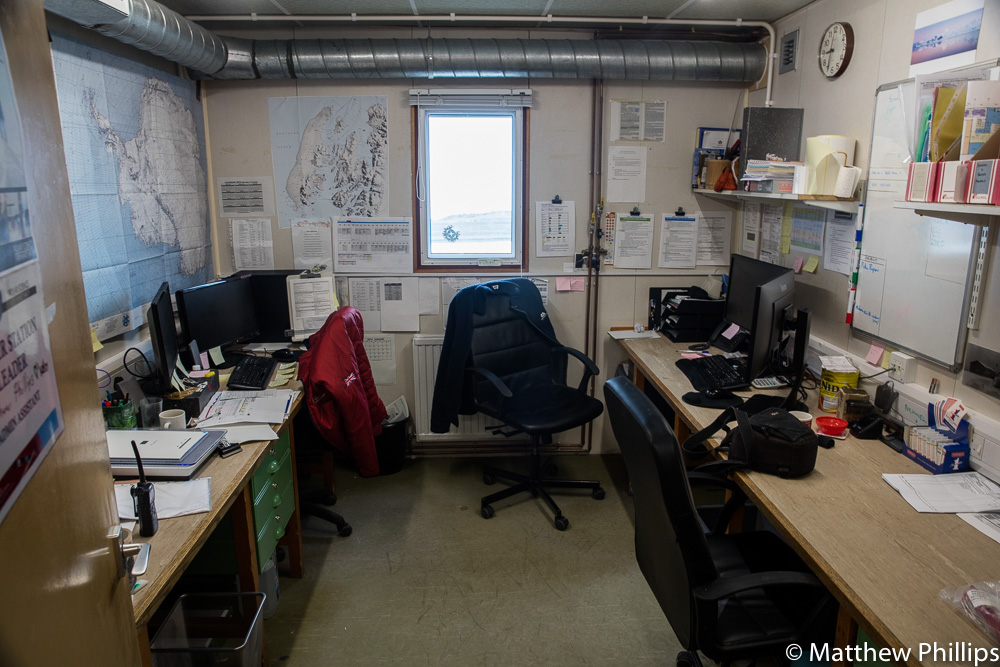 This is where I spend most of my days! Jess is the Station Leader which means she handles the overall management of station. Come April/May when she leaves I’ll take that on. For the summer months I look after all the international flights and cargo out of Rothera as well as looking after the room accommodation. When I was at South Georgia the busiest it ever got there was just over 50 people on station. Rothera’s busiest night this season has been 164. That’s not only the most people Rothera has ever had, but it also made us the second largest station in Antarctica. 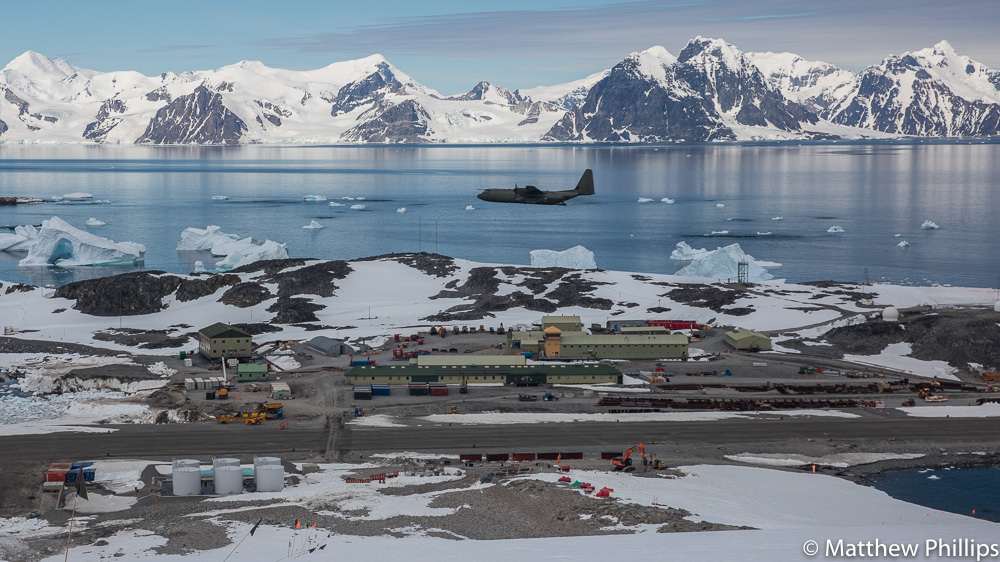 Looking down at station from the top of the ramp with the RAF Hercules over station. OBH tower is directly beneath the Hercules. 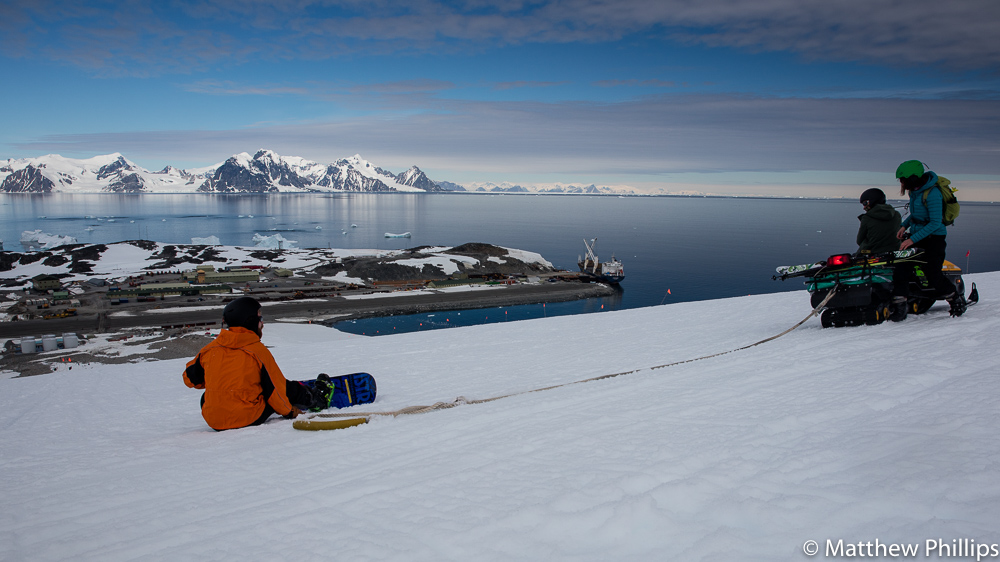 Some silly snowboarders at the top of the ramp. We have two skidoos that can be used for accessing the travel area and towing people back up the slope. 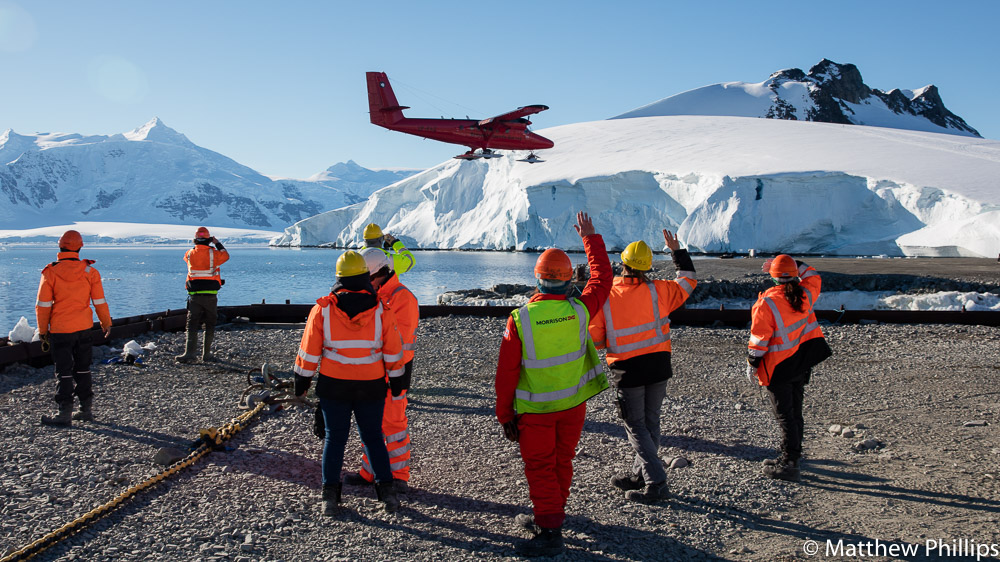 One of the three BAS Twin Otter aircraft coming back in to land. If you look closely you can see both skis and wheels – landing on the snow isn’t possible without skis. 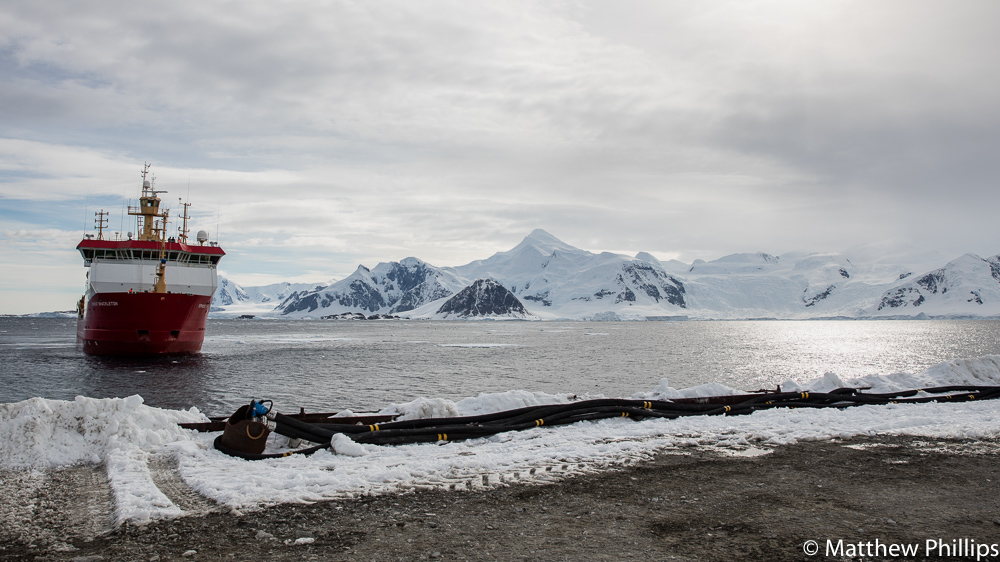 December time normally means station gets its first visit of the season by one of the BAS ships. They bring in all the station supplies at the start of each season. This is the RRS Ernest Shackleton coming in to unload for three days, everyone on station is involved in helping to unpack the various items. The frozen and dry food amounted to 90 tonnes! The ships also supply us with the fuel for station. You can see the hoses on the edge of the wharf that then run up to the fuel farm on the other side of the station. 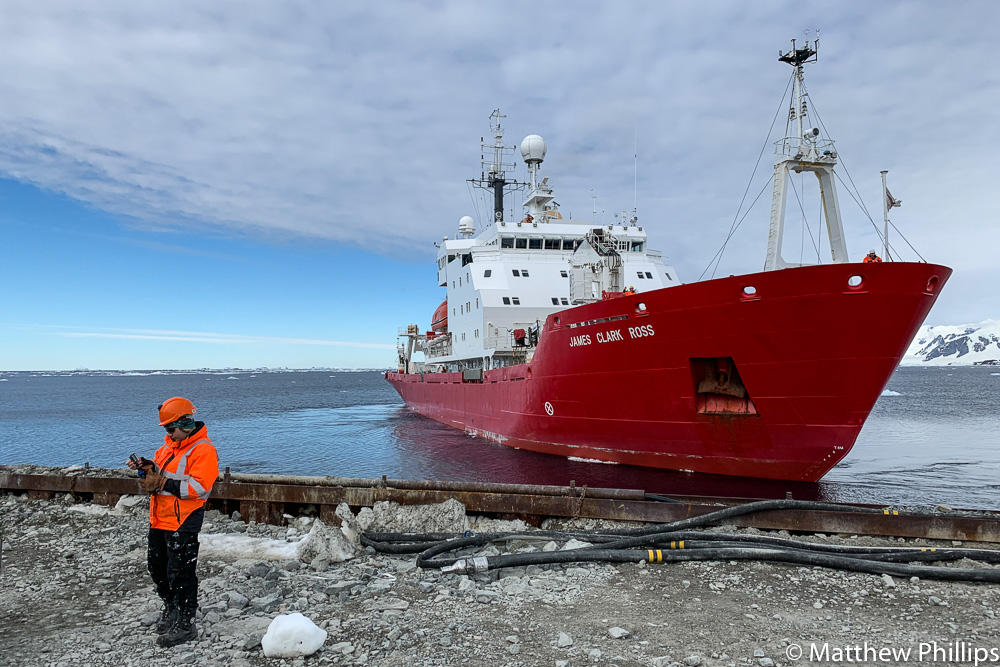 About a week after the Shackleton visited we had the RRS James Clark Ross come in for round two. Not quite as big this time but still two days work unloading cargo and getting it squirreled away on station. More fuel too. 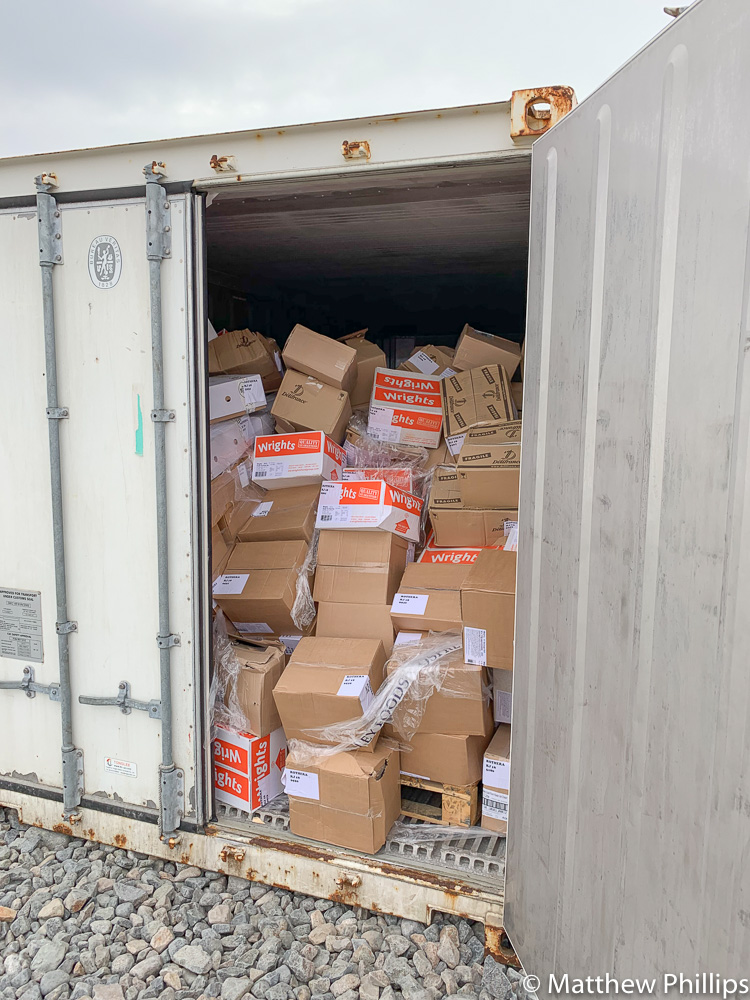 One of four ‘reefer’ containers with frozen food in. 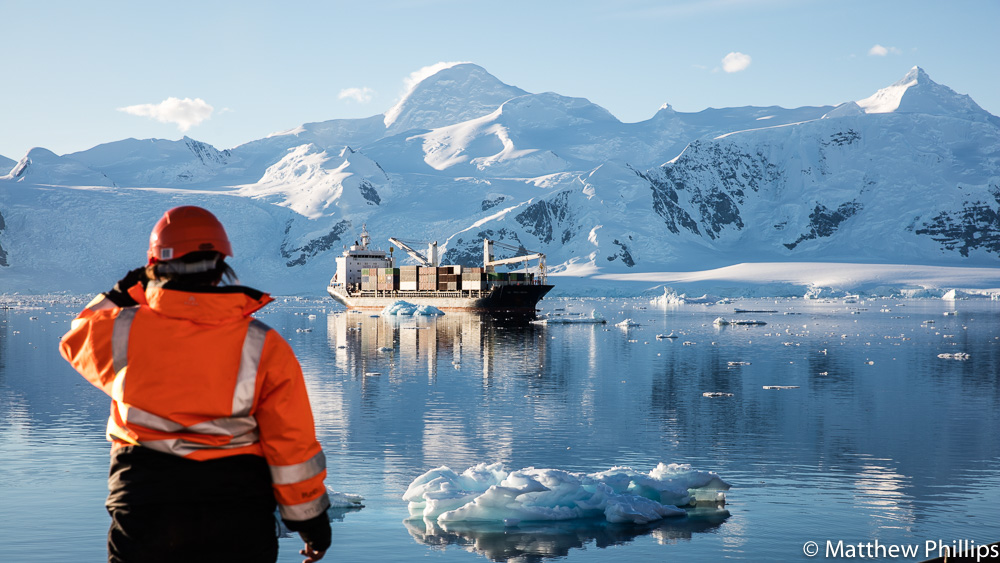 It is a bumper year at Rothera as we are having a new wharf built to accommodate the new BAS ship, the RRS Sir David Attenborough. BAM are the construction company that are building it and they sent down a ship loaded with all their supplies. That iss Jess in the foreground as we prepare to take their lines to get them alongside. 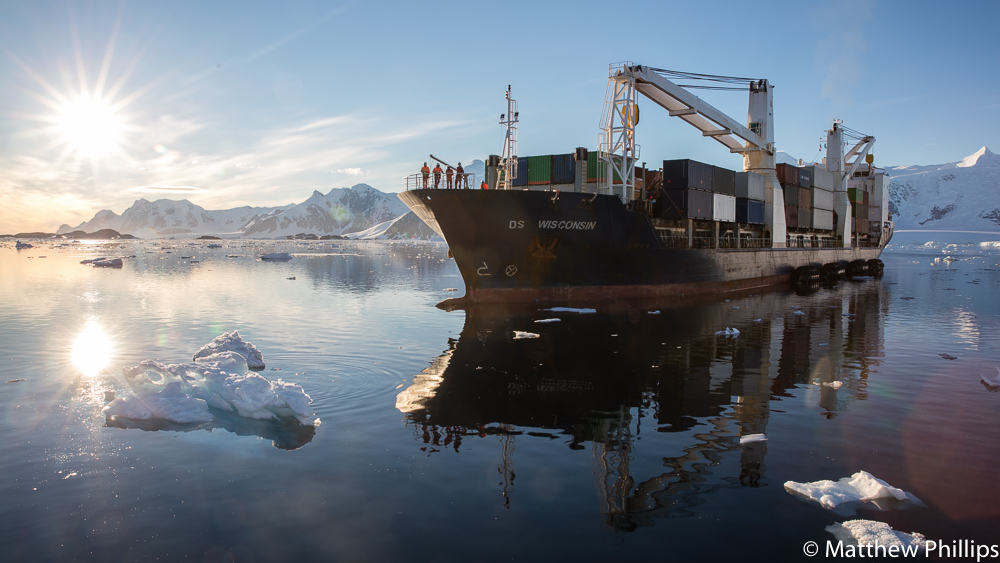 The Shackleton is about 80m in length, JCR is 99m but the DS Wisconsin is 134m so it was quite impressive to see her arrive.

The Shackleton had helped her through the ice and also to get her alongside. Usually a ship this size would have a tug to help. The Shack helped a little, you can see the bridge of the shack just to the right of the grey containers. 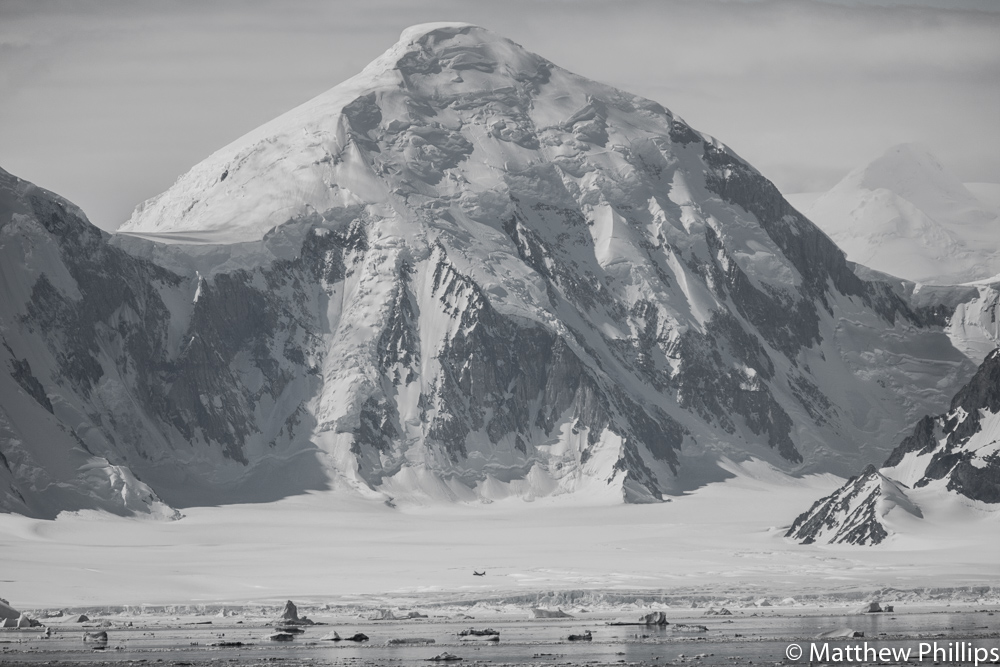 You can just see the Hercules at the bottom of the picture. The mountain above is one of the Gravier Peaks and is 53km from station. 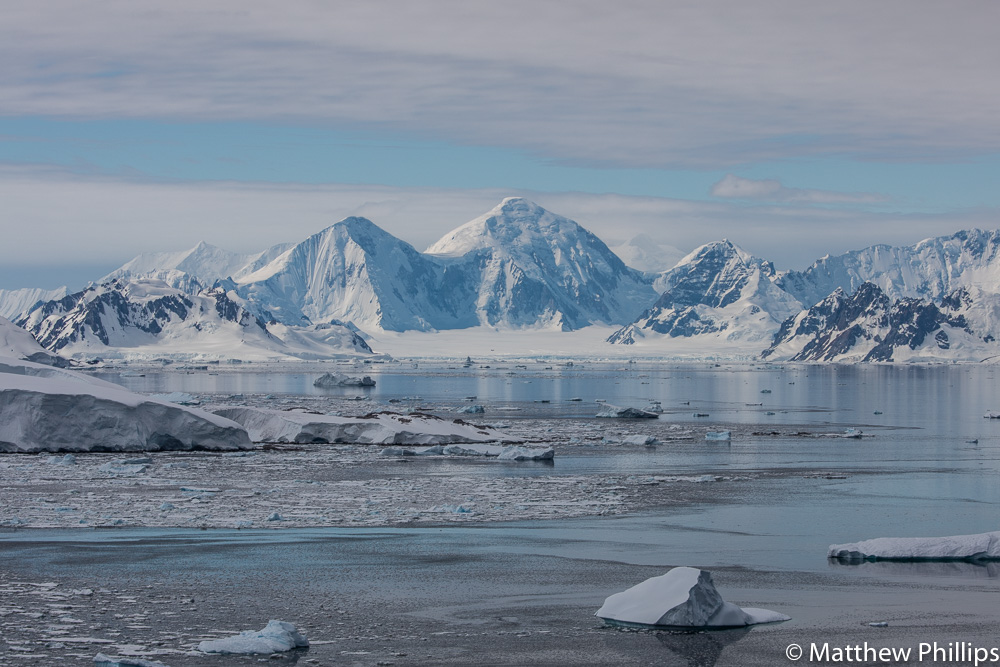 Pretty much the same shot but without the telephoto lens. The Hercules is just a speck in this one.

Hopefully it’s not another year before my next post, should be able to get a couple more out in the coming weeks…