So, I did not get on top of the blog writing in the summer. Spending most of the day in the office at a computer doesn’t really inspire me to do more computer work in my free time. Anyway, life is quieter on station now (I’m writing this at the start of July) so I might just catch up… 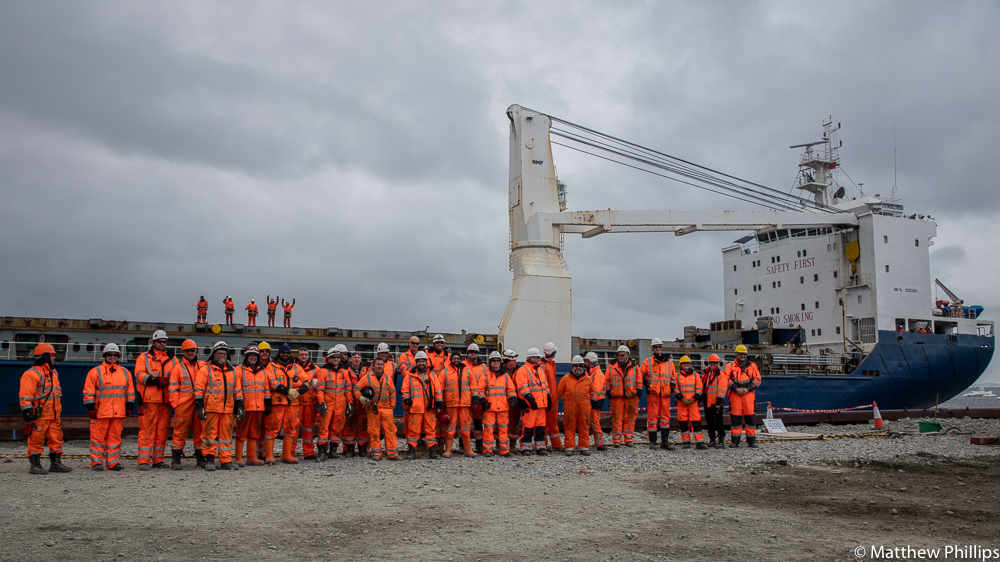 The crew of the DS Wisconsin managed to unload all the equipment and steel BAM needed to build the new wharf in early January. It was fairly impressive to see just how much came off the ship. That’s about 30 of the 50 or so BAM crew that would be here for the summer. Can you say Gouranga? (anyone who played the early Grand Theft Auto games should get that one.) 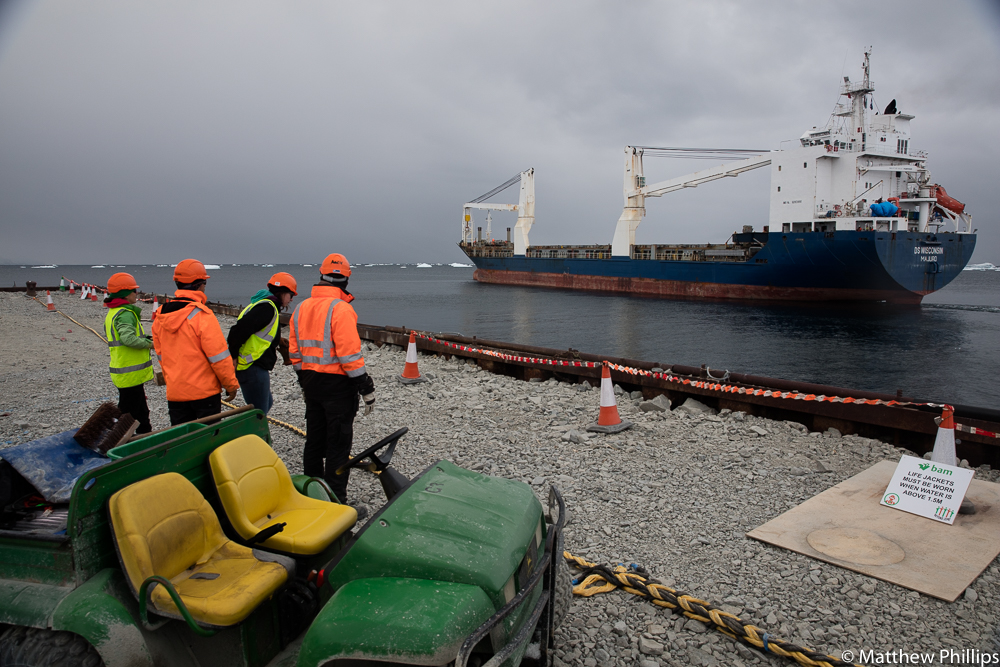 That would be the last ship to leave the Biscoe wharf. From here it didn’t take BAM long to get stuck into ripping the old wharf out. The new wharf should be completed some time around March 2020. If the weather plays ball that is. At their peak, numbers on station rocketed to over 150 and wouldn’t drop below that number for almost three months. My workload went into overdrive for a sustained period, and looking back on it now, it’s something of a blur. Before working for BAS, I worked for an outdoor education company in Hong Kong for three years (talk about polar opposites!). There I organised  most of the logistics and ran what was (probably still is) Asia’s largest provider. Hong Kong is the epitome of  the American ‘work hard, play hard’ mentality. My time there prepared me well for what was to come. 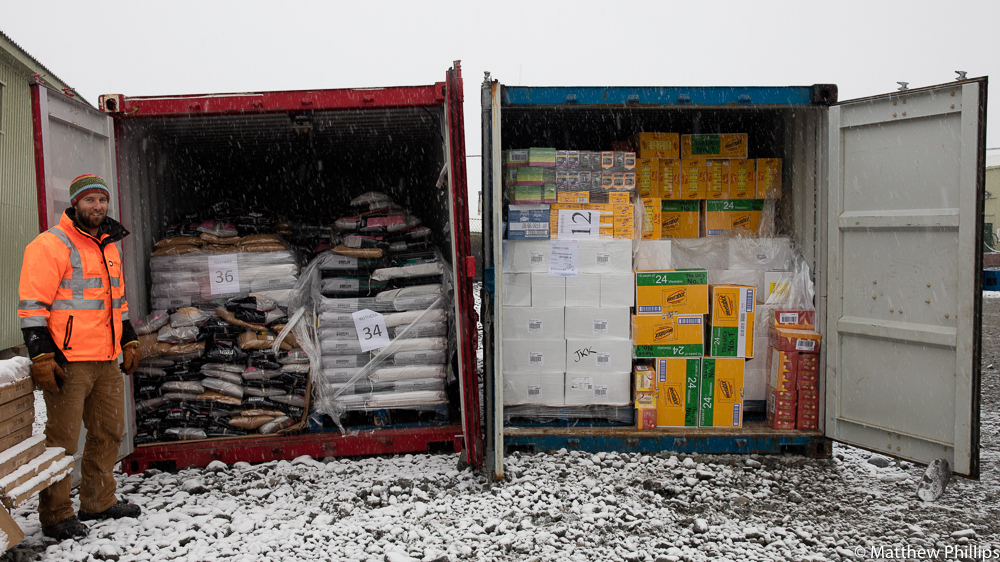 A large part of my job in the summer is organising where to store food. Containers are great but I also need to give them back to the ships at the end of summer so working out where to put all this stuff inside was a bit of a headache. I was quite happy as I was fairly sure there would be enough Weetabix to get me through winter! The container on the left was full of rice, pasta and flour while the right hand one had cereal and a very British amount of tea bags and milk powder. We do fairly well with food and drink down here but the one unavoidable bugbear (for most people) is having powdered milk. A fine selection of tea though! 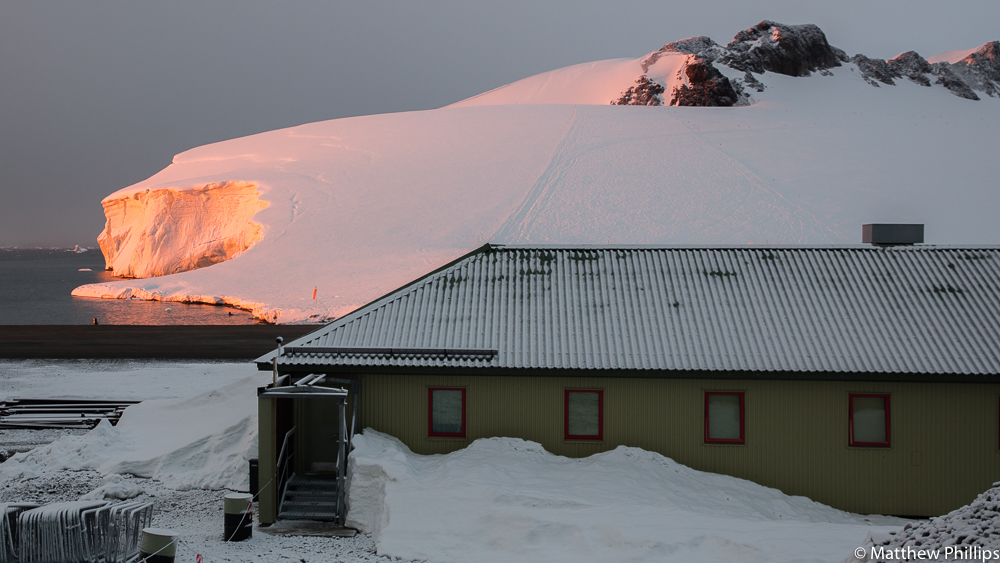 As we moved away from the summer solstice and 24hr daylight we started to get sunsets back. There was still plenty of last years snow, where it had drifted heavily, around parts of station. The bedroom or ‘pitroom’ windows need to be dug out after heavy snowfall as they act as a fire escape. 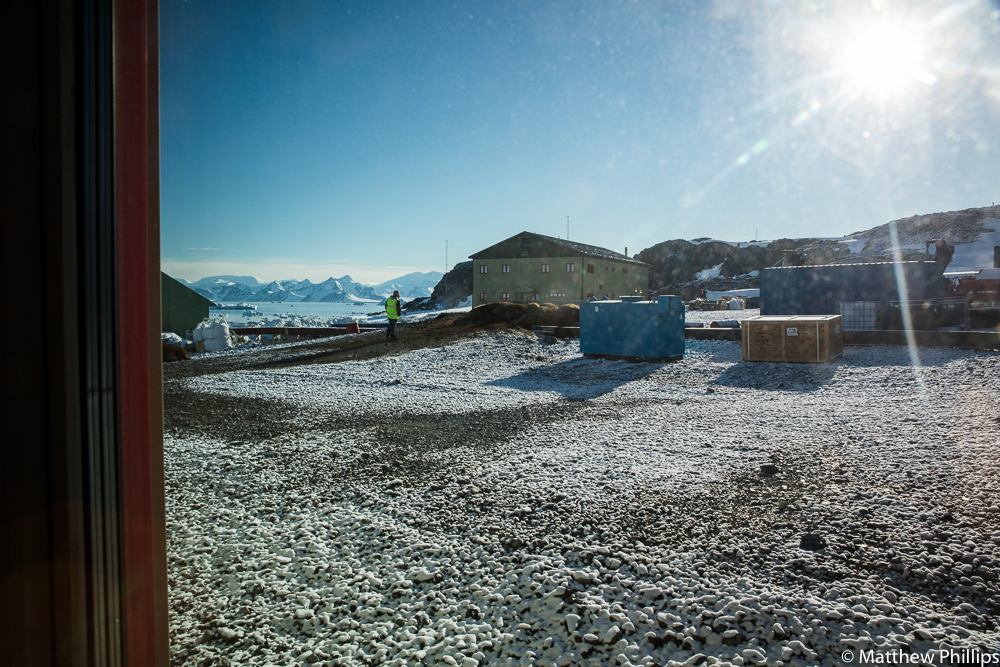 My pitroom this summer looked into the yard and wasn’t very far from a group of elephant seals who made a right racket – night and day! I’ve moved now, I’ll show you what it’s like in a future post. You can just see the elephant seals in front of the building in the centre of the shot.

Saz and Kate organised a Scalextric race night in the IKEA lounge. People keep complaining about that name but don’t come up with an alternative name… Any suggestions? Loungy McLoungeface? 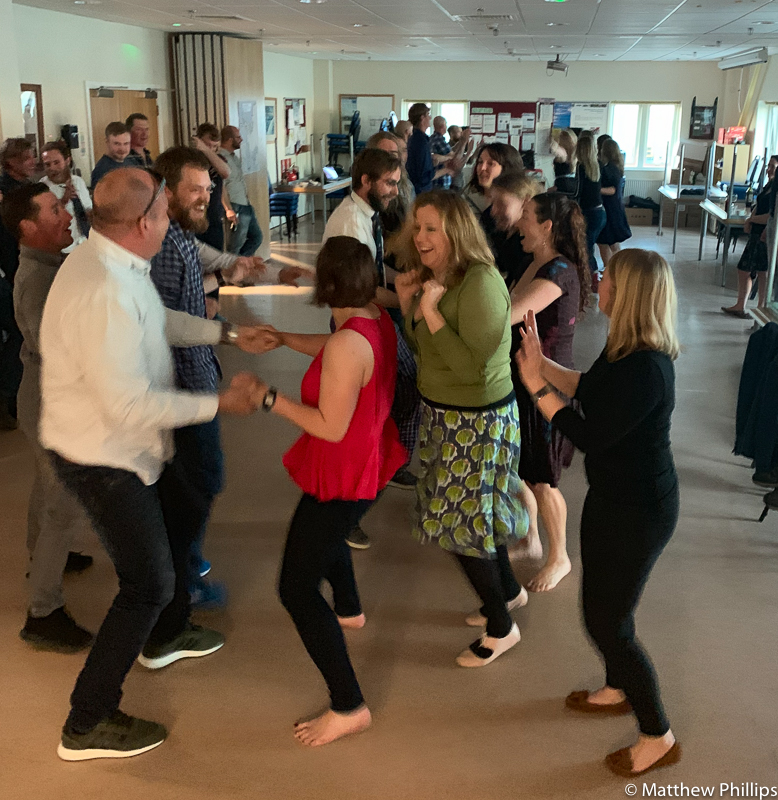 We had a Burns night towards the end of January (a couple of days after the 25th) which ended with a ceilidh. Everyone had fun but the majority didn’t really know what was going on. I should add that had nothing to do with Mairi or Dee who were calling the dances, more the steep learning curve most were experiencing. 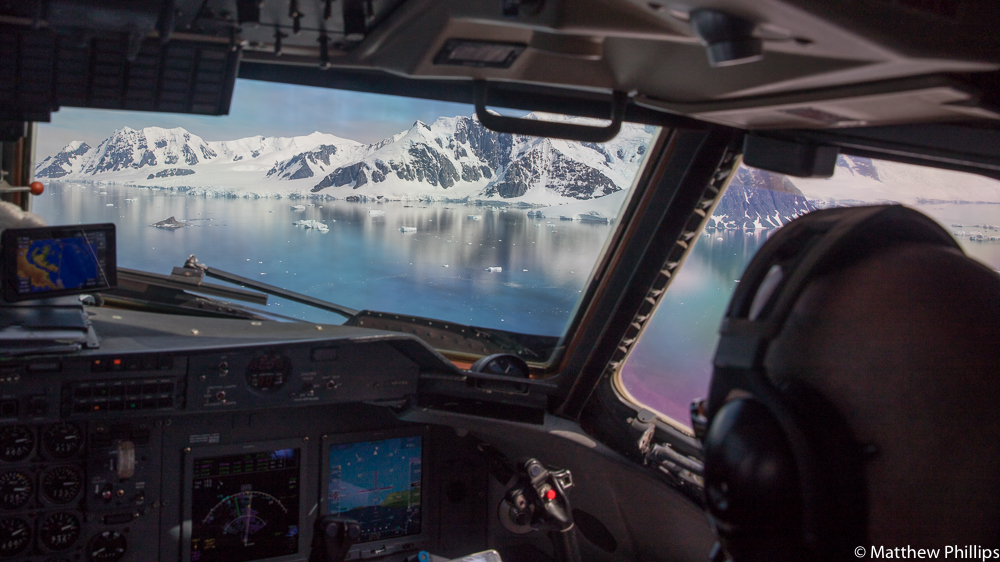 I’m on call pretty much all the time when I’m on station, my VHF radio (most common way to get a hold of someone on station) stays on all day and through the night. In the summer months I’m normally cornered by someone with a question before I’ve sat down for my breakfast (not a great idea if I’ve not had my morning coffee). Jess the Station Leader was great at getting me off station whenever there was a good opportunity. This was one of those occasions. HMS Protector (the Royal Navy’s ice ship and big sister to BAS’s RRS Ernest Shackleton) had been way to the south of us and found herself in some heavy ice that had slowed her down to crawling speed. They asked if BAS could send an aircraft down to see if they could find a ‘lead’ through the ice from an elevated position. So I got to jump on the Dash 7 for a trip to see if we could help them. 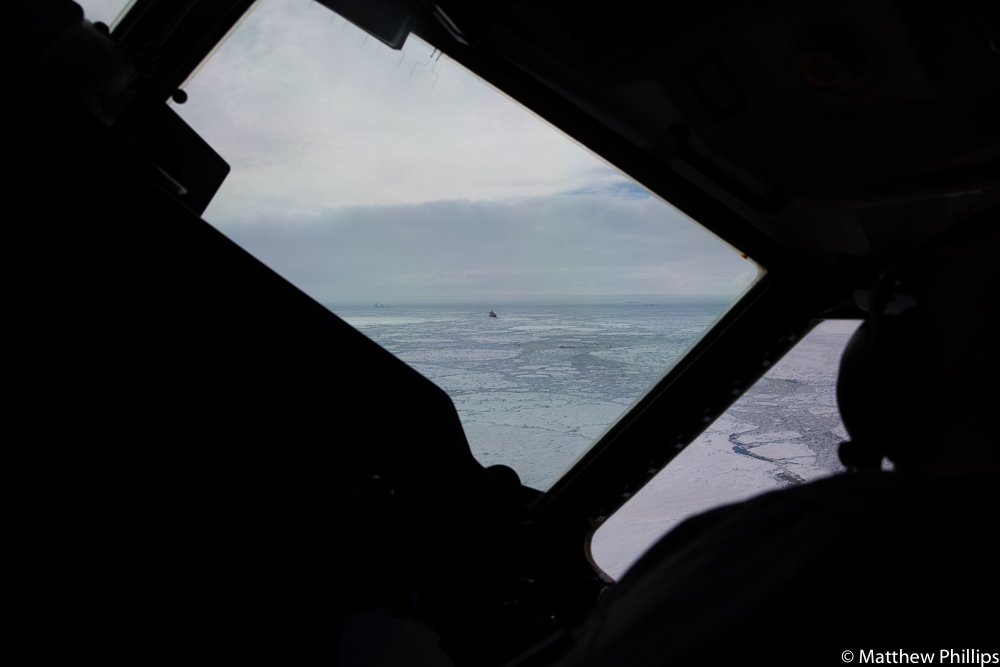 We managed to make radio contact with Protector an hour and a half south of Rothera. We dropped down to have good look at the ice that was causing them trouble. 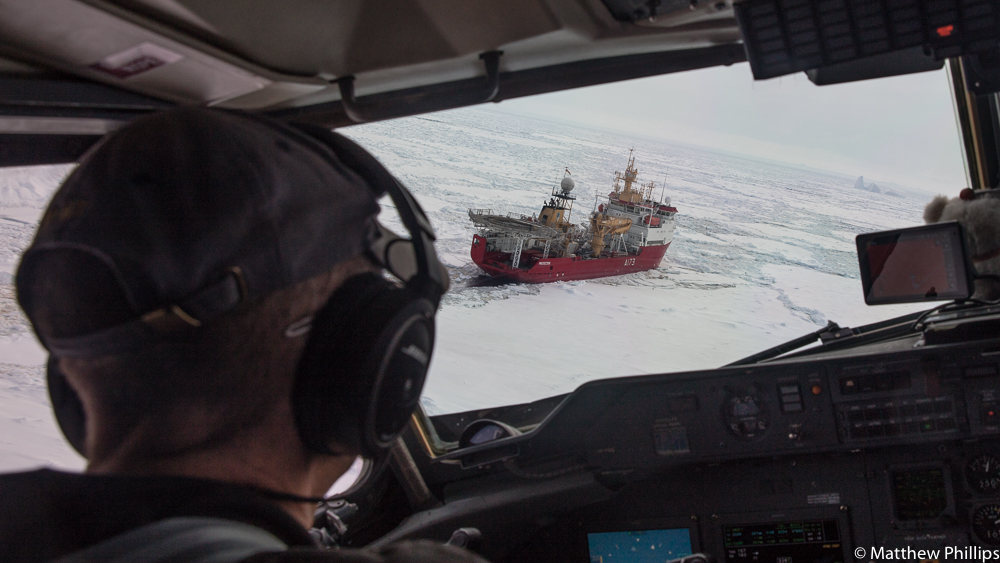 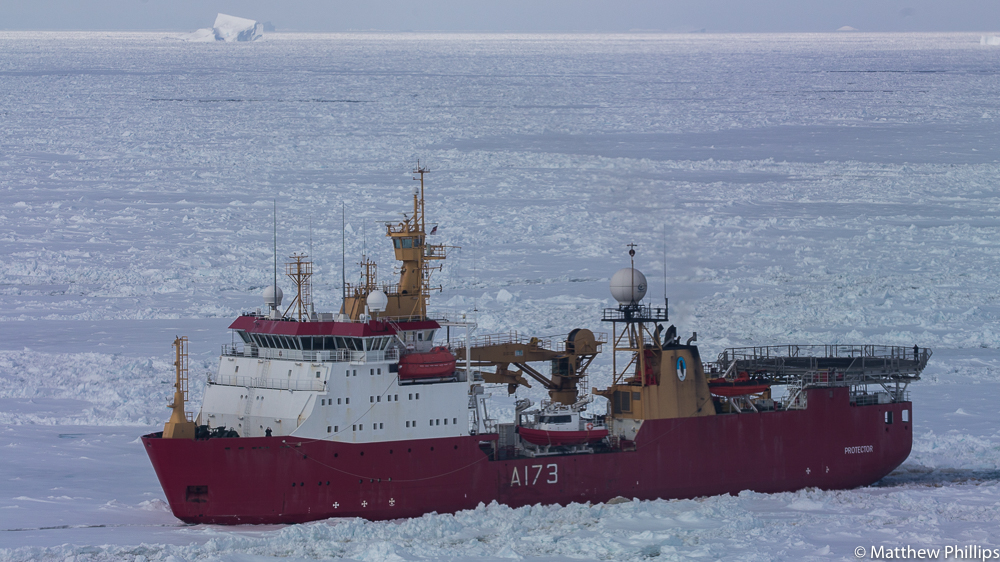 We flew around in various directions from their location but didn’t find much other than thick ice for about 70 miles all around. So we had to leave them to slowly work their way out. A few days later we heard they had made it to open water – think we worked out their progress at less than 1mph! 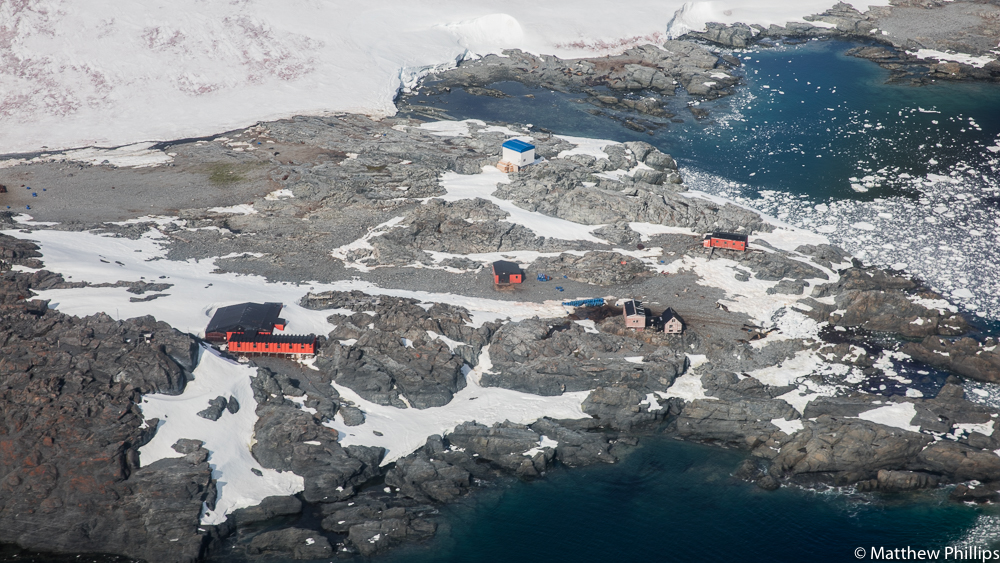 Rothera is on the east coast of Adelaide Island which has one other station, Carvajal. Only occasionally occupied, it’s a Chilean base that was transferred to them by BAS in the 1984. It sits on the southern coast, which is more exposed, so ship calls can be tricky. Hence BAS moved out. We couldn’t see anyone home on our way back north. 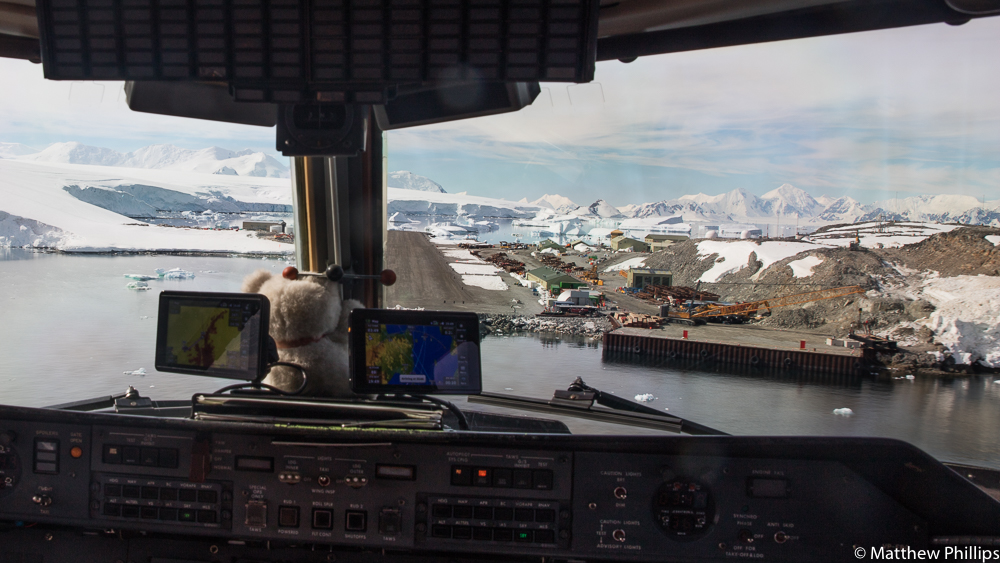 Coming back in to land we got one of the last views of the wharf before BAM started to excavate. One of the large crawler cranes can be seen just back from the front of wharf. The cranes became part of the Rothera skyline for the rest of summer. 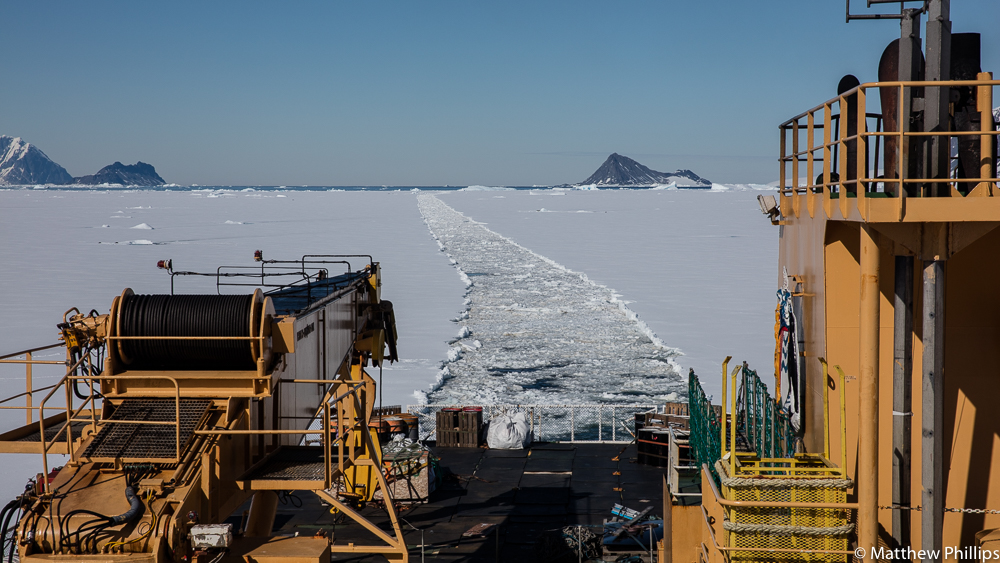 We were so busy in January that we had the Ernest Shackleton at our disposal for 10 days as a floating hotel (a flotel!). With people coming and going from the field all the time we had to put six people on board for several nights. There were several jobs to do in the local area so people who could manage a day away from station got out for a day trip. Given that it was my job to organise all the movements I made sure I got out for a trip too (sanity break). It’s not everyday you have an ice-strengthened ship at your disposal! 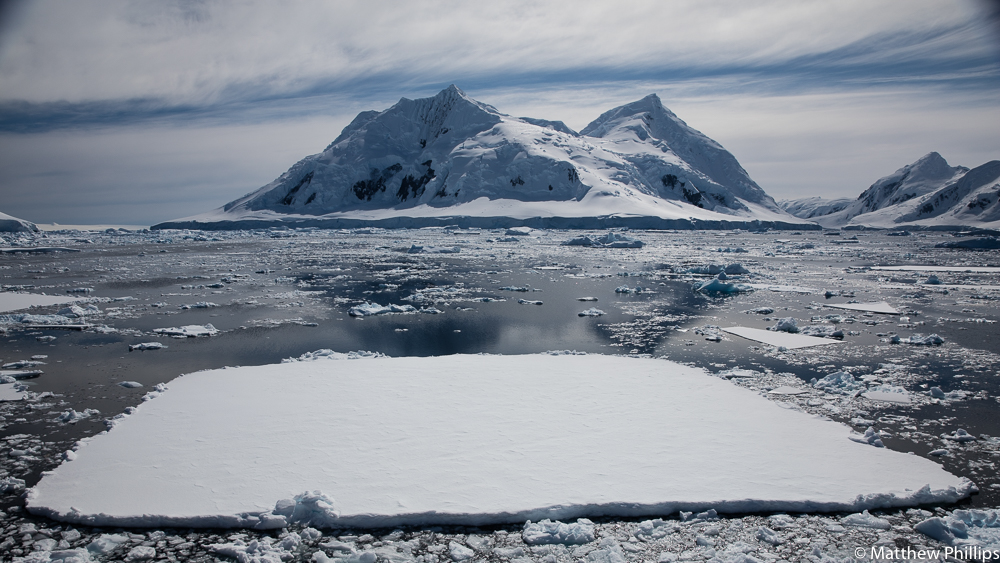 Between Adelaide island and the mainland is a small channel called ‘The Gullet’. It’s frozen most of the year and most of the tourist ships don’t make it through, though if they could they would! It’s something I’ve wanted to see for a long time. You can just make out the entrance to the right of the island in the middle of the shot. 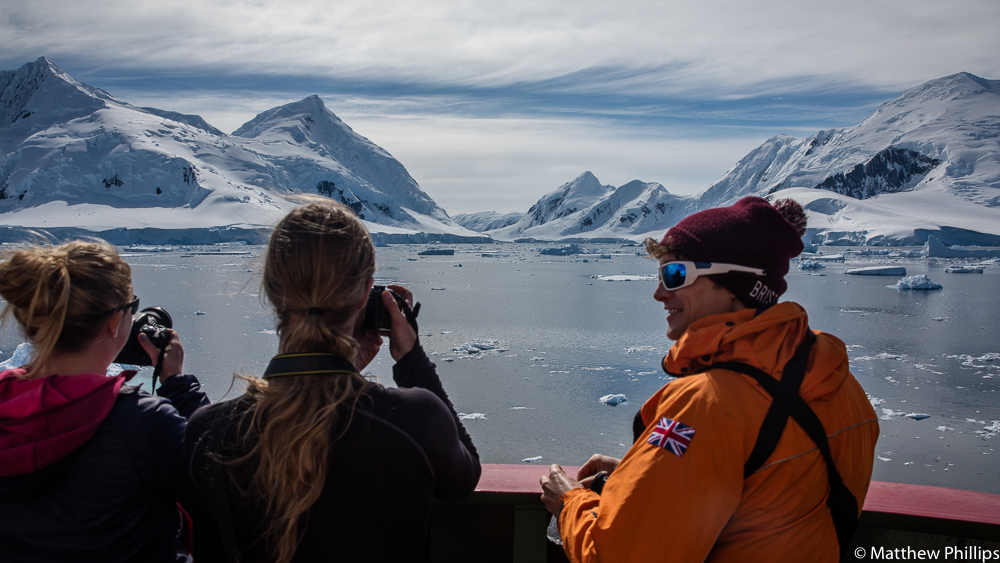 All the Rothera refugees were out on deck for this one, Alex and Steve (centre and right) were the electronic engineers this summer and are responsible for servicing 35 or so automatic weather stations (AWS) around west Antarctica. While most of those locations require a Twin Otter flight to the Antarctic interior, there was a station on a small island just north of the Gullet: a perfect job for the Shackleton. 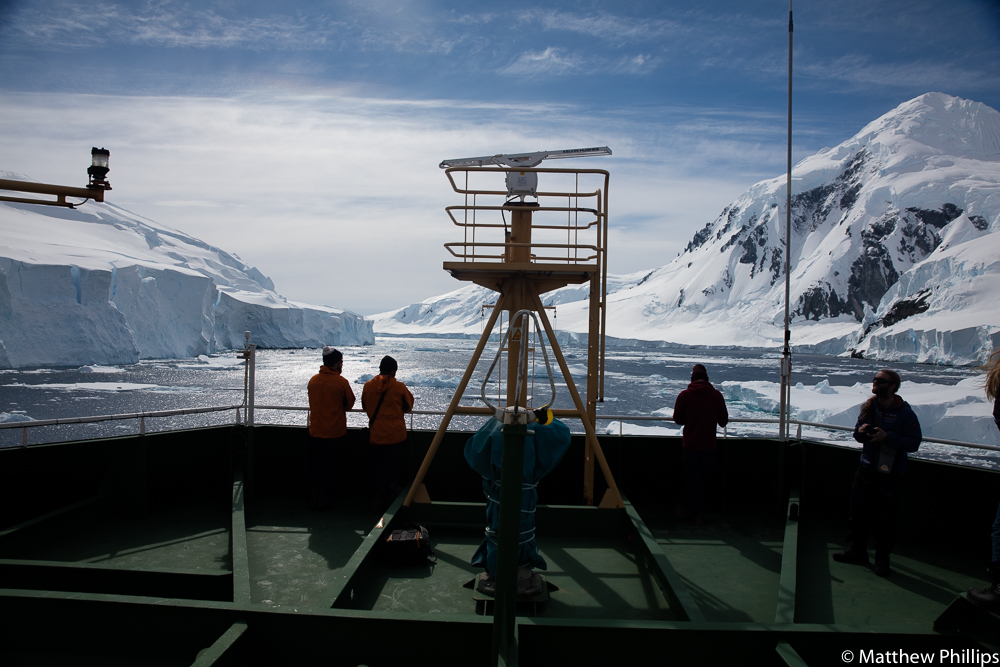 Up on Monkey Island (above the bridge) is a good place to get a view of things. It might not be possible to do justice to the channel with photographs. 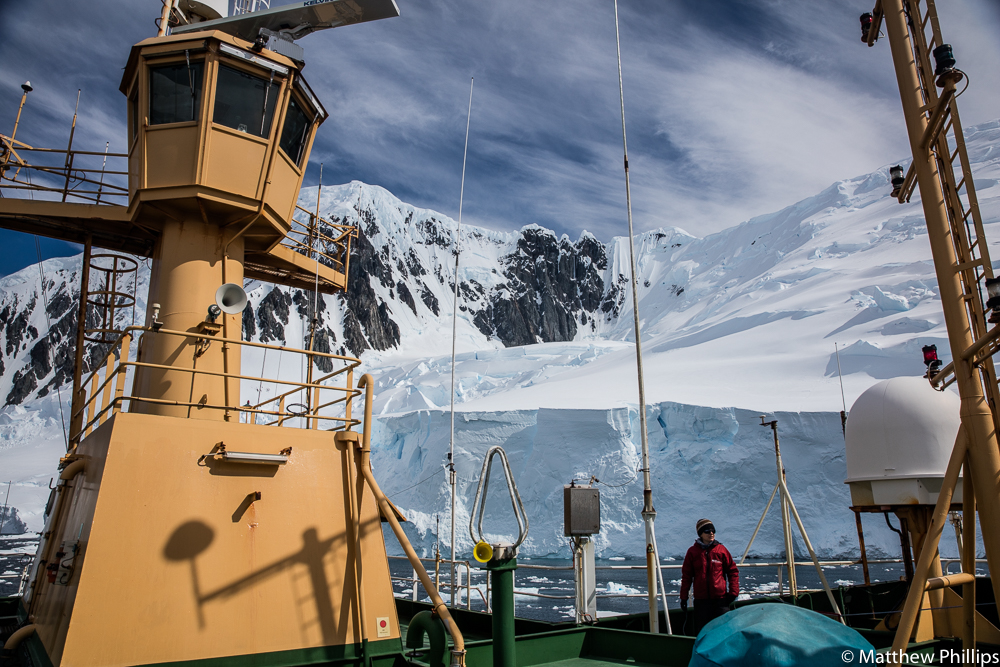 I consider myself very lucky to have seen and done some of the things I’ve been able to do but this was very special. 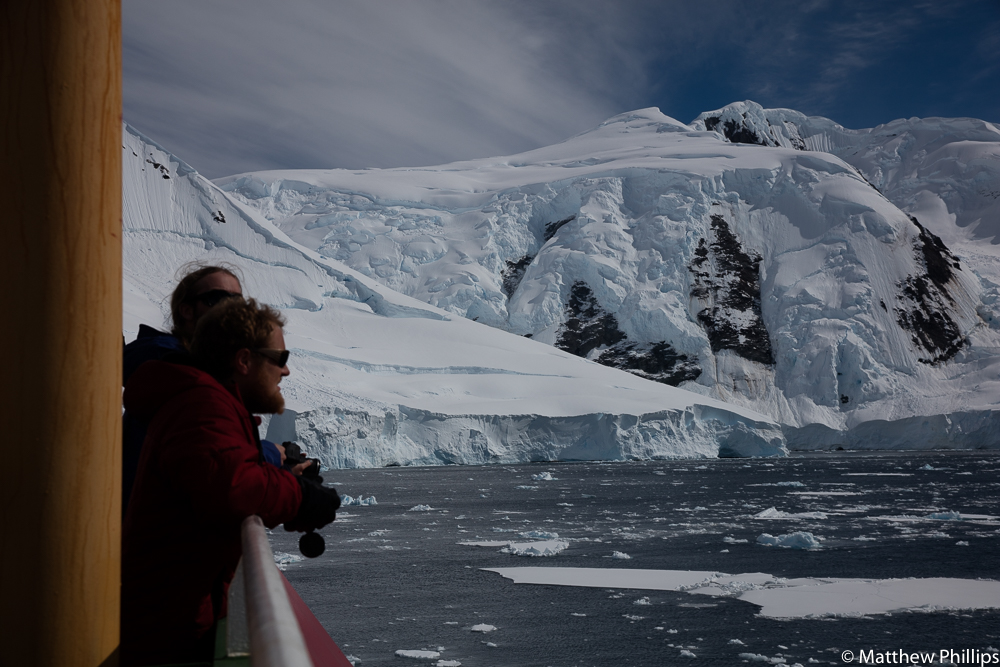 I think most of us were pretty blown away by the experience. 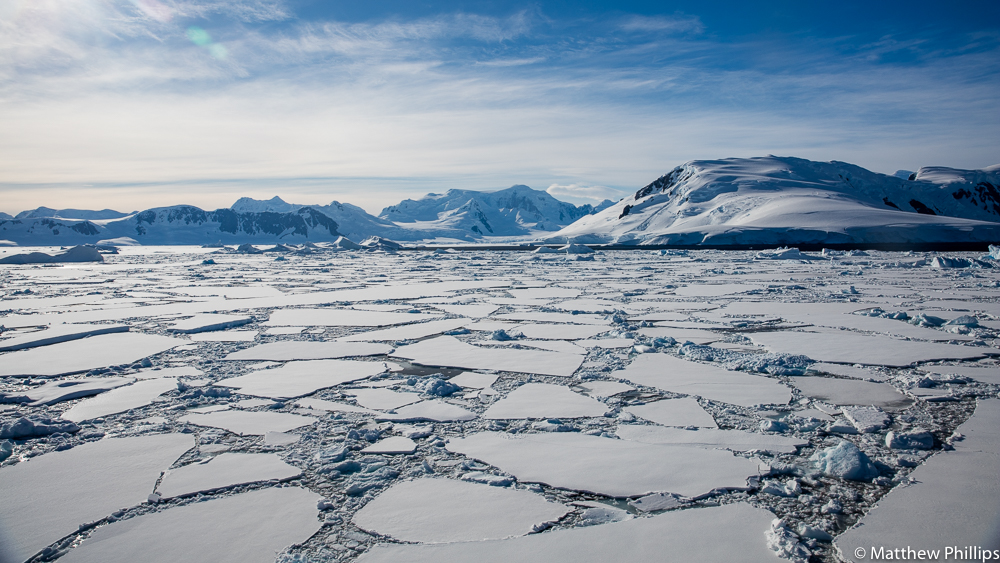 There was plenty of pack ice when we got out of the channel, a sign of things to come… 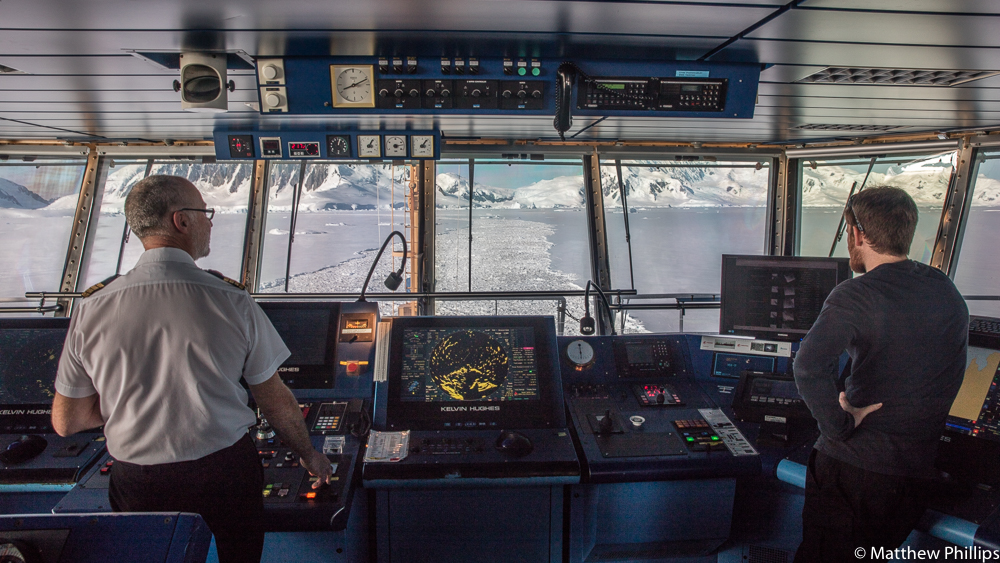 We soon found fast ice (ice that’s stuck ‘fast’ to the land) which meant we had to go into ‘ice breaking mode’. It sounds exciting and it is for the first 20 minutes or so. The process of ice breaking basically involves ramming the ice and, with some good timing, putting the engines in reverse before you get wedged in. If you get wedged you then pump ballast from port to starboard, or vice versa, to shake yourself loose. You’re lucky if you get 20m from each ramming run and you can be stuck for 1hr pumping if you really get wedged. Captain Harper (on the left) knows sea ice better than anyone I know and seems to take it all in his stride (I should add that he’s possibly the easiest going Captain I’ve met). He has a great tendency to turn around, laugh and say ‘oooppsss’ when he hits a chunk of ice that’s bigger than he’s expecting, even if it rocks or slows the ship and makes a heart stopping sound on the hull. 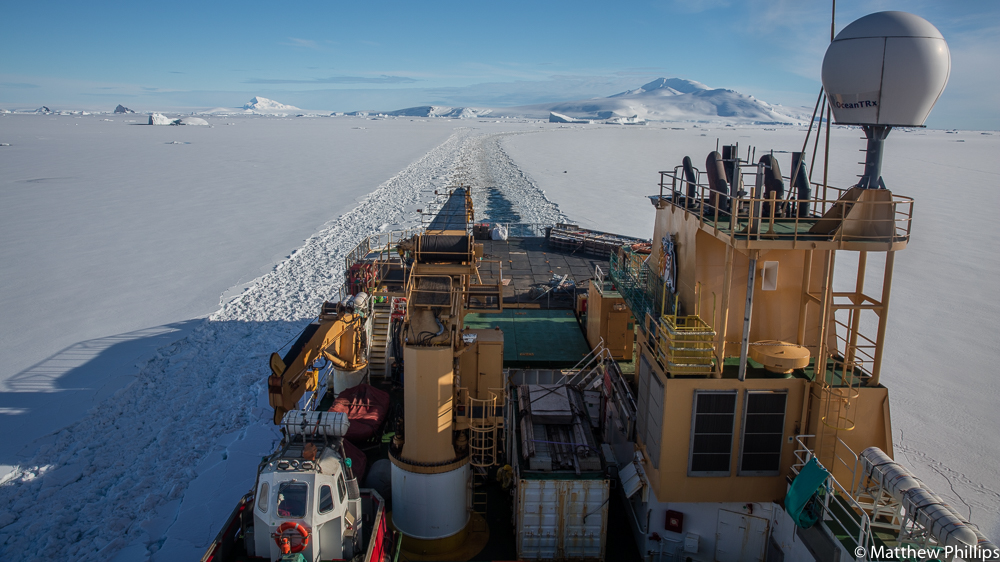 We found the little island with the AWS on it but the ice was too much with the time we had. So we had to turn tail and head back to Rothera. The AWS did get serviced later in the summer, not by a ship though. I’ll come back to you on that one in a couple of posts time. With the RRS Sir David Attenborough nearing completion the Shackleton, chartered to BAS for many years, was handed back to her Norwegian owners in April. I think most people at BAS are really sad to say goodbye to such a capable ship and I was always made to feel really welcome whenever I got on board. Getting to go through the Gullet on her was something I’ll never forget. It’s possible the Attenborough, which is about twice the size, will be too big and won’t be able to make it through. I stepped of the small boat that took us back to shore and was told I needed to do the scrub out-rota in the next 3 hours (a not so simple job of dividing everyone available on station into various groups to clean, tidy, move food and/or drink at the end of the working week, probably about 100 people in this case)… At least I’d had my morning coffee. 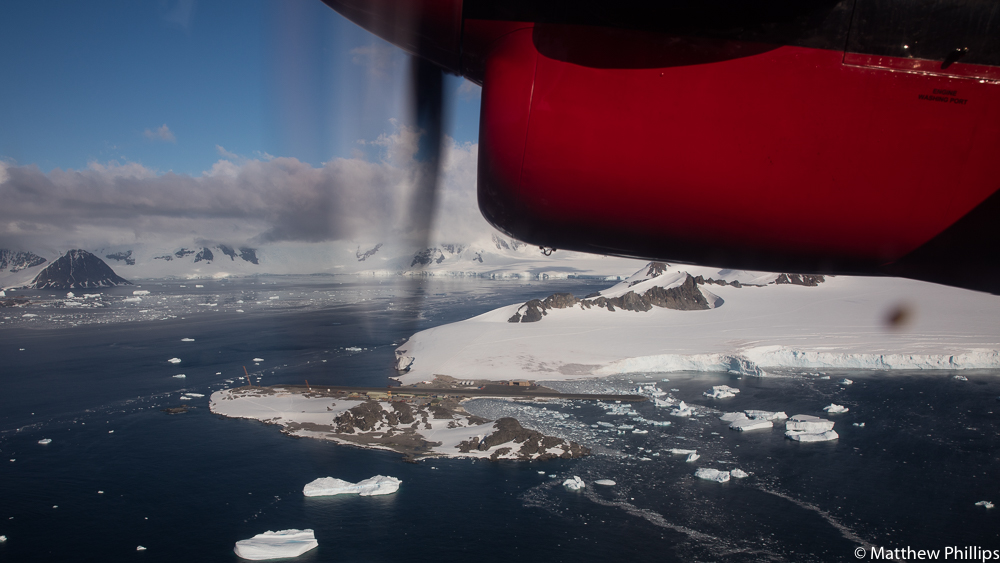 By the middle of February, I was possibly the most hard-worked and fatigued I had ever been. I think I’d started to develop the famous Antarctic 1,000 yard stare in the dining room during meals and break times. The stare normally signals someone who’s been south too long and/or is burning out. It’s often accompanied by a slack jaw and gaping mouth that makes you look like you’re trying to catch flies! With a month or so gap before the next ship call I had the chance to get off station for a longer period. I had to pack enough for a couple of weeks and take all my warm clothes as I was heading further south. Destination: Fossil Bluff.