Out with a bang.

As always the weeks before you leave base end up being a little manic. Packing, finishing off jobs and having a night or two with the other base members in the bar normally fill the time up. I’ve been home a couple of months now (so yes, this post is massively overdue) and doing DIY on the house and getting various real world personal admin jobs done takes up a frustrating amount of time. Personal admin included exciting things like – first aid courses, changing addresss with banks, revalidating commercial endorsements for my boating certs, TV licences etc. Basically all the stuff you don’t need to think about when you are south. And people ask why I like it so much?! 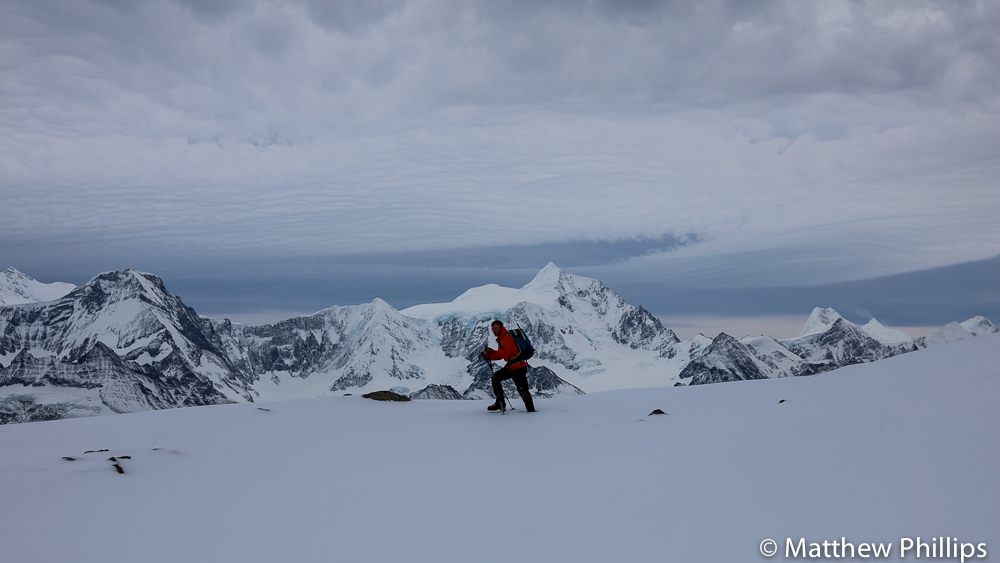 Neil, Jerry and I managed a few days away on the Barff Peninsula before I left. There wasn’t quite enough snow to go skiing but we did manage to get some peaks done. Neil in the foreground and the Allardyce range in the background. 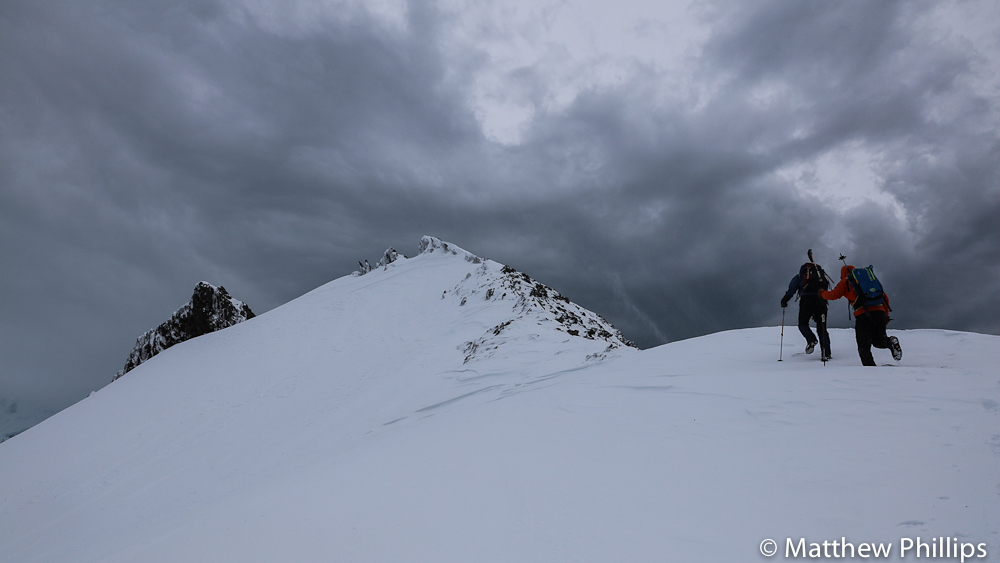 Neil and Jerry approaching Black Peak, the fourth highest on the Barff Peninsula at 807m. 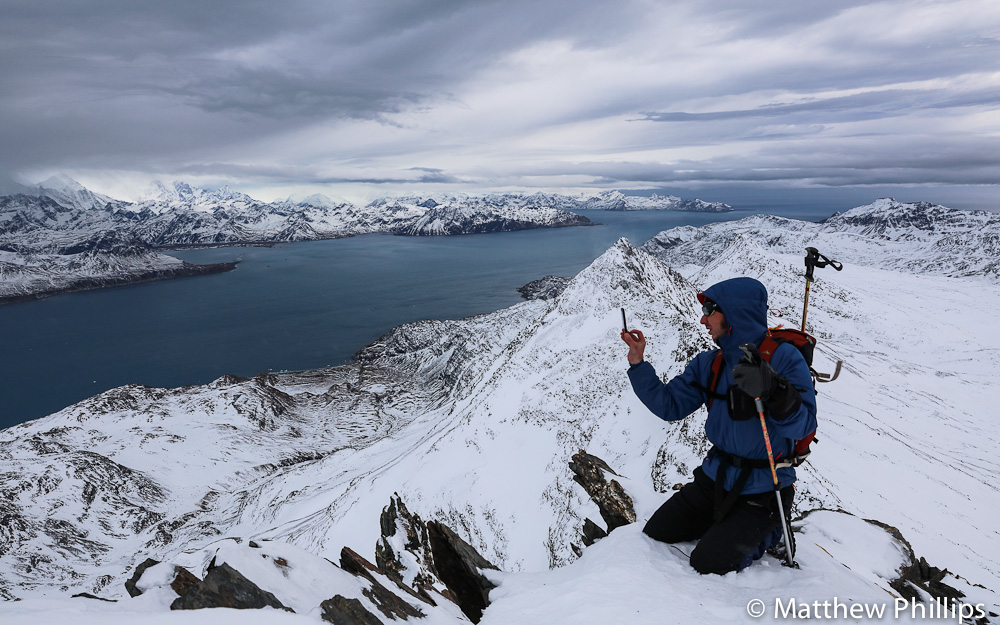 Jerry taking a shot on his phone. When I looked at this on my camera’s little screen it looked like Jerry was sticking his finger up at the view! 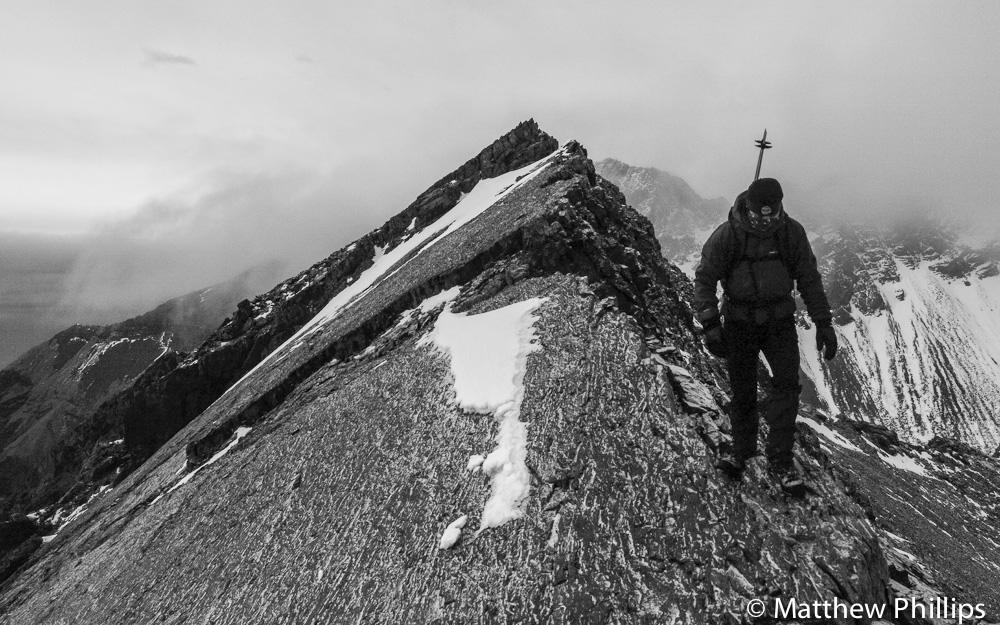 Jerry coming off the northerly peak that makes up Ranger Ridge. The high point of the ridge is only 409m but it’s some of the most technical terrain I’ve seen on South Georgia. We only managed about 1/4 of the ridge before we found a way off. 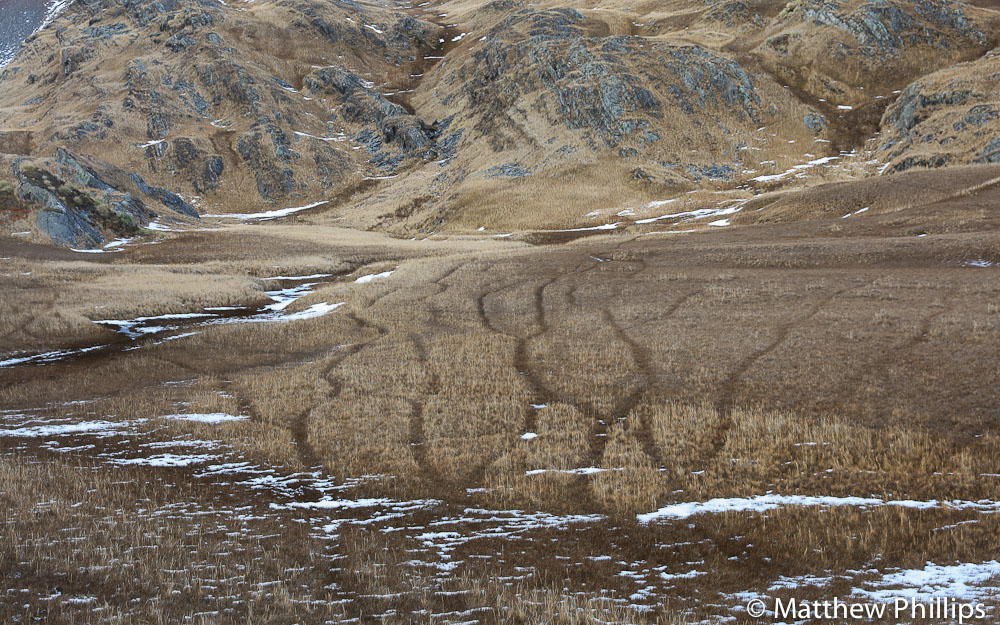 Heading back to the hut we passed a seldom visited area at the northern end of the Barff Peninsula. Reindeer tracks are still visible but no sign of them – they were eradicated a few years ago so that should be the case. 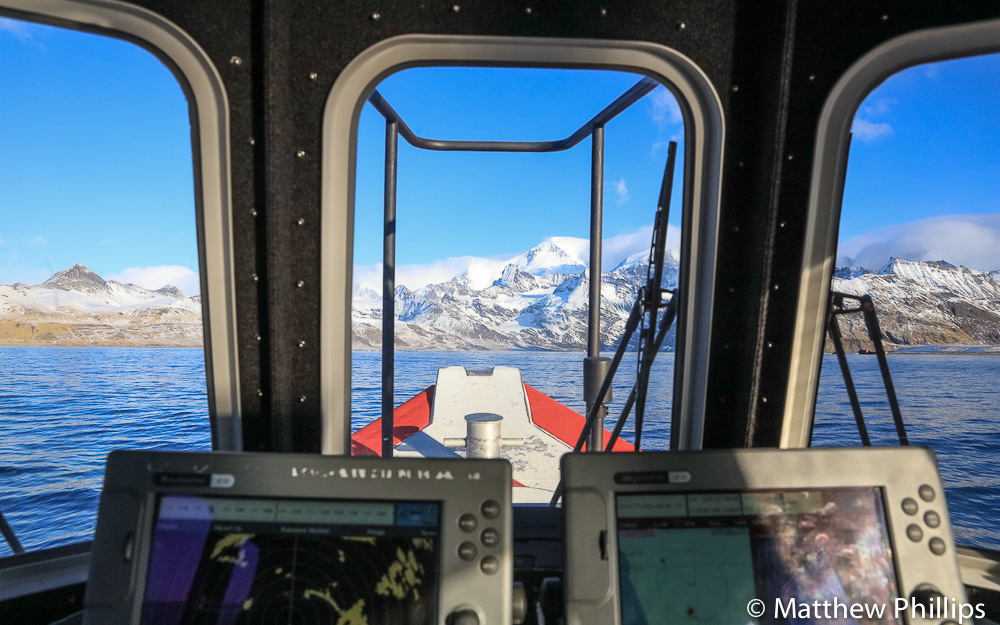 What a great job when this is your office! 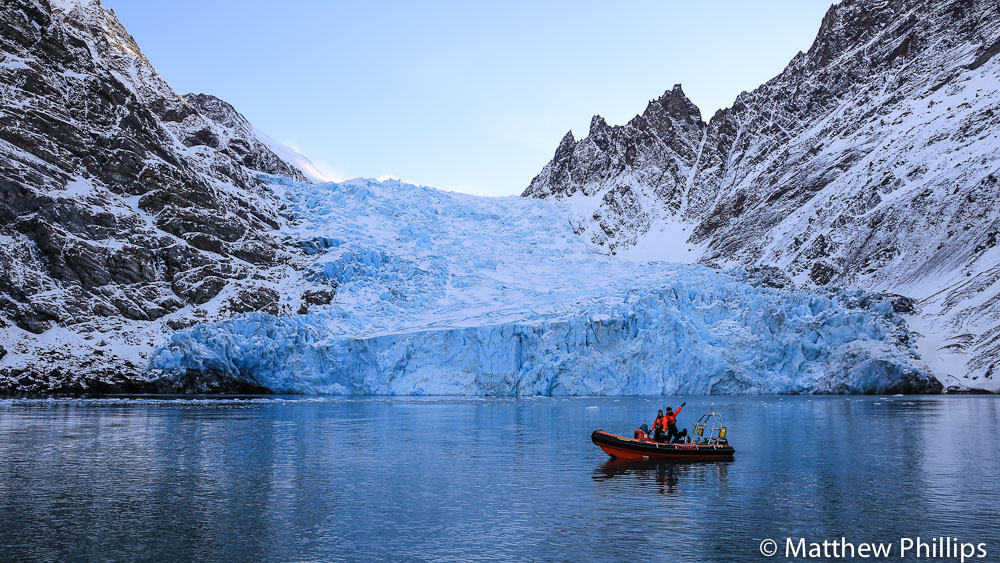 The Hamberg Glacier at the bottom of Moraine Fjord. The glacier has actually advanced in the last couple of years, there was a waterfall coming off the rocks on left hand side. You can just make out the rocks that are above the face of the glacier where the waterfall was. 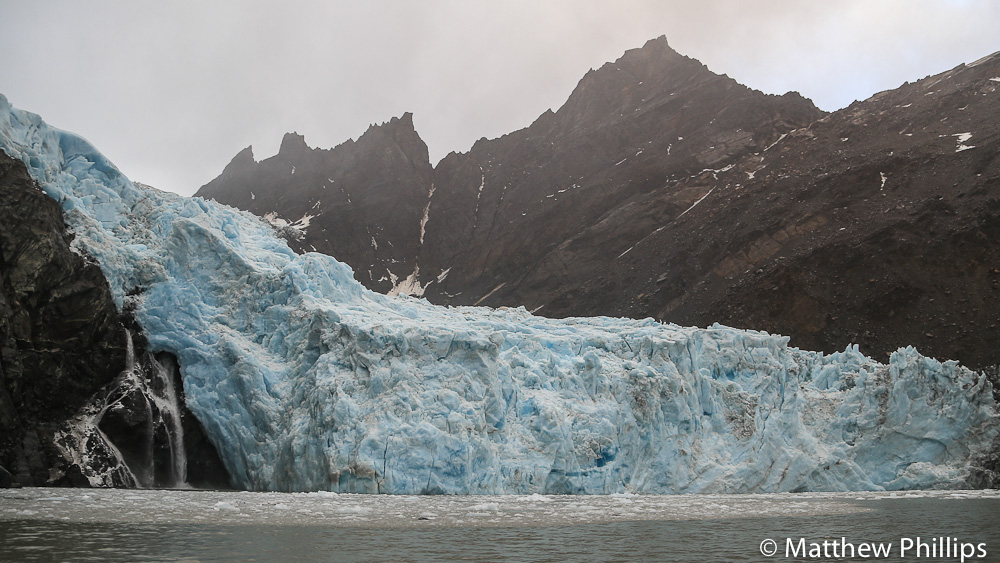 Here’s a photo from May 2015 with the waterfall. It’s from a different angle but you can tell it’s definitely advanced 30-50 feet. 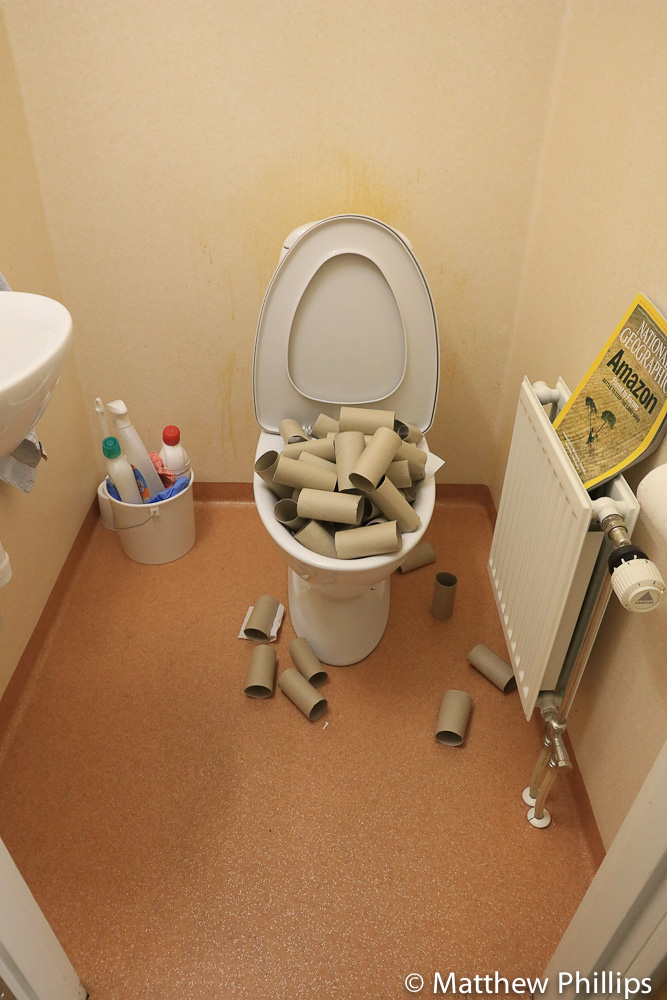 It’s a bit of a tradition to play a prank or two as you leave. The last few years I’ve been vocal about people leaving finished toilet rolls in the communal toilets. Usually venting my displeasure by blue-tacking the roll to the whiteboard and leaving a message along the lines of ‘this belongs in the bin… your mother doesn’t live here’. So this year I saved up all the used ones I could find and then deposited them in one of the communal toilets the morning I left. 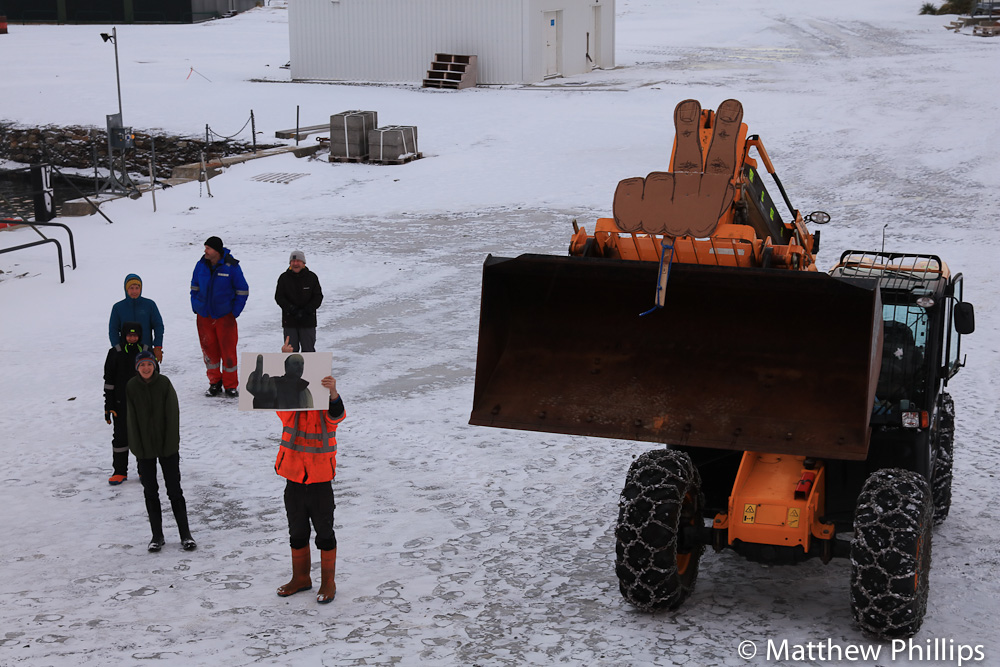 I was given a lovely send off. I think this was done in good humour rather than a sense of good riddance! 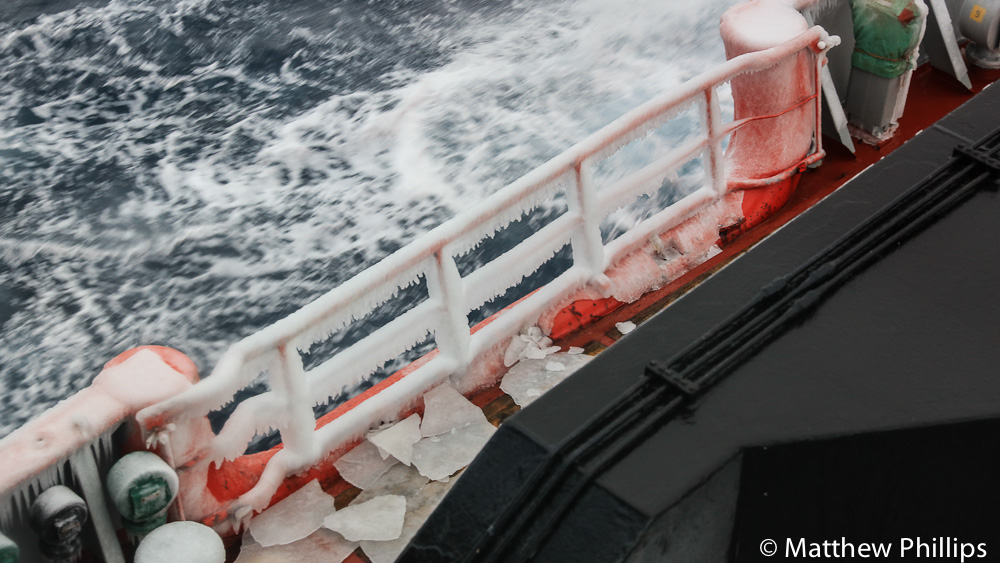 The journey to Stanley in the Falkland Islands was a mixed bag. The first few days were calm enough but those fortunes soon turned. The deck and bulwark soon became encrusted in ice. 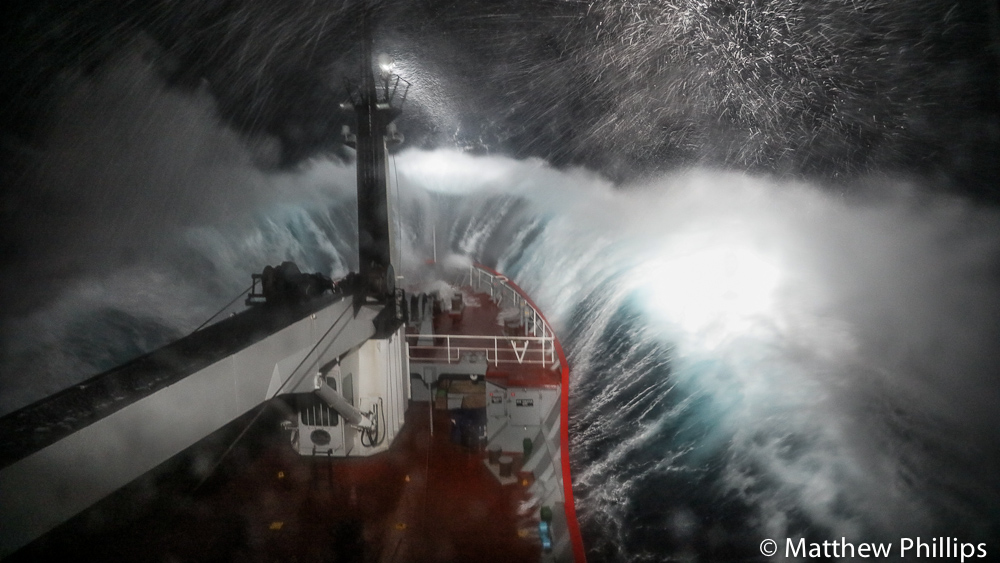 That night the wind picked up, I could feel the ship shudder while lying in my bed, so I headed for the bridge to catch some of the action.

Surprise, surprise – I’m currently back on South Georgia. Only for a seven week period as part of the South Georgia Heritage Trust Habitat Restoration team – basically we are looking for rats. I should have a blog post or two out before Christmas to explain more.